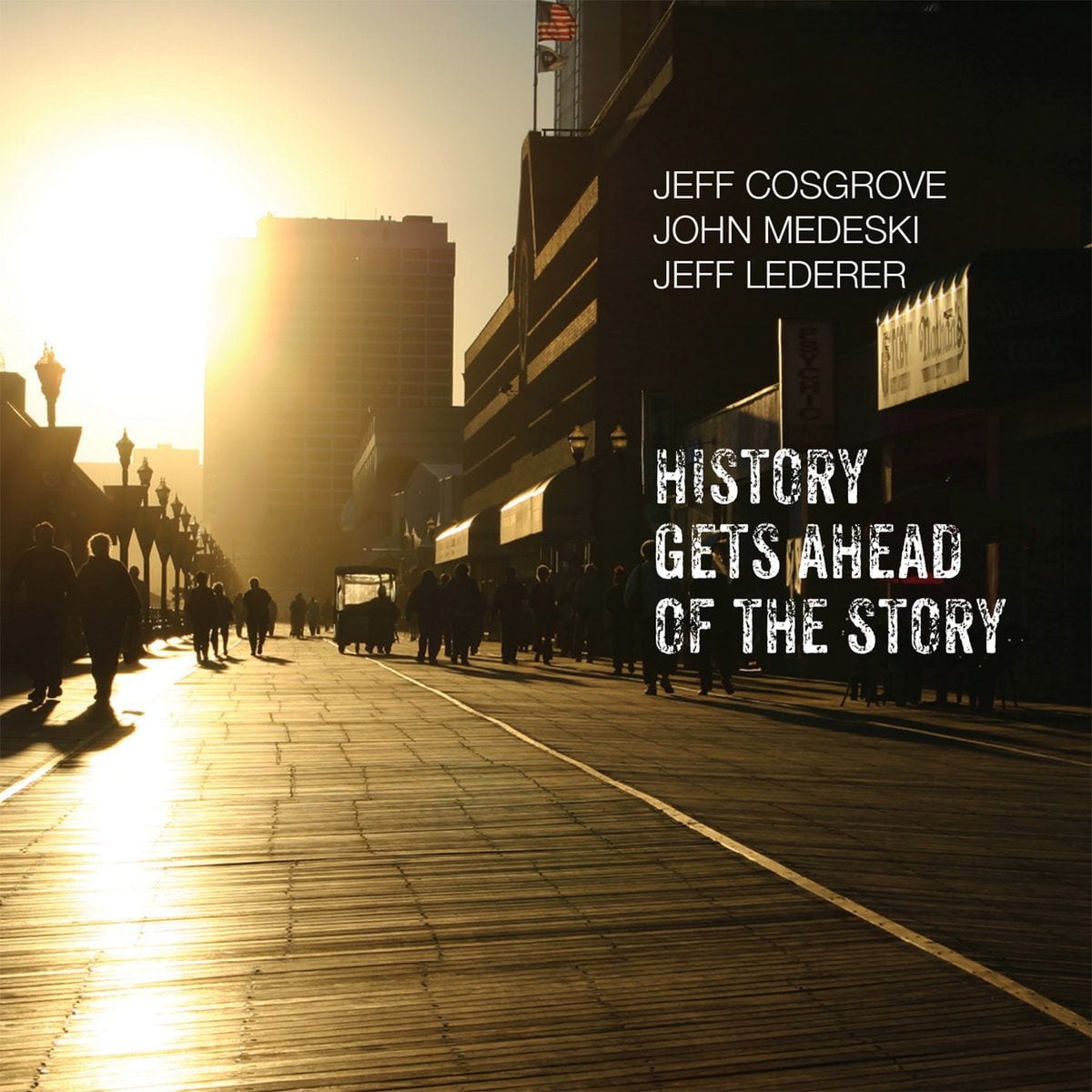 On History Gets Ahead of the Story, Cosgrove devotes the bulk of a new program to the hip compositions of Parker, enlisting the help of Lederer and famed organ-whiz John Medeski, who plays with Lederer in another drummer-led ensemble, Matt Wilson’s quartet. Although Parker often engages in free improvisation not based on pre-written composition, his body of written work is, in fact, much larger—and it is as often fully tonal, blues-based, and grooving. Cosgrove, similarly, has played plenty of “free” music, but he is grounded in rock, blues, and more traditional jazz as well. The program on this release is hardly traditional, but fans of Parker’s grooving recording’s such as O’Neal’s Porch and Raining on the Moon will find much of that spirit here,

But Cosgrove is wise enough to transform the tunes and to do it with the help of distinctive partners who know inside and outside playing, both. The result is a set of performances like “Harlem”, a lazy swinger that lopes a delicious bluesy melody in a minor mode, opening up tons of room for mischief while still keeping everything down-home. Lederer is out front with his tenor saxophone, with Medeski joining the melody in unison as it jumps up an octave. As ever with the organist, he is interested in some sonic exploration, using his stops to create eerie, buzzing tones that create textural contrast with Lederer’s noble, classic tenor sound. Both take solos, with Medeski’s fuzzy, spiky overtones critical to both sections. The players stay largely within blues tonality, but they are free and expressive there—improvisers who rarely lean back on cliches.

Lederer works with soprano saxophone, clarinet, and flute on various pieces. “Little Bird” seems appropriate for the flute, and it begins with Lederer and Medeski playing keep away on the opening, with the organ stops also in the flutey range. The theme, when it comes, is boppish and playful, as is every member of the trio throughout. Cosgrove taps and syncopates like one of the Nicholas Brothers on his cymbals, as light and crisp as can be imagined. Medeski works his hands in counterpoint to his pedal bass line, always surprising, and then Lederer’s solo is even more exciting: flurries of notes that push the whole trio to greater interaction. Cosgrove solos here as well, concisely, each player seeming to evoke the tune’s title but in ways you might not expect.

The great bulk of the other Parker compositions unfurl with a hearty, mainstream appeal, though frayed and sparked to enjoyment by these new voices. “Corn Meal Dance” is a slow soul-burner of a tune, opening with an organ/tenor gospel intro with tempo, then kicking into a loping 6/8 groove that lets Medeski play his B3 at maximum moodiness as he shadows the hip melody. Over time, the tempo stays the same, but the heat on everything rises deliciously. “O’Neal’s Porch” retains its glorious straight-ahead swing as well as its ability to inspire supremely soulful solos that eventually slide into a crackling collection improvisation that gives up its sense of even time… and then locks right back into it.

“Moon” swings similarly over a set of four descending chords, with Lederer soloing with puckish fun on his soprano sax and another ending that surprises, with organ and soprano playing a sputtering ensemble figure that the leader can improvise around. And “Wood Flute Song” provides a somewhat craggier melodic cell to Lederer’s clarinet and Medeski’s organ, which they repeat a few times before moving into improvisations that are somewhat less moored to a set time signature or harmonic pattern.

In many ways, this is exactly where the band comes into its own. When given a bit more room to stretch out, these fellows have no trouble finding their own structure. “Things Fall Apart” is a free improvisation from a William Parker source, but it sits amidst its somewhat more tame recording-mates with ease. Lederer’s soprano makes as much melodic sense here as in the more blues-based tracks, and the huge ears of each player, as they work together to create something logical if spontaneous, is a wonder. And it’s concise at just four-plus minutes.

The bandmates contribute originals as well, also slightly more expansive that the Parker classics that they complement. Cosgrove’s “Ghost” is a marvelous ballad for Lederer’s woody clarinet sound, with a slow-developing melody that unfolds over a bed of otherworldly organ. It is so natural and in-the-moment that I’m not sure which parts of it were written and which were improvised, but it all sounds like a carefully structured thing, a building that blends in its landscape, for example.

“Purcell’s Lament” is also a ballad, with soprano saxophone negotiating a beautiful melody that takes advantage of that horn’s “snake charmer” reputation. “Gospel Flowers” is a waltz groove that will remind many people just a bit of Coltrane in his “My Favorite Things” mode. Although, it comes with a neat harmonic turnaround and Lederer uses his tenor sax to hint at just about every player other than Coltrane (and then, yes, Trane too—because how can you not?).

But this notion is perfect for History Gets Ahead of the Story, a recording that embodies the art of William Parker not only in remaking a body of his songs but also by spinning off from the body to create new things that mutate and grow on their own, inspired by his influence, but finally wider than any single inspiration.

Each member of this trio ought to be near the top of some “talent deserving wider recognition” list. Medeski, of course, is hardly unrecognized, with Medeski Martin and Wood being a serious jam band phenomenon with a huge following. But, with Medeski coming in only fourth in the recent Downbeat critics poll as organist, I’d like to suggest that he is more of a monster than folks realize—a player whose creative music chops, jazz skills, improvisational daring (whatever you want to call it) is mammoth. He deserves to be seen as a truly creative artist, as well as a world-class groover. Lederer is a multi-tooled wind player with ideas from here to the window—and this recording lets him carry a load that matches his creativity.

And Jeff Cosgrove is a guy living not just outside New York but beyond almost anyone’s notice. But he is the quiet creative presence behind the idea of this album, a peer of some of our best artists, not just Medeski and Lederer. He’s subtle and shaded, and never less than superb on History Gets Ahead of the Story, a recording I can’t stop spinning and spinning. My head is happier because this recording gets the balance between freedom and home just right.