Let's Go (So We Can Get Back)
Jeff Tweedy
Dutton Books

The rock memoirs we’ve become accustomed to are mostly from musicians in their last act, or whose most popular work is long in their past. At mid-life, Jeff Tweedy seems too young to write his life story. Too young, but also too active. As a solo artist, producer, and as a member of Wilco, the band he formed in 1994, he’s released new music at the pace of better than an album per year for the last several years. If you’re subscribed to the Wilco email list (does anyone under 40 even subscribe to email lists?), you seem to get announcements about tour dates, new albums, or Wilco reissues every few weeks.

Tweedy seems busier than he’s ever been, and while Wilco may be on the backend of their most popular work, he and the band don’t feel past their prime by any means. Perhaps it’s that they’ve created a niche where they’re able to thrive, or perhaps it’s the amount of talent in the band, but even though Wilco has been with us for a while, the band seems far from being out of surprises.

The story Tweedy tells in his memoir, Let’s Go (So We Can Get Back), is different than most rock star memoirs, as well. There are no road stories, no minglings with celebrities, and there’s no dirt. He shows little patience for rock star myth-making and displays a staunch and sincere refusal to elevate his artistry. To this end, too, he works to make his well-documented struggles with prescription painkillers as unglamorous of a part of the story as he can. “When you take a lot of Vicodin,” he writes in the book’s introduction, “your life is not a nonstop Algonquin Round Table. There’s a lot of being numb, and a lot of being sad that you’re not numb.” It’s heart-breaking stuff, made even more so because Tweedy’s addiction problems stemmed far less from a taste for hedonism than from a deep well of pain and self-doubt that found an outlet, thanks to indulgent hangers-on.

While he makes it clear early on that he understands his fans will want his take on his musical legacy, particularly the story of his work with two collaborators, Jay Bennett and Jay Farrar, with whom his music is often associated, he shows no enthusiasm for settling old scores or staking out new claims. “I can’t remember shit,” he writes, and admits to not being “naturally nostalgic or prone to reflection.” These are not traditionally the makings of a great memoirist, but Tweedy succeeds anyway.

Born in Belleville, Illinois, his childhood comes off as stable, even if it was marked by its own particular dysfunctions. The word he chooses to describe this period of his life is “mauve”. “Think of a smaller me, and then picture the color mauve,” he writes, “and you’ve conjured my childhood in a nutshell.” While his mother both needed and indulged her son too much, and his father both worked and drank excessively, by Tweedy’s account, they provided him with a supportive, if unspectacular, upbringing.

His early years were not without their good fortune, though. While still a child he’s handed his older brother’s record collection, a collection that just happens to be a music enthusiast’s dream. By the age of nine, he writes, “I went from not being entirely clear on the difference between the Beatles and the Monkees to spending entire weekends listening to the electronic space music of Isao Tomita and losing my grip on reality to Edgar Froese, Atomic Rooster, and Hawkwind.” His good luck continues when he discovers an adventurous record store three blocks from his house that helps him dive deeper into punk. “Everybody wants meaning in their life and we all find it in different ways,” he writes. “For me it was buying records.”

Unlike many young musicians who need to bust away from their small-town lives to find community, Tweedy meets Jay Farrar, the partner who would come to define the first part of his musical career, in his ninth-grade English class. The band they form, Uncle Tupelo, introduces him to touring, recording, and record contracts, and would go on to gain their own cult fame.

Some readers will undoubtedly be looking for new details on the band and their notoriously noxious break-up, but I don’t think they’ll find them. Tweedy addresses accusations related to the band’s final days made by Farrar in an interview he gave withRelix magazine in 2004, but in some ways, he needn’t bother. It’s mostly juvenile stuff, and Tweedy treats it accordingly. He spends as much time on the break-up as it probably deserves, and while he accepts blame, he’s more than willing to share it. The kind of success enjoyed by Uncle Tupelo should inspire memories its co-founders can happily recline in together. Simply put, it does not.

Tweedy’s childhood and time in Uncle Tupelo takes up the book’s first half, and its second is packed with more activity than he can fully do justice to. It’s a whiz of a read, and it’s where he finds his footing as a writer. He drops the occasionally jokey approach that inserts a sometimes uncomfortable distance into the book’s first 100 pages and settles into a more direct approach for telling the story of his adult life and the creation of the band that brought him wider success.

Before turning 30, Tweedy had given up alcohol for good, gotten married, and had his first son. By the time he was in his mid-30s, Wilco had produced the albums that many of the band’s fans most closely identify them with: Being There (1996), Summerteeth (1999) and Yankee Hotel Foxtrot (2002). The book’s subtitle, A Memoir of Recording and Discording with Wilco, Etc., suggests an inside story of the band, but while he gives some details, it’s his relationship with his family that most clearly comes into focus. 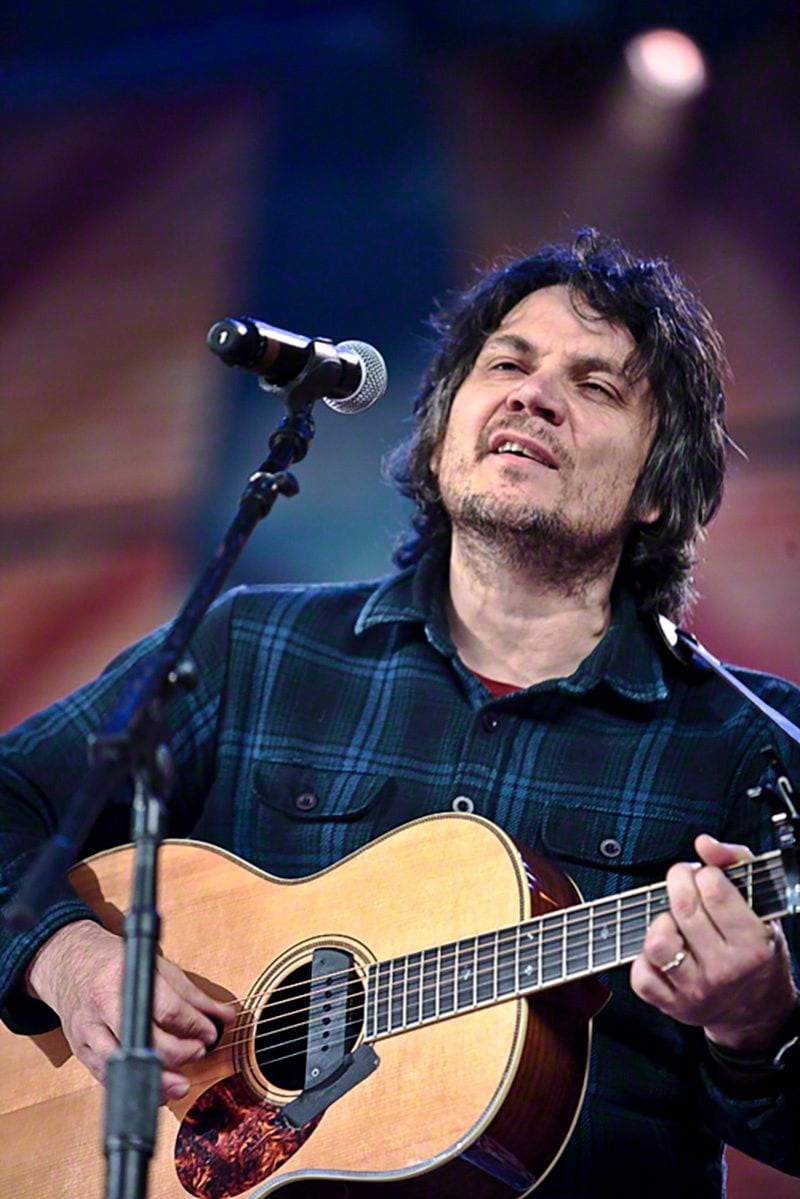 The most Wilco-related space is dedicated to discussing his relationship with the late Jay Bennett, who died in 2009. “Working with Jay created possibility,” he writes, an incredibly touching way to look back on a collaborator. He opens up, too, about the circumstances that led to Bennett’s dismissal from the band, as well as the axing of drummer Ken Coomer, whose hard-hitting style defined Wilco’s early sound as much as the more mannered style of Glenn Kotche, Coomer’s replacement, defines their later records. Tweedy is direct and unsentimental about his building and then unbuilding Wilco’s first iteration. As he puts it, “it was a difficult time.” It’s easy to take him at his word that it’s all that needs to be said about it.

In that way, Let’s Go (So We Can Get Back) seems to function as his way of tossing overboard the deck chairs of his musical past. “I get it when Wilco fans are still angry at me about Jay Bennett,” he writes at one point. “I don’t like it, but I understand. They don’t think Wilco is as good now as it was when Jay Bennett was still in the band, because he’s on all of the Wilco albums that mean the most to them.” He seems perfectly happy to leave it to others to sort out the detritus. His interests lie in unapologetically and unselfconsciously clearing space to continue to create music and survive as an artist.

The albums that mean the most to Tweedy, it becomes clear, are the ones he’s currently working on. It explains, I think, why he includes so little about the inner-workings of the band’s current line-up. That he doesn’t go into detail about his 20-year relationship with Wilco bassist John Stirratt, for example, is neither here nor there. Their relationship has resulted in over a dozen albums and counting. What more need be said?

The same too goes for his much-written-about struggles with prescription drugs. In asides with his wife, he debates how much of the story to include in the book; if, for example, admitting to, in the depths of his drug addiction, stealing the painkillers his mother-in-law had been prescribed as part of her cancer treatment, is too much. These asides are an effective device and allow him to get at hard spots in his past through a side door. They also help bring his wife, Sue Miller, to life in the narrative. “The way I feel about Susie, the way she’s loved me and changed me,” he writes, “it can’t be in my songs. It’s too big for songs.” That he manages to pull off communicating his feelings about her outside of his songs feels fitting.

Memoirs from the significant others of popular musicians are rare, particularly when the significant other isn’t also an artist of at least some renown. But by the end of Let’s Go (So We Can Get Back), you get the sense that Miller could produce her own book that might be particularly meaningful to people who have shared some of her struggles. Tweedy is able to write around the edges of her role in supporting their young family through his addiction recovery and life as a touring musician, about her own history in music as the booker for Chicago’s fabled Lounge Ax, and her fights through multiple cancer treatments. What he includes leaves you, intentionally or not, hoping to eventually hear her take on the story.

“In recovery they tell you that sobriety isn’t something you keep by keeping it to yourself,” he writes in the book’s epilogue. Jeff Tweedy’s life has been marked by its collaborations, from bandmates capable of stretching the possibilities of his songs, to a wife and children whose love has persevered through more struggles than any family should have to bear. Far from a typical rock memoir, Let’s Go (So We Can Get Back) is an engaging story of personal and artistic collaborations that sometimes fail and that sometimes succeed beyond his wildest dreams. And more often than not, manage to do both at the same time.