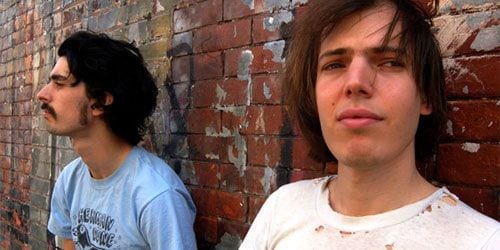 Jeffrey Lewis is damn tricky. There’s no way around it. When he released a track called “Williamsburg Will Oldham Horror”, it should have been — along with the song’s video — a bit of hipster irony. But it’s not at all. Instead, the song moves away from easy sarcasm and becomes a long and affecting rumination on the worth of art. What it means to be an artist. Why so many of us even bother trying when the returns are so slight. It is heartfelt and honest and self-doubting and, yes, funny. But, most importantly, it is so much more than what it appears.

The same is true for his new record, 12 Crass Songs. Again, on the surface, this comes off as gimmick. Jeffrey Lewis, indie folk singer, takes a bunch of songs by the punk band Crass and covers them all on one record. This has got to be done with a wink and nod, right?

Wrong. Once again, Lewis may set us up for a joke, but instead aims for something far more interesting and hard to get at: sincerity. He takes these angst-ridden, anti-everything songs and turns them into — or reveals them to be — aching personal narratives. “I am a product, I am a symbol” Lewis sings on the album’s first track “End Result” and it starts off a group of songs that show an environment that is openly antagonistic towards the individual. In these songs, humanity is often stripped away in favor of mechanism, feeling numbed in favor of rote action. And what makes the songs work so well, better than they did originally, is that Lewis removes Crass’ self-serious pretension and replaces it with honest hurt and concern. Not only that, but he comes at these songs with a variety one might not expect from someone so well known as a folk singer.

“I Ain’t Thick” is almost a hip-hop song laid over a folk base. Lewis has a group of friends there to shout the hook after he speak-spits the verses, taking aim at Sarah Jessica-Parker, among others. “Banned from the Roxy” is a bouncy pop number. The heartbreaking “Democrats” is all radio fuzz and droning organs. “Big A, Little A” starts off as a Sesame Street sing-along, before it explodes into a brash rock song, complete with screeching guitar solos and crashing cymbals at every turn. All these disparate songs come together to make an album that sounds fun, and while Lewis avoids irony, he also avoids being too serious. He is playful in a lot of these compositions and doesn’t let himself get constantly bogged down in the paranoia of the Crass lyrics.

But he does come at some of these songs as straight folk songs. “Where Next, Chris Columbus?” is the best, most beautiful song on the album, where Lewis sings about a number of great and terrible people — Marx, Mussolini, Sartre, etc. — and paints a picture of populist theories born out of personal confusion. Strings swell in the background, brushes sweep across the snare, and Lewis plucks his guitar and delivers his deadpan vocals, and the song builds its own repetitive history. The track becomes a hinge for the album, casting light back on the songs before it, and giving context to the songs after, showing the construction of a world where one person can get so lost in so many ways.

The greatest thing Lewis does on 12 Crass Songs is to make these songs sound, well, logical and terrifying. It becomes totally believable that, in a time where individuality is suppressed, that one could confuse a fight with a rock club manager with a militaristic class war. That a small-time security guard could become a cog in a much larger, much more dangerous machine — that the death of punk rock could be a signpost to a more universal loss.

The album ends with “Walls”, in which Lewis and friends sing, “Without your walls, I am alive.” They sound joyful, but the track itself is built on drum machines that sound intentionally canned, and their vocal delivery is robotic, making the song terribly claustrophobic. So while the freedom they sing of may be real, it is short-lived and still confined. At the end of the record, the constructs Lewis has been singing against are still there, still affecting him. But Lewis is still championing the notion that we deserve better than we’re getting. He takes these Crass songs and, in reworking them, reshapes them into more than snarling complaints or conspiracy theories. These aren’t just clever takes on unexpected covers. Jeffrey Lewis has given us a group of celebratory demands on 12 Crass Songs. He’s given us the strong, beautiful sound of the overlooked and overworked.