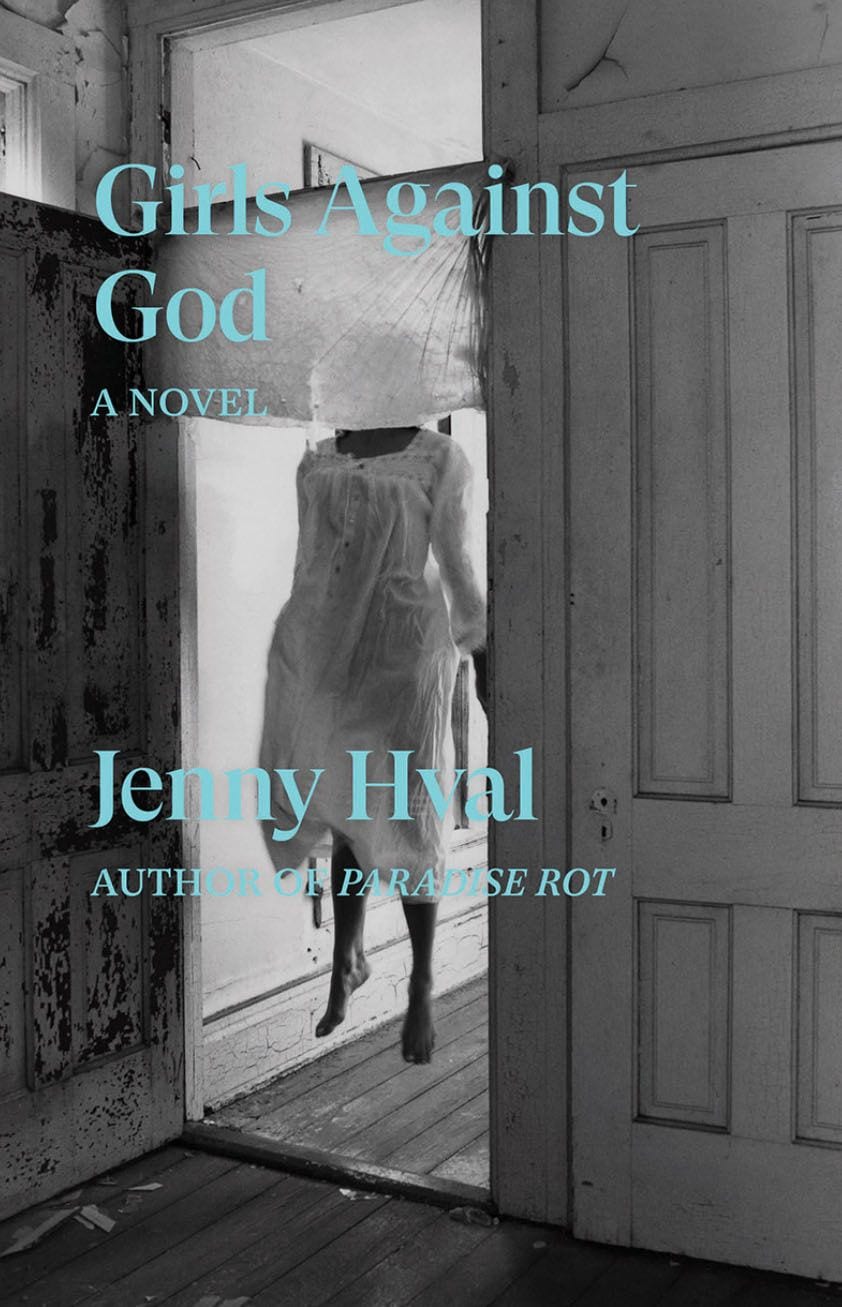 ‘I hate God.’ As far as opening lines for a novel, that of Jenny Hval‘s Girls Against God (translated by Marjam Idriss) certainly sounds explicit. As you go deeper into the novel, however, you realize that there is very little that is explicit here, least of all the ‘hate’ that the nameless protagonist-narrator feels. The story is that of a female metal musician and occultist, starting from her beginnings as a stereotypical high-school goth through to her career as part of a trio (herself and two other women), but every element of it is subtle, every scene sits somewhere between the real and the unreal.

In the hands of another artist,
Girls Against God might have ended up as a fairly run-of-the-mill book of memoirs of the sort that an accomplished and acclaimed avant-garde singer-songwriter like Hval would doubtlessly have found no trouble selling. What she produced instead is something more abstract, unpredictable, and daring. It is not a memoir, although there are clear overlaps between her protagonist and her own background, yet in some ways it can hardly be called a novel either.

Girls Against God reads rather like a collection of impromptu philosophical and/or aesthetic reflections about society, music, magic, language, film, and many other things besides, which are only loosely tied-up with the coming-of-age story of the protagonist. Of the 230 pages that make up this book, I estimate that only 10-20% actually describe things that are happening or interactions between characters. Everything else consists in extensive meditations on whatever happened to be crossing the protagonist’s mind at a certain age.

I could hardly blame you if you thought this description does not sound like compelling material: by most reasonable expectations, a novel like this should crash and burn very quickly. It almost sounds like a classic ‘teenage confessional novel’, of the sort with almost no characters and nothing driving the writing but the author’s self-indulgence. Instead, Hval pulls off a minor miracle in sticking to this anti-narrative premise and making it work.

Girls Against God is compelling, surprising, and frequently inspiring (although most certainly not a book for the squeamish – be warned, like the metal artists she listens to, the narrator is often happy to make her imagery as disgusting and twisted as possible). Some of this has to do with the unusual setting – we have heard so many stories of metal musicians who are male and from the anglosphere, that meeting a teenage girl from Norway as she tries to fit herself into those black boots is refreshing and unexpected.

But a more important aspect of the novel’s success is Hval’s undeniable writing talent. When I describe her work as ‘philosophical’, I don’t intend to connote it being dry or purely intellectual; on the contrary, it is laced throughout with powerful urban imagery and striking turns of phrase. I find real pleasure here in Hval’s natural lyricism and her emergent, spontaneous style.

And Girls Against God must be described as ‘philosophical’ inasmuch as there is very little here that feels concrete beyond the author’s thoughts. The topic of magic, for example, is occasionally discussed as a realistic possibility by the characters, who go on and perform rituals. But it seems to serve more as a thematic buoy for Hval to navigate around discussions on culture, gender roles, art, and creativity. The protagonist’s fascination with witches runs parallel to her love for metal music, and in both she sees a form of resistance to an established social order.

Hval’s arguments on total rebellion and refusal will be familiar to anyone who knows the history of punk rock, and indeed her critique is equally radical: she sees a cultural framework capable of taking even that which is genuinely creative and subversive and turning it into something that serves its ends by slotting it into predetermined, inescapable categories. When her protagonist claims to hate God, the statement is, as I mentioned, not nearly as explicit or as direct as it seems. Its theological dimension is only one part of a statement that wishes to refuse not God but, well, everything, with no compunction about telling us exactly the reasons why.

The resulting aesthetic argument is powerful, although (and this may be the only genuine criticism that I would raise against Hval) it does sometimes seem out of fashion. Not because metal and punk music are past their heyday, although that’s true enough, but more crucially because her philosophical interests seem too often anchored to paths already well-travelled.

For example, the narrator is clearly very interested in language and its role in shaping us both individually and collectively. ‘Every battle is linguistic’, she says at one point, and indeed she will often reflect that language seems to seep into and determine everything. This sort of totalising approach to language finds its roots in plenty of 20 th century modern and postmodern philosophy (here’s Wittgenstein; ‘The limits of my language are the limits of my world’), but I can’t help but wonder if this critique is still incisive today.

Would the addictive, attention-grabbing contemporary social media algorithms stop being problematic if they operated only with sanitized language? Can you fix the structural fragility of the credit systems exposed by the 2008 financial crisis – and now again by the Covid-19 pandemic – simply by changing the language in which they operate? And what of the battle against Covid-19 itself? On such strictly contemporary problems, the protagonist of Girls Against God has little to say.

I should also mention that the novel does, perhaps inevitably, lose a lot of steam in the second half. While Hval can keep us rapt for over 100 pages on the strength of her voice alone (and this is no mean feat), eventually, the absence of any real plot development means that the novel does lose freshness. Indeed, the last 50 pages feel almost burdensome to me, as the reflections become increasingly repetitious. I might be tempted to say that this might have worked better if made substantially shorter, although I am also keenly aware that this is exactly the sort of formal demand that the novel has been written to criticize!

Ultimately, the faults of Girls Against God must be forgiven because they are so intimately related to its strengths. Yes, the novel might read better if, in places, it applied some principles of orthodox, ‘institutional’ creative writing – but if the author had taken heed of such principles, she might never have written this novel in the first place. And while certainly not perfect, Girls Against God is original, powerful, and successful enough (even with its incredibly unlikely premise) to make it a much higher work of literature than any typical genre story.