Anything with “naked” in the title is likely interesting, and indeed more things should have “naked” in the title, no matter whether it makes sense. Case in point: Jerry Hopper’s Naked Alibi (1954). It’s a minor B noir from Universal. The new Kino Lorber Blu-ray reveals the film as a tart treat. Maybe it’s less essential than other naked noirs like Jules Dassin’s The Naked City (1948) and Sam Fuller’s The Naked Kiss (1964), but don’t count it out.

The first half hour is surprisingly ambiguous and discomfiting. The story opens with Al Willis (Gene Barry) stewing in a police station and giving off all kinds of belligerent violent vibes after being picked up for questioning in some matter that’s never explained or resolved. The testosterone escalates to manhandling, and Willis smashes a glass against the head of one detective before the others overpower him. He vows revenge.

When reports come in that Willis is a straight arrow who owns a bakery, has a wife and baby, and has never been in trouble with the law, Chief Conroy (Sterling Hayden) is ordered to let him go in the context of recent crusades against police brutality. When cops start getting murdered, Conroy “knows” Willis is guilty because his nose and gut tell him so — even though the evidence doesn’t. He begins a campaign of harassment even after losing his job. For this part of Naked Alibi, Conroy is the one who seems out of line for persecuting an innocent man.

It’s impossible to discuss the film further without one spoiler, for the rest of the plot depends on the revelation that Willis is a Jekyll/Hyde character. We realize this when he flees to “Border City”, a town on the Mexican border where the film belatedly introduces its other headline star, Gloria Grahame as Marianna.

The film flirts with the idea that the police not only make mistakes but that something in their professional makeup would make them refuse to believe they could ever be on the wrong track. We see this in Alfred Hitchcock’s The Wrong Man (1956). This movie solidly comes down on the side of the old pro’s hard nose and gut instinct, thereby implying that police brutality is something of a sham issue exploited for political reasons. That’s good news for those who want to be reassured that the police are looking out for them, but first we’ve been unnerved by a strong possibility of otherwise, and that taste never quite goes away.

Getting back to Naked Alibi‘s new path, Grahame promptly steals the show as a nightclub singer so in love with Willis that she’s gotten used to getting smacked around by him whenever she annoys him, as when she asks about marriage without realizing he’s already married. Kat Ellinger‘s commentary, which focuses a good deal on Grahame’s life and career, suggests that the actress was drawing on her personal repertoire of not-always-happy experiences for this role.

Marianna is introduced in a seedy bar, performing a torrid song called “Ace in the Hole” (dubbed by Jo Ann Greer) and strutting around in a black cocktail dress that looks like sexy underwear while throwing her arms about in a manner that probably owes something to Rita Hayworth. Maybe this is the closest we get to a naked alibi.

When Marianna meets Conroy and nurses him from a dangerous encounter, she’s to his strength and taciturnity, which are contrasted with the same qualities in Willis. She perhaps will always be attracted to this, but the film suggests that it’s possible to find these qualities in a more stand-up guy than Willis. Conroy is like Willis but without the insane jealousy and violent impulses.

Grahame conveys that Marianna’s damaged, dragged-around-the-block persona still harbors a strength that preserves a sense of decency and an ability to recognize Willis’s bad qualities. She can go against him. She’s not a femme fatale but a woman who works with the world and hopes for something better. Unfortunately, the world isn’t necessarily prepared to work with her, and that’s where noir’s bleak worldview comes in.

That Willis’s masculine competitions have a sexual undercurrent is made clear in the scene where he encourages Conroy and Marianna to kiss because he wants to watch. After all, he says, they’re all friends, and he wants to see if Conroy does it differently. He’s needling them, of course, yet his hostility has a perverse element that shows up in his eagerness and excitement as well as his personality switches. 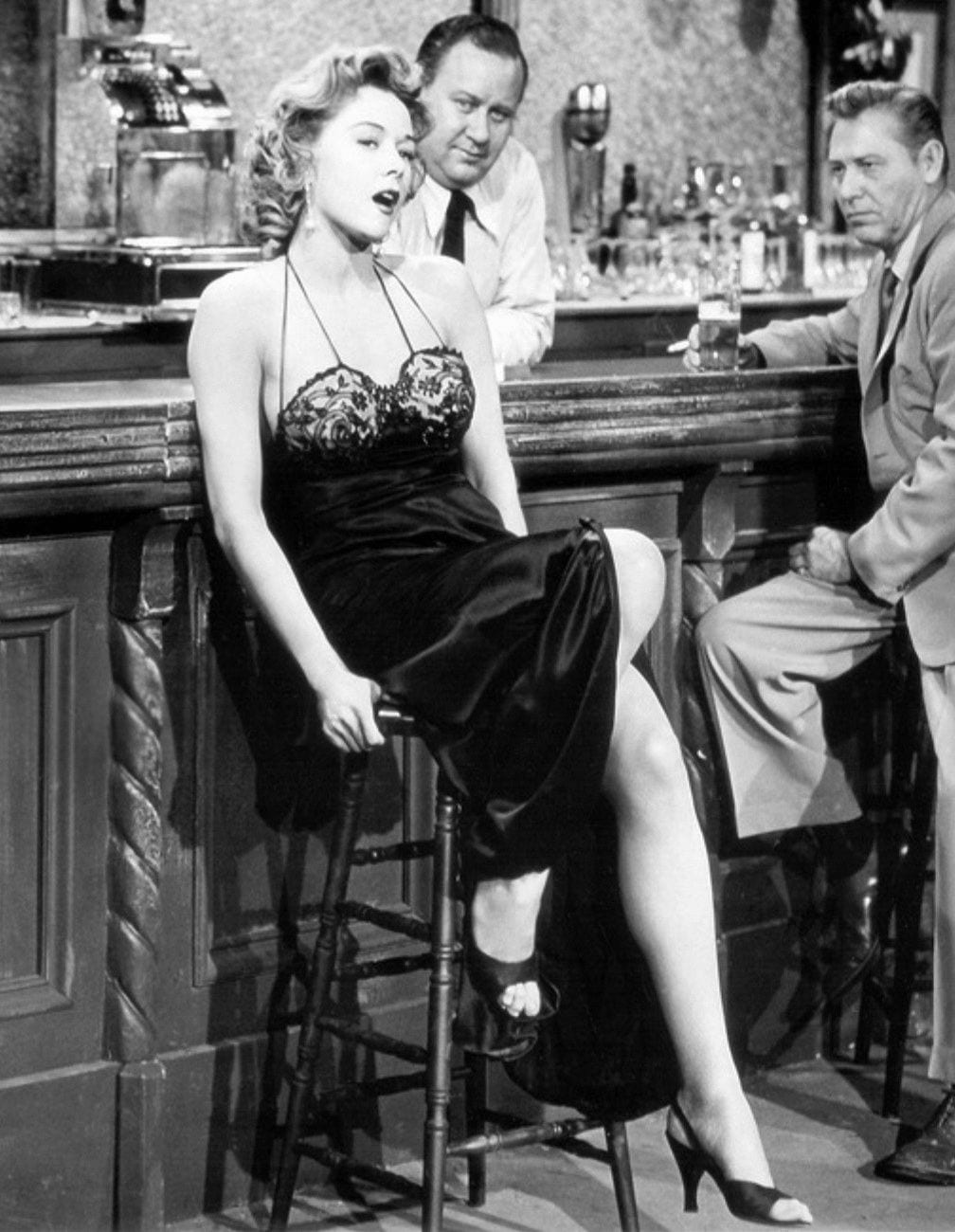 All this makes him especially off-putting and unpredictable to what we might as well call his enemies — as if he has any friends. The last act comes across as a strange three-way tango that finds them cozying up in a truck. This portrayal offers a curious counterpoint to Barry’s dandy-ish playboy persona as a TV hero.

Cinematographer Russell Metty is the secret star of the film. A longtime Universal artist who mastered both black and white and glittering color, he provides much visual pleasure in the studio’s output, and here he unleashes high-contrast shadows like nobody’s business. The plentiful night shots are lovely, and the phone booth sequences seem designed to make more photographically minded viewers marvel at the chiaroscuro patterns on faces. If we’re not careful, we might forget to pay attention to what the characters are saying.

The Mexican border setting will remind viewers of many noirs where the US/Mexico border is a psychological space for unleashing the libido and a near-lawless mentality where “border” mirrors the Western “frontier”. The folks in noirs and westerns are forever crossing borders or just living in that liminal state where anything goes. Examples include Orson Welles’ Touch of Evil (1958, also shot by Metty for Universal), Robert Montgomery’s Ride the Pink Horse (1947, also shot by Metty for Universal) set atypically in New Mexico, Anthony Mann’s Border Incident (1949) starring Ricardo Montalban, and Ida Lupino’s The Hitch-Hiker (1953).

Young crewcut Chuck Connors has a prominent supporting role as a cop, Marcia Henderson plays Willis’ clueless housewife, and child actor Billy Chapin is recognizable in a plucky trial run for his more demanding role in Charles Laughton’s The Night of the Hunter (1955), one of the strangest and most terrifying of noirs.

Although this film is produced by Ross Hunter, it doesn’t appear at 20 paces like “a Ross Hunter production”, since we associate that phrase with lavish color melodramas directed by Douglas Sirk and others. That’s one reason it’s important to have access to more of Hunter’s projects, the better to recognize his versatility and authority outside of what we think of as his”special zone”. 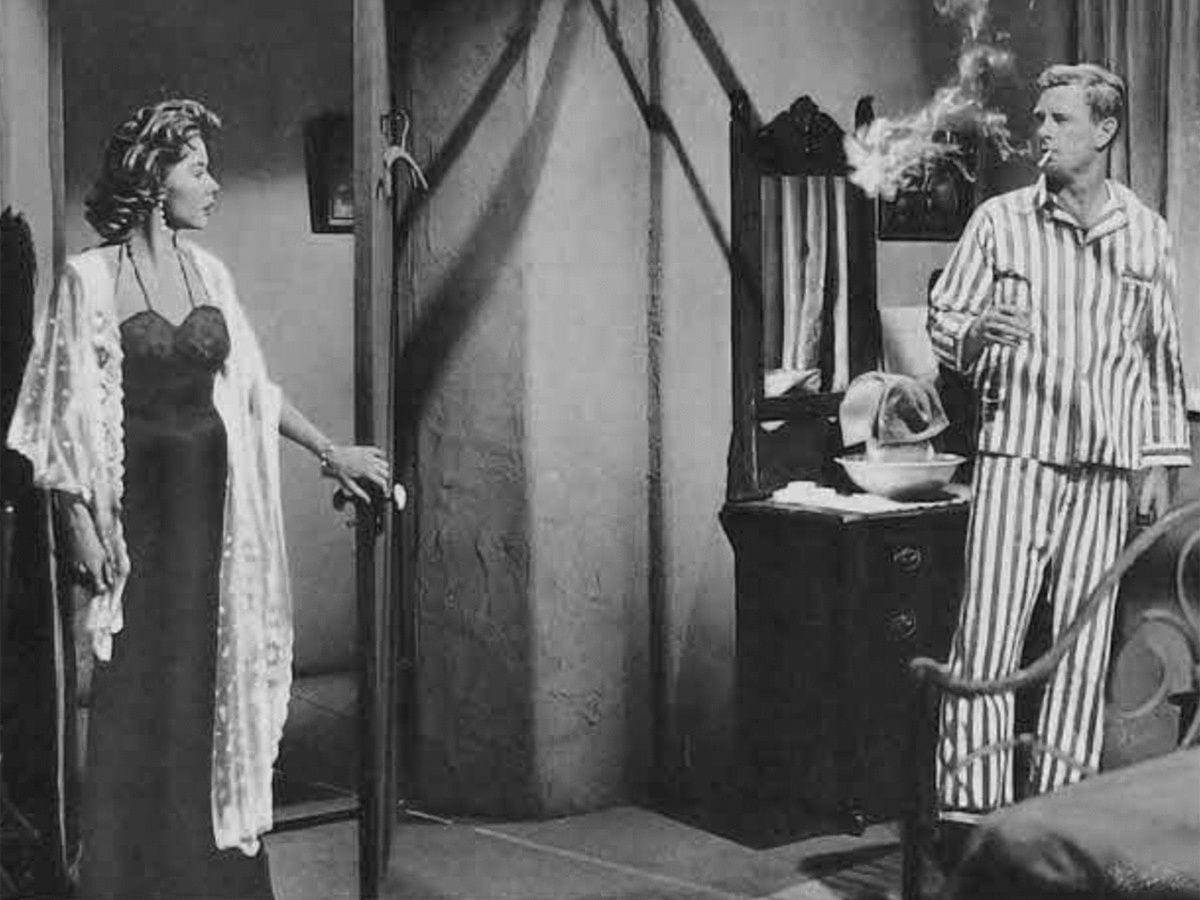 We can better see that the finalé’s gestures to grandiloquence and heightened emotion aren’t far removed from, say, Hunter’s production this same year of Sirk’s Magnificent Obesssion. Come to think of it, the noir film’s climax inside and on top of a church brings an element of spiritual redemption to the proceedings (Marianna as Mary Magdalene?) that’s not a hundred miles from the Sirk movie, either.

Although it’s fair to state that Hopper is no Sirk, it’s also true that their careers tangoed around each other. Hopper’s association with Hunter would follow with two of Hunter’s Technicolor melodramas with Rock Hudson, One Desire (1955) and Never Say Goodbye (1956), the latter of which was prepared by Sirk, who worked on it briefly. On a boxing picture called The Square Jungle (1955), Hopper worked with two other major Sirk collaborators, producer Albert Zugsmith and writer George Zuckerman.

A comparison of all this output tends to reveal why Sirk is the “auteur” and Hopper the “journeyman” or “hack”, but such directors were crucial to Hollywood and needn’t be dismissed. As Ellinger discusses, Hopper was among the many bread-and-butter directors who migrated into successful TV careers as the studio system declined, and there he’d work again with Barry on his famous series, Bat Masterson and Burke’s Law.

Since his TV resume encompasses everything from multiple episodes of Wagon Train, Perry Mason and The Fugitive to The Addams Family and Gilligan’s Island, Hopper’s mastery of forms and styles must be admitted. In The American Vein: Directors and Directions in Television (Dutton, 1979), Christopher Wicking and Tise Vahimagi opine that “there was more energy than style in Hopper’s features — he had something to say but couldn’t show it. A rough-around-the-edges look, however, when transposed to the often conventionally framed and lit TV image can become an asset….He beefed up formulas and brought a distinctive touch to even minor affairs.”

Well, Naked Alibi has both energy and style, and if much of the latter is thanks to Metty and the actors amid Hunter’s production, Hopper was there too and had something to do with it. It’s important and useful for such “minor affairs” to be brought to Blu-ray as spiffed up as possible, not merely for enjoyment but for appreciation of film history. We see and learn about the evolution of genres and styles even among those filmmakers who don’t grab the headlines.