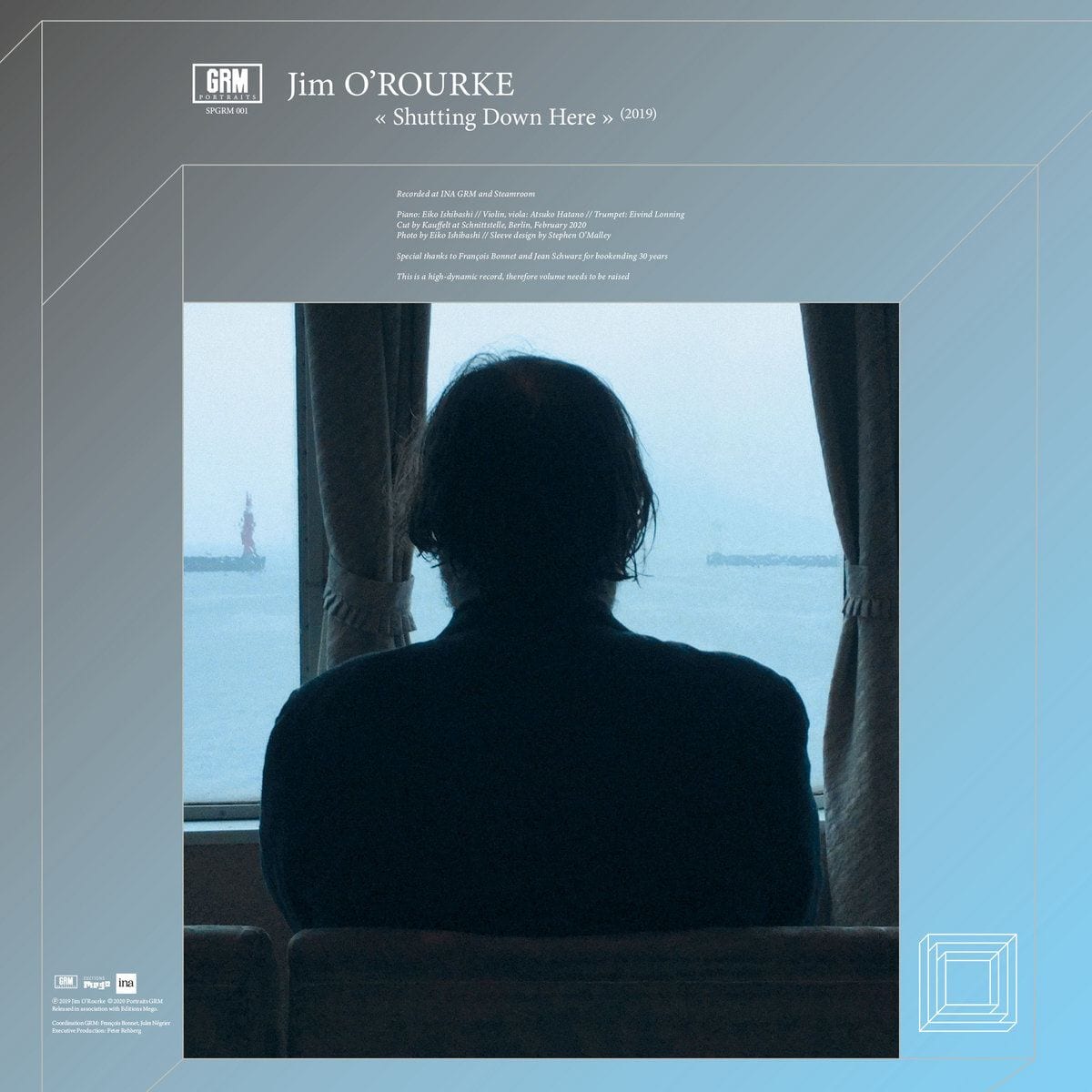 Jim O’Rourke fired off “Cede” 20- or 25-odd years ago as a salvo in the battles within his alien landscape of a musical mind. Shutting Down Here, then, is a punctuation. The new composition, out 14 August, was put to tape in sessions spanning decades at the Groupe de Recherches Musicales, or GRM, in Paris – and that’s an important, no, an essential detail. The institution is legendary, some might say without rival, in the pathos of 20th-century experimental music and listeners can feel O’Rourke working through the weight of that legacy, as well as his place within it, during the span of the composition’s 34 minutes.

The piece dances around well-worn concepts of musique concrete and O’Rourke unfurls wondrous spectacles where the distinction among electrically created tone-colors, field recordings, and textured “silences” is razor-thin. Followers of O’Rourke’s more popular-music-informed Drag City output will feel if they enter bravely here like they’ve been shot into something as massive and death-rattling as the Kuiper belt. O’Rourke continues to make good on those unspoken promises never to make the same record twice. And though Shutting Down Here owes debts of lineage to 1995’s Terminal Pharmacy and, yes, Gastr del Sol’s “Our Exquisite Replica of ‘Eternity”, its scale is much grander. It’s universe-, maybe existence-wide, with little regard for the gravity of our little planet and the lives trapped within it. Listening to this on headphones – and LOUD – is a real, high-dynamic treat.

While there’s something to be said for making art for art’s sake – and the engineering and mixing technique here can be simply riveting – the piece sometimes lacks causality. There is an intentionality to it, maybe even some subsets of narrative threads, but many moments have little semblance of a relationship to what surrounds them. The sounds and colors with which O’Rourke sound-paints are impressive, but his very conscious rejection of Romantic constructs can be difficult to digest for those with less than extensive schooling in the avant-garde.

Atsuko Hatano sometimes wanders to the surface on the violin and viola but is just as frequently ziplined to the back of the proceedings. It isn’t until the closing when the machine has been killed that Eiko Ishibashi’s piano enters prominently. There, their refrains are resolute and mournful, a wonderful detail. Trumpeter Eiving Lonning also does little to flesh out the narratives. The moments when the trio do coalesce – say, swooning over static around the 24:20 mark – are devastating, in part because they are surrounded by so many consciously post-modern devices and soundscape deltas.

Talking with the magazine Tone Glow in an exhaustive and illuminating interview, O’Rourke recently classified Shutting Down Here as the “most meaningful” release to him in his weighty discography. That’s a big statement. Listening to the one-track LP, it bears suggesting that his intention for saying that might be extra-musical. Shutting Down Here is a fine piece of experimental music with a sure hand leading the way.

But it’s not pushing this music forward with the same propensity as Luc Ferrari (who recorded at GRM) or Derek Bailey were a generation or two ago. O’Rourke likely translates its scope as a response to, a kind of conversation with, the forebears who trudged through the GRM facilities before him; it’s wrapped in a lot of context, for better or worse. In the end, the sounds don’t build into a grander message beyond much more than technique. Yes, it’s interesting – but it will leave most of those outside small academic circles feeling a little cold.