From 15 to 19 August 2019, my city of Dublin was host to WorldCon, the biggest annual science fiction convention in the world. Over those five days, thousands of fans, readers, writers, filmmakers, artists, and curious onlookers came together to celebrate all things sci-fi, fantasy, horror, fairytale, folklore, or just plain weird.

One highly anticipated segment of the convention each year is the awards ceremony, where the best sci-fi from the past year is showcased, recognized, and celebrated. This year’s awards ceremony, however, was a scene of controversy when British writer Jeannette Ng—winner of the John W. Campbell Award, which recognizes the best new sci-fi writer of the last two years—used her acceptance speech as a platform to launch a withering attack on the award’s namesake.

“John W. Campbell”, Ng stated, “was a fascist. Through his editorial control of Astounding Science Fiction, he is responsible for setting a tone of science fiction that still haunts the genre to this day. Sterile. Male. White.”

The response to this declaration, needless to say, was divisive, with some even calling for Ng to be stripped of the award. Yet Ng’s timely appraisal of the repression and discrimination that have marred much of sci-fi’s history is merely the latest incident in a decades-long effort to wrest sci-fi from the grip of an established old guard of editors, writers, and fans committed to preserving the genre as the bastion of, primarily, white men.

It also offers a context within which to better appreciate the significance of one of sci-fi’s most radical and influential feminist writers: Joanna Russ, the subject of a new volume by sci-fi writer and critic Gwyneth Jones.

Part of the University of Illinois Press’s Modern Masters of Science Fiction series, Jones’s volume (simply titled Joanna Russ) offers an insightful and learned account of Russ’s life and times. Jones traces Russ’s evolution from a repressed young woman coming to maturity in the suffocating atmosphere of the United States in the 1950s, through her first forays into both genre writing and feminism, to her emergence as one of sci-fi’s sharpest and most politically engaged critics and writers.

The work consists of what might be called an extended summary of Russ’s career as a writer, critic ,and activist. Russ was, as Jones suggests, the most significant feminist sci-fi writer of her period. While other significant contemporary authors would maintain an uneasy relationship with feminist politics—including such feminist sci-fi luminaries as Ursula Le Guin, James Tiptree Jr. (a pen name used by Alice Sheldon), Marion Bradley Zimmer, Judith Merrill, and Samuel L. Delany—Russ was openly and staunchly committed to the politics of gender and sexuality from early in her career.

As Jones makes clear, Russ’s feminist politics were inseparable from her activities as a sci-fi writer and critic. Each of the chapters in the work focuses on a different period in Russ’s career. The early chapters examine her forays into genre writing, with a long discussion of the “Alyx” stories (a loose series of works centered on a knife-wielding pirate, beginning in the sword-and-sorcery genre of classic fantasy before evolving into something more akin to sci-fi) and an enjoyable segue through a selection of Russ’s rather unforgiving early reviews. 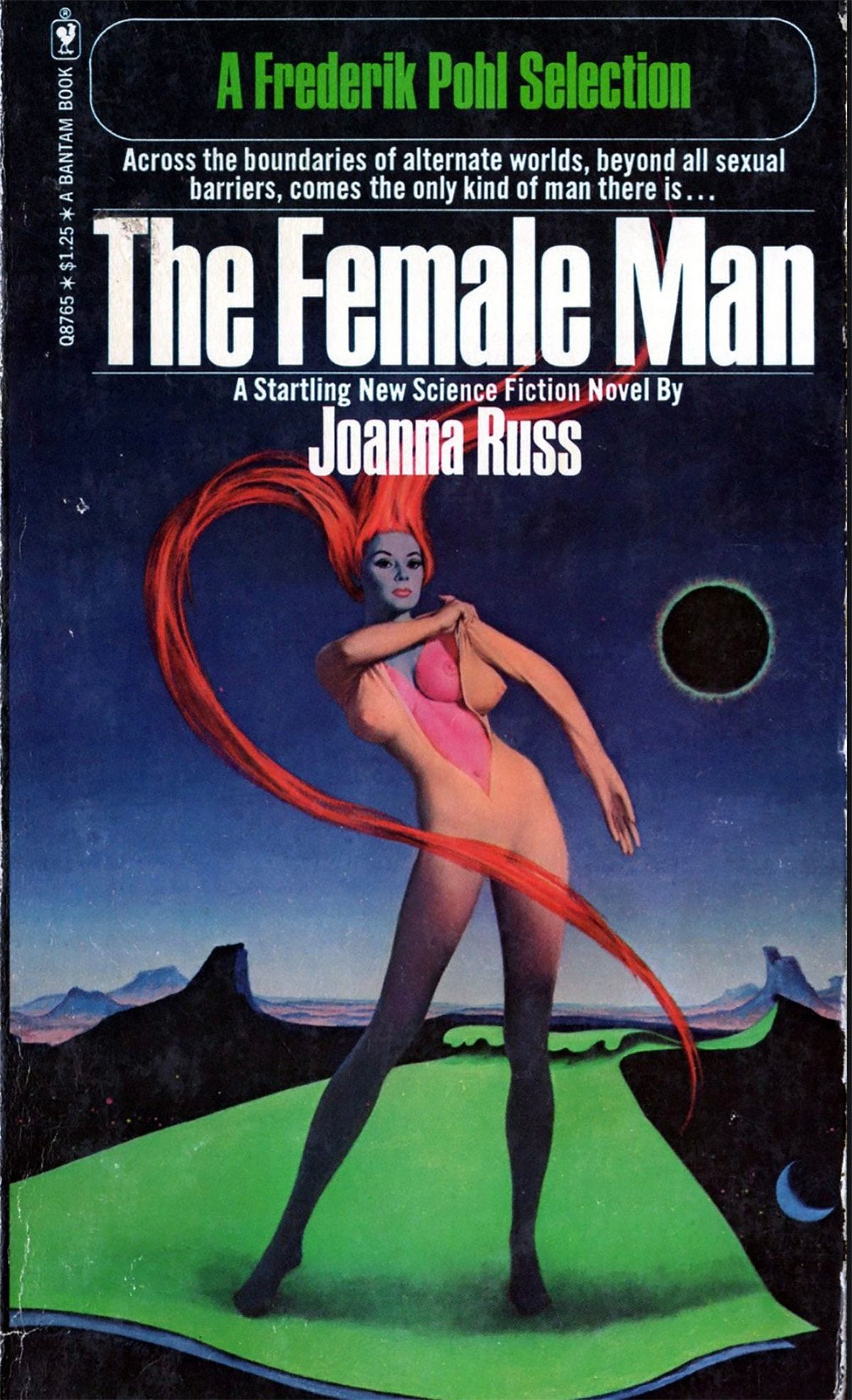 Later chapters take up Russ’s more critically significant novels, including what is probably her best-known work, The Female Man (Bantam, 1975). Much has been said about The Female Man, a dazzling novel featuring four characters who may or may not be four different versions of the same character, who in turn may or may not be a version of Joanna Russ herself. In the novel, as Jones writes, there is a “thrilling modernist … experiment in the art of compelling fiction to tell the truth—the whole truth, in all its immediacy and complexity—about a human experience”, in this case the experience of “a battle-weary female academic and writer, goaded by incessant sexism” (68).

Jones’s book is written in a breezy, conversational style that suggests a clear familiarity with the subject of her work. Nevertheless, it is hard to say who the book will appeal to. It seems a work most clearly written for scholars seeking an overview of Russ’s life and career, as a way of gaining a familiarity with Russ’s body of work as a whole before diving into further research.

Yet to characterize the book in this way would be to ghettoize it in precisely the way that Russ herself refused, as an sci-fi author, to be ghettoized. Russ did not trip lightly through the male-dominated territory of sci-fi, fitting herself into whatever pre-determined cul de sac had been allotted to female sci-fi writers. Instead, she bashed and thumped and elbowed her way through the center lanes of the genre, often earning herself the contempt of some of the best-known (at that time) writers in the genre as a result of her frank avowal of sci-fi’s gender problem and her explicitly political and feminist literary works.

It is therefore not an overstatement to suggest that a proper understanding of sci-fi literature —and certainly the period in the 1960s and ’70s, when efforts towards a more diverse field began to gain significant political momentum—requires a close familiarity with Russ’s work. Her influence in the field of sci-fi during this period and later cannot be overestimated. Whether editors and authors agreed or disparaged her views and works (and there were significant numbers of the latter), by the mid-’70s it became impossible to ignore her influence on the political and gendered landscapes of the genre.

The real triumph of Jones’s work is the picture of Russ that emerges. The text is not quite biographical in the usual sense of the term: the only properly biographical section is a brief opening segment outlining Russ’s childhood and teenage years. Yet much can be gleaned about Russ the writer by the inner portrait that slowly develops over the course of the book—from snatches of reviews, quotes from interviews, and passages from a wide variety of novels, stories, and essays.

What emerges is a portrait of a writer whose wit and intelligence is matched only by her fierce commitment to feminist politics. Jones’s juxtaposition of a wide variety of sources helps to draw out the recurring themes and continuities in Russ’s work, and even the large number of story summaries become fascinating reading, as Jones relates story details to her own life and offers a convincing case for Russ as essentially an autobiographical author.

Jones’s text, then, is essential reading for those interested in the history and evolution of sci-fi as a genre, and in the continued fight for diversity, inclusion, and visibility of sci-fi and pop culture more broadly. Ng’s speech in Dublin earlier this month, and the controversy it inspired, are clear indications that that fight is not yet over. Jones’s text serves as an essential and timely account of one of its key foundational figures.