When did the future get so small? At the time Joe Meek and the Blue Men were cobbling together I Hear a New World, it wasn’t crazy to believe that humankind would soon live on the moon; that political chauvinism would give way to a one-world government; that first encounters with extra-terrestrial life were imminent. Last year I met a VP who, in 1959, completed a Ph.D. arguing that humans were advancing so rapidly that we were outgrowing our negative instincts and entering a time of peace, creativity, and contentment. He told me with a sigh, “You can imagine how stupid I’ve felt for the last five decades.”

The album, I Hear a New World, is a broadcast from that moment of hopefulness for the world and for its creator, who declared in a contemporaneous letter, “I’m sure your son is going to be famous one day, mum.” A true maverick, Meek bucked the system by working mostly in makeshift home studios, pioneered new techniques and technologies, and making his production as much a part of the music as any instrument.

A quintessential “lost masterpiece”, only five of the album’s 12 tracks emerged before a 1991 “restoration”, which is included here alongside the full unreleased album. Ninety-nine copies of a 7″ EP were issued in 1960 featuring “Magnetic Field”, “Around the Moon”, “Entry of the Globbots”, and “Valley of the Saroos”. Meek then re-recorded and renamed three of those songs — plus then-unreleased tune “The Bublight” — to fill out a 1961 album of instrumental country music by his house band, the Outlaws.

This box set’s ambitions are contained in its subtitle “The Pioneers of Electronic Music”. In addition to Meek’s work, the listener is treated to three hours’ of compositions ranging from the BBC Radiophonic Workshop to composers such as Iannis Xenakis, Olivier Messiaen, and Edgard Varèse. In theory, contextualizing Meek’s work against the whirl of new sound emerging in the late 1950s and early 1960s is fair. In practice, it feels a little like a “cut and shut” welding together very different elements based on a talking point that could be acknowledged without such an avalanche of evidence. That isn’t to say these pieces aren’t interesting, but few truly resemble what Meek was doing, which was still, most definitely, pop music. 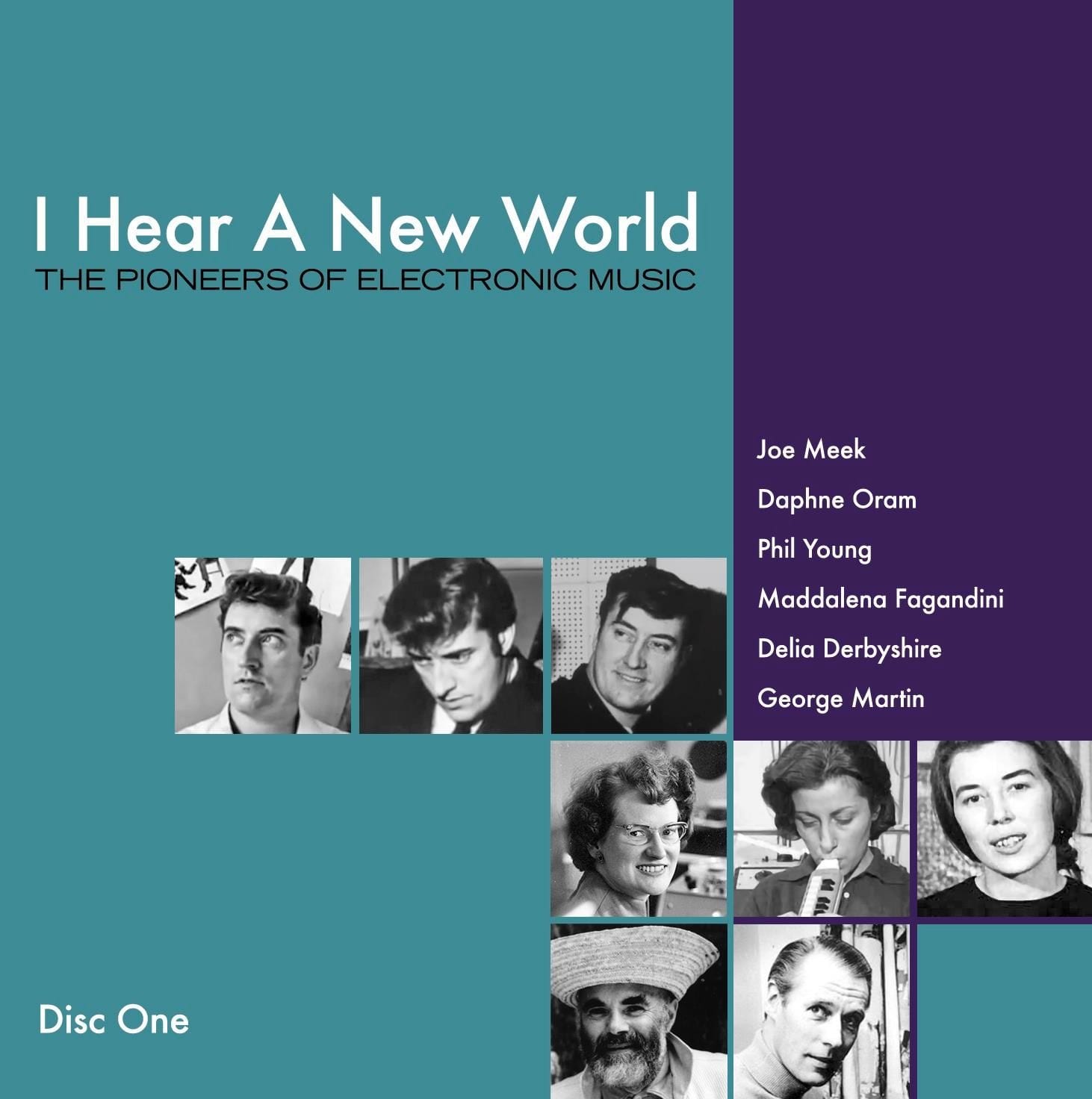 While Meek’s famed home studio — above a leather goods shop at 304 Holloway Road — is a world away from the environments in which most of the music here was made, I Hear A New World was even further removed, having been made at home in his previous flat at 20 Arundel Gardens. That’s another galaxy compared to the realm of tenured academics, professional composers, and white-coat technicians. In seeking to pay respect to Meek’s innovations by placing him in such company, an inherent snobbery is accidentally reinforced. Pre-Beatles pop is a dead-zone to modern ears. But Meek’s work has far closer ties to the DIY efforts of thousands of working-class people in 1950s skiffle bands than it does to Pierre Schaeffer. Why should the “unlistenability” of the latter be celebrated while the former is erased? Why is it to the burnishing of Meek’s reputation to make him kin to the BBC Radiophonic Workshop, as if his work would be diminished by rubbing shoulders with Lonnie Donegan?

The secret history of I Hear a New World does not lie with Luc Ferrari even if there are sonic resemblances between the whirring introduction on the album’s title track and the dematerialization sound used for the TARDIS in Doctor Who, or Meek’s use of distortion on “The Bublight” versus Daphne Oram’s work on “The Innocents: Savage Noises (Excerpt)”. The closest ties visible in “I Hear a New World” are to the introduction Meek gave the Tornados’ 1962 hit “Telstar”; the vocal treatment snatched from “The Chipmunk Song (Christmas Don’t Be Late)”; and the way in which the instrumental core of the song sounds like the work of Martin Denny, whose album Exotica topped the Billboard charts in 1959. Meek’s gift was his ability to devour such a wide variety of sources, then regurgitate them as unique entities.

Consideration of Meek’s work is often marked by the same censoriousness that marred his life. Instead of glossing praise over the top of his flaws, it seems more realistic to say his unique talents were intimately entwined with those flaws. Meek had to hide his homosexuality and feared blackmail as a result. He was beset by paranoid delusions, including that mind control was being used against him. Meek even investigated communication with the dead so fervently that, at one point, he believed a cat was asking for help in a human voice. It’s hard not to see this as part and parcel of his ability to hear possibilities that others could not. 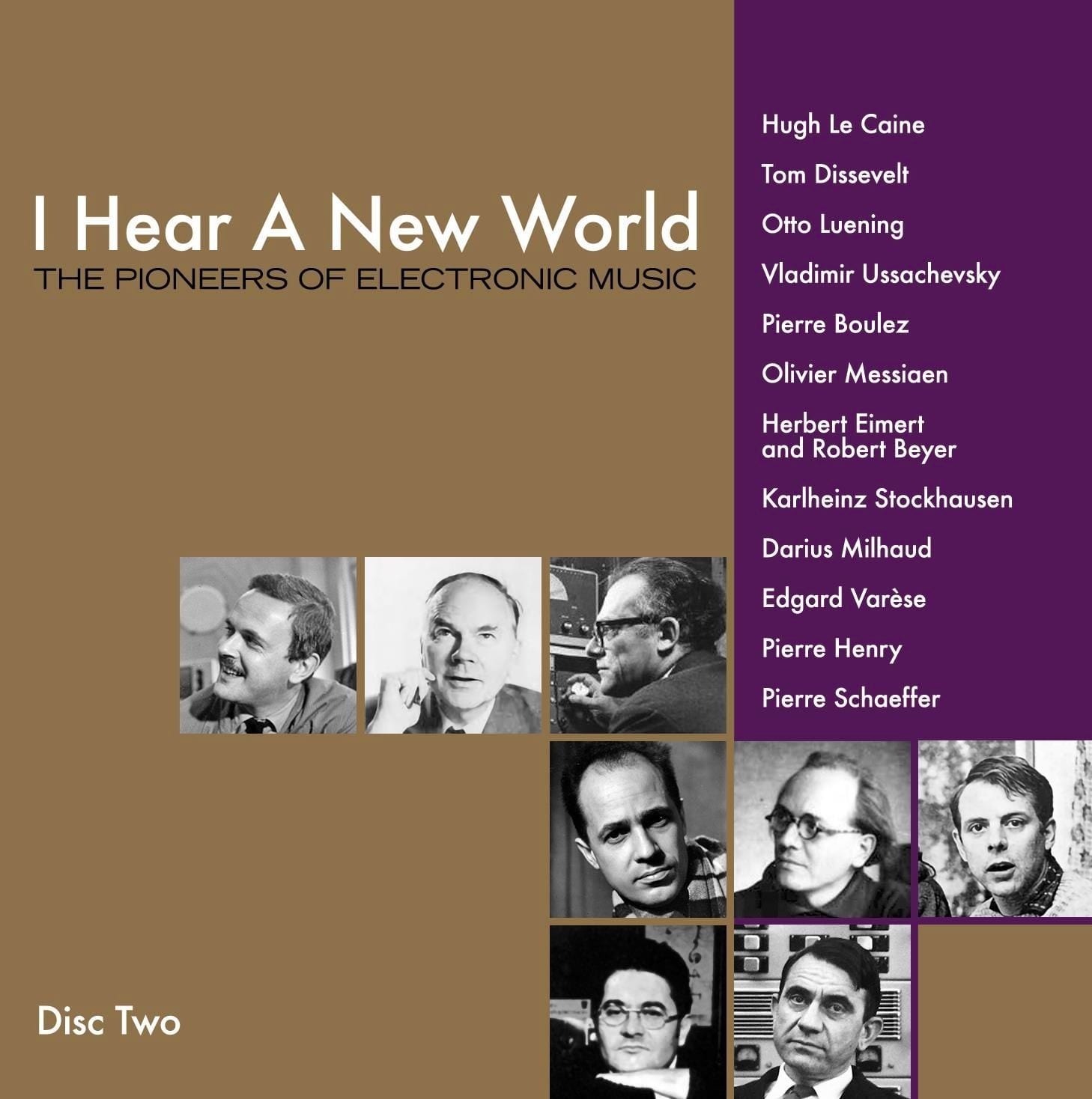 For example, “Disc Dance of the Globbots” is the bastard son of a banjo hoe-down and a West End cockney knees-up, twisted into the ritual celebrations of “happy, jolly little beings…(with)…their cheeky blue-colored faces”, as described in Meek’s EP liner notes. As another example, “Orbit Around the Moon” pulls from a musical vocabulary shared with Johnny Cash’s “I Walk the Line” but adorns the tune with notes that smush or slide around in unnatural ways. Meek was refracting multiple forms of music through his space-age concept and landing far enough away that the results still sound like they inhabit their own dimension in time and space.

Nothing on I Hear a New World deviates from the “three-minute pop song” model, which is a huge benefit in terms of digestibility compared to discs two and three where it can be hard to hear where anything starts or ends. Amid Meek’s fun-house mirror re-imagining of 1950s genres, a couple of songs point even further out. On “Glob Waterfall”, he reprocesses what might be bubbles blown in water through a straw into sub-oceanic flurries, marries them to an echo-drenched piano figure, then inserts resounding metallic crashes that interrupt the gentle flow of the piece. The first minute-and-a-half of “Magnetic Field” inhabits a similarly abstract improvisational space where Meek’s fascination with the potential of technology is given full rein.

Disappointingly, the 1991 restoration and the original album differ in only the mildest ways: the distant whirring of the introduction on the 1991 iteration of “I Hear a New World” is a speaker-shaking rumble on the 1960 version, there’s a difference in speed too. Perhaps a more satisfying alternative would have been to seek out more of Meek’s work to place his “Outer Space Music Fantasy” in the context of other experiments he was conducting. Including the countrified versions from the Outlaws LP would have been a start. “Telstar” deserves to be here. John Leyton’s “Johnny Remember Me” (about a young man haunted by a dead lover) perhaps. Meanwhile, if access to Meek’s archive were a possibility, then hopefully, the 4,000 hours of work therein would yield further space-age oddities.

At age 37, barely eight years after forging this testament to what might lie beyond our atmosphere, mirroring the declining optimism of humanity’s vision, Meek died by his own hand. Racked by debt, drugs, and depression, the rather prosaic trigger was an argument with his landlady, Violet Shenton. Meek was frequently in arrears, and his assistant overheard a tense conversation referencing “the book” — the rent book — and then, “Calm down Joe…” followed by a gunshot, Shenton’s body tumbling down the stairs, and Meek blowing his head off. With his ears so attuned to other realities, it seems there was no reason left to stay in this one. It’s incredible to hear that his pioneering work still sounds so original, a time capsule pointing to dead music of its era while evoking a future we can no longer imagine. 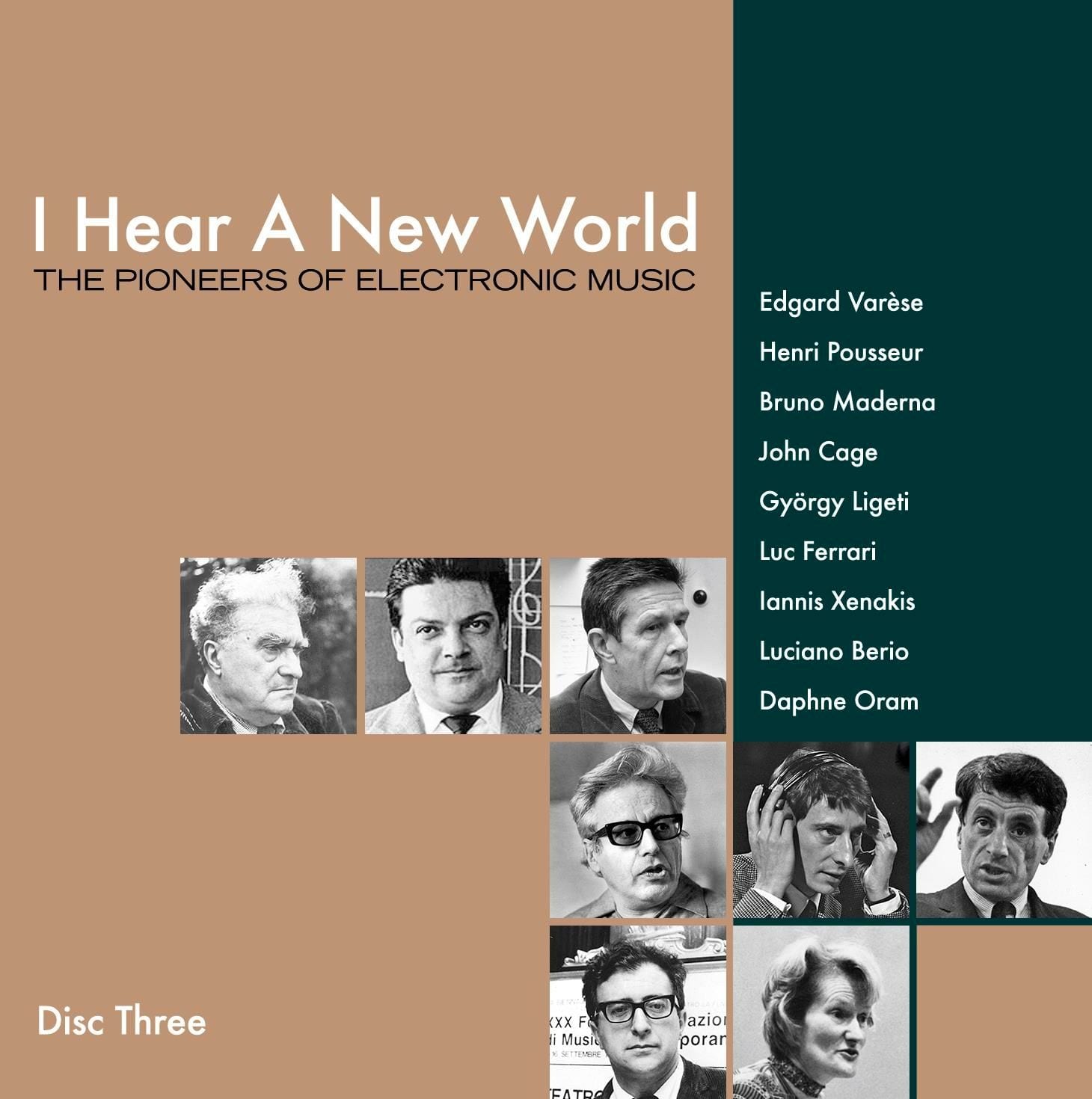