John McEnroe: In the Realm of Perfection
Oscilloscope

Tennis pro John McEnroe doesn’t snarl, he pouts. He doesn’t grovel or beg, he yells, throws tantrums, draws the ire of the crowd and just about anyone else sitting at home watching his game on television. He angrily stomps up to the official chair, ready to engage in a debate he must know he’ll never win.

With the whole world waiting for his implosion, he stalks back to the line after yelling at the referee, his gait a study in barely controlled incredulity, bounces the ball a few times, still shaking his head for anyone who still cares. And then, just at the point when other players would come undone, McEnroe unleashes a furious serve out wide and prances up to the net for an easy volley into the open court. He betrays no happiness.

Such is a typical scene from Julien Faraut’s 2018 documentary,
John McEnroe: In the Realm of Perfection (L’empire de la perfection). The film emerges from a treasure trove of archival footage, all stemming from a project by the French Tennis Federation to film tennis’ biggest stars in tight close-ups. None, however, held the camera’s attention quite like McEnroe, both with his lithe physical brilliance and raw emotive force. The film focuses on no one else – it’s just McEnroe playing in the French Open throughout the 1980s, punctuated by his legendary 1984 season and collapse in that year’s final at Roland Garros.

In the Realm of Perfection is at its most interesting when it’s at its most self-reflective. The movie is about two things: tennis and cinema. On a superficial level, this pairing is odd, if only because a racquet sport and the art of moving images seem to be concerned with different things if we abide by some haphazard contrast of art and sport. The explicit connection between the two, however, comes courtesy of legendary film critic Serge Daney, who wrote several articles on tennis for the French newspaper, Libération.

The common denominator between film and tennis, says Daney in a voiceover, is the potential to create time. For tennis players, whose actions are separated from a ticking clock, it’s about “creating the time needed to win”, to dictate themselves when the match is over; for cinema, it’s about creating segments of time against the backdrop of the film’s conclusion, the possibility to carve out extra time in the race against fate.
Tennis and cinema, united in their dramatization of time’s passage, are about expanding the possibilities of what can happen in a single moment.

McEnroe is a master at controlling a match’s tempo, at interrupting his opponent’s sense of flow. He’s unpredictable, disguising his intentions with an extra hitch in his serve, with an expert feel for incurring the drop shot from seemingly nowhere. As Daney said, “Bjorn Borg [McEnroe’s rival] puts the ball in the sport where the player is not. McEnroe puts it in a place the other player will never reach.” 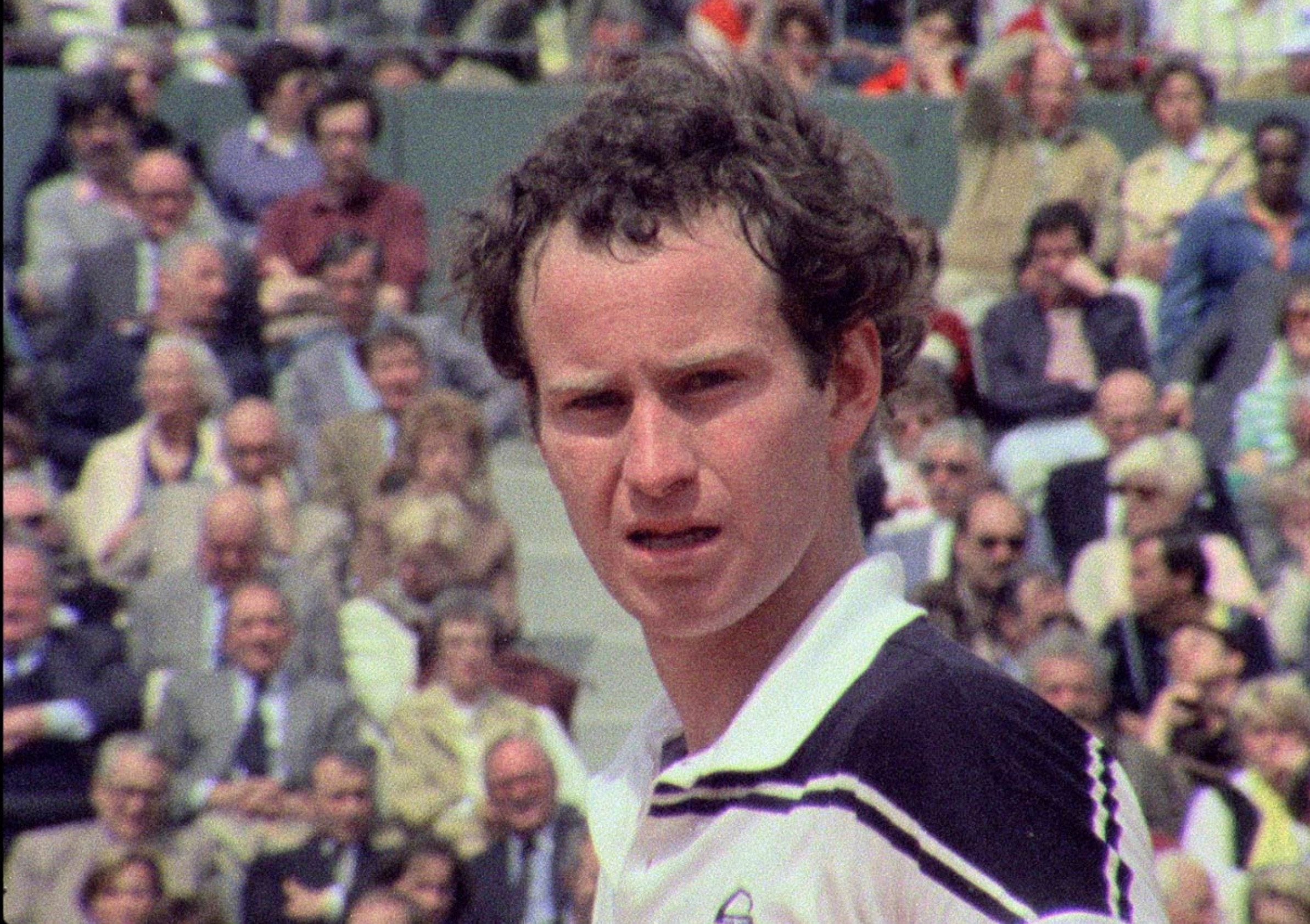 It’s this off-kilter way of playing, and the polarity between McEnroe’s clandestine playing-style and his psychologically unbound temper, that so fascinated the late French Tennis Federation’s Technical Director, Gil de Kermadec, the person in charge of the cameras. De Kermadec’s initial intention was to use his footage of professionals to teach the next generation of French tennis players. He was an ardent believer in the camera as a didactic tool – it could excavate all of the movements that passed unseen before the un-aided eye and thereby break the player’s movements down into digestible, teachable bits. With slow-motion, stills, and rewinds, de Kermadec wanted to create the visual vocabulary of a professional tennis player, to use the camera to teach aspiring players the motions of success.

There’s a haunting bit of symbolism here, one that reinforces what previously looked to be a frayed, or aspirational, relationship between tennis and cinema. Roland-Garros, the site of the French Open, was built upon the same ground wherein some of the earliest experiments in capturing motion on film were tested. Étienne-Jules Marey, the famed French physiologist and inventor of the predecessor of the cinematic camera, the “Chronophotograph”, conducted his work at the “Station Physiologique”, which was later bulldozed to make way for the tennis stadium. Beyond an eerie geographic coincidence, there’s an intellectual lineage that In the Realm of Perfection both traces and participates in.

Marey was obsessed with time and motion. Understanding the body primarily in terms of its economy, the efficiency with which it worked and exercised, Marey designed his “Chronophotograph” with funds from the French government, justifying his research by highlighting its potential for “the development and utilization of muscular energy; in education and military gymnastics, manual trades, sports and so on” (Rabinbach, The Human Motor, 104). Using his invented cameras, he studied how humans and animals moved by showing their successive postures in the same frame: a diagram of how a real human or animal strides and jumps.

Ostensibly a project designed to correct inefficient movements, Marey’s study was perhaps most significant for exposing us to an entirely new perceptive world. Rather than the first images of space, or the first underwater explorations, Marey’s “Chronophotographs” didn’t take us anywhere we hadn’t been before. Instead, he showed a world of micro-fractions of seconds and minuscule twitches and quirks and movements that inhered in our everyday world but existed in a different time register. A world our eyes are hopeless to see.

Gil de Kermadec shares much in common with Marey: French citizenship, interest in the body and its motion, workplace location and, above all else, a fervor for mechanical vision. De Kermadec’s exquisitely slowed footage of McEnroe was not just an aesthetic preference – it belied a faith in a new form of perception which would set the standard for visual accuracy. Our eyes might be flawed, but the camera surely is not.

Thus, there’s another, easier way to think about how cinema “creates” time: it slows it down or stops it altogether. Similar to how an image from outer space changes the way we think about ourselves and our relation to the universe, we should not take for granted how the camera’s probing, surgical vision changed how we view the world around us. With slow-motion, the scenography of a moment is expanded immeasurably. We see just how much action flies beneath ordinary perception. A second thus extends itself to include a whole new field of action we didn’t realize, until then, existed. With space we saw how the universe expanded extensively outwards, with slow-motion we see how it expanded intensively inward. 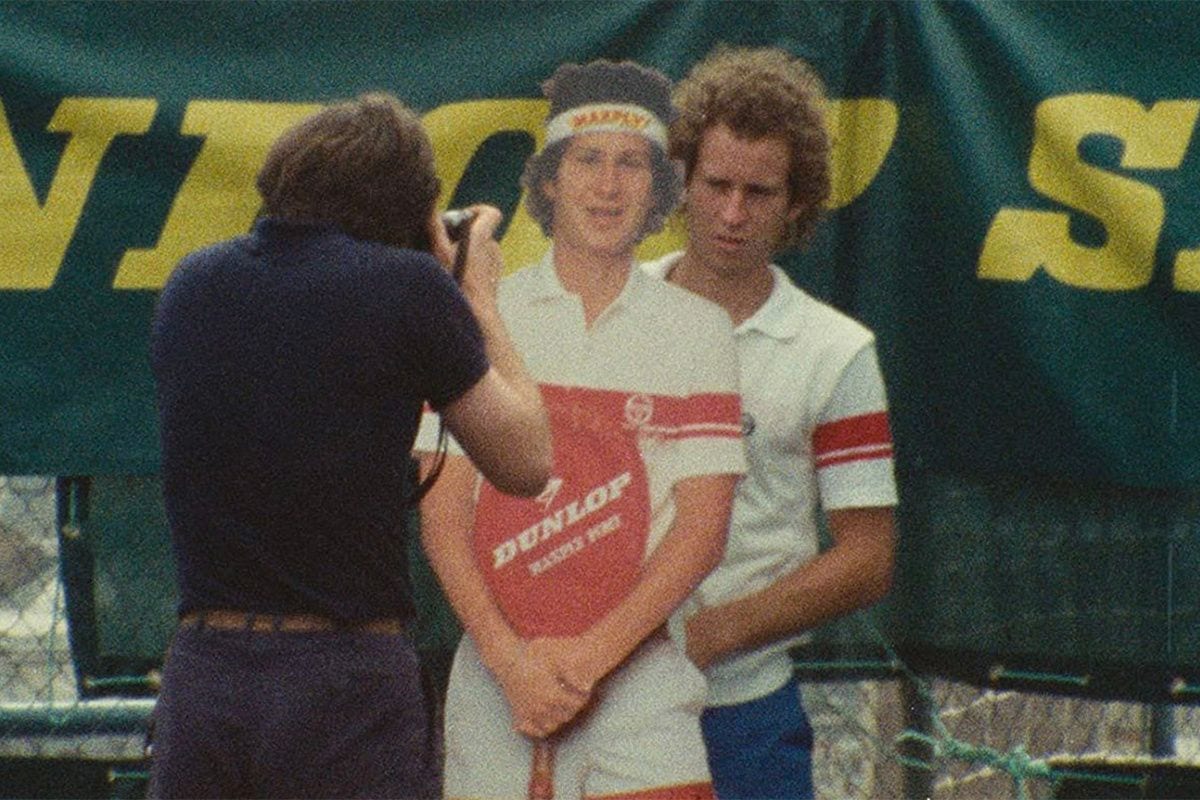 The way that tennis is filmed in In the Realm of Perfection the camera seems designed to unveil, to explore the two versions of McEnroe: the one he sees of himself, and the one he sees onscreen. Another side-effect, if you will, of how the camera works its way into our perceptual life is how it amplifies Faraut’s maxim that “The image we have of ourselves rarely ever tallies with the image others see.” This is especially true when we consider how unrecognizable we become when our movements are slowed down and zoomed in on and we ask ourselves, “do I really flail my arms like that?”

After watching a lot of tennis in the 1980s, Daney concluded that a fundamental shift had happened in the sport. Whereas in past eras tennis had been a gentlemanly sport, played with prim properness and a delicate lack of competitiveness, the arrival of McEnroe, among others, signaled something new. These guys were killers, not gentlemen. The staid respectability was gone and the reason for its ejection was clear to Daney: the influx of cameras that flooded the stadiums as tennis became a televised event.

Armed with a new arsenal of visual utensils that could cut, pause, zoom, and slow, broadcasters could show more of the players’ movements than ever before. No longer able to hide from the camera, the quaint politeness that marked a gentleman was increasingly hard to fake. We see in agonizing detail the tics that indicated McEnroe’s boiling over of the competitive spirit. A shoulder slump, the way he lingers on a mark in the clay, a glare at the chair official that lasts just a fraction of a second too long: the camera betrays everything. McEnroe is just as much a product of television as of the professional circuit. It’s no use trying to fake nice when the slow-motion replay exists. The futility of hiding from the camera becomes the futility of hiding from oneself.

The peculiar brilliance of In the Realm of Perfection is how its claustrophobic shots and unsettling insistence on watching McEnroe’s tantrums congeal into a more personal exploration of what it might feel like to have your image stolen by the camera. Faraut shows us McEnroe posing with his cutout, a smiling replica probably produced by one of his sponsoring companies to sell to fans. McEnroe appears to approach it cautiously, maybe even curiously as he fiddles with this all-too-real embodiment of his marketability. In one scene, he even hides behind it to avoid the cameras – a habit he’s fond of doing, even on the court as he threatens reporters with a beating if they refuse to turn their cameras off.

He’s wary of being so seen so probingly, a strange idea considering how forthrightly he expresses himself on the court. But perhaps, like the manner in which he plays, it’s a control thing. If he’s going to balance on the razor’s edge of fury and calculated grace, he’s going to do it on his terms. He’s facing an enemy, however, that is unparalleled in its accuracy. The camera doesn’t miss an expression or a movement, there’s no point it cannot see and nothing it turns away from. By all appearances it probably shows us our truer selves. But we can hardly blame McEnroe for trying.