What’s the difference between a cubist cartoon and a cubist painting?

It’s a matter of perspective.

A cubist painting is cubist because it presents more than one perspective. A cubist drawing is a cartoon depending on the perspective of the person looking at it and whether they think there’s a divide between comics and fine arts. That’s one of the reasons I like John Pham’s graphic novel J&K. Its world is a colorful jumble of discordant perspectives, some literal, some metaphorical.

As Jay and Kay are walking home in the opening pages, a rush-hour crowd weaves around them. Some of the figures are standard cartoons with giant round facial features on giant round heads. But some faces are more inexplicable, doubling mirror-like along a horizontal axis instead of a vertical one.

Jay and Kay would fit into most newspaper funny pages, but their best frenemy Eggy’s face is composed of a dozen bulbous half-circles. Though peculiar, the fact goes without notice within the story world because the style isn’t all that different from the other characters. One of the guys cat-calling Jay and Kay has two mouths, and the other’s face follows the cubist logic of a Picasso portrait: three angled squares with a wedge of a mouth on the back of the head and a misplaced nose near the chin.

Pham’s landscapes are peculiar too. Sloping roofless buildings line the minimalist streets. The mall looks like a modernist architect’s incomplete blueprint. Many panel backgrounds are just a spray of vibrant color with little illusion of depth. Pham changes styles for the video games, creating avatars of free-floating balls and pyramids that draw attention to the peculiarities of the story world through contrast. The environment reminds me of the subtle chaos of George Herriman‘s early 20th century Krazy Kat cartoons—which, depending on your perspective, should be hanging in the same galleries as Picasso and other artists of the period.

Pham also explores perspectives in the psychological sense. Like Picasso, he views things from more than one angle. That scary witch shuffling down the empty street toward you? Don’t worry. She just wants to give you a hug and a sweater. And those ghouls grabbing your ankles as they crawl from their graves? They just want to scold you for not being a better parent. Also, they’d be happy to babysit Wednesdays and Thursdays. Even the vampires at the mall you hurry past, they’re just depressed and lonely. Why don’t you hang out and talk with them for a while? 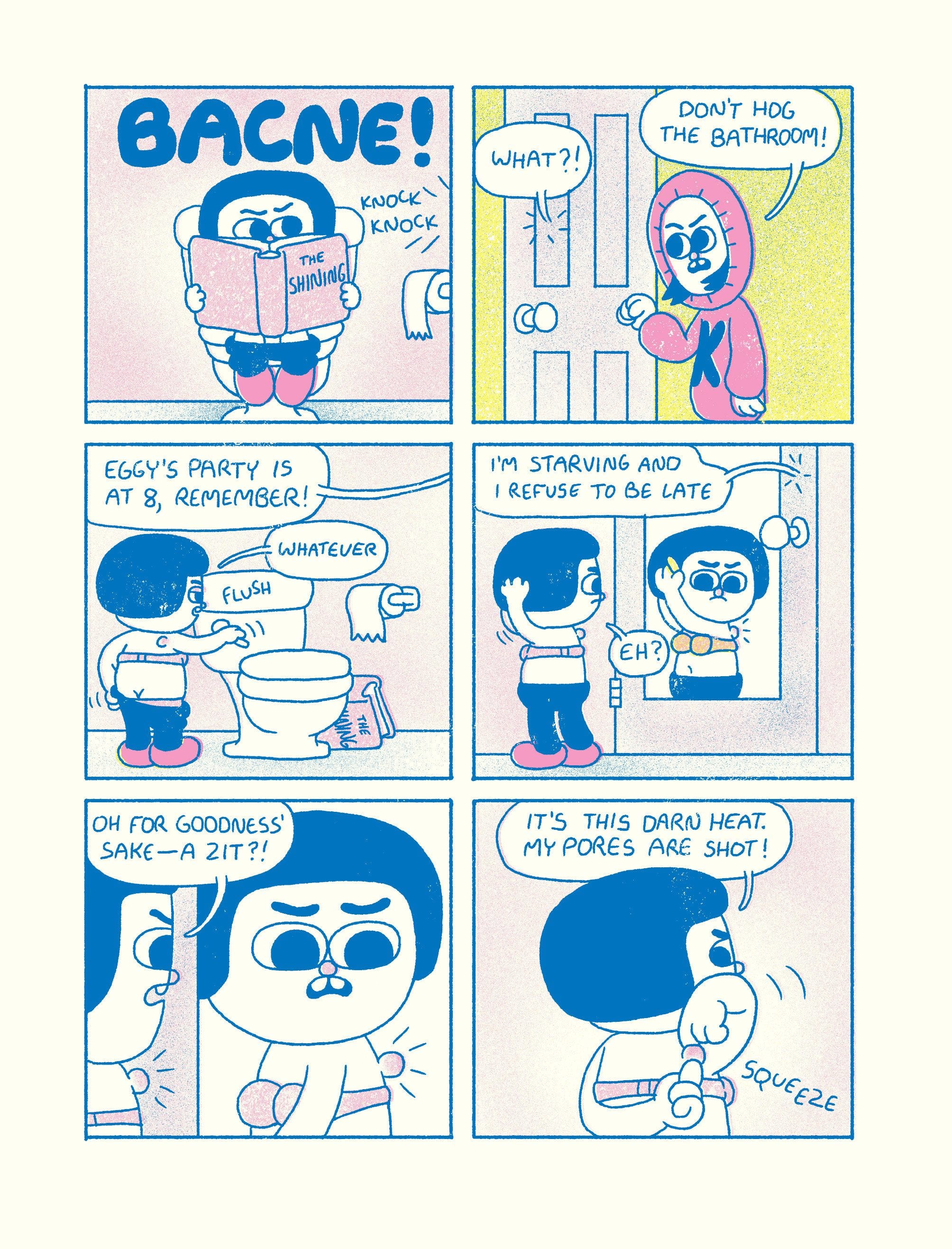 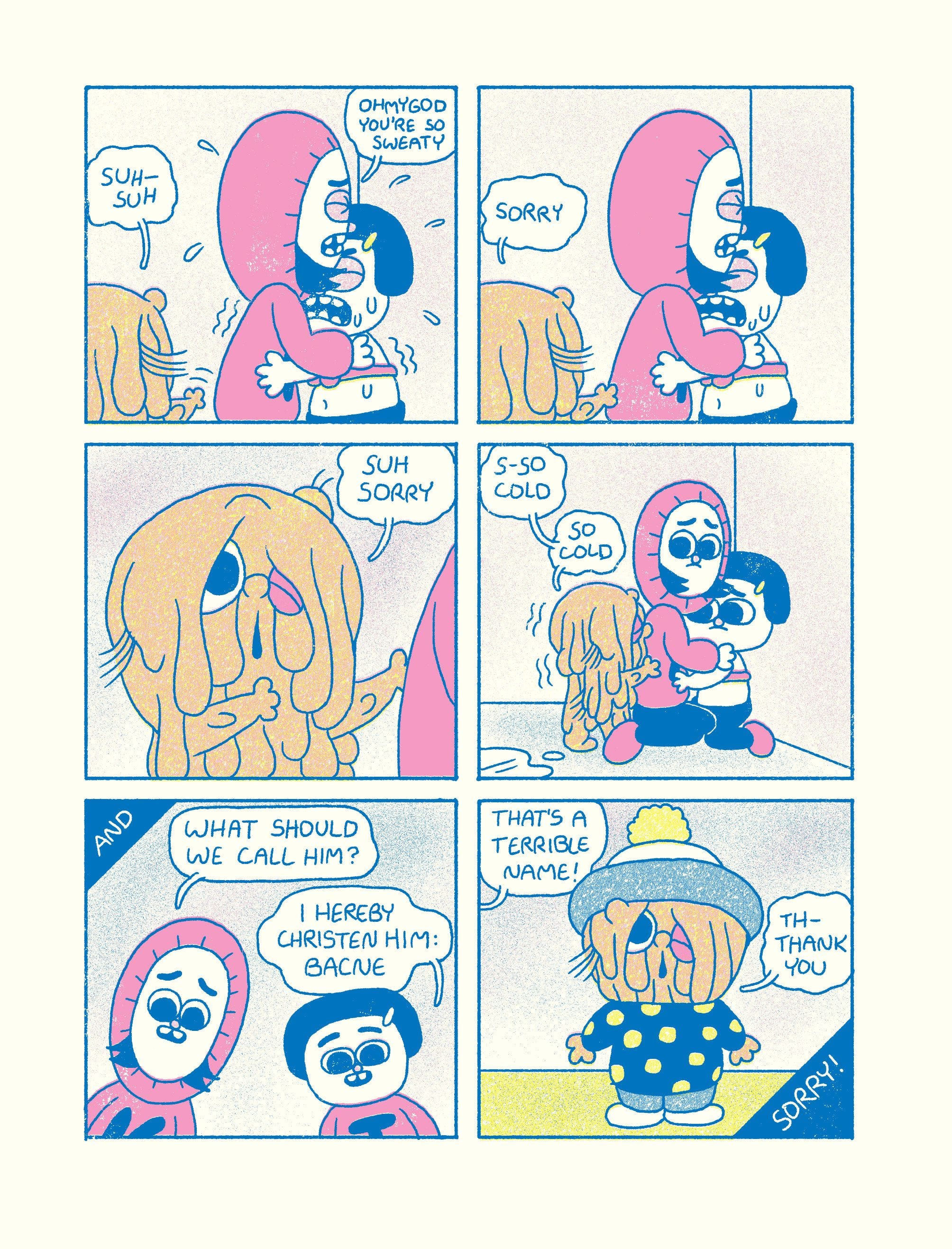 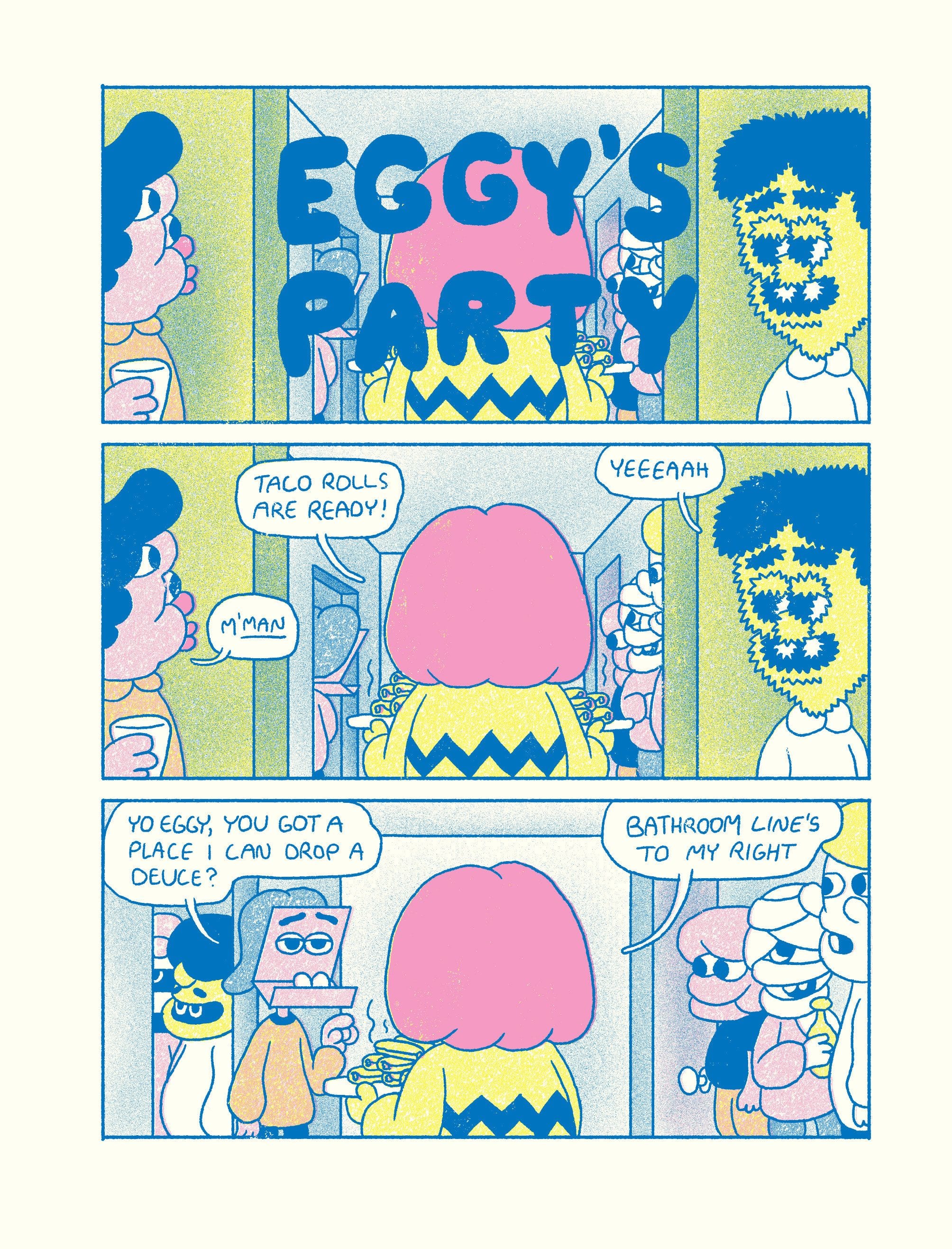 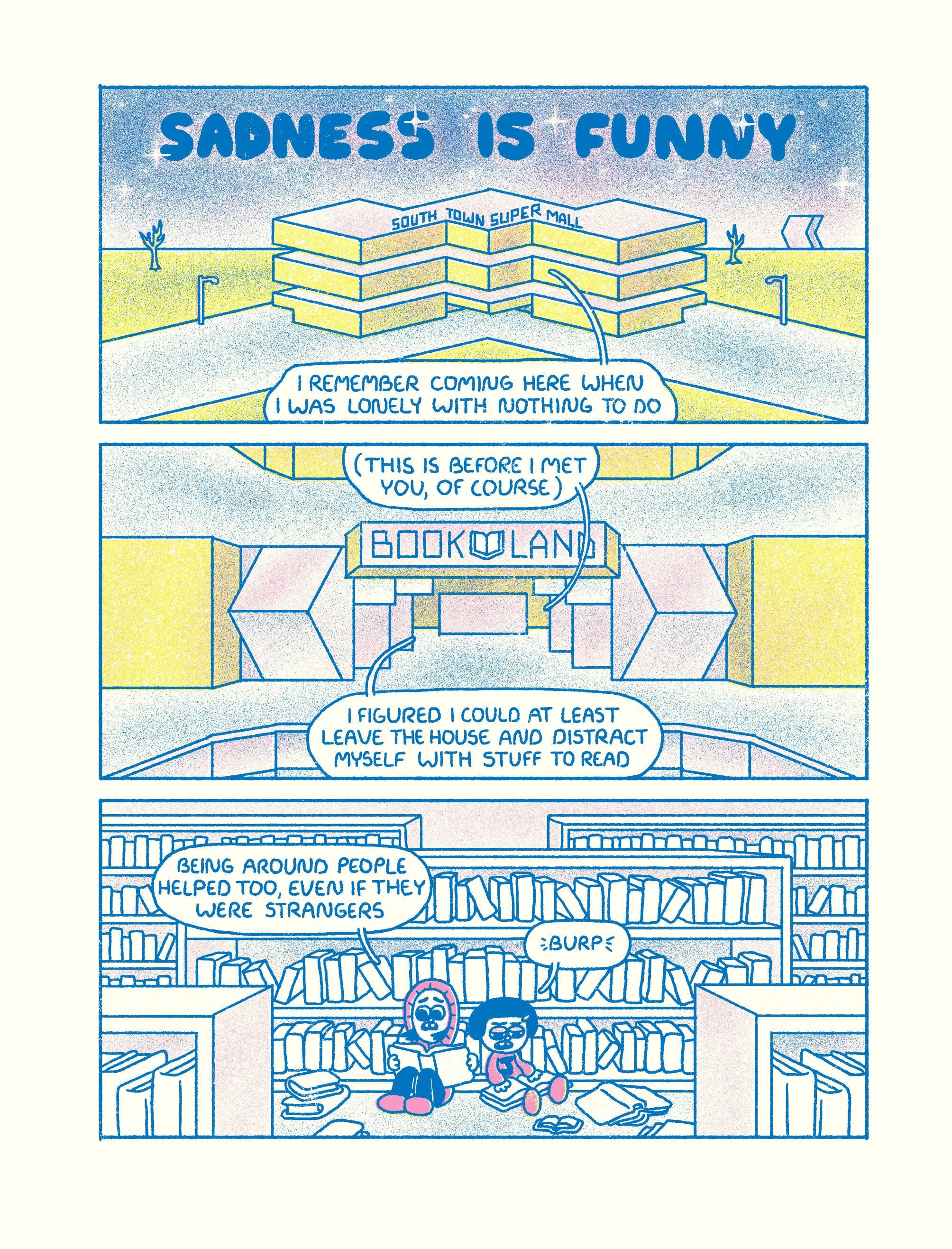 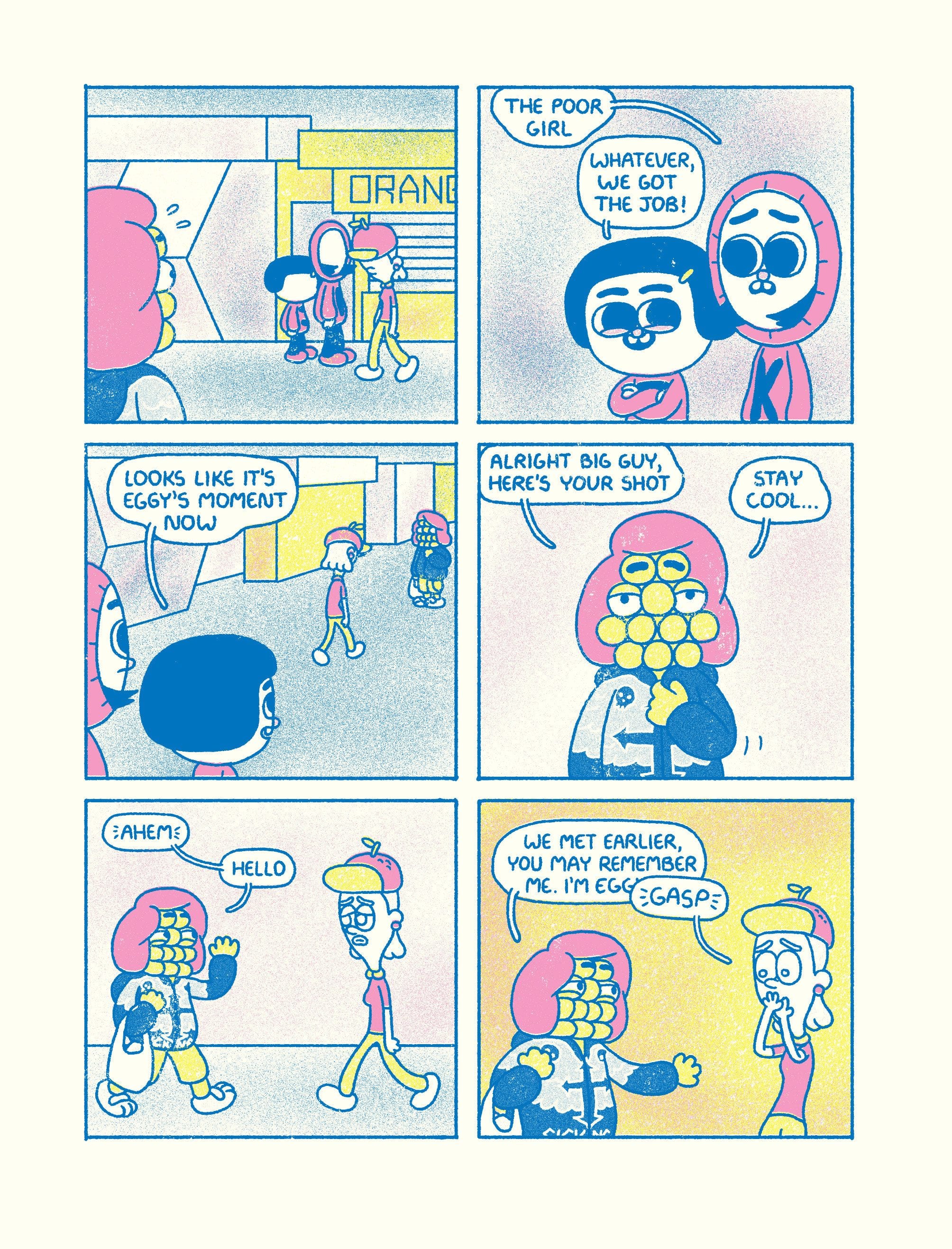 The graphic novel is structured as a set of discrete but linked episodes punctuated by full-page ads: laundry detergent, horror movie, video game player, cassette store, taco mix, the mall. Since each episode reflects events from the story world, the effect is both consumer critique and metafiction. The ads also add to Pham’s pastiche aesthetic, with every story element seemingly borrowed from some other real or fictional source.

Better still, the novel contains several mini-comics, including a copy of Cool magazine Jay likes so much, directions for playing Eggy’s video game Dance Warrior, and a vinyl single of Gaseous Nebula’s “Deep Space”. Like Kay, I don’t have the technology to play the song, but I agree with her when she explains to Kay: “I dunno. I just like having it.”

Pham’s pastiche also includes transitional words in the corner of panels (“And”, “So”, “Finally”) that could be lifted from any of Chris Ware’s graphic novels. He also swiped Eggy’s sweater from Shultz’s Charlie Brown. Eggy looks suddenly very Garfield-like when he transforms into a cat for the last fifth of the novel. That’s not a spoiler. There’s no narrative explanation for the change. Jay and Kay are also suddenly cats. Why? Pham’s apparent answer: well, why not?

It turns out the lives of cartoon animals and cartoon people are pretty similar. There was a pleasantly bewildering moment where I imagined the characters had been animals all along and I simply hadn’t noticed before, but a quick flip of the pages shows how easily Pham turns a cartoonishly round head of hair into cartoonishly round dog ears.

The characters’ inner lives change about as much as their visages. Jay and Kay remain oddly consumed with liquids. Previously Jay was upset about her back sweat, and Kay about the drizzle of snot down Jay’s face when she was crying about her parents. Now as cats they wander the neighborhood drinking from dog bowls and bathtubs. Instead of shoplifting from the mall or stealing tacos from Eggy’s party, Jay and Kay go to the park and accidentally pee on beds. They still don’t like Eggy though.

There are plenty more oddities (the baby-like creature that erupts from Jay’s back acne is a biggie), but the overall tone is a wandering sadness as disconnected characters fail to find meaning in a cartoon world devoid of either literal or metaphorical depth. Even the unexpected death of a main character only confirms the novel’s background hum of loss.

Of course, Eggy drives away the woman he asks out because he’s wearing a cross and doesn’t realize she’s a vampire. Of course the one-armed army ghoul rebuffs Jay’s attempts to bond with him because her father was a vet too. We never find out what exactly happened to their parents, presumably because it doesn’t matter. They’re still absent.

Seeing the world from multiple perspectives doesn’t make it a happier place. Cartoons, Pham reveals, are flat for a reason.