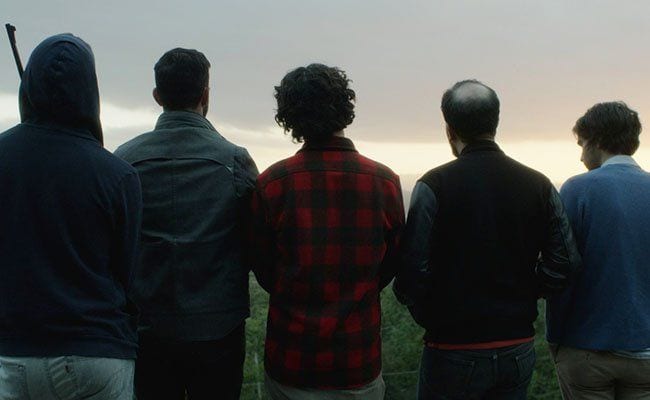 Joshy refers to the film’s titular character (Thomas Middleditch, Silicon Valley) whom, four months after suffering the abrupt end of his engagement, is nonetheless invited by some buddies to a weekend retreat in Ojai, California: a destination once set for Joshy’s bachelor party, but now to be used as a mellow hang in support of their broken-hearted friend.

However, as with so many parties, Joshy’s well-being becomes a mere pretext for an outright romp dictated by two nerdy but nonetheless alpha bros, Eric (Nick Kroll) and Greg (Bret Gelman). Despite meek pleas by Adam (Alex Ross Perry), a germaphobic gamer, and Joshy himself, plans to play an all-night board game entitled “Mecha Dungeon Crawl” are supplanted for a bender of drugs, liquor, bar hopping, and typical bacchanalian palaver.

Fortunately, the debauchery never becomes the heart of Joshy, thereby setting it apart from the fray. Joshy is perhaps best viewed as a revision of The Hangover, and several other weekend bromances borne out of Hollywood machinery all too eager to imitate, if not advertise, the illusory notion that senselessly participating in fraternal rites of passage will lead to happiness, and success. Against this rotten grain of thought, Jeff Baena’s mumblecore / dramatic blend is refreshing for those who find the best parts of a party in its quieter, more intimate pockets.

Dramatically meaningful party films such as this are often nurtured by a well-developed female character who’s more than merely an object of men’s desire. In Joshy, Jenny Slate fits the bill. As Jodi, who forms a fast friendship with retrodden new-dad Ari (Alex Perry), Slate develops an effortless rapport of sharp wit and tomboyish devil-may care with the rest of the crew. However, what distinguishes Slate from more mainstream supporting roles in party films is her humor is a little more understated, and her decision-making is lingeringly reluctant and scrupulous. Both Jodi and Ari pursue their flirtations from self-generated moral terms, which is not only more dramatically interesting than the usual fare, but also eliminates the need for a ruinously artificial deus ex machina.

Indeed, Joshy does its finest work at the edges of Eric and Greg’s endless supply of debauchery. This is not to say that watching a band of seasoned mumblecore actors imitate drinking, smoking, and shrooming with aplomb isn’t entertaining. But the film is sufficiently self-aware to know its heart lies in quieter moments and therefore regularly gravitates toward them.

Typically, the best scene for Josh’s crew’s first night should be the coveted late night “hot tub” excursion. But the water, if you will, never gets hot enough. References quickly turn from sexy banter to Twin Peaks, and before long the crew is out of the hot tub and inside the house discussing hip-hop, history and time travel. In this regard, Joshy has an assuredness in its characters’ droll personalities (and actors, for that matter) to entertain without gimmicky party tropes.

This is not always the case, however. Both Kroll and Gelman’s efforts to channel their relentless party bromance feels strained, and one gets a sense that they too would rather settle in for a David Lynch marathon or maybe a long game of “Mecha Dungeon Crawl”. Surely, a feeling of forced effort is part of the film’s theme: this idea that people will do anything to keep the party going well past an honest if not more enjoyable low key evening with their friends.

There’s nearly a half an hour given over to this feeling, particularly in the final act when Eric and Greg start to command their epic intentions to a crew that’s no longer listening. This is the point where most want to leave the party, but it shouldn’t translate into wanting to leave the film. Joshy continually recovers itself, including in its final act, by returning to its lovely geekiness, moral awareness, and pathos for fading youth — all of which are captured by its main cast, particularly Middleditch near the end when, he grasps greater control of the story.

By failing to fully embrace its characters, however, and in lieu of only lightly revising its Bachelor Party genre, Joshy succumbs too much to its party dynamic. The audience never gets to know its characters outside of typical Gen-Mil archetypes, or partiers with a more sensitive side. That may be the way most parties pan out, but this doesn’t translate into a truly great party movie along the likes of Computer Chess, in which every party scene speaks volumes about its uncompromisingly quirky participants.