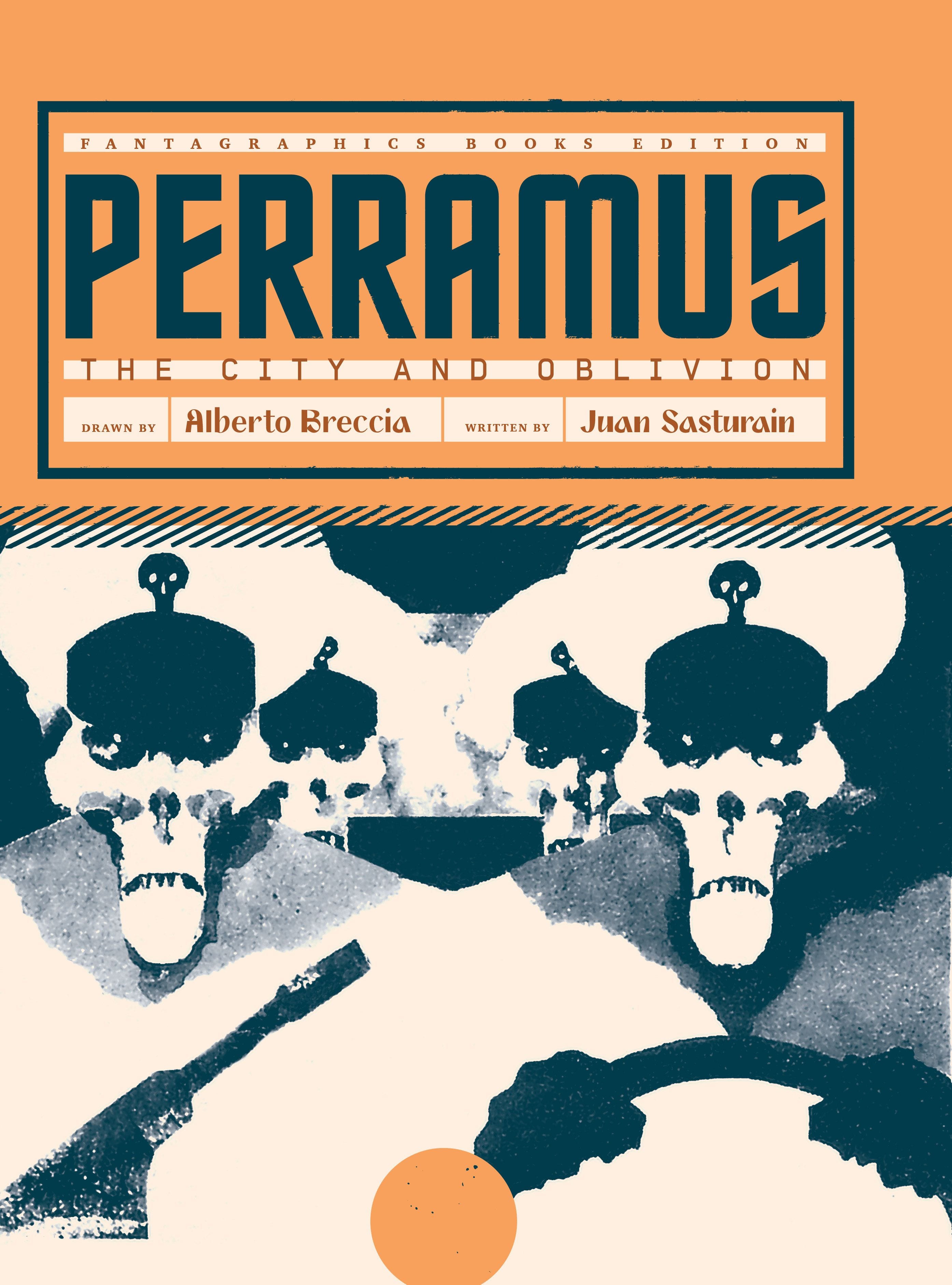 From 1976 to 1983, the US backed a brutal, anti-communist coup and dictatorship in Argentina that disappeared thousands of so-called subversives in the name of preserving social order. Perramus: The City and Oblivion was conceived in the regime’s penultimate year and published in Europe the year after its collapse.

The novel’s title character—an amnesiac who assumes the name of the clothing manufacturer he finds on the label inside his borrowed coat—embodies the psychic toll Argentina suffered. The novel’s absurdist narratives map a parallel universe that reflects the real-world horror of the authors’ home.

The fabric of that universe is rendered in artist
Alberto Breccia‘s eclectically surreal and monolithically black-and-white style dominated by painterly brushwork is alien to most mainstream US and UK comics of the same decade. While conforming to rigid three-row layouts with unframed and uninterrupted gutter edges, the textured interiors of Breccia’s panels are revolutionary in their combination of precision and expressionistic energy.

The art in Perramus is so good, it could be extracted and framed on a gallery wall. An afterword lists Breccia’s range of materials and techniques (“ink, acrylic, graphite, collage, scraping, staining, dripping, etc.”), but that variety remains unified by his signature line and the printer’s unvarying grayscale. While faces dominate his frames, Breccia imbues buildings and landscapes with equal energy, often pushing toward complete abstraction.

Fans of US comics artist Bill Sienkiewicz should recognize a kindred spirit in the flamboyant vacillations between jagged cartooning and detailed realism. The direction of influence is difficult to determine since the first book of Perramus appeared in 1984, the same year Sienkiewicz departed from his derivative Neal Adams style to produce his ground-breaking New Mutants artwork.

Breccia’s subject, matter, however, outstrips the Marvel superhero scripts that curtailed Sienkiewicz. Though Breccia evokes Argentina, the world of his art is its own country, one especially apt for communicating his nation’s political dystopia.

It’s no surprise that the project originated with Breccia, who approached Juan Sasturian, an accomplished writer but new to the comics form, to produce a script, which the two revised together. Originally Perramus was an 80-page graphic novel divided into eight-page chapters. It was published serially before collected in a single volume. It grew into four distinct novels of increasing length, the last published in 1989.

Book One depicts an unnamed revolutionary escaping a military raid and then choosing to literally sleep with Oblivion (a kind of mythical goddess). After conscripted by the military to dump disappeared objects at sea (including himself), the renamed Perramus escapes with a sidekick, Canelones, into a sequence of absurdist adventures as he follows the out-of-date guidebook left in his coat pocket by a previous owner.

Soon, he’s on an island-nation freeing a complacent political enemy and then decoding a Borges sonnet for secret messages. There’s a movie company in there too—one that produces only trailers to scam investors. The effect is eclectic chaos papering over a violently meaningless abyss.

The next three books provide clearer conceits for the nihilistic antics. The second sends the team—Perramus, Canolones, and the Enemy—to protect the six citizens of Santa Maria who secretly possess and safeguard the soul of the city, which is in danger of literally vanishing if the authoritarian regime kills them first. The fourth book returns to the island-nation of the first book, where the heroes join forces with a secret circus to combat a capitalist takeover literally fueled by the island’s harvesting of bird shit.

The last and longest book is the most light-hearted, written seven years after Argentina’s restoration of democracy. Now employed by real-world novelist Gabriel Garcia Marquez, the heroes must track down the missing smile of the nation’s most beloved actor—or, more literally, purchase the scattered teeth of his disinterred skull.

As much as I admire Breccia’s art and Sasturain’s dystopic narrative scope, their collaboration is marred by a dated misogyny most apparent in a reflexive focus on prostitution. When Perramus escapes the military raid on page one, he travels immediately to a brothel, where he chooses between three sex workers—Pleasure, Luck, and Oblivion. The last also narrates the one-page epilogue, the longest sequence of speech balloons for a female character in the entire collection.

The first of Santa Maria’s soul-carriers is the “most famous and cheapest whore in the neighborhood”, who only accepts antique coins from before the dictatorship. The fifth is an elderly Dona Juan who competes on a TV show to complete “six consecutive couplings” with “a minimum of” violence in a half hour. It’s a challenge because each woman is considered so ugly: old, fat, skinny, small, and legless. He is successful until the last, who is unexpectedly beautiful, and when he fails to ejaculate, the crowd roars, “FAGGOT!!!”—unaware that he has fallen in love for the first time in his life.

Perhaps the authors matured a little in the mid-’80s, since the last two books are free of prostitutes and overt sex scenes. Canolones does receive a peck on the lips from an Arab woman he saves from white supremacists in Paris. A turbaned friend translates: “She’s very grateful,” and the two literally sail off together in the chapter’s closing panel.

After the previous books’ exploitive excesses, the notion that a woman will repay a violent male savior with sex might seem comparatively quaint. The chapter is titled “Coquetry”. The translator, Erica Mena, also assures readers in an ending note that Canolones’ name in the original work, the Black Boy (“el Negrito”), is “completely innocuous and inoffensive” in context.

Although not all of Perramus translates well into our contemporary English context, most of it does. The narrative and visual details are a surrealist kaleidoscope, entertaining on a first viewing and further rewarding on a careful second. (There are also extended cameos by Frank Sinatra, Fidel Castro, and Ronald Reagan.) I look forward to Fantagraphics’ next publication of Breccia’s seminal works.