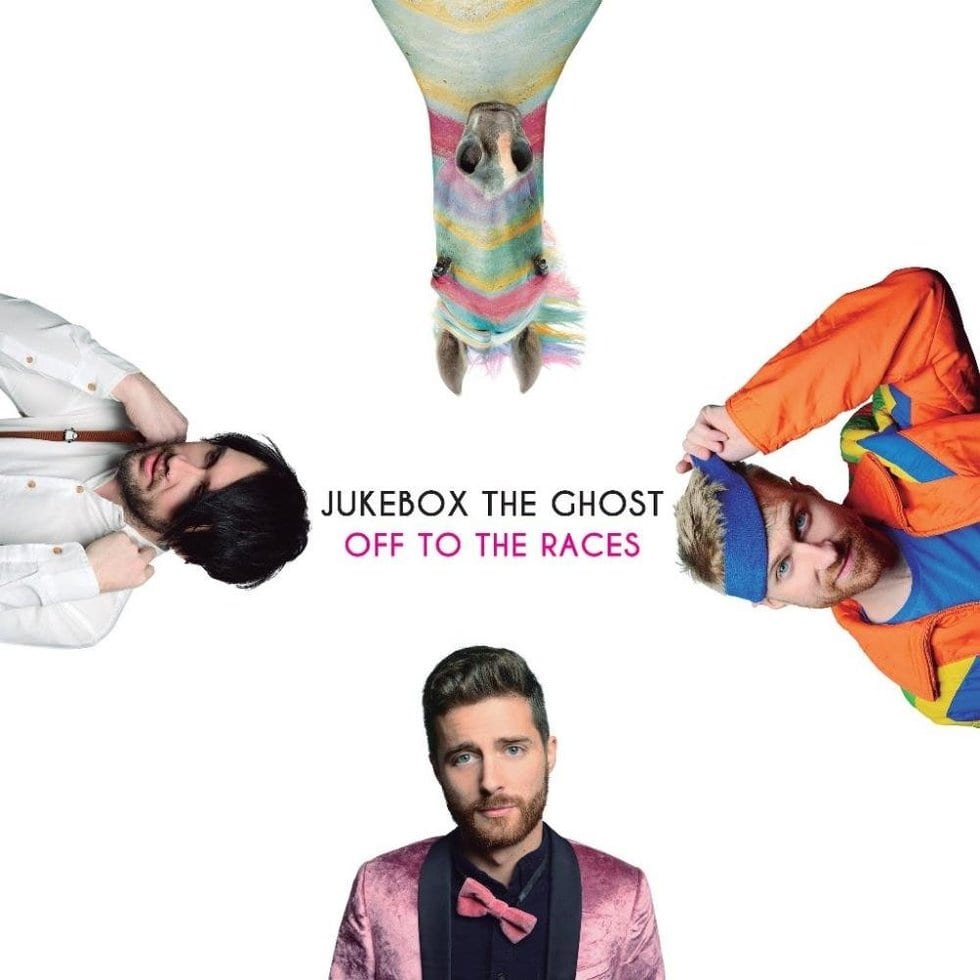 Off to the Races, Jukebox the Ghost’s fifth album, begins with good news for any fans of the band’s first two records. “Jumpstarted” is a ridiculously ornate, complicated song that somehow bridges the gap between the theatrical rock of Queen and the hip-hop-inflected piano rock of Matt and Kim. Yes, after two albums of leaning increasingly heavily into the pop side of their sound, Off to the Races finds the band reclaiming some of the weirder sensibilities that made their early work such a treat.

And it doesn’t get weirder than “Jumpstarted”, which opens with a multilayered harmony and a simple piano accompaniment as Ben Thornewill sings “Strictly business, nothing more!” After 20 seconds the harmonies fall away, and Thornewill sings a solo over a lightning fast piano figure that cruises up and down the keyboard over a simple left-hand accompaniment. This section concludes with Thornewill pleading with the woman of his affection to “Take my advice / And run while you still can.” At the word “can” the song kicks into its main piano-pop groove, with a strong backbeat from drummer Jesse Kristin. As the song continues the vocal harmonies flit in and out (the band reportedly recorded over 100 different vocal tracks for this single song) while the fast piano figure also returns here and there. The song even contains a pair of what are essentially hip-hop breakdowns between the verses, with groove-heavy beats from Kristin and more dense harmony vocals instead of rapping. In just four minutes and 20 seconds, the song also finds time for a synth solo from Thornewill and a guitar solo from Tommy Siegel. After all this, the song ends with Thornewill reiterating “Take my advice / And run while you still-“, without finishing the sentence.

If that description makes “Jumpstarted” sound like an absolute mess, well, it kind of is. It took several listens for the song to snap into focus and for me, as a listener, to get on the same page with what Thornewill is doing in the song. But it’s as full of strong musical hooks as it is oddball left turns, and that combination makes it a delightful experience… eventually. It’s a big swing for Jukebox the Ghost, which is great, because the biggest chance the band took on their last record, 2014’s Jukebox the Ghost, was letting drummer Kristin sing a little bit for the first time despite knowing he has a below-average voice.

The rest of the album doesn’t get anywhere near as strange as “Jumpstarted”, but it sets a mood of daring that lingers in small ways throughout. First single “Everybody’s Lonely” is a meta-reflection about “Why’s every song about love / Or drinking too much / Maybe that’s because / Everybody’s lonely.” It’s similar in subject matter to 2014’s “Hollywood”, but this song cuts a bit deeper lyrically. Musically it’s more interesting thanks to a Broadway-inspired 6/8 intro and a couple of intentionally weird instrumental breaks in between the big sing-along chorus. Thornewill also finds success with “Fred Astaire”, which has a great, herky-jerky vocal structure in the verses. The chorus is interestingly arranged, too, with Thornewill’s vocals and handclaps providing one hook and a simple but catchy piano question and answer figure filling in the spaces between the singing.

Tommy Siegel’s three songwriting contributions to Off the Races range from middling to great. “People Go Home” is a run of the mill power pop song about the day-to-day grind of a working adult. “People go to work, and / People go home”, is not a great refrain, and the song never really comes around to an interesting point. If there’s anything notable about the song, it’s that Siegel is playing a full bass part in addition to his usual guitar duties and that Thornewill seems entirely absent from the track aside from backing vocals.

“Boring” covers adjacent territory, as Siegel begins by complaining about how his friends are having kids and moving out to the suburbs. “Everyone is boring / Everyone is lame / Everybody thinks they’re not the same”, goes the first half of the chorus, but it’s immediately followed by, “Let’s get old and boring / Let’s both become lame / Get a house and kids and change your name.” Suburban malaise is hardly new territory for power-pop, but Siegel is genuinely wrestling with the young adult’s disdain for suburban trappings and acknowledging the appeal of those trappings as he becomes not so young. It’s also worth noting that Thornewill is present here, playing a very simple bassline on the piano.

Siegel’s album highlight is “Diane”, an upbeat, acoustic guitar-driven track that could easily pass for a late ’90s standout from Fountains of Wayne or Phantom Planet. This is one of those songs where the verses are just as catchy as the refrain, and the relatively sparse arrangement makes the bass guitar very welcome here, as well as the subtle synth backing from Thornewill.

As for the rest of Thornewill’s tracks, he continues to make interesting sonic choices on his songs that make even the boldest pop statements just a bit off-kilter. “Time and I”, with its huge chorus and omnipresent “Ah ahh ahh ah” backing vocals, could have been maximum hooks for its entire three minutes. Instead, the song has a real sense of dynamics, starting quietly with the “Ah ahh ahh ah” melody in the piano before the rest of the band comes in. The presence of a simple snare rim click as the only percussion in large sections of the song is also a striking choice. There are also prepared piano and pizzicato string breaks sprinkled throughout. “See You Soon” could be a typical piano power ballad, but Thornewill again spikes the song with smart arrangement ideas, spreading his opening bittersweet piano melody around acoustic guitar and several other instruments. It keeps the song from being an earnest but familiar slog.

Jukebox the Ghost’s second album, Everything Under the Sun, was so strong that it seemed to portend a long career as a band with a big cult following. But then Safe Travels didn’t quite live up to those expectations and Jukebox the Ghost at times seemed to be cynically chasing one-hit pop bands like Capital Cities for chart success. Now the band seems to have found a level of equilibrium between their penchant for pop hooks and their diverse set of other influences. Off to the Races is a big creative success for Thornewill, Siegel, and Kristin, and it should please existing fans and possibly draw in new ones.