In the early aughts, Junkie XL became a worldwide sensation with his remix of Elvis Presley’s “A Little Less Conversation”. With its combination of rousing electronica and the King’s sensuous vocals, the song became so ubiquitous that it still pops up in films and television shows today. A perfect fit, given that in the second act of his career, Junkie XL, born Tom Holkenborg, is among most sought after film score composers. He’s been writing film music from early on, working on Dutch films and contributing additional music to Tony Scott’s Domino (2005), and collaborating with composers Harry Gregson-Williams, and Hans Zimmer in scores like Christopher Nolan’s The Dark Knight Rises (2012) and a remix for Inception (Nolan, 2010).

His score for George Miller’s Mad Max: Fury Road (2015) became instantly iconic as it was incorporated in the film as both accompaniment to heighten the plot’s thrills and also diegetically, as some of Junkie XL’s guitar riffs seemed to be played live by one of the film’s most outrageous characters. In his score for Robert Rodriguez’s Alita: Battle Angel (2019), Holkenborg foregoes the sound we’ve come to expect from him to instead deliver a lush orchestral score. The film centers on the discarded female-presenting cyborg of the title (played by Rosa Salazar), who is given new life by a heartbroken scientist (Christoph Waltz) seeking to bring his dead daughter to life.

Even though Holkenborg is a classically trained musician who learned piano as a child, people associate his name with thumping club music. His album Radio JXL: A Broadcast from the Computer Hell Cabin featured collaborations with Dave Gahan of Depeche Mode, DJ Sasha, and Robert Smith of The Cure, so audience members might be surprised to listen to this side of Holkenborg.

PopMatters speaks with him about his process, experimenting with an orchestra, and some of his favorite film scores.

How does the process of composing a film score differ from writing music for your own albums?

It’s quite different from being an artist, which I was for 25 years before that. In an album, you can do pretty much whatever you want, while with a film you have a story and the music needs to be an arc throughout the film, it needs to underscore whatever the movie needs. Usually, you read the script, watch the film, and talk to the director about things he finds important, and then in my world, my brain starts working. It’s usually either a process of elimination or a process of creation, at one point you have in your head what you need to do, and you need to do it.

There’s this melancholy throughout the whole film, we see the doctor trying to bring his daughter back to life through Alita, and then realize she’s meant to have her own life as a warrior. The scope of the film is epic, but the score is intimate. How did you achieve this dynamic through the music?

First, thanks a lot. If you pick up on that, it’s basically what I wanted to achieve. I wanted to have a personal story of Alita being the throughline, and it’s very easy with a film like this to create a world comprised of all the worlds that the film takes place in. But at the same time, you might lose connection with the main character. After experimentation, it seemed that very organic instrumentation did the trick, to keep you leaning into the story and what she was feeling. The whole score is meant to be [seen] through her eyes.

Alita: Battle Angel is a multi-genre movie, there’s action, romance, sci-fi, a political allegory. What are some of the challenges presented when it came to composing a score that was cohesive, but also touched on so many different elements?

That’s true and again it comes down to a process of elimination. The world in the movie is awesome, but the movie is about her story and her coming of age. That was the most important thing for everyone who worked in it, everything else came secondary. There were moments when I included the brutal sounds of the world, but I always asked myself: does this serve the story? If the answer is no, you reconsider the plan.

Do you get a visceral feeling when the answer is yes?

There are multiple eureka moments throughout the process. When you see the movie for the first time and it’s unfinished, there’s lots of green screen and the CGI Alita wasn’t even in it, but that’s when I get an initial response. It’s a smaller version of what you experience when you see it in the movie theater. Unfortunately, I don’t have that luxury, I never see the film completed, so when you watch it at the premiere you can’t have that feeling of watching it for the first time.

The hardest thing to explain to people who aren’t in the industry is that yes, they’re consuming a film from beginning to end, but sometimes it takes from four to six years to complete a movie like this, so it’s hard to step away and watch it objectively. You’re so caught up in the process. 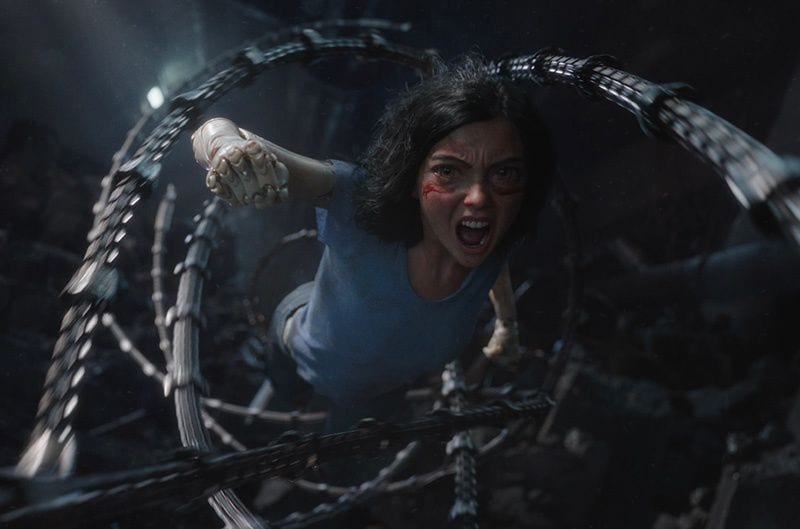 Do you have moments after watching the final version when you wish you’d done something different?

Of course [laughs] and I think that’s a healthy response. There’s not a single movie I’ve scored where I haven’t gone “oh man, why didn’t I do this?” and there’s moments of pride as well, but mostly you see the missed opportunities. The idea is to learn from that and take it into your next film.

The final scene in the movie has this rousing piece of music in constant crescendo that leads us to the idea of a sequel. There’s been talks of sequels, so I wonder how much does that influence your score for the first chapter? Are you already thinking of what motifs you’ll be able to expand later on?

That’s a very good question; when you work on a movie like this there’s a strong demand from the studio that if it’s successful you need to make a second or third one. So, on one hand, you think about it, but also you need to finish the movie you’re working on because if this doesn’t go well there won’t be a second or a third. When you’re working on a movie like this you’re thinking, “can I extends this?” with a piece of music, but it doesn’t keep me up at night.

When people see your name in a movie they expect electronica, but you went for a full orchestral sound for Alita: Battle Angel. What did you learn from working with an orchestra?

It’s probably my most orchestral score and for me, it’s very simple: you can express yourself with an orchestra, with electronica, or with an accordion and a recorder if you want to. It doesn’t matter what instruments you pick, in the end, you can always hear yourself. So the question is how to make the orchestra do things that really define me as a composer or musician. I love the orchestra. In my career as an artist I always used organic instruments and strings, so it’s great to find a combination between this vast experience of an orchestra and sound design with synthesizers.

The film is set in a border town, which made me think of Henry Mancini’s work in Touch of Evil and other films like Casablanca. Did you listen to any scores for reference?

I watch a lot of movies and TV shows, whether it’s really old stuff or new stuff. The use of music has changed drastically, but my favorite period is the late ’40s going all the way into the ’60s, where music had a really unique role in film, mostly because sound effects weren’t as well developed then as they are today. During this time music had to do more than just be music, and there were so many interesting ideas developed at that time. Most of them aren’t used anymore, but there’s a really great way to revisit the scores of the ’50s, see how they worked, and do your version for 2019. If you were to do a full-on Bernard Herrmann score it would sound hopelessly old fashioned today, but there are elements in there that are very valuable.

[laughs] First a really good synthesizer score which is Blade Runner, but I’d also bring a good orchestral score like Herrmann’s Vertigo which is great, and for even older let’s bring the score for the first King Kong from 1933.

One of my favorite things about going to a Twentieth Century Fox movie is I can listen to that Alfred Newman fanfare play at the beginning. As a music buff and a composer, were you excited or intimidated when thinking about composing the very first piece of your own music to follow Newman?

These are legends that are hard to live up to. After the fanfare the Fox logo turns into a modern logo so the music there is very sound design-y and dark in nature for 30-40 seconds, so by the time my first orchestral notes come in we’ve forgotten about the great piece of music from the logo, and I feel less ashamed to bring in my strings [laughs].

What was it like working with Dua Lipa for “Swan Song”? You never worked together in person and met at the movie premiere, what was that process like?

It’s super easy, most of the collaborations I’ve done in the past didn’t happen in the same room, because of people’s schedules. Everything is done remotely, through Skype, emails, it’s extremely doable. Being in the same room is always great, but when that can’t happen you do the best with what you’ve got.

Robert Rodriguez is also a composer. Outside of the music for the movie did you talk about records and music you both love?

Actually, he did not. He gave me a lot of freedom. He gave me directions about where he wanted more intensity or less for instance. Other than that we mostly talked about cooking, because that’s our favorite thing to do outside of music. So we mostly exchanged pictures of pizzas and BBQ, rather than records.

Did the movie inspire any new recipes?