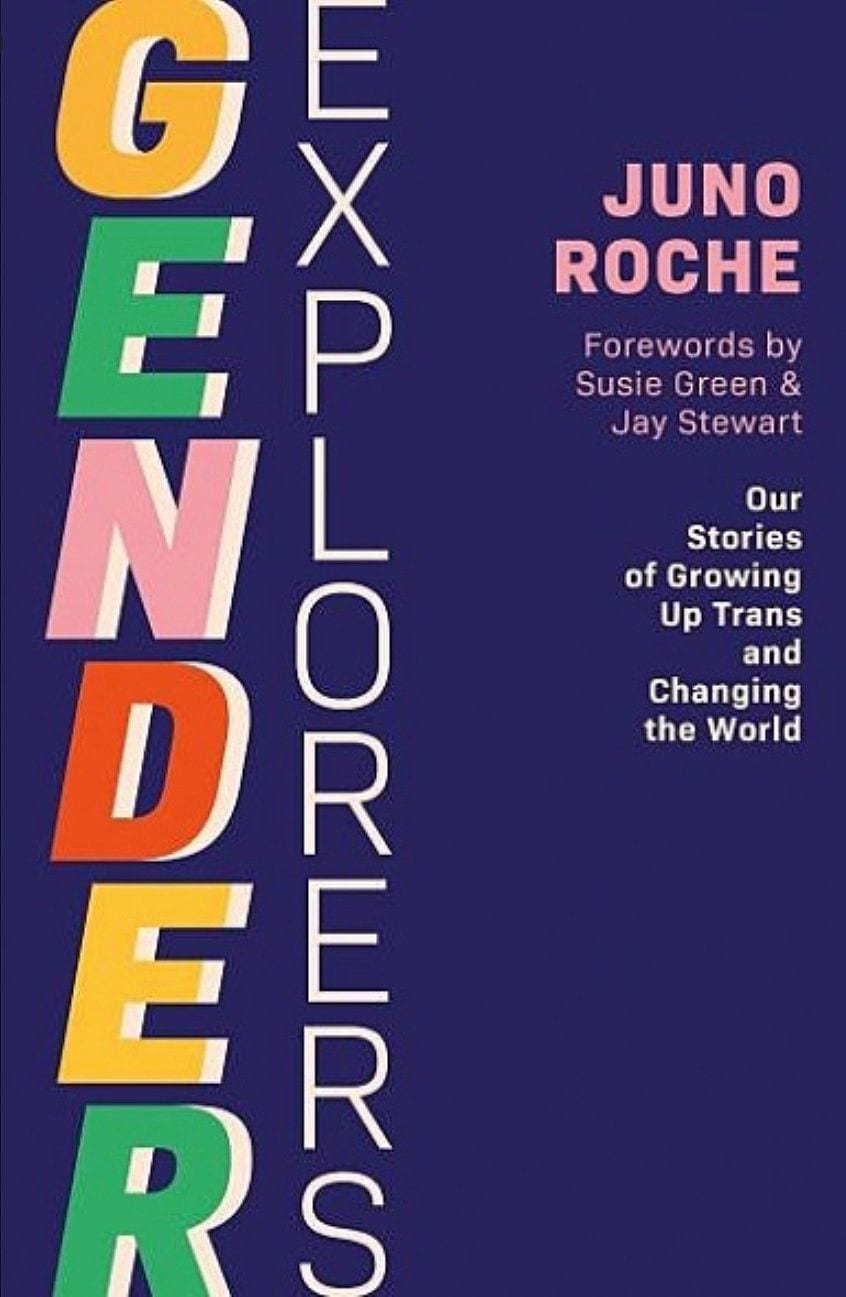 Gender Explorers: Our Stories of Growing Up Trans and Changing the World
Juno Roche
Jessica Kingsley

Juno Roche’s previous two books – Queer Sex: A Trans and Non-Binary Guide to Intimacy, Pleasure and Relationships (2018) and Trans Power: Own Your Gender (2019) – have been profoundly personal, weighty think-pieces: heady but rewarding engagements with trans and queer theory, deeply rooted in lived experience, that explore and challenge normative conceptions of gender. In both of these books, Roche interviews a range of other creative thinkers as the springboard for deeply conceptual discussions around what it means to be trans, especially in a world still shaped by a pervasive gender binary.

In
Gender Explorers, which Roche has referred to as the third book of the trilogy, their approach is different but equally rewarding. The subject matter is trans children. In countries such as the UK, US, and elsewhere, the rights of gender dysphoric youth to access hormones, puberty blockers, and to live safely as the gender they identify as, are at the centre of a maelstrom of political conflict and debate. But the very voices most needed and least heard in that discussion are those of the children and youth themselves. Instead, policy debates are dominated by adults, their positions invariably inflected by political agendas and interests of their own.

With
Gender Explorers, Roche aims to inject into the discussion the voices of those most affected by it. Over the span of a year Roche spent time attending family residentials, weekend youth clubs, and camps with the UK-based organizations Mermaids and Gendered Intelligence, both of which provide support for trans youth and their families. The interviews – at least 40 of which make it into the book – are presented in straightforward Q & A format, and include both joint and separate interviews with the children and their parents. The children range in age from five to mentors and facilitators in their early 20s.

In previous books, Roche is an active participant in their interviews, challenging discussants and drawing on personal experience for examples and insights. In
Gender Explorers, Roche adopts a different technique, posing broad questions and letting the children speak for themselves with minimal intervention. With the adults Roche is more direct, aiming to discern from the parents their varied reactions to their children’s coming out and how that has changed over the years.

The result is a fascinating, compelling, and inspirational insight into youth perspectives on gender and identity. The book is profoundly inspiring, and injects a tone of hopeful positivity into a public discussion which so often spirals into partisan viciousness. The children featured in the book have little time for politics or abstract debates; they’re busy planning their lives and working to achieve an authentic sense of self and identity. The tendentiousness of public policy debates falls away in the face of the children’s no-nonsense, matter-of-fact approach to understanding who they are and how they can achieve the lives they want. For them, it’s not a matter of partisan studies, statistics, and policy debates; it’s simply a matter of winning the right to exercise autonomy and sovereignty over their bodies.

As one trans girl observes, when asked what she would say to the adults in the conversation: “That they are happier being themselves and that it’s selfish making us wait until we are older to be ourselves…they are saying that we can’t make decisions until we are older, but I’m happy now.”

This is one of the great values of listening to youth voices in this discussion. For adults, public policy debates are often a miasma of emotion wrapped up with disputed statistics – in this case on an issue which doesn’t even personally affect them (beyond the degree to which they project themselves onto their children, or seek to exert control over their children’s bodies and decisions). For trans youth, asserting rights over their bodies and gender identities is part and parcel of the broader struggle to achieve autonomy in a world that so often denies it to youth. It underscores that discerning one’s sense of gender identity, and cultivating it in ways that help them thrive, should really be no different from the many other facets of identity in which youth must struggle to achieve autonomy and self-determination: sexuality, work, etc.

As in any other sphere, some youth may make mistakes, and some may change their minds, or acknowledge an uncertain fluidity of identity from the beginning. What’s remarkable is how self-perceptive the youth in this book are, aware both of the ways in which their lives are constrained by the fear and prejudices of adults, and the work they as youth have ahead of them in order to achieve the self-determination over body and identity that they require to thrive.

Needless to say, the interviewees are diverse in experience and attitude, but some commonalities emerge. What’s immediately striking is the degree of self-assertion and autonomy the children show. Contrary to sensationalist media and political narratives that claim trans children’s decisions are influenced by adults, what’s overwhelmingly clear is that these children take control of their lives and destinies from a very young age. Most of them discern the fact they are trans on their own, or through discussions with peers and friends, and often have to guide their own parents and other adults through the process of coming out, explaining what trans means, and outlining what their needs would be.

Sometimes they came out in person, engaging their parents in unexpectedly serious and frank discussion; other times they write them emails, trying to make the process as kind and gentle as possible for their parents. In the face of parents who often don’t know how to respond or had never imagined having a trans child, it’s sometimes the children who take the lead in talking to teachers and principals, explaining their preferred pronouns and their practical needs in the classroom and school. The self-confidence and self-assertion of the children represented here is remarkable, and inspiring.

Several of the teens emphasize that there is no single best, proper way of being trans: “Society is moving really fast. You’re transitioning and being trans doesn’t have to create any barriers for you. Don’t try to force yourself into any gender stereotype.”

Similarly, the non-binary sibling of a trans child observes: “Don’t hold back. Don’t try to please anyone but yourself and experiment if that’s what you need to do. Meet other people like you…I’ve spoken to lots of people who experimented and became part of a trans space, only to find out that they weren’t trans. But they needed that safe space to explore and express themselves in. That’s completely valid. That experimentation is important.”

Their parents, meanwhile, repeatedly emphasize the need to put love and acceptance first. As the mother of one trans teen points out: “You never get a second chance at a first reaction. Put love first, unconditional love first. Anything else can be worked out.”

What emerges through all of this is the picture of a young generation that has a starkly different understanding of gender from that of their parents’ generation. Trans, for them, is about transcending gender norms and binaries, and they are broadly united on the fact that there is no one proper or best way to do it: what matters is giving children and youth the right to pursue the unique gender paths that feel right to them.

And while several of the youth did experience terrible bullying of various kinds, what’s remarkable is how easily so many of their peers accepted them. Even for non-trans children, the coming out of their peers as trans or as gender-questioning/non-conforming is becoming more normalized, and the broad acceptance many of them encounter is heartening.

Their parents are frank about their difficulties in understanding and accepting these changes. Most of them were raised in a world indelibly shaped by a seemingly intractable gender binary, and some admit it took months or longer to accept their children and their decisions. The pool from which Roche drew their interviews – participants at group events by Mermaids or Gendered Intelligence – means that the parents being interviewed did eventually come round, but they describe in frank and emotional detail their struggle to do so.

One can’t help but speculate whether it’s the immediacy of these parents’ relationships to their children, and their drive to shape them in their own image, which inflected their early hostile and negative reactions. In some cases it’s the grandparents of trans children who are the immediately accepting ones and they eventually help the parents come to terms with the situation.

Gender Explorers is a must-read, and not just because it injects some of the most insightful and important voices into the broader discussion around how to build trans-inclusive policy. The perspectives presented in the book are vital to understanding the shifting youth perspective on gender – a shift which hopefully presages a broader shift toward inclusion and acceptance in society writ large. But above all, it’s a breathtakingly inspirational book, one full of hope, optimism and positivity. It helps put things in perspective by reminding readers that although adults and policy-makers may be in a hopelessly divided muddle over gender and identity, the kids are doing just fine. All they need is the right and the support to be who they are.