There are a dozen valid arguments to dismiss Jurassic World: Fallen Kingdom. All of the characters are dumb, which makes all of their decisions dumb, which leads to a cascade of inescapable dumbness. Chris Pratt and his intoxicating charm are largely squandered. The old ‘weaponized animal’ premise has been used to death (this reviewer is still waiting for sharks with laser beams on their heads). Dinosaurs rumbling through the jungle has long lost its novelty, largely because Spielberg did it so well in Jurassic Park (1993).

All of these arguments are 100 percent fair and irrefutable. However…

With the exception of Paul Schrader and his exquisite
First Reformed, J.A. Bayona might deliver the best directorial effort of the action/adventure/sci-fi Hollywood film of 2018 so far. His mastery of tone, visuals, pacing, and theme elevate what should have been a disaster into something worth watching and, astonishingly, sets the stage for a relevant sequel.

Things begin on a familiar note, with a kindly benefactor (James Cromwell as “Lockwood”, John Hammond’s former partner) organizing a return trip to dinosaur central. We don’t know Lockwood’s true motivations, but previous films in the franchise suggest that kindly benefactors are not to be trusted.

Isla Nublar, where the events of 2015’s ultra-boring
Jurassic World unfolded with painful predictability, is about to explode with volcanic fury. Lockwood needs Claire Dearing (Bryce Dallas Howard), who is now a leading dinosaur advocate, and Owen Grady (Pratt), who is now living off the grid in a fabulous new leather vest, to wrangle the dinosaurs and delivery them safely to a sanctuary island. 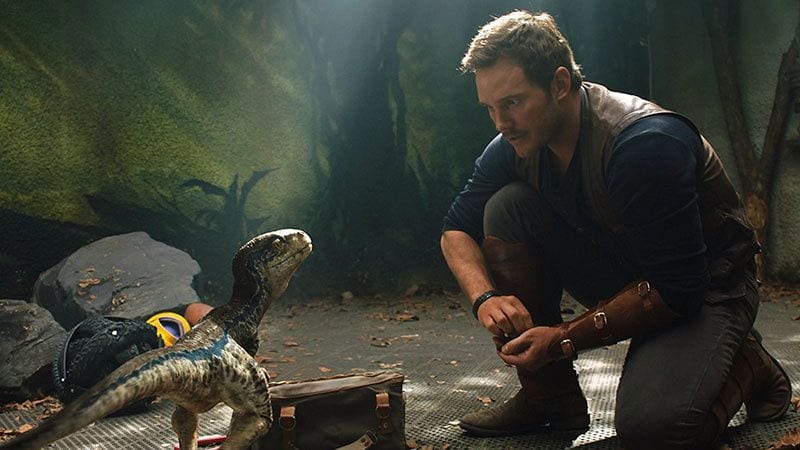 That Lockwood’s right-hand man, Mills (Rafe Spall), is obsessed with the capture of Blue, the ultra-intelligent Velociraptor that got to ride shotgun on Pratt’s motorcycle in Jurassic World, should set off flaming red flags for our heroes. Luckily, neither Owen nor Claire has seen the first four films, so they gleefully leap into the abyss. Rounding out the crew are a cowardly tech nerd (Justice Smith as “Franklin”), a sinister big-game hunter named Wheatley (Ted Levine), and a paleo-veterinarian (Daniella Pineda as “Zia”) who is most definitely not a lesbian, so don’t even bring it up.

The excursion to Isla Nublar comprises the first act and is highlighted by a spectacular action set piece when the island finally blows. It also concludes with a powerful visual from Bayona (A Monster Calls, 2016), as a Brontosaurus silhouetted in flames finally succumbs to the volcanic destruction. It’s a haunting image that will put a lump in the throat of dinosaur lovers.

Once the action returns to Lockwood’s estate, the wonderfully ridiculous plot kicks into high gear. A plan is uncovered that will combine Tyrannosaurus-rex and Velociraptor DNA to create a ‘super soldier’. Just as your eyes are rolling skyward at the mention of a dino-soldier, out walks the so-called “Indoraptor”. Make no mistake… Indoraptor is going to kick your ass! He’s vicious, cunning, relentless, and crazy as hell. Even his seemingly harmless nervous tic — tapping a razor-sharp claw on the floor — fills you with dread. Bayona’s terrifying creation makes you wonder if super-villains have been right about weaponized animals all along. 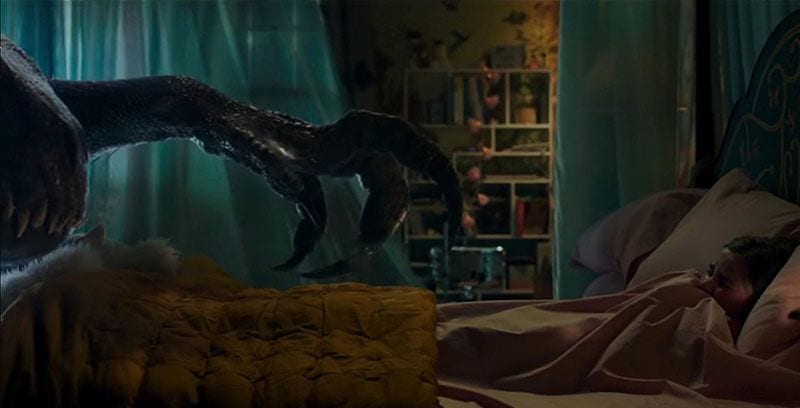 For the first time since Jurassic Park, there’s a director in the chair who understands the importance of pacing. Not just throwing frenetic action at the screen, but building a genuine sense of tension that carries you through the story. When Indoraptor silently stalks Lockwood’s young granddaughter (Isabella Sermon as “Maisie”), the lighting, atmosphere, and visuals are straight out of gothic horror. Shadows dance ominously on the wall as the trembling girl hides beneath her bed sheets. These are the thrills that have been noticeably absent from the franchise and it’s great to see them back.

Most importantly, Bayona understands the darkness churning at the heart of Jurassic Park. For all of its exhilarating highs and forgettable lows, this franchise is nothing more than an adventure-packed rehashing of the Frankenstein mythos. Man’s desire to (re)create life upsets the natural order of things and Ian Malcolm (blink and you’ll miss a cameo by Jeff Goldblum) gets to rejoice in the resulting chaos.

Bayona commits to this Frankenstein kinship with vigor, giving us spooky castles filled with secret rooms and mysterious passageways, and lightning-charged storms that make every shadow feel menacing. We also get a huge plot reveal that pushes the theme of ‘Man playing God’ to new extremes, and creates, for the first time since the original film, the necessity for a sequel.

Perhaps it’s to high of a praise to call Jurassic World: Fallen Kingdom the best Jurassic Park film since Spielberg’s original classic. It certainly requires a healthy suspension of disbelief to overlook the idiotic characters and nonsensical plot. Still, this is a solid actioner from a wildly talented director who isn’t afraid to take things in a darker direction, when necessary.