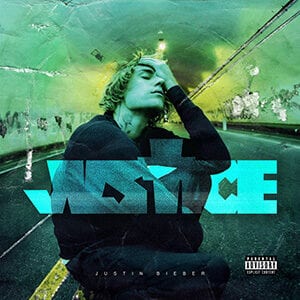 It’s hard to say, based solely on stylistic choices, whether an artist is or isn’t being vulnerable with their music. What is clear, however, is that singer Justin Bieber’s vulnerability sounds best when he’s riding the pop songwriting layout (than the rap/trap one). And that’s mainly what we get in Justice (2021).  “I know how it feels to be someone who loses the way,” he sings in “Hold On” — and yes, Bieber is on a good path with his music in Justice. The 16-track body of work has echoes of his previous albums, Purpose (2015) and Changes (2020), and fortunately, has more in common with the former than the latter.

In the same style of Purpose’s “Mark My Words”, Justice starts with the minimalistic “2 Much”. What follows, though, is a more ranged in sound set of songs — R&B (“Loved by You”), trap (“Peaches”), gospel (“Holy”), EDM (“Somebody”), dancehall (“Love You Different”), and more — that benefit from Bieber’s heart-on-his-sleeve singing.

Production-wise, perhaps the most intriguing song is “Ghost”— which is also a good lyrical moment of the album (“I’ll settle for the ghost of you / I miss you more than life”)—not so much for any of the sounds that prevail in it than for where each of them is placed. It meshes EDM and drum’n’bass, with an acoustic guitar in the chorus avoiding the obviety of the Alesso-reminiscent melody.

Acoustic pop, by the way, is again responsible for showing Bieber at his best as it did with “Love Yourself” (2015). This time, it’s with the romantic, beautifully crafted “Off My Face”. Songs like this and “Lonely” are a good display of Bieber’s vocal range: “Off My Face” flourishes in the higher notes in the chorus, while “Lonely” explores his lower register in the beginning.

Justice also features strong collaborators whose vocals and raps even steal the spotlight sometimes, like Daniel Caesar and Giveon in “Peaches”; and others like Burna Boy and Beam take already good songs like “Love You Different” and “Loved By You”, respectively, to an even better level. But perhaps the most felt presence in Justice besides Bieber’s is his wife’s, Hailey. She is in the best moments of the album (such as in “Unstable”) and in nearly every track as muse and receiver of Bieber’s gratitude. (Bieber has always been very vocal of the fundamental role his wife has played in his physical and mental health recovery from lyme disease and depression.)

Another name just as influential for Justice’s creative choices is Martin Luther King: the civil rights activist is sampled in two tracks. Although not really well contextualized along Justice’s romantic lyrics, the reference is obvious for an album released in 2021 (after a year marked by police crimes against Black people in the United States, followed by Black Lives Matter protests).  It’s not exactly a problem when an artist wants to deliver a big message, but that’s definitely not where Justice‘s strength lies.

Overall, Justice is better when Bieber takes the listener to his own room (although sometimes too literally — the album could do without lyrics like “Love you different’s” “I’ll treat you like a mother / Let’s make babies”) than when he’s reading the room. He shines in the most emotional songs and is competent in making you dance too. Placed in the timeline of his discography and of popular culture, Justice is more likely to be remembered as (one more) exhibit proving Justin Bieber is a pop music force rather than for its conceptual rhetoric.