For many American schoolchildren, Harriet Tubman is one of their first heroes. Unlike nearly all the other famous Americans they are given to read about, excepting perhaps Frederick Douglass, Tubman was enslaved. The story of this short, fiery woman is almost impossibly cinematic, from her daring escape from a plantation to her numerous missions back to free dozens of other slaves, and her later career as a Union spy. Not only that, like many major figures in the anti-slavery movement, she was intensely religious and given to visions.

It is hard to imagine a more perfect candidate for a heroic, against-all-odds biopic. But given the culture’s habitual blindness to heroism not in white male form, it still took over a century after Tubman’s death in 1913 for a project like Kasi Lemmons’ Harriet to come to theaters. The result is far from perfect, but ultimately saved by the transcendent performance from its lead.

Harriet starts in 1849 on the Maryland plantation where Harriet (Cynthia Erivo) and part of her family is enslaved. Learning the owner is reneging on a promise to free some of them, Harriet runs for it. Running from one safe house to the next, staggering through the woods and leaping into a raging river to escape her pursuers, she makes it over 100 miles to safety in Philadelphia. There she is taken in by the free black community, including real-life abolitionist pamphleteer William Still (Leslie Odom, Jr.) and fictional boarding-house owner Marie Buchanon (Janelle Monae).

But even though she finds safety and work as a maid—another escaped slave tries to calm her at one point, “they’re not paying us by the bushel”—Harriet is uneasy with her family, still behind enemy lines. Between that and the visions of terror and escape which send her into trance-like spells that she believes are messages from God, Harriet knows what she has to do. 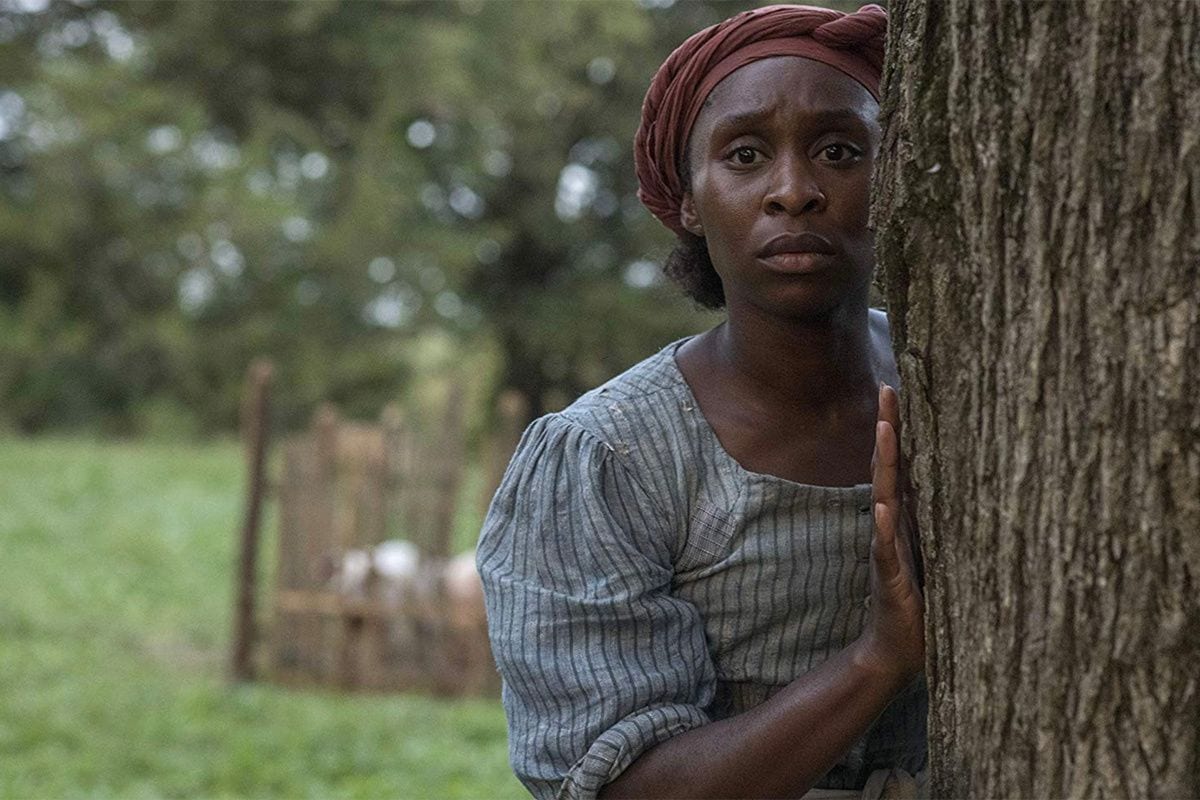 There is a bold and straightforward arc to Harriet that can make for goosebump excitement when all the elements come together. Just as Lemmons wastes no time in muscling her story along, Harriet swiftly refashions herself from maid to pistol-packing clandestine “slave-stealer” and Underground Railroad “conductor”. She easily orders around men twice her size and they meekly follow along. Time and again, Harriet darts south of the Mason-Dixon line and leads her people out, signaling by song, dodging the hunters looking for the legendary “Moses” (whom they assume is a man), and trusting in the divine directions delivered through her spells to show the way.

The movie misses almost every chance to show the impressive level of tradecraft the real Harriet had to use to escape detection. Instead, her success appears to be a question of will and divine messaging (numerous scenes almost vibrate with Biblical resonance). A number of action-movie-style showdowns are then bolted on. These become increasingly absurd, particularly those involving the Harriet’s former owners, whose self-pity over failing finances grows in tandem with the brutality they exercise to claw back their fading power. While the screenplay does not expend much time on the workings of the plantation, the fanatic devotion to Harriet’s recapture shown by Gideon (Joe Alwyn), a Slytherin-sinister blonde, shivers with the threat of the institutionalized sexual violence that pervaded the system.

An added wrinkle to the chase narrative that is initially interesting but does not ultimately lead to much is the presence of a pair of free black slave hunters, one of whom (Henry Hunter Hall, carrying himself with the sideways rakiness of a young Larenz Tate) is eventually won over by Harriet’s seemingly God-protected status. While the filmmakers’ appreciation for Harriet’s prophetic religiosity is true to the historical character, giving it credit for so much of her success threatens to ultimately diminish the unique nature of her accomplishments. 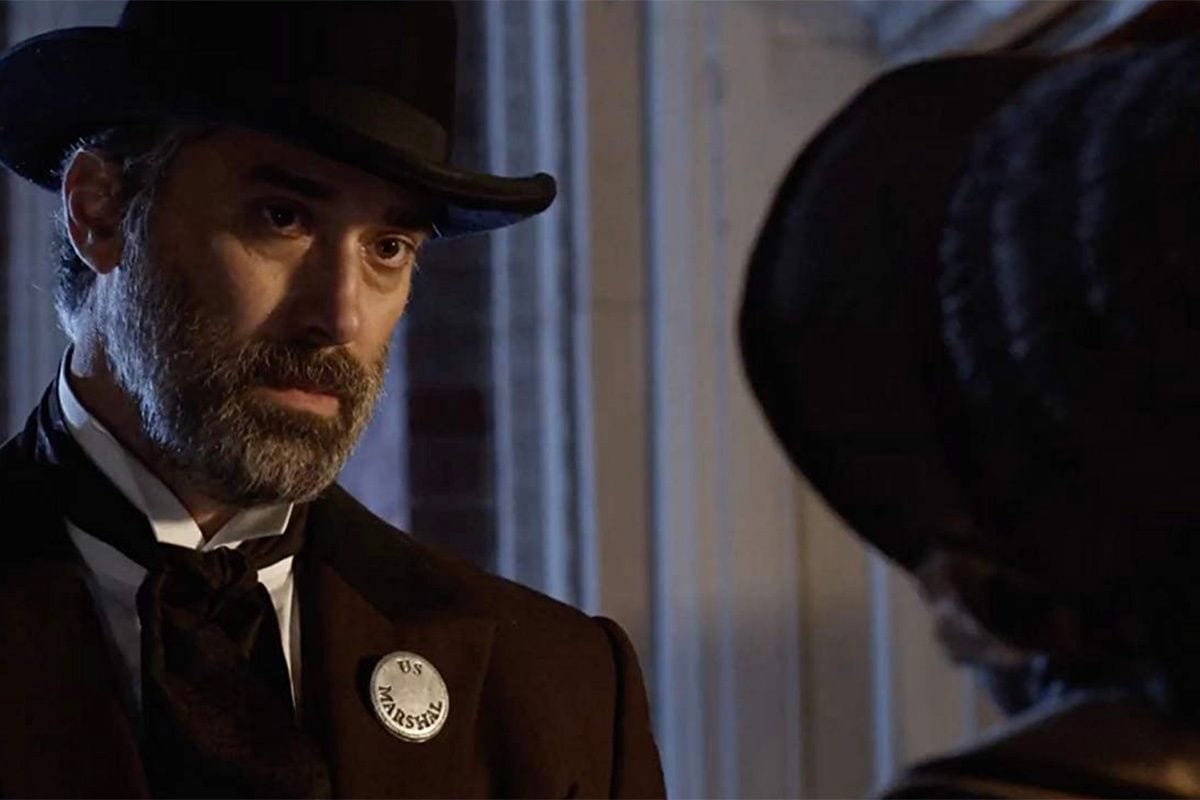 Unlike many narratives about the South’s cotton-farming gulags, there is little interest here for the insertion of sympathetic white allies or less villainous slave owners with conflicted emotions. At one point, when Harriet is facing down a rabble of bounty hunters legalized by the Fugitive Slave Act to kidnap free blacks from the North, there is a brief glimpse of the period’s most famous white abolitionist, John Brown (Nigel Reed), holding forth. But the camera barely leaves Harriet’s face. Men of both races are generally only supporting players as well. When invited to an abolitionist meeting, rather than meekly express her thanks, Harriet dresses down everybody from Frederick Douglass (Tory Kittles) to Senator William Seward (William L. Thomas) for their self-congratulation and lack of urgency.

Although Lemmons has crafted a handsomely shot and classically framed historical biopic, many of these moments work simply because of Erivo. She embodies a quiet, astoundingly propulsive stoicism that vaults the movie past the screenplay’s many flat moments. As she showed in Steve McQueen’s Widows (2018), Erivo has a way of simply staring down danger with a kind of courage that is more matter-of-fact than arrogant. There is a subtle grace to her power that enriches every scene she is in, from that slowly dawning joy when she first spots the North across a sunset-dappled hillside to the here-we-go-again look on her face when she commands a unit of Union soldiers to raise their rifles at the approach of Confederates chasing fleeing slaves.

It is a glorious performance. Erivo will most likely not win or even be nominated for an Oscar this year, even though it is hard to imagine any other actress surpassing what she has done here. But she and Lemmons have done justice to an American hero with a movie that, while creatively imperfect, is no small accomplishment in a system used to ignoring women like Harriet and what they have achieved in spite of everything against them.