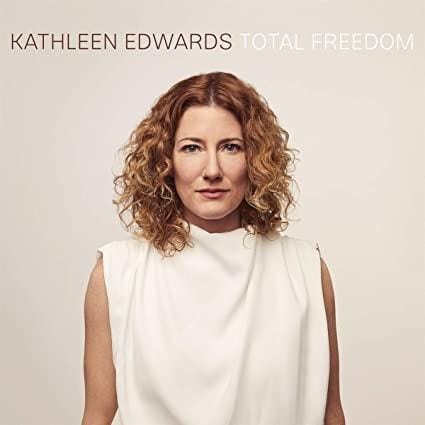 There’s a strange beauty to Canadian singer-songwriter Kathleen Edwards‘ latest album, Total Freedom. She wistfully looks back at the people she’s known and loved, the places she’s lived and grown, and things she did and didn’t do. Edwards is hard-headedly nostalgic about it all. Time has taught her lessons. She knows that even the bad experiences had their golden moments and that happiness is always ephemeral. There may be no god, no afterlife, no reason for existence, but so what? We can enjoy the present moment, reminisce and reflect, and enjoy pleasures when and where we can.

For those unfamiliar with her backstory, Edwards had a thriving musical career in the earlier part of the 21st century. She put out four studio albums between 2003 and 2012, the last one (Voyageur) cracking the Top 40 on the U.S. Billboard charts. Touring took a toll on Edwards’s mental and physical health, and in 2014 she quit the music business and opened a coffee shop (called Quitters) near her hometown of Ottawa. Edwards has called this period her “working sabbatical”. She said she never intended to stop music-making forever but just needed a break. She didn’t know it would take five years.

Total Freedom shows the positive benefit of Edwards taking time off. The songs are lyrically delightful and melodically charming. It’s unclear how autobiographical the lyrics sung in the first person are, and it really doesn’t matter. These are songs about friends and lovers, good times and bad relationships, the freshness of youth and getting older, to which almost everybody can relate. Edwards’ delightfully delivers her insights, even the unpleasant ones. When she berates a former paramour on “Hard on Everyone” or declares “I don’t love you anymore” on “Feelings Fade” or denigrates the creep who spent her money and took her on a “Fool’s Ride”, the songs show she has gotten over it. Moving on is the best revenge.

Most of the time, Edwards sketches out scenarios to make them real with just a few vague details: the smell of a shirt, a pull in a sweater, the name of a tire store. That allows her to use them as symbols that suggest emotions rather than concrete objects. Her stories become poetic when she gives specifics, as in “Simple Math”, her lovely ode to friendship: “Safety pins to taper our jeans raising hell in the backseat building forts in cedar trees ice cream banana seats running wild in out bare feet.” These memories are delivered in one breath here with odd pauses, so they are written here without line breaks or commas in the way recollections occur in our brains. The feelings are more important than the facts.

There’s a lonely philosophy embedded in the more seemingly gentle tone of the record. Having one’s “Options Open” and the total freedom promised in the album’s title means that a person does not need anyone else nor is needed by others. While Edwards celebrates her autonomy, she simultaneously mourns her lack of connections. On “Ashes to Ashes”, she notes there is no god and offers a materialistic view of the world. She may celebrate friendship, but that entity may just as well be a dead dog, as she sings on “Who Rescued Who”. As Kris Kristofferson and Janis Joplin sang so many years ago, freedom—even total freedom—isn’t all it’s cracked up to be. But sometimes it’s enough.