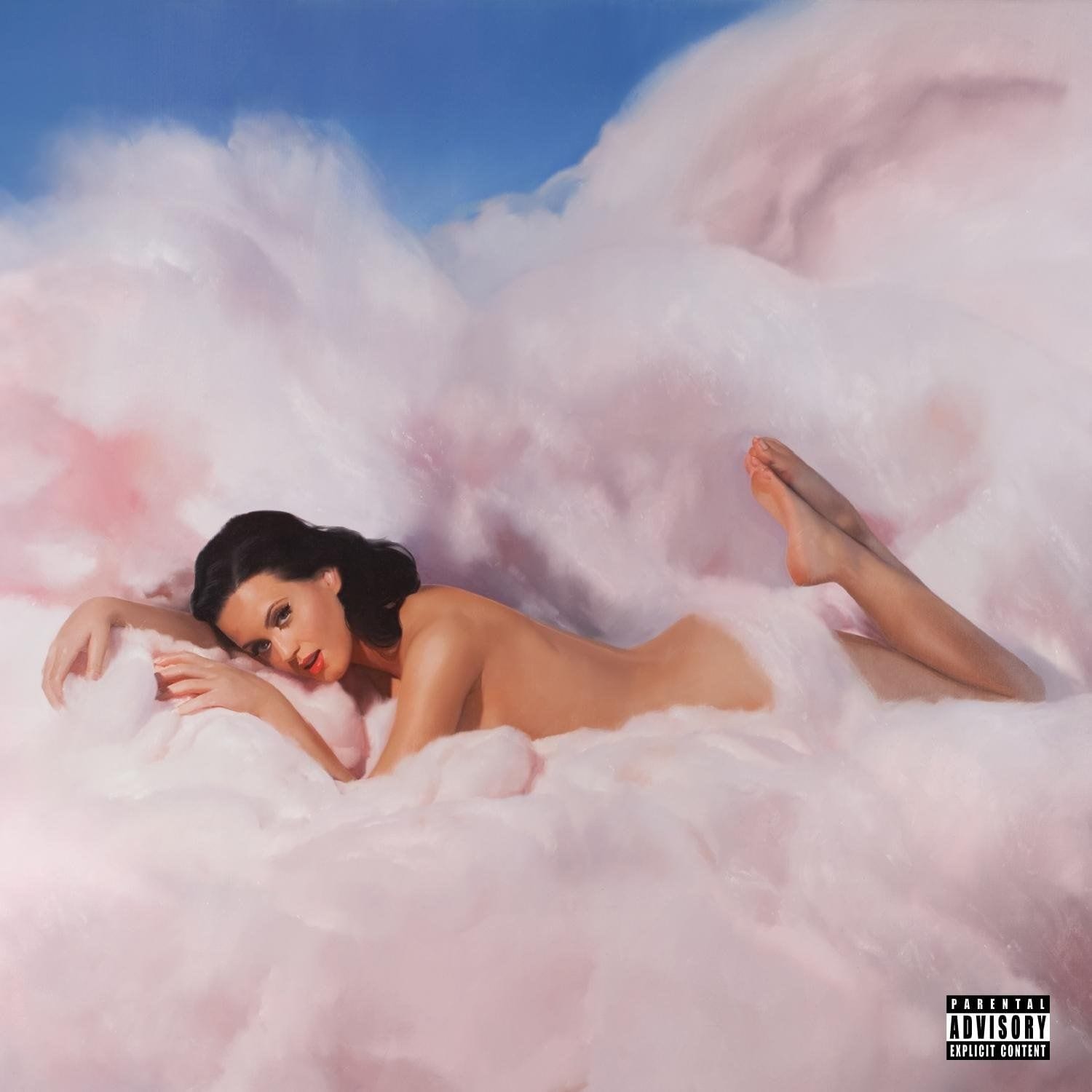 Like it or not, three things are certain: we are born, we will die, and Katy Perry‘s Teenage Dream is a perfect album. These are the inarguable facts of life, though they may be difficult to accept. This fundamental truth came into my mind’s eye (as it will for you one day if it hasn’t already) after a party I threw in my freshman-year dorm room, where I played nothing except for “Last Friday Night (T.G.I.F.)” on an infinite loop.

Like “Hollaback Girl“, “Milkshake“, or “Toxic“, it’s one of those songs that’s impossible to imagine being written—too intergalactically perfect to have entered the world through anything other than divine conception—fully mixed, and mastered. It’s easier to imagine it simply appearing onto a hard drive in all its glory. It’s perfect pop: equal parts genius and stupid, well within the vocal range of everyone on Earth, and catchy enough to land you in a padded room. But there’s something bizarre about “Last Friday Night”, too, that pushes it into the upper echelon of songs that will be sending rollerskating rinks into a frenzy for generations to come.

Maybe it’s the line about Katy Perry having been an international star for several years, not knowing what to “tell her boss” about the night in question. Maybe it’s the total sacrifice of the rhyme scheme to include the term “ménage à trois” in the chorus. Or maybe it’s the lyric to end all lyrics (which had already spoiled and curdled a million times over well before the first set of ears ever heard it), delivered so casually you’d think she was rhyming crazy with baby. “Think I need a ginger ale / That was such an epic fail.”

I’m probably thinking about it too hard, but after two Four Lokos and a couple of hundred back-to-back replays, the song feels almost sad to me. For instance, the contorted, synthetic sax solo before its final moments start to sound more like M83’s “Midnight City” than anything from Kidz Bop; its promise/threat to “do it aaaallllll again” sounds more psychotic than joyful.

All of this is to say: I realize that, like Walt Whitman, Katy Perry contains multitudes, and although the multitudes displayed on her magnum opus Teenage Dream include “bad” and “gross”, they culminate in a profoundly underappreciated and truly bizarre body of work. The LP is remembered for the #1 hits that honored California beach babes melting your popsicle (“California Gurls”), truly grotesque alien probing metaphors (“E.T.”), and feeling like a plastic bag (“Firework”). However, less often discussed is the fact that critics of the work as a whole once labeled it “contradictory”—even “unfair”—to the men in her life as a result of a surprisingly dark approach to album construction.

For weeks following the release of “California Gurls” in May of 2010, Katy Perry’s every move dominated the iTunes charts. (Yes, this was that long ago.) Pivoting from the alt-lite pinup girl aesthetic of 2008’s One of the Boys, Perry became an extremely stylish shapeshifter: neon-wigged Daphne from Scooby-Doo cosplay for the “Teenage Dream” single art; chic and bohemian for “The One That Got Away”; and stark and Matrix-like for “E.T.” It was the sort of clean, pitch-perfect album rollout that eludes Stan Twitter (now plagued by leaks and shoddy promotional gimmicks) to this day. The hype around the album’s release was immeasurable as each single skyrocketed to being played incessantly on pop radio, complete with lyrics captioning every Picnik’d Facebook selfie the world over.

Because of the stratospheric success of the rockish “I Kissed a Girl” and “Hot N Cold”, it’s easy to forget that the music of Teenage Dream itself was not dissimilar to Taylor Swift’s transition from Red to 1989. The album was an assertion that Katy Perry was a force to be reckoned with beyond any genre within which she might’ve been pigeonholed. It also shares some DNA with Britney Spears’ iconic Blackout in its every-song-is-a-potential-single approach. There is no room for any shreds of doubt, as every moment is airtight, immediate, and unabashedly corny and rapturous.

Teenage Dream succeeds through an obsession with the fine details of its sticky hooks. For example, the breathless “You! Make! Me!” on “Teenage Dream”; the honk of the Jeep being “freaked” in on “California Gurls”; and Perry’s impassioned voice totally daring you to raise an eyebrow at the plastic bag metaphor on “Firework”. The result is an album front-loaded with unforgettable pop hits, which, of course, positioned it to completely destroy some of the most difficult pop music records to break. Specifically, it’s the first album by a woman to house five number one singles (nearly six, which would’ve broken Michael Jackson’s overall record for Bad), going on to sell a stunning six million copies as of 2013. God knows we haven’t stopped hearing its hits since then.

Less discussed is that these instant classics worked to bury the lead for the deadly serious things Perry needed to get off her whipped-cream-spewing chest during a time of her career where her carefree, winking image meant everything to her continued success. Teenage Dream‘s deeper cuts are surprisingly raw and confessional without sacrificing the trademark sass and frankness of the album as a whole. There’s a lingering desire from One of the Boys to tell ex-lovers to piss off in ways that are meant to cut deep, even at the risk of humiliation. (See why I argue that “Ur So Gay” is the greatest song in her discography). However, there’s also a sense of a very adult wake-up call, the kind of personal growth that Katy was incapable of expressing on the so-called “purposeful” Witness seven years later.

Most indicative is “Circle the Drain“, a driving, raucous song that ruthlessly drags pseudo-famous ex Travie McCoy of Gym Class Heroes (via one of the catchiest and most memorable vocal performances of Perry’s career). It’s a song about reckless drug and alcohol use, the hopeless desire to stay and “fix” somebody that you can see fading away, accepting mistreatment out of blind love, and the anger and heartbreak of realizing that someone isn’t willing to help themselves.

Slant Magazine’s Matthew Cole wrote that in the context of the rest of Teenage Dream, Perry comes off as a hypocrite on “Circle the Drain”. “She’s offended that he takes drugs before foreplay, but wasn’t she the one blacking out and hooking up ‘Last Friday Night’?” This line of criticism—which is a criticism of Perry as a human being, not an artist—was extremely common in critical reviews of Teenage Dream upon release. Because Teenage Dream spans a period in Perry’s life in which she was having messy (better known to people with friends as fun) nights out and getting sand in her stilettos, the (notably male) critical logic concluded that it could not also include times of deep devotion, bitter resentment, and full-bodied love.

On “Circle the Drain”, Katy Perry is not some jilted groupie who wishes that big shot Travie McCoy would have sober sex with her; instead, she’s finally reacting after repeatedly being humiliated by someone she clearly cares for. She refers to her ex-lover as someone who “should’ve been [her] teammate”, who tells her that he loves her but then forgets when he emerges from a drug-addled state. McCoy himself responded to the track after the album’s release with Cole’s exact criticism: “I heard she put out a song that’s about me, or about some old habits or whatever. [And] I look at it like this: I’m just stoked that she finally has a song with some substance on her record. Good job”.

What’s so unreasonable about Perry being able to empathically and joyously sing a song like “Peacock”, yet also being capable of experiencing intense, “serious” emotions like those on display on “Circle the Drain”? I, for one, don’t believe we live in a world where one can’t feel slighted by someone they love one day and then turn around and say, “Show me your dick” the next.

Truly, I think it’s important to talk about “Peacock“. It wasn’t a runaway hit like its uptempo sisters, but it inspires the sort of “What the fuck?” reaction that’s sorely missing from the pop landscape today. I don’t think it’s too bold to say that no pop singer in 2020 operating at Katy’s 2010 caliber could pull off “Peacock”, which is so unflinchingly bonkers that it’s almost difficult to listen to. From the cheerleader chant of “Cock! Cock! Cock!” in the first five seconds, to the various descriptors of the dick in question (“magical”, “colorful”, “fascinating”, “beautiful”), to the bridge in which the dick is revealed (“I just shed a tear / I am so unprepared”), I can’t help but wonder who else in the game is, or was, operating at this level of pure comedy without any consideration for judgment. Many still see “Peacock” as irritating; I see it as brave.

Of similar bravery is closer “Not Like the Movies”. It’s a raw and self-aware ballad that doubles as a jubilant celebration of her marriage to Russell Brand and, subsequently, a lament of its false promise as it very publicly fell apart. Her vocals on the song are uncharacteristically hushed and tender, and the song plays with moments of quiet in ways that are equally rare in her discography. The song opens with a vignette of a fumbling marriage proposal: he tries to put the ring on, and the ring sort of fits, but not like a glove, not in a way that sends fireworks through the sky.

Perry freaks out, wondering if she’s a “stupid girl” for getting a bad feeling in her gut from something so insignificant and fixable. (The way she emphasizes “stupid girl“ here is crucial: early-career Perry was uncommonly incisive in her critiques of female expectations, as well as straight men’s inability to, well, be men.) The remainder of a song is a lament of the mundane ways in which silver-screen love stories tend to play out in real life (God, it really should make the stars burn brighter; time really should stop when you’re together; wouldn’t it be nice to live in the happy ending?). By the time the song was featured in the Part of Me concert film, she’d already learned the other meaning of her message: there can be value in trusting that “stupid” gut instinct.

What’s so fascinating about Teenage Dream actually isn’t its impact on contemporary female pop in the years to follow—although that is immeasurable—but rather its odd singularity. Teenage Dream is snappy, bubbly, and self-aware to a fault in its moments of levity; every sexual innuendo and dorky lyric is delivered with a massive Looney Tunes wink. And yet, it’s also a convicted, pensive coming-of-age statement, like when Perry “prays for favor like Esther” on “Who Am I Living For”, which details her decision to pursue her career despite her devoutly religious upbringing.

The inclusion of songs like these among songs like “Peacock” is not by accident, but central to the Katy Perry ethos of being a girl who is in on the joke of being a girl. In 2020, we are barely catching up to her—there is no pop star working at her level today who’s planning to die on the hill that is Teenage Dream, where being sexy, or girly, or goofy doesn’t equal stupid, vapid, or lacking a rich inner life. In this way, it is an album that proves that it takes a great deal of conviction to pursue instincts that are of less “substance”.

Teenage Dream is the sound of the cotton candy road less traveled. The choice to walk it is hard-fought, and many will doubt your decision to wear giant gummy bears on your boobs, but by the time you reach its end, only one voice will really matter: “Greetings, loved ones / Let’s take a journey.”