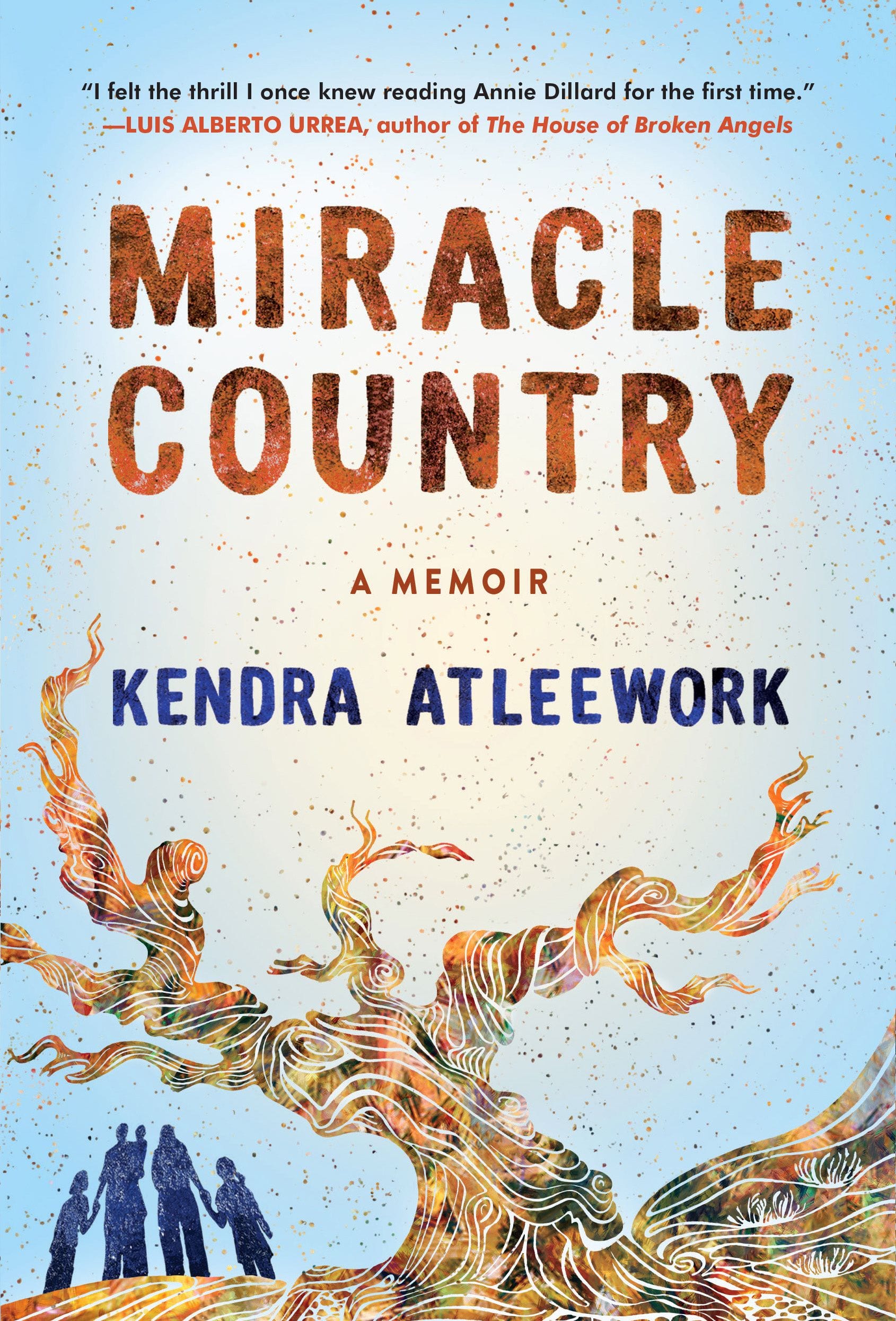 Miracle Country: A Memoir is Kendra Atleework‘s exploration into the power of home. Atleework remembers her family’s roots and explores the history of California’s arid Eastern Sierras in her debut. Drawing parallels between her upbringing and the region’s history, the memoir celebrates her home and the region while lovingly portraying her family’s eccentricities. Her ability to relay naturalistic majesty in exquisite detail is dynamic yet tender, resulting in captivating storytelling.

Miracle Country is as much an environmental history as it is a memoir. Atleework grew-up in Swall Meadows, in the Owens Valley of the Eastern Sierra Nevada. The landscape is barren and extreme, the seasons’ changes bring the equal threat of harsh winds, massive fires, or heavy snows. Recalling Wallace Stegner‘s famous gripe to get over the color green as the marker of a beautiful landscape, Atleework realizes she was raised without much need for a lush flora.

For example, Atleework’s opening chapter depicts a severe fire. It destroys homes and material items, yet Atleework reminds us that the corresponding memories remain untouched. Her upbringing is marked by stories of acquaintances’ deaths caused by the environment or even her parents’ “flight plan” — an agreed-upon action plan should one person’s return home be exceedingly delayed. For Atleework and her kin, the environmental severity is imbued with respect, in a way recalling Robin Wall Kimmerer’s Braiding Sweetgrass: Indigenous Wisdom, Scientific Knowledge and the Teaching of Plants. Much like Wall Kimmerer proposes, Atleework endows her home space with warmth and reverence. She thereby uses Miracle Country to enact reciprocity with the natural wonders.

Part of Atleework’s affinity for Swall Meadows results from her parents’ love of the area and their devotion to their family. Her parents taught their children to thrive in the beautiful yet dangerous region, oftentimes using their own challenges to convey poignant advice. In a telling lesson, her father teaches Atleework to always maintain three points of contact with the ground to prevent falls and ens

Atleework doesn’t engolden her family’s history. When she was 16, her mother passed away from a rare autoimmune disease. Despite her father’s earnest attempts to hold them together, the family struggles; her sister parties to dangerous extremes and her brother begins contending with the violence that plagues him through adulthood. For Atleework herself, the desert becomes hostile and isolating. She leaves for Los Angeles and then to Minnesota, but frequently feels the pull to return home.

The memories of her family seem disconnected and the writing is flat compared with Atleework’s ability to pen a natural history. Her parents’ narrative is well-developed, but her brother is merely a footnote while her sister’s influence is a blip. Whereas her environmental writing has vivacity, the depictions of Atleework’s family render them as mundane.

Miracle Country doesn’t only deliver Atleework’s story, she also threads in the histories of others who are also impassioned with the area. She calls upon the writing of Mary Hunter Austin, a late-19th-century Owens Valley essayist who used the desert to cultivate her independence and ambition. This was especially necessary for Austin’s identity as she was questioned and scrutinized by dominant society for her subversion of gender norms. Atleework uses Austin as a framework to center her own attachment to the environment. The opportunity to relate to Austin at a sociocultural level is purposely minimized so Atleework can emphasize their bond to the Owens Valley.

Atleework allies with Austin’s criticism of the pipeline — the system redirecting the desert’s water towards Los Angeles. Throughout the memoir, Atleework turns to the life of civil engineer William Mulholland to situate the politicization of water and the siphoning of other natural resources. Atleework problematizes Mulholland’s history and the enduring tension between the rural and urban spaces. At one point she and her friend intentionally urinated in the river as a way of affirming their disdain for Los Angeles’ over-consumption. Later, Atleework visits Mulholland’s mausoleum in an attempt to understand the historical figure for his contributions and faults.

Austin and Mulholland are not the only cultural figure Atleework summons. She briefly mentions the one-armed geologist John Wesley Powell and environmentalist Marc Reisner, who both found the desert’s prowess inspirational and the land pillaging deplorable. She carefully avoids an androcentric lens by incorporating the voices of Joan Didion and Ellen Meloy. She relies on Paiute centenarian, Hoavadunuki (aka, Jack Stewart), to share his story of white settlers’ desecration of the land in the 1920s.

Whereas Austin’s voice is the most developed, the sheer quantity of other perspectives muddies her account. This is evident when she delivers her father’s history and calls on a myriad of philosophers to substantiate her father’s perspective on religion. The connection to Neitzche and Edmund Burke is apparent, but their ideologies serve as a fill-in for Atleework’s voice. Here the narrative is overburdened and the author’s memoir is no longer her own.

Although inconsistent as a memoir, Miracle Country is a breathtaking environmental history. Atleework is a shrewd observer and her writing is a gratifying contribution to the desert-literature genre.