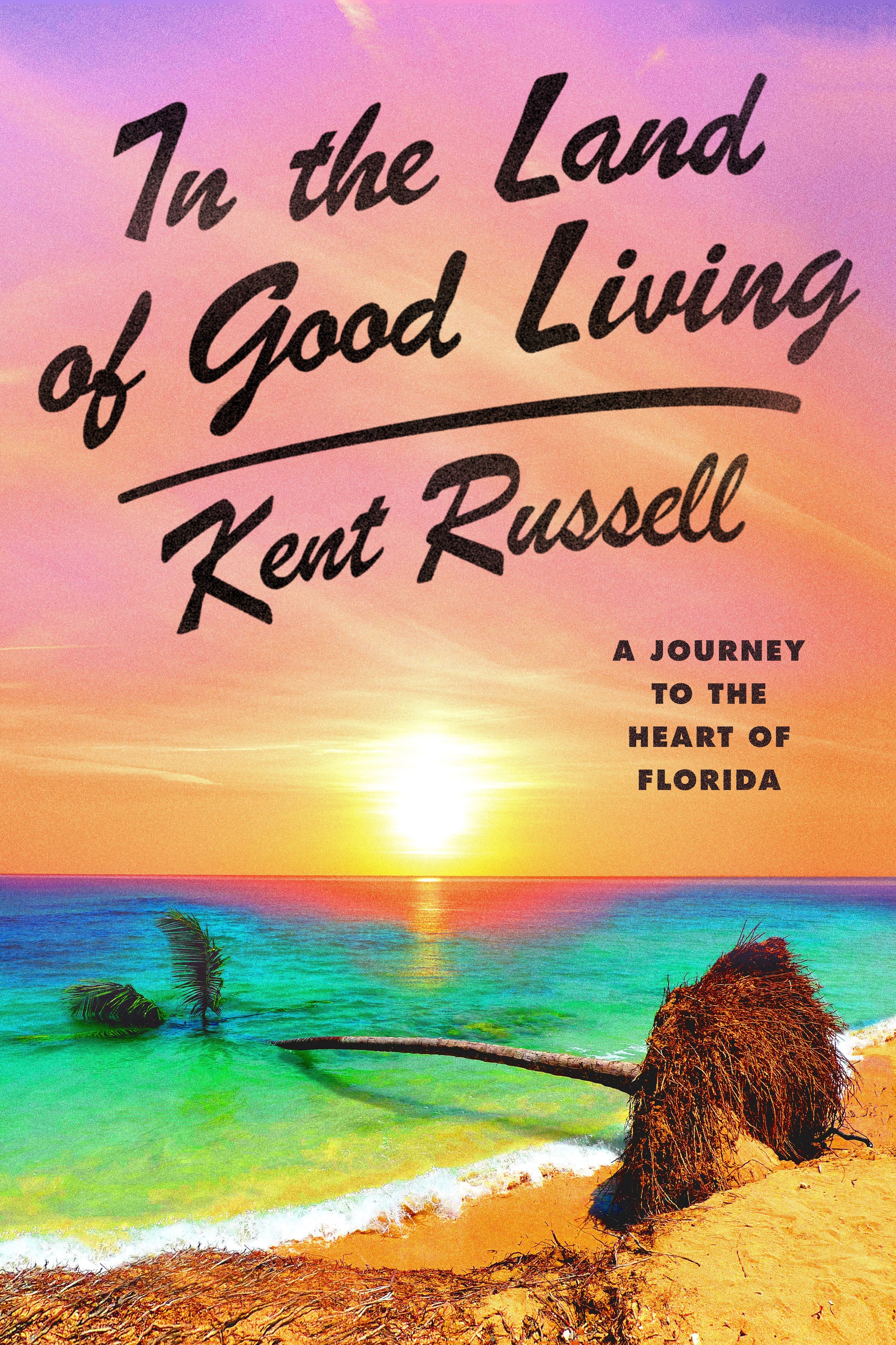 In the Land of Good Living: A Journey to the Heart of Florida
Kent Russell
Knopf

In his off-kilter adventure story/cultural history In the Land of Good Living, Kent Russell says he doesn’t want to pander to those who filter their ideas of the Sunshine State through the absurdist lens of Florida Man memes. Yet he seldom seems to be more generous in his portrayal of his fellow Floridians.

There is a growing body of Floridania fiction that includes complex, often damaged characters who strive to rise above the cruel and unpredictable nature of the southernmost state. Among those titles are Kristen Arnett’s Mostly Dead Things (2019), Lauren Groff‘s Florida, and Swamplandia!, written by Karen Russell, Kent’s older sister. Russell himself may be the complex, damaged character who is central to his story. He is at once narrator, documentarian, and for the reader, tour guide.

The book opens with what appears to be an excerpt from a screenplay but in fact is a snippet from the forthcoming documentary that is purportedly the result of the filmmaking adventure chronicled through In the Land of Good Living. The primary cast is Florida-expat Kent, now teaching creative writing as an adjunct instructor in New York City; his former college neighbor and now unemployed buddy Noah; and Glenn, his writing program classmate turned documentary filmmaker. In a bit of drunken revelry, the trio decides it is their destiny to tell the gonzo story of Florida, on film.

The concept for the trip drew inspiration from Lawton Chiles, the last Democratic governor of the State of Florida. When Chiles decided to run for the U.S. Senate in 1970, he also decided to embark on a 1,003-mile walk from Pensacola to Key West to learn more about the state and to garner much-needed media attention. This arduous adventure took 91 days.

Kent, Noah, and Glenn set out on a similar trip, also on foot. They aspire to define the undefinable state, hoping to articulate the complex mystery of Florida. Their trip begins at the state line shortly before the 2016 presidential election, and learning about the influence of and interest in Donald Trump among Floridians is one of the important pieces of public history covered by In the Land of Good Living. From “Fortress Florida”– the region of the panhandle that is home to Tyndall Air Force Base and the half million acres that comprise Eglin Air Force Base — to the suburbs around Orlando and beyond, Russell works to understand Trump supporters while also understanding the ethos of Floridians themselves.

Russell’s writing is unfailingly descriptive and engaging when portraying scenes from Florida history. These scenes range from political intrigue and the founding of communities to the cultural transformation that came about through the introduction of air conditioning. He writes that Floridians were once attuned to the environment, planting shade trees, designing homes with windows and fans to make the most of a cooling breeze, and thoughtfully organizing their day in response to the heat and rain.

Central air conditioning not only rendered all of those provisions unnecessary, it also created a chilling 60 degree interior for homes, offices, restaurants, and shopping malls. He convincingly argues that Floridian’s sense of place and slow pace of life were left behind along with the open windows and ceiling fans.

As Russell and his companions walk through the forests, on the beaches, and along the highways, a buddy movie narrative develops that is a counterbalance to the more serious questions about social realities discovered along the way. They get drunk. Guns are raised against them by some, while others pray for them.

Indeed, the whole array of All Things Florida is in the mix. They weather a hurricane, get into an argument in Gainesville, almost get into trouble joining up with a raucous bachelor party group in Daytona, then head on to Cassadaga, one of the lesser-known centers of Florida Weird. Here Russell tells the story of Henry Flagler buying up and expanding the railroads, and how theSpiritualist Center in Cassadaga was one of the sites that was built and developed as tourists began to visit the state. After recounting their filming at Cassadaga, Russell takes up the history of Spiritualists-as-confidence-men, a tradition that, based on their visit, continues to the present day.

Stories about road trips, whether by car, by Greyhound bus, or on foot, are typically stories of self-discovery. We can better understand ourselves when we understand the places that made us who we are. When the trio arrives in Russell’s hometown of Miami, he reflects on how, rather than having newcomers adapt to the city, Miami adapts to fit them.

There is no singular Miami, much as there is no singular way to define community or the United States in some sweeping manner. If Florida is indeed the land of good living, then its goodness is particular and individual. Russell’s narrative, with film scenes and dialog spliced in, is an engaging adventure of the strangeness of both Florida and its people.