Outside of that album’s centerpiece, “Praying”, and a handful of mostly vague self-discovery slow burners, Rainbow was above all a reclamation of Kesha’s power to create fun in a way that was uniquely her own. The yodeling, screaming hoedown “Boots”, the bratty sneer of “Let Em Talk”, the anthemic (if trite) howls on “Woman”. Each demonstrated Kesha truly in the driver’s seat, allowed to lean into her quirks that were incompatible with her work with Luke. Rainbow didn’t reinvent Kesha as a profound, world-weary crooner, nor did it condition her fans to consider her so. She has never been dark, and that essential lightness is what has kept her work so hotly anticipated despite being rather formulaic and predictable.

And yet, the promise of a Return to Fun was made, which wouldn’t necessarily be an indictment of High Road if it wasn’t also stuffed to the brim with some of the most confounding, contradictory aesthetic choices on a pop record in recent memory. High Road is an overdetermined struggle to shed the burden of Ke$ha, who once dedicated an entire song to trashing a rich dude’s house with her piss and vomit. The album tries to find something — anything — interesting about no-dollar-sign Kesha, whose far weaker flask-toting flower child persona seems more exhausted than enlightened.

It’s frankly depressing to watch the woman with the third best selling digital single of all time go through so many obligatory motions. In an attempt to cash in on the current wave of country-tinged pop, lead single “Raising Hell” is the sound of a literal prayer for a hit. It parrots the Kesha-involved smashes of recent years (specifically “Timber” and “Good Old Days”), sounding like a song you might hear in line for a 2000’s throwback night that definitely won’t be worth the cover charge. Big Freedia, whose contributions have livened up some of the most danceable hits of the last decade, sounds acutely micromanaged here, permitted to ask that we “shake it”, but certainly not in the way that might make you pop a Tylenol in the club.

The sonic aesthetic at the center of “Raising Hell” crops up frequently on High Road, its country and gospel influences cropping up at completely unexpected and often uncalled for times. “Birthday Suit”, an otherwise innocuous will-they-won’t-they banger pumps the brakes on any flirty energy it builds by abruptly shifting into a folksy, knee-slapping instrumental break reminiscent of the tonal whiplash in Poppy’s recent work, but without any of the irony. “My Own Dance” is hard to listen to, its weak call and response chorus about as fun as a youth pastor trying to rile up some sighing teens. The title track at least gets off the ground, its frantic energy anchored by familiar brat-raps and a bubbly choir section, though its constantly shifting energy makes it play like four disparate songs in one.

In general, the production on High Road is up to par for pop music in 2020 — effective at minimum, stuffed with ear-grabbing bells and whistles, and appropriately punchy and noisy for Kesha’s distinctive palette. High Road introduces a new trick to her repertoire too, which regularly works to the benefit of its strongest songs. “Honey”, an understated soul-tinged track about a man-stealing ex-friend, boasts a genuinely funny and joyful chattiness. Kesha herself — and a litany of background singers — interject mid-melody to get a few extra digs in, poking fun at the target a little more without sounding cruel. This loose, off-the-cuff delivery is endearing, and though “Honey” centers on a simple looping riff, it’s reminiscent of some of her best early work that benefitted from a similar casualness. Kesha’s willingness to be a little messy with her vocal arrangements make for the strongest moments on the album — the back and forth on “Cowboy Blues” and “BFF” especially.

Sadly, these fleeting moments are not indicative of what High Road is all about. Instead, it’s an often infuriating listen, so stubborn in its commitment to cheesy, hunky-dory sentiment that many of its otherwise promising tracks are completely tanked by lyrics that have no appropriate venue. High Road is an unrepentant endurance test of the listener’s cringe response. What’s worse is that the record’s worst lyrical moments are motivated by a paranoid, confused idea that Kesha’s audience hates her, or rather, that they want “the old Ke$ha”. Kesha makes a point to tell off these supposed naysayers, to promise again and again that she is going to be herself, haters be damned. But she exposes a great deal of mid-career anxiety, contradicting herself at every turn, testing her listeners’ patience in the process.

This lyrical preoccupation bears similar DNA to Miley Cyrus’s Dead Petz, which was helmed by one of Kesha’s frequent collaborators, Wayne Coyne. High Road busies itself with creating a strikingly similar “wild child” persona, to which Kesha is perhaps better suited than Cyrus ever was. But the hallmarks of that lifestyle as presented on High Road (being drunk at inappropriate times, adventurous sex broadly defined as “threesomes”, tripping in the desert, whatever else might stand in obvious contrast to the album’s bizarre southern Baptist references) seem ultimately uninspired.

But across every single high-BPM song on High Road, she does return to silly, pump-up white girl rap — all of it practically indiscernible from her verses on Warrior. She does return to soaring, radio-ready hooks, even if many of them are too overwrought to reach the heights of a gem like “Your Love Is My Drug”. Saccharine self-empowerment remains undoubtedly a huge priority for her. She goes as far as to bill “Ke$ha” as a featured artist on “Kinky”, but it’s impossible to tell which section is meant to throwback to something left behind. If this is “her own dance”, it’s hard to see what she’s fighting for the freedom to do. Certainly, nothing was stopping her from demanding that nobody “circumcise her circumstance” (no, actually) in 2011.

Those songs that fall outside of her usual sound are extreme tests of will, stuffed full of goofy sonic choices and borderline childish lyrics that shrink replay appeal to microscopic levels. “The Potato Song”, the title of which may be enough to keep the casual listener away, is a real head-scratcher. It’s built around heavily distorted vocals and a polka arrangement reminiscent of Lily Allen’s “Never Gonna Happen”, which was a risky tightrope act even in the gonzo pop landscape of 2009. The song is a profoundly Freudian rallying cry that’s impossible to take seriously. “I’m throwing away all my big girl panties… I’ll be out riding my pony until it’s time for candy, and I’ll be naked! Cuz I want to!”

“Little Bit of Love” explores more acceptable lyrical territory (“You only wanna kiss me when I give you sad eyes” stands as a genuinely evocative moment), but bogs itself down with glaringly obvious Panic! at the Disco influence, between the smarmy and annoying Vaudevillian piano verses and its unearned booming-by-numbers chorus. “BFF” is mostly pleasant with its warm and twinkling production, but you wouldn’t be blamed for flinching at lines like “I knew you were nervous, and I thought it’d make you laugh, so I sent you a bag of candy dicks.” 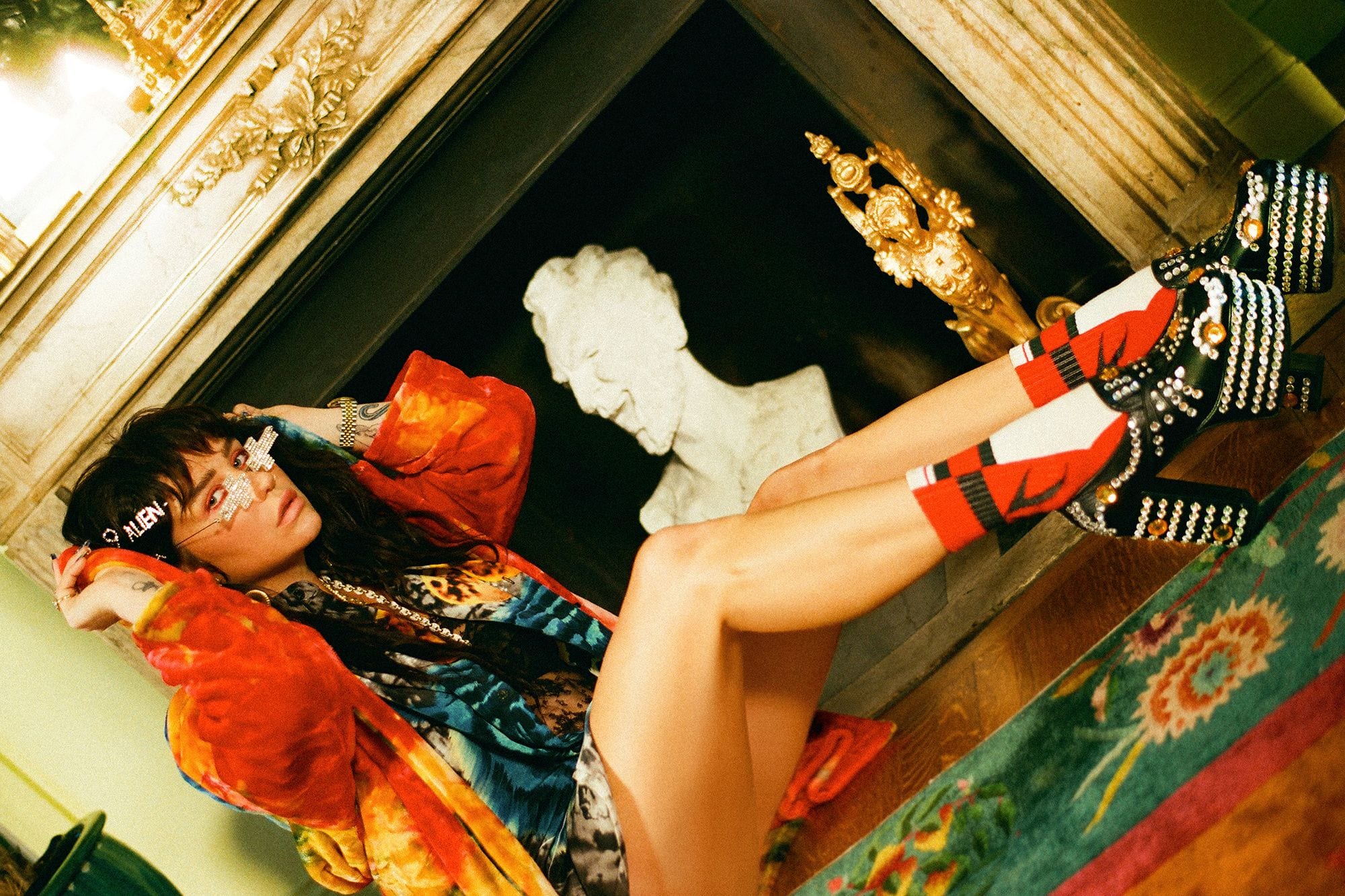 All of this is to say that, by and large, High Road’s sound and narrative feel anything but fun: flailing or frantic, sure, but not fun. Practically the entire runtime exists in service of righting the perceived wrongs of an early career that has actually aged into a great deal of respect. The caustic electro influence of Animal and Cannibal can be found in all corners of the hyper-pop landscape of 2020. What Kesha decides to reaffirm and commemorate on High Road are the worst parts of that musical legacy: one-size-fits-all empowerment platitudes, a penchant for the obnoxious, an artistic path that amounts mostly to a few steps sideways.

Let’s assume for a moment that High Road is a moment of deliverance for Kesha, the album that she always wanted to make. Even if it’s silly, or niche, or just hit-hungry enough to retain the present caliber of her career while catering almost entirely to her core fans who’d love pretty much anything she made, maybe that’s genuinely her mission. Fair enough. But if that’s the case, then why dedicate so much of that dream-realizing album to insisting that your dream has been realized, and targeting that insistence at supposed doubters and haters?

From the “I’m gonna love you even though you hate me” moment on “Shadows”, to the haters who think she’s “crazy” and “dumb” on “High Road”, who elsewhere in her discography wouldn’t have even been given the time of day, pressure is more omnipresent than it has ever been on a Kesha record. By the time “Father Daughter Dance” (which legitimately gives “Praying” a run for its money) gives way to “Chasing Thunder”, the forced party jams on High Road couldn’t sound less like empowerment, or more like self-medication.