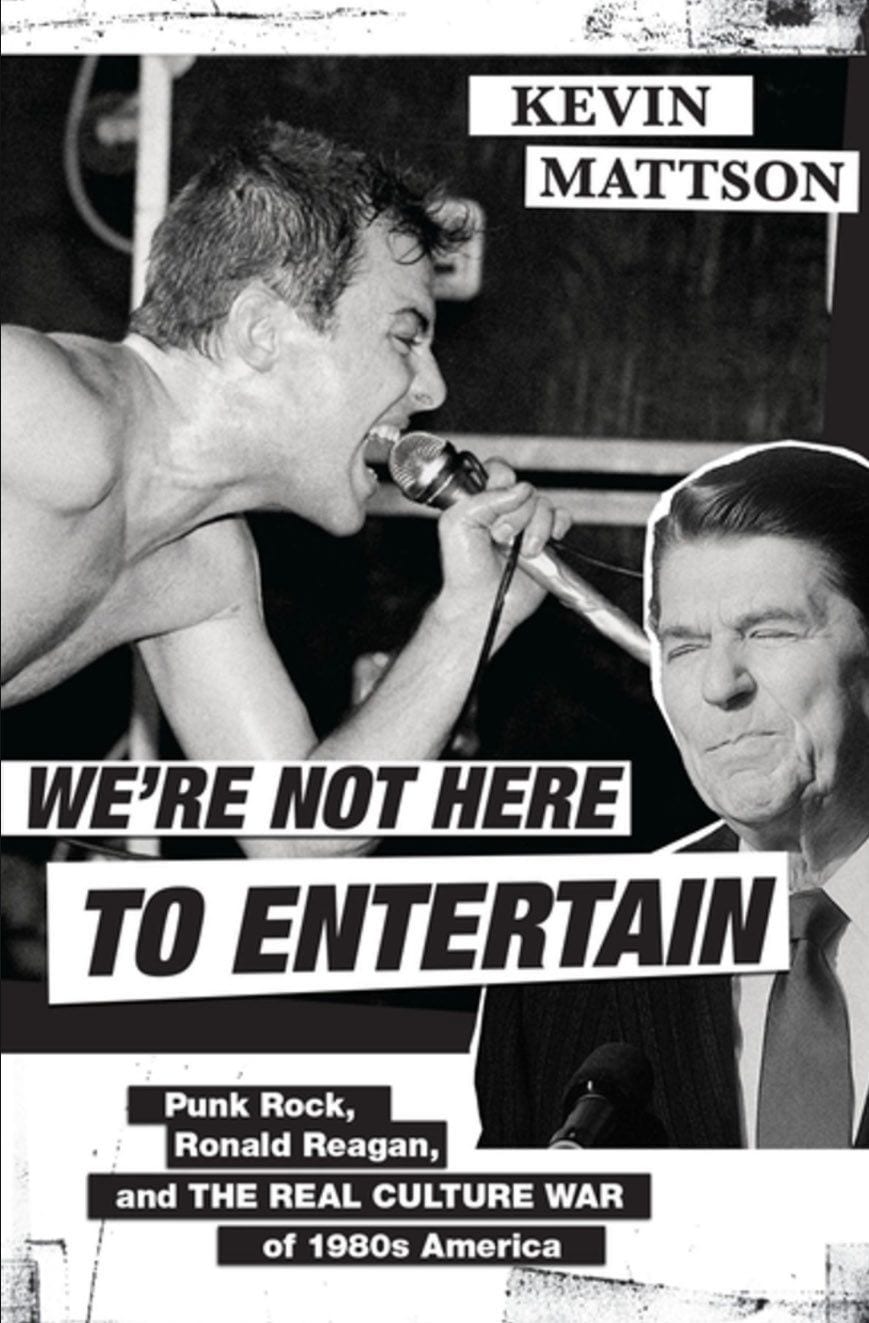 Most books about punk rock are maddening. This is because of the beautifully human paradox at the heart of punk itself: punk ideology becomes corrupted when punk praxis achieves any kind of modest success. This principle seems to hold across all the waves of punk we’ve seen so far. In the ’70s, the Sex Pistols eventually rocketed Vivienne Westwood to iconic fashion designer status. In the ’80s, Black Flag begat shlocky heavy metal in the shadow of MTV. In the ’90s, there’s wildly famous grunge messiah Kurt Cobain hiding out at home with his shotgun under his chin. In this century, we have the oxymoronic genre of “pop-punk”. And so it goes.

How does one write analytical or persuasive content about punks of the past under such narrow conditions? Largely by presenting this paradox but doing nothing to ameliorate its inevitable future return.

Nietzsche’s notion of eternal return is a thing that most well-read people with an interest in punk are thoroughly acquainted with, and yet so many books about punk offer a small slice of punk’s history as if that slice possesses unique challenges. Thus, even as I criticize Kevin Mattson for the fact that he can’t escape this problem in We’re Not Here to Entertain: Punk Rock, Ronald Reagan, and the Real Culture War of 1980s America, even as it irritates me that he very gently refers to this paradox as “punk’s promise and its overburdened challenge” (291), this is a book worth reading because it has so much direct relevance to American punks operating today.

If the ’80s included the dramatic rise of multinational corporations and the monopolistic corporatization of music, our present position of litigating and legislating corporate maneuvers as if those corporations were people reflects ye olde punk problems in a newfangled way. Reagan was frequently both lauded by his own side and derided by punk opposition forces as “entertainer-in-chief”. We surely need not wait for any grand retrospective on the current occupant of the White House to grasp how he faces similar judgment.

Mattson’s project is therefore timely. Or we can say that a punk project such as this is really for all time, since We’re Not Here to Entertain serves up the narrow slice of the first half of the ’80s in a way that will be perpetually relevant to any youngsters just now or just inevitably in the future getting their blood up about any ugly political or financial scene for the first time. Mattson is a history professor and he’s the author or editor of a dozen or so books about presidential politics that often focus in one way or another on the intersection of culture wars and youth music movements, so he knows his business well and this is his stab at explaining what went down from 1980 through 1985. This era is commonly known as the second wave of punk, usually characterized as having two flanks presided over by the Dead Kennedys and Black Flag.

Because he is a historian, Mattson gave in to the obvious temptation to order his analysis in a chronological manner. Based on his previous projects, Reagan is also the obvious choice to anchor this book. The author’s sympathies very clearly lie on the Dead Kennedys side of things rather than the colder and more militant Black Flag. In some ways, it might’ve been a more compelling read to use Jello Biafra, the lead singer of the Dead Kennedys, as the focal point.

Mattson often dives a little deeper into obscure band lore or pinpoints lyrics with strong political and ideological relevance to his discussion of Reagan. He draws on the work of many bands that were active during this half-decade slice, but clearly knows more about and agrees more often with Biafra’s points than with any other punk spokesperson presented in the book. In fact, Biafra is one of the few people offered up without any downside in We’re Not Here to Entertain—which is kind of odd, considering that since 1986 Biafra has been proven in many ways an awkward model for his ideas, first through repeatedly being held liable for breach of contract by not paying his bandmates a decade worth of royalties, and then later in 2000 through his failed bid for the presidency under the Green Party banner.

Beyond the generic issue of punk’s overall tendency to “fail by succeeding”, this myopia about Biafra is one example of a larger challenge with Mattson’s approach: that he stops his analysis at 1986 in nearly all cases, even when a dose of later history might go a long way toward shedding light on some of the events on which his analysis is focused. A smaller example of this failure would be his couple of pages on Bruce Springsteen‘s “Born in the U.S.A.” as a vehicle for a macho, working-class Reagan youth movement. Mattson gives one sentence to the reluctance of the Boss to be used by Reagan in this manner but had the author spent another few lines on how we view that album today or Springsteen’s decades of more or less shilling for Democrats would’ve been nice.

Another example would be Mattson’s take on Bret Easton Ellis, who gets celebrated for 1985’s Less Than Zero (despite going whole hog for corporate Hollywood’s synergy with Marek Kanievska’s film adaptation in 1987) while Jay McInerney —who is by nearly all accounts the more skilled writer of the two satirists—gets roasted for Bright Lights, Big City (1984) and James Bridges’ 1988 film adaptation. And any dip into the later work of Ellis reveals his supreme conservatism.

In some sense, my beefs with Mattson’s pretty terrific work stem from the fact that he is a historian who is considering examples requiring more background as a music, film, or literary critic. Perhaps the author hasn’t read anything by or about Ellis since 1986, but I doubt he has no knowledge of Biafra’s increasing lameness.

The other thing I’ll fault him on, perhaps more fairly, is the two cases where he savages an icon of ’80s culture in a manner that would be considered lopsided even if one stops time at 1986: Madonna and the NYC nightclub, Danceteria. Madonna is repeatedly referred to as a “pseudo-rebel” and Mattson’s comprehension of the “Material Girl” video, in particular, is weak tea. He doesn’t have anything to say about Madonna as satirist of consumer culture, or any willingness to allow that she was a true cherry bomb in the system, exploding notions of what women in music could do and reclaiming her own sexualization in a strongly feminist mode.

Blondie‘s winking intellect likewise gets flattened by accusations of selling out. As for Danceteria, how could a historian not see the rise of Club Kids intersected with punk ideology and engaged in an anarcho-syndicalism afforded breath-taking moments of queer liberation? But Mattson keeps a tight focus on that synth-pop hangover from disco, and all the dancing in front of big screens televisions without so much as a mention of Club Kids founder, music promoter, and serial killer, Michael Alig.

Mattson is a little black and white, cherry-picking examples or ignoring things that happen after 1986, but so what? The glories of Sonic Youth and R.E.M. may be absent, but delicious take-downs of Michael Jackson and Sylvester Stallone are usefully present. He crams a hell of a lot of good bands and good ideas into a meditation on Reagan’s presidency. And it isn’t just bands, but also illustrators from artists like Raymond Pettibon to Matt Groening, filmmakers from Penelope Spheeris to Jim Jarmusch, science fiction writers like William Gibson, and poets like Dennis Cooper.

I couldn’t rightfully call myself a punk if I didn’t gripe about some of that other stuff, but the fact is, We’re Not Here to Entertain does very nicely the job it sets out to do. It’s a solid addition to any punk’s slim library about our history, and we have a lot to learn by studying that history, even if we remain doomed in the culture wars to repeat it.