What if Mr. Rogers, beloved children’s television entertainer and educator, had a breakdown? And not just any breakdown, what if it was a complete and ongoing fiasco, one that involved trauma, grief, and even a romantic break-up? If there’s any tension to be found in watching Mr. Rogers’ Neighborhood as an adult, it’s in seeing this clean-cut almost impossibly nice man express positive messages to kids while wondering: is this guy crazy?

In Showtime’s Kidding, this is the central question, more or less (though it’s mostly more). Jim Carrey plays Jeff Pickles, a famous and revered children’s TV entertainer. He’s every kid’s guiding light and comforting shoulder, a regular beacon of stability; he’s also recently lost a son in a car accident and separated from his wife. He’s trying to find meaning in a suddenly unfathomable universe. So there again, tension: what if Mr. Rogers was coming unglued and didn’t have all the answers to his or anyone else’s problems? The first season of Kidding sets out to push its protagonist as far as it can towards just such an answer. After ten episodes, it doesn’t quite manage it—though not from lack of trying.

Seasoned by years of writing for Weeds, creator Dave Holstein has a feel for the dichotomy between a person’s outer presentation of self and their conflicted inner life. In Kidding that division is made easy: there’s Mr. Pickles, and then there’s Jeff. Left to manage both halves is the Pickles family, including Jeff’s stern father Seb (Frank Langella), his strained sister Deirdre (Catherine Keener), his soon-to-be ex-wife Jill (Judy Greer), and his son who lived, twin Will (Cole Allen). In turn, each of these characters (and still others) are dealing with their own issues—in their home and work lives, in their relationships to each other, in their own identities.

To animate its approach, Kidding leans on the creative presence of director Michel Gondry, director of six episodes, if for no other reason than to allow him his usual cinematic flourishes. The children’s show-within-a-show here, Mr. Pickles Puppet Time, lends itself well to Gondry’s particular brand of yarn-and-felt aesthetic, with an army of puppets (including a talking baguette) on hand to do some of the emotional heavy-lifting. While the results are often uneven, the show grants Gondry the freedom to veer sharply between comedy, drama, romance, and the absurd.

Gifted with a cast of talented actors, meanwhile, Holstein and his writers unleash Kidding in all sorts of unusual directions too. Langella, the surly standout, provides a dry underlining presence as the father trying to do right by his son (and his TV empire); Keener inhabits the vulnerability of failure as the less talented Pickles sibling (with her own crumbling family); Greer gets a few chances to punch past the usual nagging wife archetype (though just barely); and relative newcomer Allen holds his own, even capably playing both sons, Phil and Will, in different moments. They bring to life people you wouldn’t normally find in Mr. Rogers’ neighbourhood.

And then there’s Carrey, the show’s natural anchor. His Mr. Pickles is a man at odds with himself—and at times with Kidding itself. He’s asked to sing and use puppets, to rage and shed tears, to express passion and remain calm. If nothing else the show reminds us that a fully engaged Carrey still has plenty to offer as a nervy performer. As with his best work, it’s impossible to envision anyone else in the role. It’s not easy threading that Mr. Rogers needle, to present both the exterior and interior lives of a complicated man—especially one coming apart at the seams—and yet Carrey makes it go. Kidding doesn’t always have something useful for him to do, but without him, there’s no show.

Centring on Mr. Pickles’ pain, Kidding becomes a show about a man whose celebrity, cultural stature, and financial security are unlikely to disappear, and yet he’s still unhappy. It’s not hard to see what drew Carrey to the role in the first place, given the parallels in his own life and career. For his first serious return to television in over 25 years, he picked a challenging role, one that has him pitching through all sorts of emotional tenors, working with great actors, and reuniting with Gondry, who directed him through one of his more noteworthy performances. Carrey’s heart, along with that of the show, definitely feels like it’s in the right place. 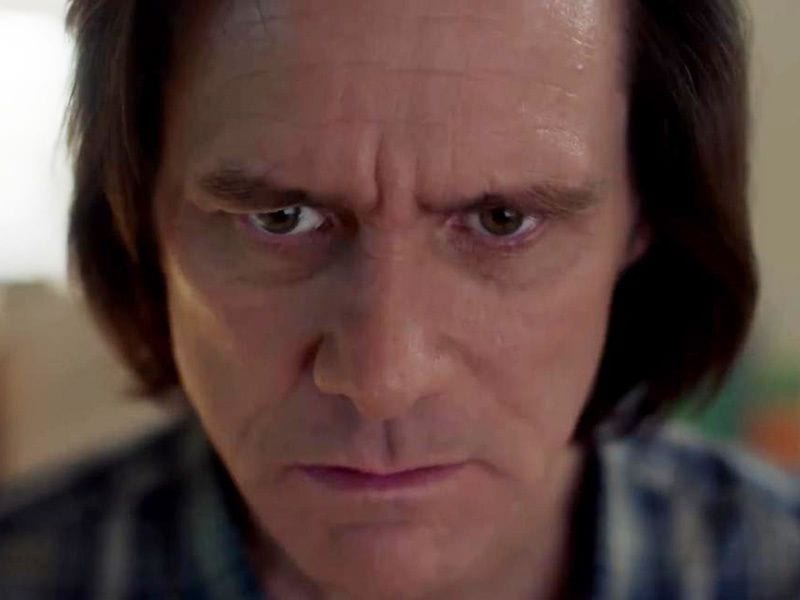 But a handful of punchlines and visual leaps aside, Kidding is not nearly as inventive as it would have us believe—or profound as it thinks it is. Sure, Tara Lipinski appears as a bizarre version of herself, the filmmaking technique on display is often laudable, there’s a Japanese man (Louis Ozawa Changchien as Mr. Pickles-San) who can speak English only through a puppet, and so on; the expected quirk factor is there. Its summation, however, amounts more to easy aphorisms than a difficult emotional reckoning. The show’s inability to settle on any one tone, by fractured design or not, doesn’t help. It gives us unending reasons as to why poor Mr. Pickles is coming apart, answering the aforementioned “crazy” question early and often. Yet the trials and tribulations of Jeff and his family eventually force us to ask something else: why should we care? 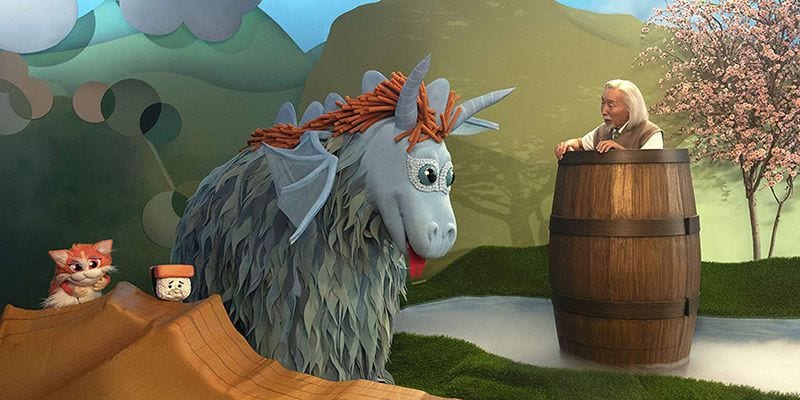