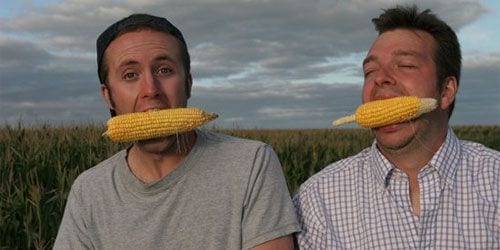 “Everything on your plate is corn.” This pronouncement by Professor Michael Pollan of the University of California more or less sums up the point of King Corn, an amiable 2007 documentary about corn’s dominance in the U.S. economy that premieres on Independent Lens on 15 April. The not-quite-a-quest format is established in the first moments, as Ian Cheney and Curtis Ellis scuffling along linoleum hallways, en route to someone’s office. “When my best friend Curtis and I graduated from college,” Ian’s voiceover informs you, “We thought we were done with professors.” But now they’ve decided to visit one, Steve Macko, head of the Macko Isotope Geochemistry Laboratory, in order to ask questions about life and death.

Specifically, Curtis explains, they’ve become worried that they’re part of the first U.S. generation “at risk of having a shorter lifespan than our parents.” Wait a beat: “And it was because of what we ate.” Following the trails blazed by Michael Moore and Morgan Spurlock, Ellis and Cheney mean to pursue this problem, setting themselves as guides through the thicket of American agricultural and business practices, revealing that, no surprise, the system is premised on and driven by money. Along the way, they also find that the typical American diet is unhealthy. At least if you gauge “typical” by what they eat, indicated by a brief montage of foods framed by a scribbled list of cinnamon rolls, pork sandwiches, fries, sloppy joes, sausage patties, and “juicy, creamy donuts.”

A few lab tests at Macko reveal that what they’re eating has affected their bodily compositions, and moreover, that these compositions are mostly made of corn. Given their preferences for meat and sugary products, this gives pause. And it also gives a point of departure for the documentary to follow. Per the “body adventure” format, Ellis and Cheney embark on a project that involves travel: they leave the East Coast for Iowa, and set up to plant corn on an acre of land for a year. This plan grants a neat month-by-month structure, sketched on screen, as well as some excellent footage of the beautiful land out there where corn “comes from,” with seasons changing in poetic wide shots.

“For some reason,” they muse, “We felt drawn to the Midwest,” as the camera shows them gazing on giant trucks and ordering biscuits with gravy. Once ensconced in Greene, Iowa (pop. 1015), the boys solicit advice and on-camera expertise. They visit the Mitchell Corn Palace (all décor made of colored corn, with encouragement for free: “Everything starts out as a dream,” says the Palace director as they leave). Then, having arrived in town in February — whiteness as far as the eye can see — they’re informed, “On the modern farm, you don’t have to wait for the snow to melt before you can get to work.” And so the film launches into a kind of instructional montage mode, as Ian and Curtis must wait and so actually learn what type of corn to plant, how to measure their acre, which machines to use, and when to do what. They also get some gently framed political background, concerning farm subsidies and the damage done in 1973 by Secretary of Agriculture Earl Butz’s edict to mass produce via cost-saving technologies, thus sending small farmers into increasingly dire straits.

While they learn a few details about distant relatives (both coincidentally have great grandfathers or third cousins who farmed in Iowa), the film doesn’t provide this almost interesting storyline a chance to take off. Instead, the boys step to the background, their frankly bland affects giving way to the focus on Big Bad Corn.

This story has to do with engineering. “Industrialized corn,” say Pollan, is all about yield. Designed now so plants grow closer together, the new corn is “kind of an urban creature, it lives in these cities of corn.” All this yield, the boys discover, is not for direct human consumption, but more often directed to feedlots. Cattle are increasingly not grazing their way into “fatted” states, but are instead locked into stalls and fed corn — usually ethanol byproduct, a “flaky” substance that “the livestock likes,” according to one feedlot manager. A trip to Bob Bledsoe’s Bledsoe Cattle Company initiates a critique of the industry: a shot of cows chewing in their metal headlocks, ears tagged because all they mean in the world are the slabs they become, suggests the system’s essential immorality, if you understand cows as creatures who might feel badly as they’re condemned to such a fate. A subsequent sequence points out the diseases the cows contract, due to the fact that they are “not meant” to eat only corn.

Corn’s toxic effects extend beyond the cattle it helps to rush to market. The movie reveals as well the effects of corn syrup, which Ian and Curtis find in every item they check in one convenience store aisle. When they seek out the formula for high fructose corn syrup, they’re told that no cameras are allowed in any plants: Audrae Erickson, spokesperson for the Corn Refiners Association, says, “It’s as much about the security of the food as it is your personal safety,” though neither point seems clear. An insert of the boys nodding and looking perplexed on the other side of her desk supports our inclination to mistrust her.

The film’s own points are plain enough when the targets are less specific. A sugary diet makes an easy mark, revealed when Ian and Curtis head to Brooklyn and meet a cab driver. His life story — along with those of his relatives — is shaped by sugar and corn syrup, and most everyone suffers from diabetes. A doctor explains that nearly one in eight New Yorkers has Type 2 diabetes, with no cure in sight, only management. Rethinking their year’s work as producing “essentially an acre of sugar,” Ellis and Cheney learn as well that “cost has a lot to do with what people buy,” and the cheaper products tend to be made with lots of corn syrup. And so, the film concludes, corn’s domain and dominance look secure for the near future.