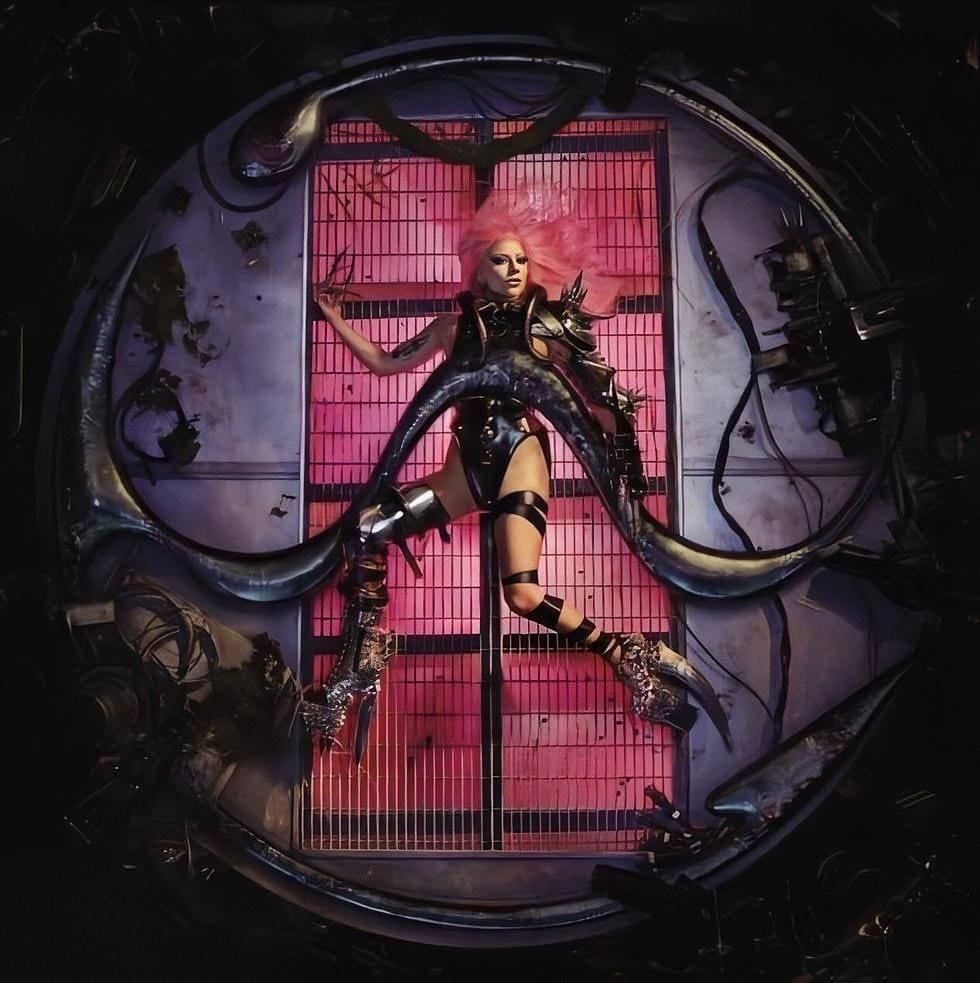 She’s one of the biggest pop stars of the decade, and still, after all the chart-toppers and accolades, Lady Gaga feels most comfortable behind a mask.

From the egocentric pop parody that we first met on 2009’s The Fame to the male persona she trotted out on stage during her Born This Way era (whose name, for those keeping score, was Jo Calderone) to the unsuccessful everygirl heartland reinvention she attempted on 2016’s much-maligned Joanne to the actually-successful everygirl heartland reinvention she pulled off with 2018’s Academy Award-winning drama film A Star Is Born, one can feel that despite her celebrity status and fairly constant radio presence, no one really knows who the real Lady Gaga is. Fans will write glowing overviews of critically wronged records, she’ll perform at the Super Bowl Halftime Show to an audience of millions, and she’ll reveal her medical struggles in a widely-seen Netflix documentary, but at the end of the day, “Lady Gaga” feels less like a human and more of a construction, faceted together with glitter, club lights, and pure good-old-fashioned talent.

Yet Gaga was always smarter than her dance-pop contemporaries. In crafting these ever-shifting, sometimes outrageous public personas, she was able to grab all the attention and absorb all the flak in equal measure, even netting a Top Five hit in the US with a song that contains the line, “One second I’m a Koons / Then suddenly the Koons is me.” She understood that pop music was designed to be ridiculous, or at the very least, was memorable when it was at its most absurd and campy. There were pieces of her real feelings and beliefs in every outrageous outfit and curious side project. Despite bearing parts of her inner life throughout Joanne, Gaga still felt most comfortable in keeping her listeners at an emotional arms’ length away.

All of this makes Chromatica, her sixth studio full-length proper, such an utterly dynamic record unlike anything else in her discography. On the surface, it is a concept-free, back-the-basics dance album that is meant to be played straight through without interruption, modeling itself somewhat like Madonna’s late-era masterwork Confessions on the Dancefloor from 2005. With only one song tipping past the four-minute mark, she blazes through 16 tracks in all of 43 minutes, making for a ballad-free listen that is at times both relentless and revealing.

Despite the weighty title and the existence of three orchestral interludes (all co-written by the brilliant Morgan Kibby of White Sea), Chromatica only aims to get you moving. While Gaga’s debut back in 2009 technically strived to do the same thing, her label still forced her into collaborations and styles she wasn’t the most comfortable with, making it more of a contemporary genre sampler than it was a dance record straight through. In following up her movie star breakthrough and Oscar win, Gaga could’ve gone self-important and serious, but instead went against expectations and made arguably the most immediate pop record of her career.

Yet despite all the bright beats provided by producers BloodPop® and BURNS, Chromatica, at times, feels like it’s Gaga’s most raw-nerve record despite all the throbbing bass and sparkling synths. “Rain on Me”, a pulsating hard disco collaboration with Ariana Grande and already one of her all-time greatest singles, flies through its three-minute run time so quickly you barely realize it’s about alcohol abuse. Its chorus repeats the phrase, “I’d rather be dry / But at least I’m alive”, a sad resignation despite all the glistening wah guitar folds. On “911”, she talks about ingesting an anti-psychotic medication, evoking her own Fame Monster-era Eurodisco stomp. She notes how “My mood’s shifting to manic places / Wish I laughed and kept the good friendships” before admitting in the chorus that “My biggest enemy is me ever since day one.” Gaga is still hiding behind vocoders and numerous filtered vocal effects, but Chromatica‘s best moments are the ones where it feels like Gaga’s real life and experiences are seeping through the gaps in the 4/4 rhythm chains.

Although the record opens with its least memorable track (the pleasant if middling “Alice”), most of Chromatica remains breezy and stupidly fun. After already having played a pop star in A Star Is Born and writing dance-pop numbers that served as a commentary on the current radio market, there is no need for meta-narrative or genre inversions here. Instead, Gaga uses Chromatica to explore lyrical and musical themes that, if not personal, are playful and sometimes downright absurd. The exuberant lead single “Stupid Love” struts about in DayGlo colors as it speaks of wanting love and pretty much nothing else. The Elton John duet “Sine From Above” ends in a full drum ‘n’ bass breakdown because why the hell wouldn’t you want to hear an Elton John duet end in a full drum ‘n’ bass breakdown? The collaboration on paper is already camp, but the production takes the concept into absolute overdrive.

Yet even if
Chromatica isn’t critical of the world it inhabits, it is, at the very least, self-reflexive, with Gaga interrogating not her biography instead but her pop star past. “You know the paparazzi love The Fame / even though you know it causes me pain,” she sings on “Fun Tonight”, as if lamenting that her least favorite artistic output remains her most popular. Similarly, on the record’s standout track “Replay”, she comes to terms with her artistic self, noting that “the monster inside you is torturing me”, which itself is a reference to feeding her ever-devout fanbase who call themselves Monsters. “Monster” is a coded word within her fandom, and its use here is deliberate, because “demon” is also two syllables long and achieves the same effect. “Every single day, yeah, I dig a grave / Then I sit inside it, wondering if I’ll behave,” she laments over a paranoid beat made of eerie ascending ghost vocals.

In what may be her greatest act of artistic subterfuge, Gaga very much seems at war with her career in these lyrics, housing these battles in an album that was designed to take her to the top of the charts. Some might see that move as crass while others see it as genius, but no matter how self-defeated or probing she gets on
Chromatica, that tension between her words and the album’s unstoppable BPM makes some extremely compelling pop music.

Weighed down by lesser songs like “Alice”, “Enigma”, and the blissfully short BLACKPINK collaboration “Sour Candy”,
Chromatica isn’t quite a full-bore masterwork. Still, given the thundering club-filling fun and layered meanings revealed upon relistens, it is assuredly the most lively and consistent record she’s made since Born This Way, embracing everything great about her dance-pop early days and giving it a fresh twist, going so far into her ever-arching Madonna imitation critiques by closing out the record with “Babylon”, a beautifully shameless rewrite of “Vogue” if there ever was one. Lady Gaga may be hiding behind a different mask this time, but she’s never sounded like she’s having so much fun as in this shiny new persona.