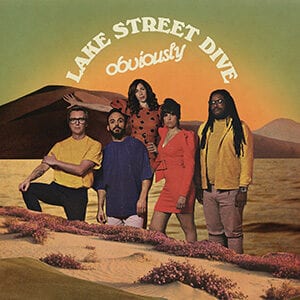 Don’t let the “Dive” fool you. This is no bleary-eyed bar band that’s rousing the regulars, banging out roughshod rock ‘n’ roll. On their latest album, Obviously, Lake Street Dive once again make a smart, soulful pop that hums along with the integrated precision of an Indy race car.

The initial attraction here is the silk-and-smoke voice of Rachael Price, but as winning as her vocals are, she is whisked along by a great band that falls in place around her like a Secret Service detail cutting through a crowd. As a frontwoman, Price is like a classic rom-com sidekick: clever, funny, cool, and unflappable. She just happens to have a voice to die for. If the “Dive” in the band’s name signals anything, it is that their warm affability can sidle up to you like an old friend during a night out drinking.

The tightly knit sound is a result of the egalitarian work routine of the bandmates, who have been writing and arranging together for 14 years. If part of the appeal of their personable pop is their college-buddy vibe and the band seems like a musical spinoff from the sitcom Friends, it is because they are just that. The original four players met as students at the New England Conservatory in Boston and began experimenting together with the music they all loved – everything from jazz to country to Motown to the Beatles. (When they added a fifth bandmember, the then-quartet took him to dinner and presented him with four engagement rings.)

Their love of retro has bonded them with fans: An achingly slow, swinging take on the Jackson Five’s “I Want You Back” went viral on YouTube and helped propel them to national attention. And a perennial perk for fans is their dressing up each Halloween to play a cover tune.

On Obviously, they show that their tireless touring over the years has honed them to diamond hardness: their sophisticated arrangements don’t waste a note or make a false step. Throughout, listeners may be reminded of past pop tunes – here an echo of “On the Boardwalk”; there a soupcon of Tammi Terrell and Marvin Gaye. But the vibrant songs are executed so well that one’s never tempted to dismiss them as mere copycats.

While the songs are mostly clever takes on the perennial themes of romantic love and the first flush of attraction, there are some ventures into more topical subject matter. On “Being a Woman”, despite the jaunty, finger-snapping rhythms, the song ruefully chronicles that “being a woman is a full-time job”, one with less pay and glass ceilings. On “Making Do”, Price tips her hat to a younger generation struggling through an increasingly tough world.

On the lead single, “Hypotheticals”, Price playfully sings to a potential lover about the promise she sees ahead for them: “I’ve been playing out a lot of hypotheticals in my mind / I’ve been writing your name down next to mine.” Throughout Price doesn’t just hit each note, she makes them all her own—bending up, sliding down, trilling, swooping; taking off from the band’s rock-solid foundation.

The album ends with two more experimental songs. The low-and-slow swing of “Feels like the Last Time” blends a spare, old-timey instrumental accompaniment with idiosyncratic elements such as subtle beatboxing, ukulele-like strumming, and melodica, with Price’s bold bluesy singing on a low glow, wrestling every syllable. On “Sarah” the band sets aside its instruments for a multi-layered Enya-esque a cappella sound with the group’s vocals turned into ethereal electro-clouds swirling around Price’s central vocals.

It is as easy to like Lake Street Dive as it is to overlook the bandmates’ skill at making artful pop. While always soulful, the band never swerve into extremes, never flashing anger or getting too deep into the pain of love. The Lake Street drive they take you on is always smooth and breezy.