In an era of spoilers, social media, and internet memes, it’s hard for shocking secrets about a well-known comics character to stay hidden. If a movie like Empire Strikes Back came out today, there’s little chance the big revelation at the end would’ve gone unspoiled for long. Trying to keep these big reveals hidden just isn’t feasible anymore, which makes it exceedingly difficult for big revelations to have an impact.

This narrative device can still work, though, and Margaret Stohl has been demonstrating just that in The Life of Captain Marvel. With an upcoming Captain Marvel movie starring Brie Larson set to release in 2019, the timing is right for a shake-up in Carol Danvers’ life. Her story isn’t nearly as iconic as Wonder Woman’s or Captain America’s, however. She has a past full of blind spots and unresolved plots. She also plenty of current issues, but her ascension to Marvel’s A-list happens because she looks forward and not behind her. Stohl finally changes that by having Carol do something that rarely comes easy for her, which is to turn inward.

It’s an overdue, but refreshing insight for a character who prides herself at being on the front lines of every major conflict, be it an alien invasion or a Hydra infiltration. The Life of Captain Marvel doesn’t involve an ongoing battle or even an emerging one. Instead, it digs deeper into the human, that is, the “non-Kree” side of Carol. It begins with a personal crises that takes her back to her roots in Harpswell, Maine. It explores unresolved issues with her family that only get compounded when she uncovers some distressing revelations about her parents. It culminates in a major reveal that hints that Carol’s connection to the Kree go much deeper than an accident with the Psyche Magnetron. 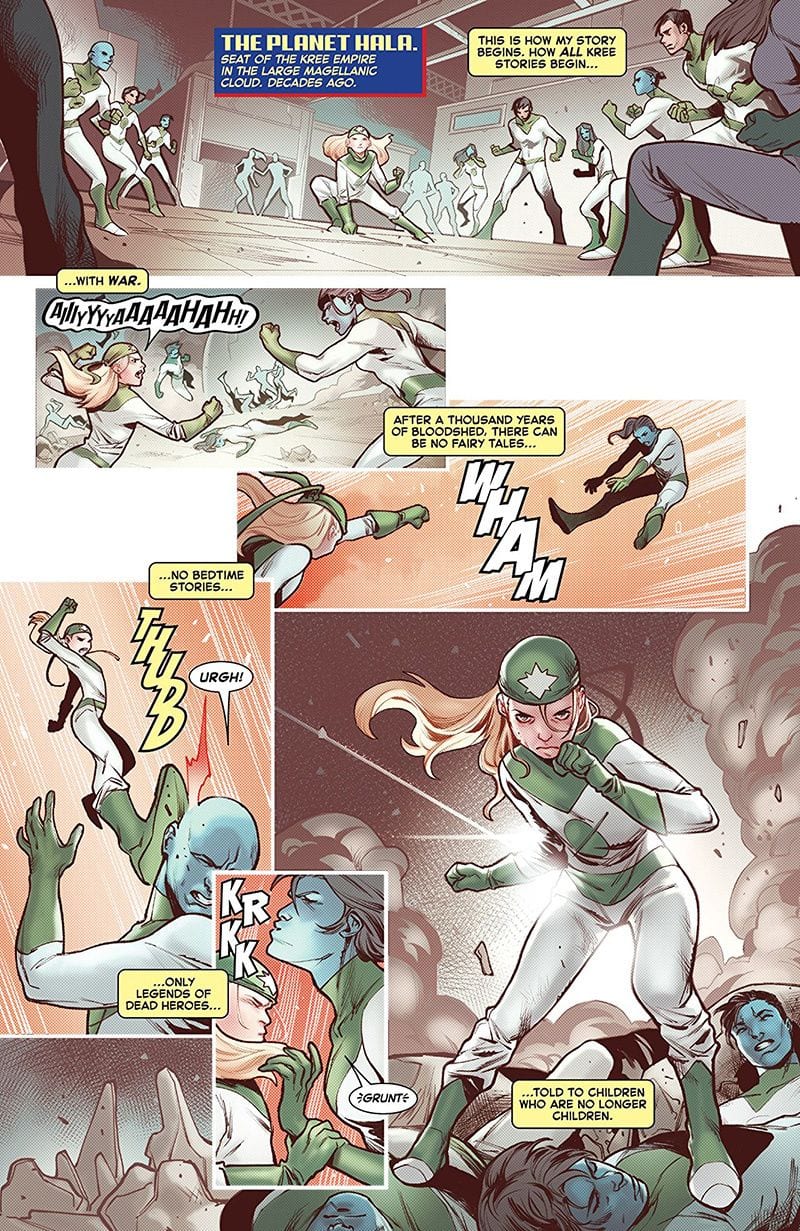 The Life of Captain Marvel #4 lays bare the secrets that irreparably change Carol’s understanding of who she is. It doesn’t rewrite her history, but it adds a host of new details that put who Carol Danvers is into a different context. To some extent, it adds more connections to her heroic journey. Before, Carol is just a headstrong pilot who gets caught in the crossfire when an alien weapon explodes. The powers that made her Ms. Marvel, Binary, and Captain Marvel are essentially a fluke that Carol has accepted for years.

Carol’s mother shatters that assumption, revealing that her heritage isn’t just affected by the Kree — she is Kree, at least in part. The reveal isn’t on the same level as Darth Vader telling Luke Skywalker that he’s his father. However, it does shake Carol’s world in a way that a billion Skrull warships can’t hope to match. She still gets her powers from Psyche Magnetron, to some extent. Her journey from Ms. Marvel to Captain Marvel isn’t radically altered in any way. To some extent, it adds some clarity to Carol’s story, as well as fresh insight.

Carol’s story is inescapably linked to Marvel’s vast cosmic landscape full of space gods, inter-stellar wars, and talking raccoons with machine guns. Suddenly, her never-ending desire to look to the stars and fly higher than everyone else makes more sense. What happens to her no longer seems contrived. It almost makes too much sense. 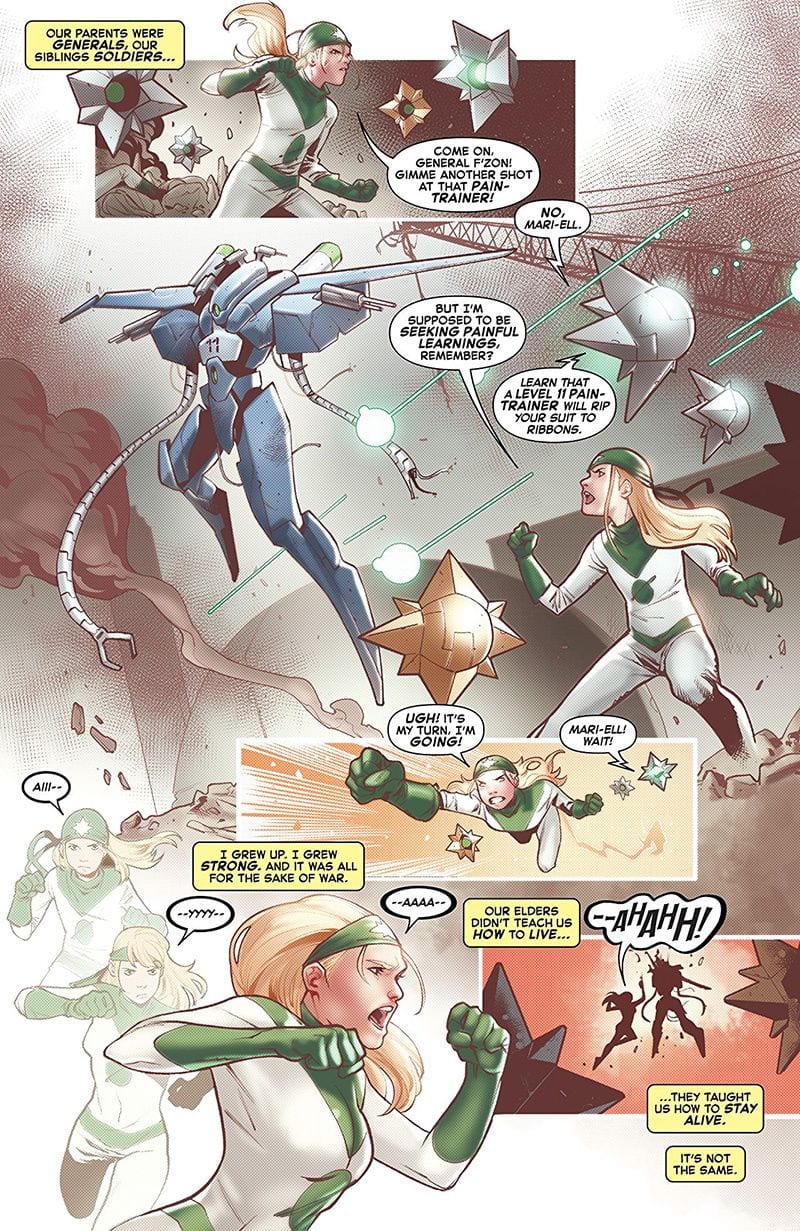 That can be a flaw, to some extent, but Stohl frames it as part of Carol’s journey. The whole reason she comes home to Harpswell is to reconnect with her human side. Ironically, doing so leads to learning about her alien side, but the results are the same. She now has a better understanding of who she is and why she has been feeling so disconnected from the world.

Much of the narrative in The Life of Captain Marvel #4 is told through Carol’s mother. Her story, which hasn’t been explored up to this point, acts as a catalyst for this revelation. It’s not the most original story. It involves an alien woman falling in love with a human man, a plot that Star Trek has been doing for decades. In the previous three issues, Carol’s father comes off as a generic drunk who may not have even been faithful to his wife. From these revelations, his behavior takes on a very different context. What it lacks in nuance, however, it makes up for with heart.

Her mother seeks to nourish Carol’s desire to explore the stars. Her father seeks to protect her from the threats he knows are out there. Two parents who love their daughter have different ideas about protecting her. It leads to disagreements and fights, which feel even more fitting now that there are Kree agendas involved. Those ideas prove intractable, but their parental instincts are never misguided.

This story goes for all the right emotions, bringing family and identity together in a way that adds new layers to the life of Captain Marvel. That’s not to say every revelation fits perfectly. It seems like there’s something lost from Carol’s persona, now that she’s not entirely human. The idea that an ordinary human gets infused with alien DNA to gain powers has plenty of appeal. Like bites from radioactive spiders, though, it’s still contrived to some extent.

In that sense, it helps that Carol’s backstory isn’t as iconic as Spider-Man’s or Superman’s. More than any other Marvel superhero character, how she gets her powers is less important than how she uses them. The Life of Captain Marvel #4 gives greater meaning to her choices while laying the foundation for new complications, some of which manifest at the end. In the history of Carol Danvers, this story has all the traits of a defining moment for a character on the rise. If Brie Larson can capture even a fraction of the spirit in these pages, then the future for Captain Marvel is very bright. 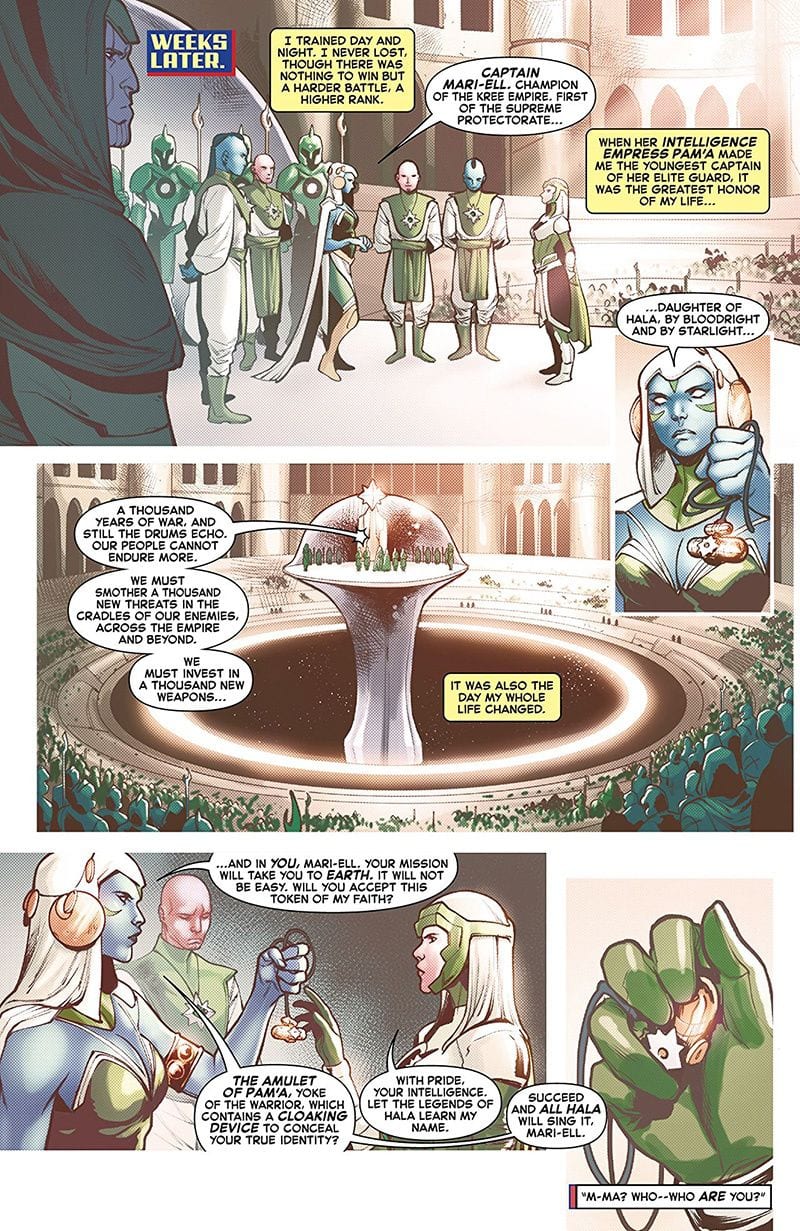