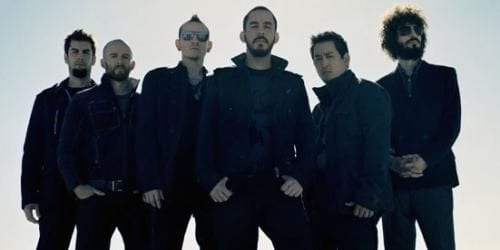 Linkin Park arrived on the music scene riding the wave of its hybrid sonic chutzpah. The timing was right; this was the late-1990s, when several other hybrid bands such as Limp Bizkit, Korn, and Rage Against the Machine had risen to prominence and high record sales. (The long-lasting 311 also comes to mind, but its set-up is more indebted to punk, thrash, and reggae.) With Linkin Park, Mike Shinoda played the role of the suave rapper, the clever and capable wordsmith. Chester Bennington played the conventionally metal role of the sensitive but angry lead singer. Throw in a DJ, bassist, drummer, and a guitarist, and you have a pretty decent band; the group may have been consciously manufactured, but the music was still good. At the time it was an effective paradigm, and it worked well live, too. When the band’s breakthrough album — Hybrid Theory (2000), which featured “One Step Closer” — came out, the band was one of the premier acts in this new genre, ridiculously dubbed “nü metal.” (Old metal did not feature rap, apparently.) The band’s sophomore album — Meteora (2003) — also did well, producing four popular singles. But it’s 2008, and the “nü-metal” genre is all but a cadaver. Minutes to Midnight (2007), the band’s most recent album, concedes this loss, and adroitly moves on from it. The album reinforces Bennington’s sensitive persona while relegating Shinoda’s posture of urban bravado largely to the margins. The band also has a new conceptual focus, exhibiting something of a social conscience in its lyrics and its extracurricular activities. During Linkin Park’s nearly sold-out concert in Oklahoma City, the audience recognized this shift in emphasis and gleefully welcomed explicit, quasi-political songs such as “What I’ve Done” and “The Little Things Give You Away” (which allude to Hurricane Katrina and our disaster of a government). But this audience would have welcomed a Chester Bennington effigy with great applause: the crowd got hot and bothered when even the faintest hints of fake smoke hovered about the stage and when mere names were shown on a screen. Utter hero-worship ensued later in the show as security guards physically supported black-clad Bennington in one position — for several songs (most notably, “Crawling”) — amidst the rabid, pious crowd. And Bennington, clearly the golden boy of the group, worked the crowd with aplomb. He circled the stage several times over, shaking hands and singing along the way. This extensive band-audience dynamic was something of a marriage between a rendition of Handel’s Messiah and, perhaps, a Barack Obama presidential rally; it would be only minutes, I pondered, until tears of joy would be shed and a newborn kissed. Instead, to my left, a fanatical, obviously imbibed young lady lost her balance and tripped down the aisle’s steps. The band energetically opened with the undeniably cathartic new song “What I’ve Done”; it was a fitting choice. Several of the band’s songs, of course, begin with a brief, slick intro, but this intro sounded like a cunning variation of the score to John Carpenter’s film Halloween. It functioned to increase audience anxiety before the band arrived; when the group did slowly appear, a seemingly arbitrary crushing guitar-lick struck with high drama. Yes, the show had begun. Though three songs were played in less than ten minutes, this was no punk show. Bennington’s voice sounded delicate if not outright shot — at times. He explained he was ill but would soldier on anyway, and he did. The band played a full, 90-minute set, but throughout, its vocalists — Bennington and Shinoda — flattered, praised, and buttered-up the audience. Several times over, the band suspiciously cited Oklahoma City as its favorite city. What about heavier-populated cities such as Dallas and Houston, both of which were represented on the band’s Live in Texas? Such blatant, cynical pandering was nauseating to behold. Bennington made, for example, innumerable unironic, messianic, arms-raised, over-the-top gestures; during some of his more challenging lines, he simply waved his microphone to the crowd.

Linkin Park’s ostentatious crowd-kissing was not just sickening — it was unwarranted. So much of the band’s music was compelling as well as lively in performance. The music stood out on its own; there was no need for band members to “keep it real” with the crowd. Moreover, many of the band’s best songs tonight were performed without over-working and over-courting the audience. Besides the emotional purgative “What I’ve Done”, an extended version of “Bleed It Out” stunningly displayed the band’s raw talent. The song featured a minimalistic but potent solo from drummer Rob Bourdon and a memorable, spirited version of Bennington’s chorus. During the pseudo-anthem “Shadow of the Day”, Bennington’s vocals were remarkably superb and on target. The audience sung along, waving lighters and cell phones in unison, while Bennington worked a Flying-V guitar during the tail end of this song as well. But the band reserved its finest material for the encore, which featured two heavier, guitar-driven cuts: “One Step Closer” and “Faint”. These songs tested Bennington’s vocal chords considerably, but he and the rest of the group pulled through. Ultimately, it had turned out to be a damn fine show — if one focused on the music and not the perpetual hype-machine.