Listen All Around: The Golden Age of Central and East African Music
Various Artists
Dust-to-Digital

How much do you know about postwar Sub-Saharan African history? How about the cultural and musical climate to emerge from the region? Maybe you know a lot, and if so, consider this portion a refresher. For the rest, we should not feel ashamed to admit ‘not much’—as long as we take it as a learning opportunity.

The challenge of appreciating music from another time and place, especially one so distant from our own, lies not only in the appreciation of new sounds but also of why these sounds are the way they are: politically, socially and technologically. Music may be enjoyed on a purely aesthetic basis, but our enjoyment is all the richer when we look at the story behind it. Now, when dealing with the two-hour compilation Listen All Around: The Golden Age of Central and East African Music, the story is manifold, of many different peoples across a huge landmass. If we agree we must start somewhere, this collection may be considered a fine place to do it.

The 1950s through the 1970s marked a major period of change in Sub-Saharan Africa. Many nations were gaining independence from colonial rule, and with that came new regimes. Naturally, the rallies and inaugurations needed soundtracks. And these days, African musicians could earn a living, sign with record deals and tour in neighboring countries. Music recording and production technology advanced as music consumption became more accessible. Of particular importance was the growing popularity in the gramophone. Families could now listen to records in their own homes, or through the sound-systems at events. This period can be considered the golden age of African popular music. 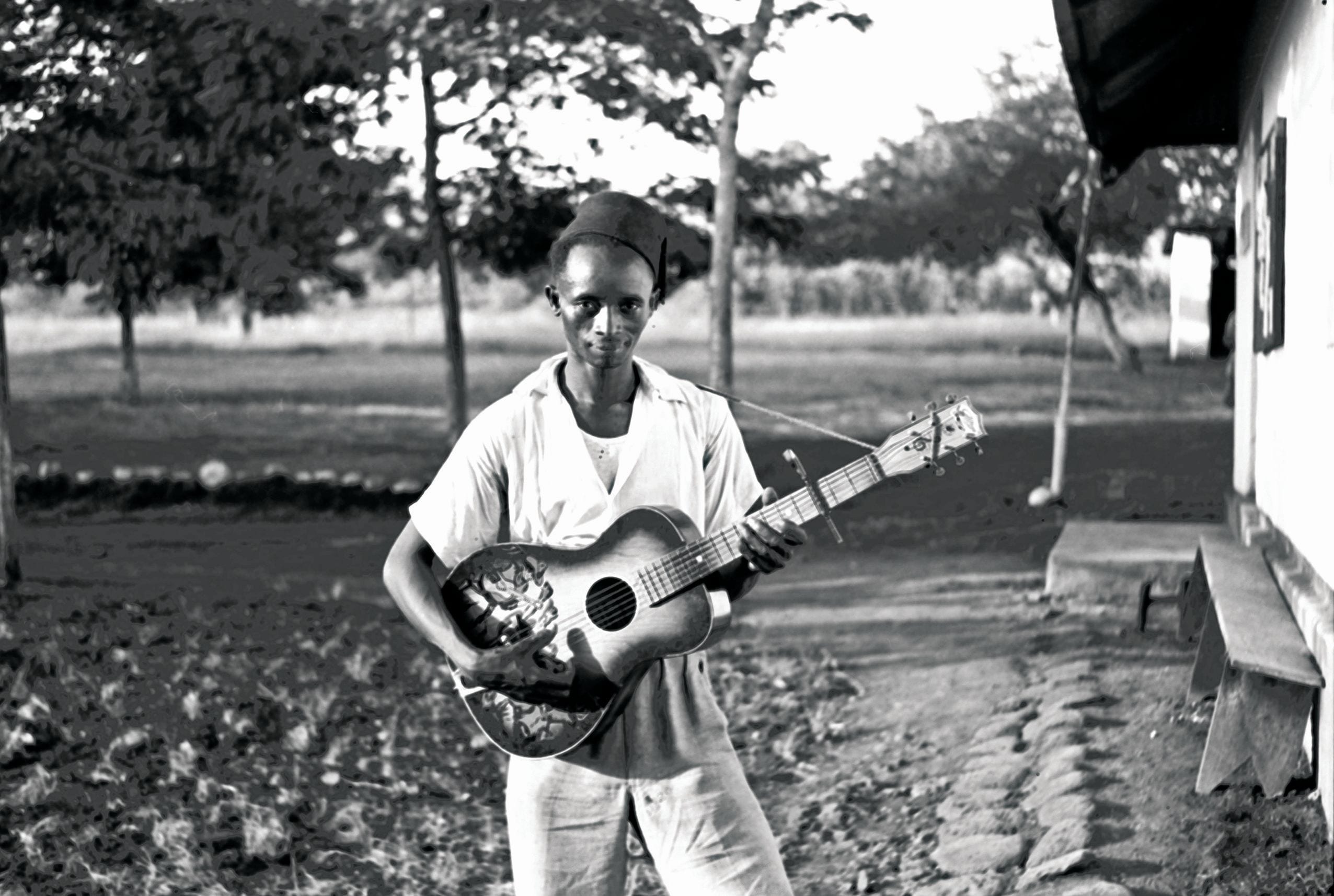 Increasingly, people wanted popular music, music to dance and make love to. The 1950s saw the rapid emergence of town or rumba music, a broad term for popular music of the day. (The interrelationship of Cuban rumba and African rumba is complex, and the terms are not interchangeable.) Much of the music from this period distanced itself from traditional music, focusing on global sounds. African soldiers had returned from the war carrying new songs in their hearts and record their hands. The continent became exposed to European folk, hymns, military music, brass bands; American jazz, country, Hawaiian; and African jazz, highlife, kwela, among so many others—all of which can be heard in this collection.

So what do we have here? 47 re-transferred and remastered recordings, the majority recorded by ethnomusicologist and field-recordist Hugh Tracey. The recordings come from three separate expeditions made during the ’50s across Central and East Africa, in particular: Rhodesia (now Zimbabwe), the Belgian Congo (now the DRC), Kenya, Tanganyika and Zanzibar (together now Tanzania).

Tracey was born in 1903 to British parents. His exposure to African music came during his time working in his brother’s tobacco fields in Rhodesia, the root of his obsession with documenting and anthologizing indigenous African music. His work would become critical in the early wave of ethnomusicology, the outward-facing, “non-western” kind of anthropology seen in many of the classic Folkways Records from the US.

On his expeditions, Tracey would set up temporary recording studios or utilize existing studios in schools, radio stations, and welfare centers, inviting locals to perform. He, his wife Peggy and their crew faced many challenges along the way, succumbing to illness, property damage and other misfortune. The sheer heft, volume and relative primitivism of their equipment left a lot of room for technical error. In her journal, Peggy wrote that team endured significant miscommunication and criticism, writing that Europeans were “uninterested in African questions or Africa altogether… consider[ing] their music as dying or dead and Hugh a crank and dreamer or museum collector.” Still, the Traceys forged on and on.

A 1968 New York Times piece profiles Tracey after his receipt of a $145,000 grant (over $1 million today). About the place of his recordings, the author writes: “In the United States, African music has become one of the tools used by black cultural and nationalist groups to instill a sense of tradition and pride in Negro youngsters. In New York, it has become a staple for cultural instruction in black-ghetto schools and a source of pleasure at gatherings.”

Later in the article, Tracey speaks about “get[ting] back to the bush to find the people who have not been disturbed by outside influences…. Most people who have studied African art have done it to interpret the art to themselves. Our job is now to go into the African environment, study it scientifically, and codify it in such a way that the Africans themselves will understand it.” Indeed, Tracey was known for his scholarly analysis of the music. As the liner notes put it, “He avoids the well-meaning but patronizing tendency to suspend critical judgment in relation to Africa, and he holds African music to the same lofty aesthetic standards he applied to all music.” 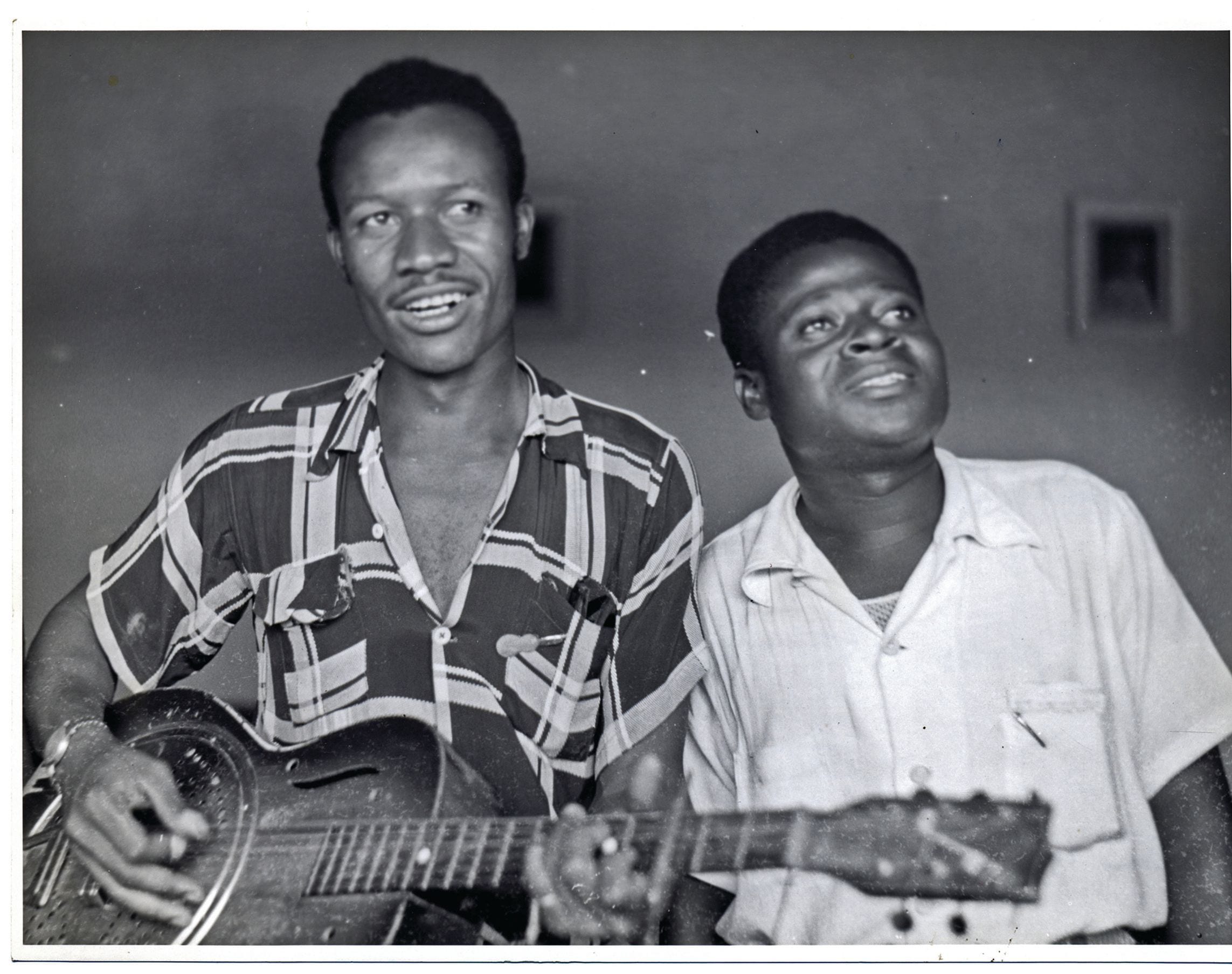 So what does this music sound like? One may have a hard time describing the music without a vocabulary of instruments, modes, tunings and the like. And I’ll argue that to speak broadly about this music would be to disrespect the great variety of music within, to homogenize and reduce it to “African music”. Still, it’s natural to seek similarities between songs, especially when outside our familiar realm.

Immediately, I was struck by the profound joyousness found in nearly every track. Even songs about grief, pain, and struggle seem to have a positive cast, one of acceptance and hope. Likewise, the songs tend to remain uptempo. They lack any traces of the somber traditional pop of Ella Fitzgerald, Billie Holiday or Frank Sinatra. (I won’t offer an explanation for this phenomenon, though undoubtedly an expert could provide a theory.) To further summarize: the tone is rather raw; instrumentation is often stripped-down, with notable exceptions; the performances tend to have a looseness, sometimes containing “mistakes”. But the perceived simplicity of these tunes may cause one to overlook their many nuances; so great are the depth and heart in these songs.

Now where to begin? Listen All Around may well be a deep dive even for music scholars. At nearly 50 songs, hearing the compilation in full is a true commitment. For the listener uninitiated to mid-century African music or those with modern-day attention spans, it may be wise to approach it in chunks. My recommendation: dive in anywhere, travel anywhere else, and you’ll quickly see for yourself if Listen All Around is for you. Below are several tunes with special resonance to me that may act as entry points: 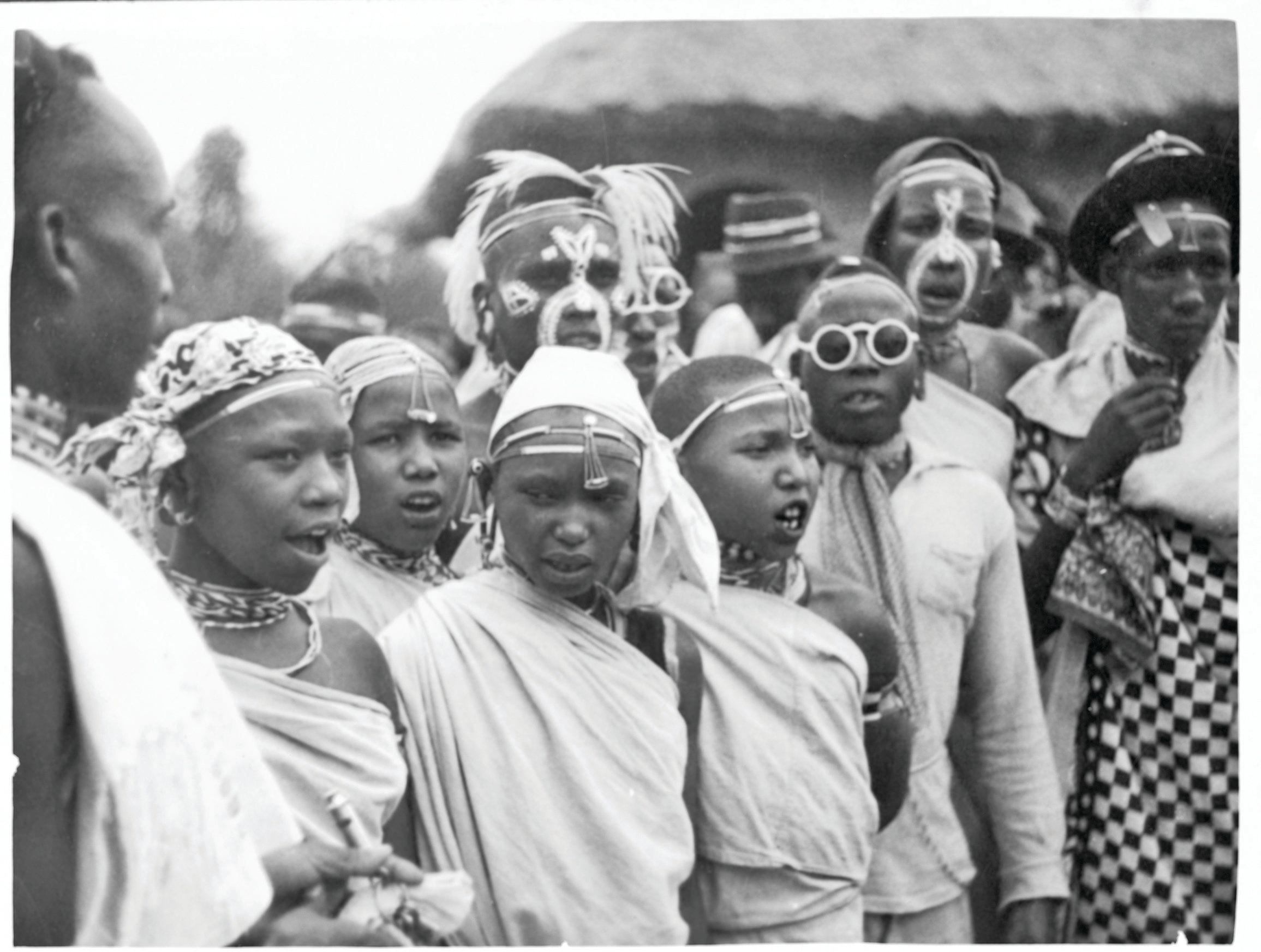 “Mamwana Kufika Munda (My Love Is Upset)”: This Congolese chacha is credited to Ilunga Patrice and Misomba Victor and friends, and features dual open-tuned guitars and a glass bottle. Singing in three different languages, the narrator laments the long absence his lover Rosa, in light of his mother’s death. The main singer holds the tune in the back of his throat, straining slightly, and in this performance lies the magic of the song: a melancholic kind of persistence.

“Gitari na Congo (Guitar of the Congo)”: Bakia Pierre creates a deliciously minimalist folk tune (the only one in the mix), uptempo even for this collection, comprising simply of voice and an alternating, two-note line played on the kunda (a five-string harp). Pierre’s frosty voice gliding around the notes and his off-beat phrasing produce something of uncanny beauty.

“Chemirocha III”: The Kenyan Chemutoi Ketienya and Kipsigis Girls give us perhaps the most striking tune in the collection, adorable yet haunting, in which chepkongo (a six-string lyre) adorns vocal harmonies. The girls create modern folklore, about how they urge legendary Chicago blues artist Jimmy Rogers, here as half-man half-beast, to perform a traditional dance until he jumps out of his clothes. The liner notes reveal the delightful story of Tracey’s encounter with the Kipsigis people during the recording session.

“Marie Wabolingo (Marie, My Love)”: Congolese artists Samuel Colon and Baninga Baye create a dense and boisterous wall-of-sound. Brimming with brass, woodwinds, and percussion whose many sounds seem to fall where they may. While still upbeat, the song is notably more solemn than the majority of these tracks.

Tracey received some criticism for forging what are “supposedly ‘traditional’ performances, shortening the length of songs to fit onto his tape and manipulating the position of his microphone to record what instruments he thought were most appealing”. We may never know what transpired inside the walls of those makeshift recording studios, but it’s worth considering the potential conflicts between Tracey’s roles of an archivist who preserves and of a producer who entertains. No doubt Tracey’s work sprung from historical and artistic urges, but also from a capitalistic urge: the need to commodify, to create a living record and to proliferate the product.

Regardless, Tracey deserves credit not only for perseverance and ingenuity but also for what seems the intentions of someone with a genuine open-mindedness and passion for music (even if he wants to “get[s] back to the bush”). Tracey’s chain influence is far-reaching, seen in the libraries of music lovers and in the work of musicians around the globe who received special access to a new world of sound.

I’d like to say, this has been perhaps the most challenging review of my career. My prior exposure to African music was slight, and to critique a compilation means not only considering its contents but also the work as a whole—its conciseness, completeness, and success in realizing its intentions. Lucky for me, it’s rather obvious that the compilation succeeds in all these ways. If you consider Listen All Around to be redundant, look at the multitude of rock ‘n’ roll or ’60s psych compilations out there. Then reconsider. This compilation tactfully condenses the music of numerous cultural and national identities into a meager two hours. It’s worth your time.

Listen All Around: The Golden Age of Central and East African Music was released June 15 by Dust-to-Digital on a two-CD set, including an 84-page book, in partnership with Tracey’s International Library of African Music (ILAM). 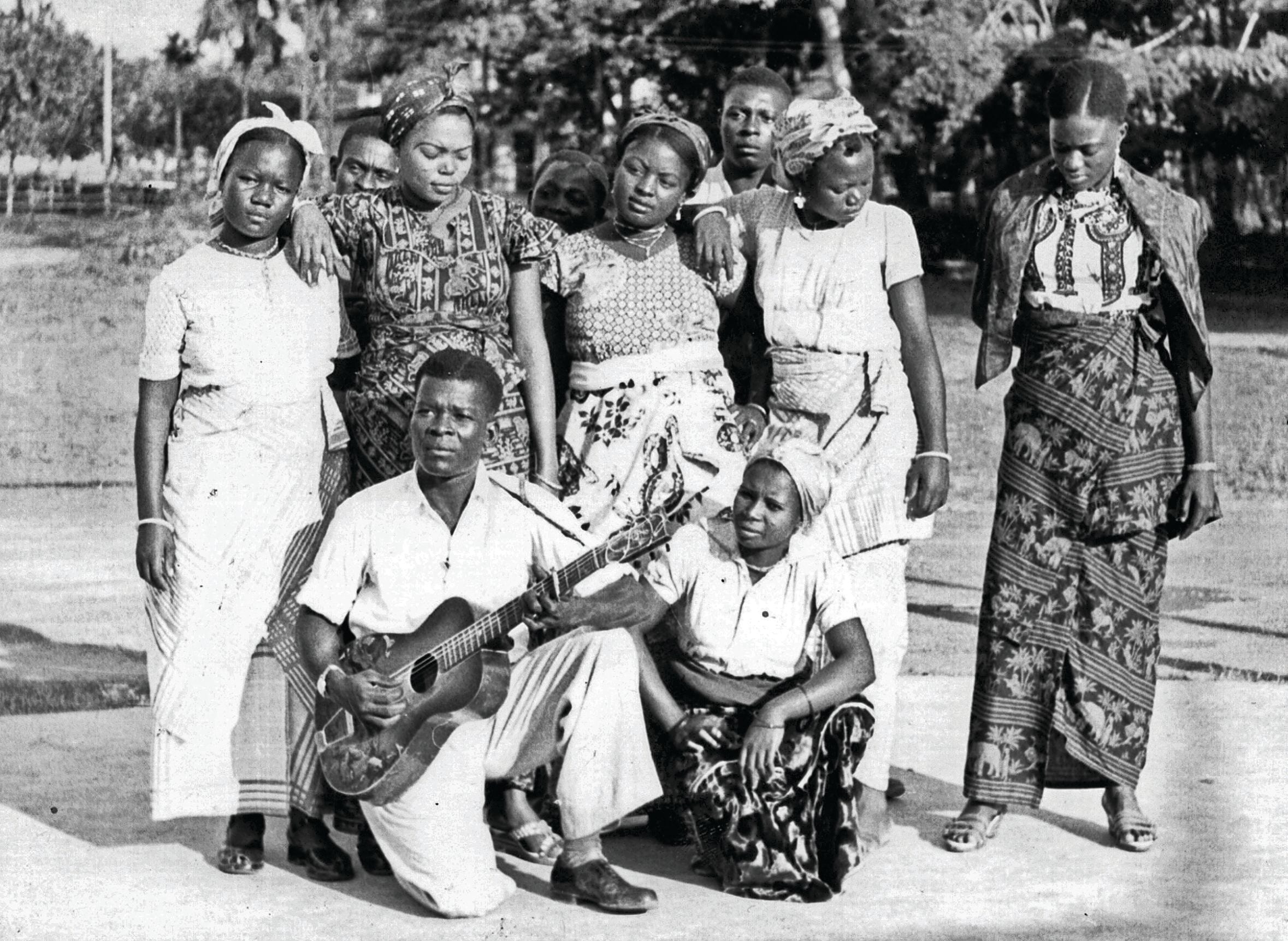