Where: Olympiastadion and Olympiapark, Berlin, Germany

It’s been 27 years since Jane’s Addiction’s Perry Farrell thought of a cunning and original way to say goodbye to touring – by throwing a party on his own terms in the form of a music festival. Lollapalooza instantly became a success, launching the Alternative Nation concept and with it advancing the careers of countless acts, Nine Inch Nails and Ice Cube included. What happened since its history best studied through the many well-documented stories about 1990s rock and metal music. Fast forward to the mid 2010s and Lollapalooza is the largest music festival franchise in the world, with editions in Argentina, Brazil, Chile, France and, since 2019, Sweden. In the past four years, the eye of this global whirlwind of monumental live music events, has been Berlin, Lollapalooza Berlin being Europe’s first event of its kind. Moreover, it took under five years to make it a legendary event across the continent.

Not unlike Madrid’s outstanding Mad Cool (founded just three years ago), Lollapalooza Berlinhas also been a knockout hitter from the get-go. In the past three years the festival hosted Muse, Radiohead, Kings of Leon, Foo Fighters, Macklemore and Ryan Lewis, Mumford and Sons, and dozens of other prominent rock, pop, hip-hop, and electro acts. With the crowds expected to surpass 70,000 visitors per day, the event has quickly grown from “large” to “monumental”.

The reasons for Lollapalooza Berlin’s success are many. For one, Berlin is among the most compelling and affordable metropolises worldwide, a city of uniquely diverse culture and history and a fantastic destination for a vacation of any length – not to mention how affordable it is compared to most prominent cities. Secondly, the festival itself is held in the city, never more than 30 minutes away by public transportation from the center, which means a lot to casual festival-goers, not too enthusiastic about camping in the wild for days or spending their entire vacations unable to do anything except attend an event.

The tickets are affordable, starting at €129 for the weekend, and with a daily ticket, for €79 visitors get at least half a dozen great shows at the price of one. And the lineup is always exquisite; the event is dedicated to hosting an eclectic assortment of performers and 2018 is no exception. The Weeknd’s only festival appearance in Europe this summer will take place at Lollapalooza Berlin; the same can be said for the National, who will only play this single date in Berlin prior to moving on to the U.S. for the finale of their Sleep Well Beast tour, while Kraftwerk will wrap up their spectacular 3D Tour here. 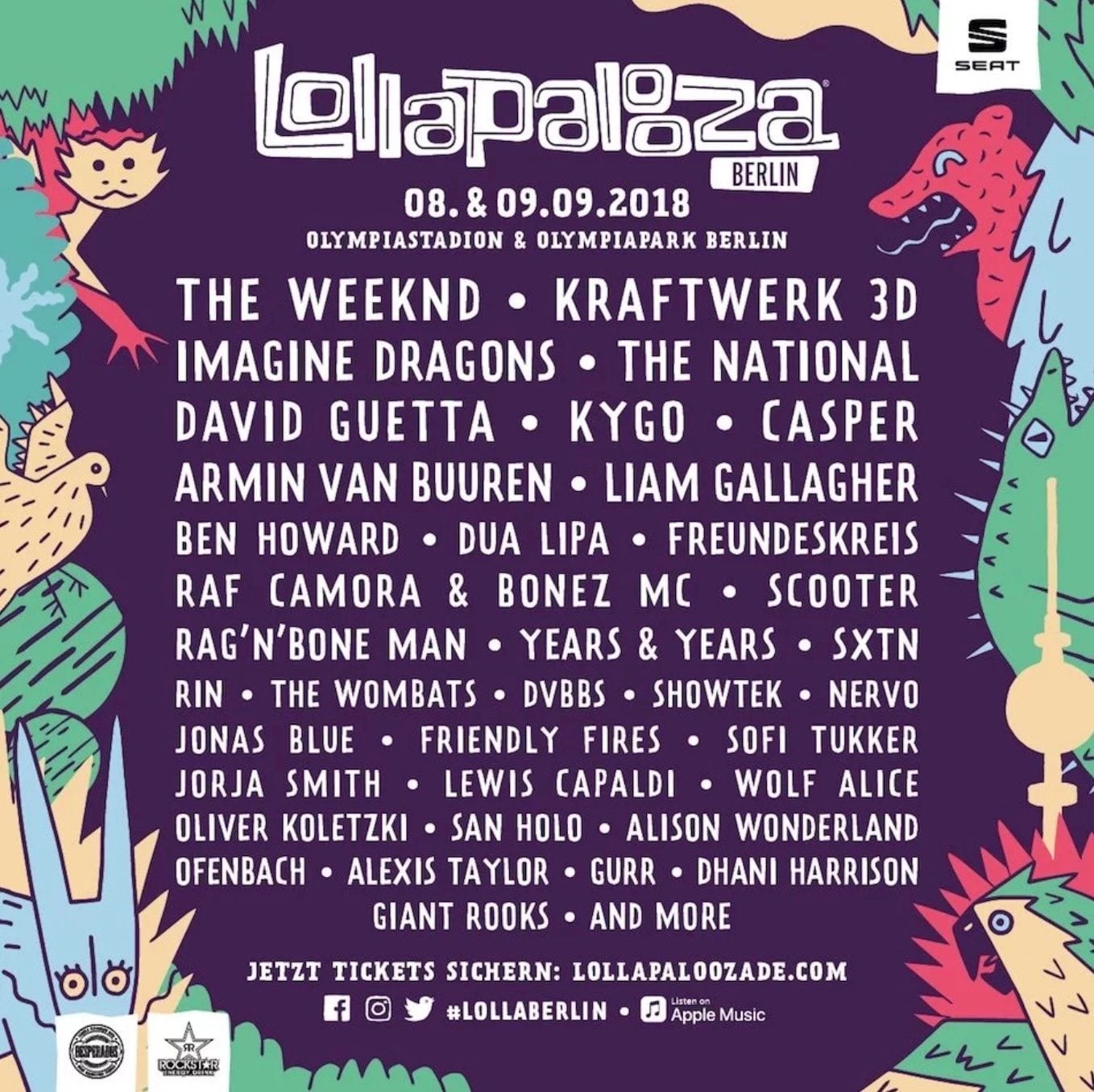 Moreover, Lollapalooza guarantees a good time – the 2016 edition was spectacular and had set the tone for the expansion and growth that has just begun. Though it’s still among the youngest large music events in Europe, today Lollapalooza is already mature in terms of its entertainment and educational content, especially regarding the efforts to clean the environment and work toward tolerance and pacifism (Farrell’s vision for the event since inception). Except for the music, visitors will have the opportunity to learn about sustainable projects, innovations and ideas at Der Grüne Kiez (The Green Neighbourhood) section, unwind at the Lollapalooza Fun Fair where more than 200 artists, acrobats and performers from all over the world will host one gigantic carnival throughout each of the festival days, or even obtain new statement pieces from the fashion market at the Fashionpalooza area. As always, Lollapalooza keeps presenting itself as a family-friendly festival, with Kidzapalooza, the section dedicated to providing amusement for children of all ages, inviting families to join in on the fun and not leave their little ones behind. Children under the age of 10 can come to the festival free of charge.

Still, with great popularity come great challenges, and given such a massive event is held in the city, logistical issues are expected – and occur, every year. In its fourth year, Lollapalooza Berlin is moving for the fourth time; the first three editions were held at Tempelhofer Feld, the Treptower Park, and Hoppergarten, on the outskirts of the city. Each time the communities nearby protest the noise and complain about the event, any event, being held in their vicinity. This time around, festival Boss Fruzsina Szep (of Sziget fame) seems content – looks like she has finally found the right venue for such an immense and still growing happening. “Lollapalooza is an inner-city festival, it belongs to Berlin,” she said in an interview for the Berliner Zeitung. “The festival has changed, it has grown. As it is now geared, it only fits in with Berlin.”

And now that the organizers have secured the venue for at least two years (the event will certainly be held at the Olympiapark again in 2019), soon the 5,000 personnel working at Lolla Berlin will swarm at the premises, ensuring the event is as seamless as possible. Shouldn’t be a problem this time around, with the curfew set for 11 pm and 10 pm on two days, respectively.