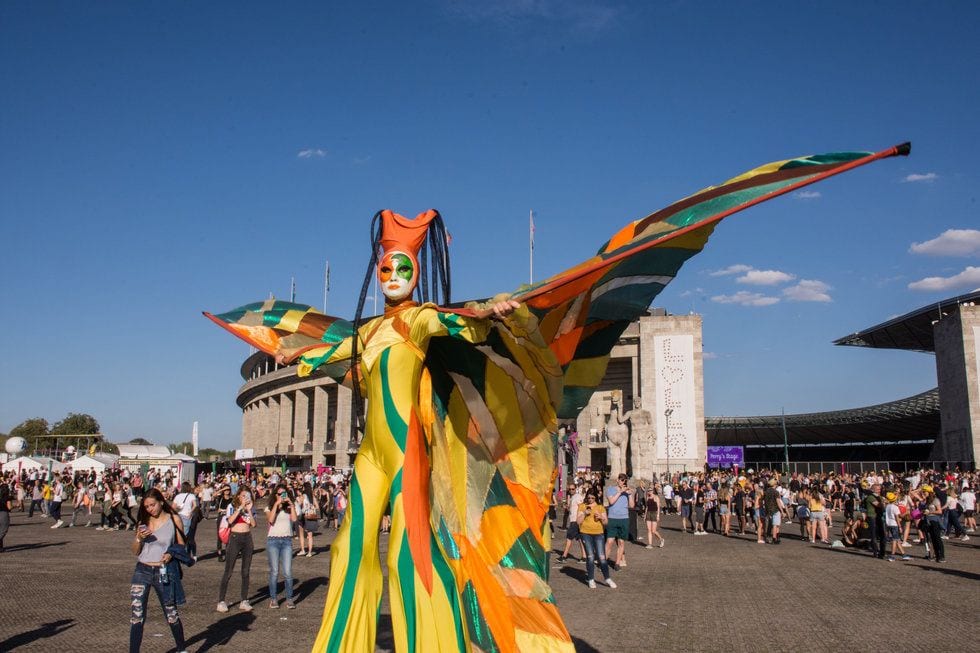 After a powerful first day, which saw an extraordinary performance by the Weeknd, an explosive dance party by David Guetta and several other great pop shows, on Sunday, Lollapalooza Berlin started even earlier to accommodate as many performers as possible before the 10:00 pm curfew. What was supposed to be a mellow, late-summer day proved a scorching afternoon across the windless plains of Berlin’s Olympiapark. Though we arrive around 3:00 pm, we barely make it in time to catch a heartfelt and hugely entertaining concert by Dua Lipa in front of a massive crowd of about 40,000. At first glance, one might think the decision to put such a prominent pop star so early was a poorly made one, but the opposite proved to be true. By putting on acts such as Rag’n’Bone Man and Dua Lipa in the early afternoon, the organizers secured a large crowd at the festival early on and set the right tone for the rest of the day.

It’s impossible to follow Dua Lipa’s galloping career without noticing just how much she improves as a performer one show after another. In her first year of substantial touring (her concert at this year’s Sziget was the first headlining performance of her career), the 23-year-old pop sensation has trodden the challenging path of stardom and has grown, from a shy girl moving self-consciously at the back of the stage, into a confident and outspoken ruler of her space and talent. This was the third time I’ve seen Lipa perform this summer and each time she was better than the last; this Sunday, during what was her last European tour date this year, she’s fully come into her own. 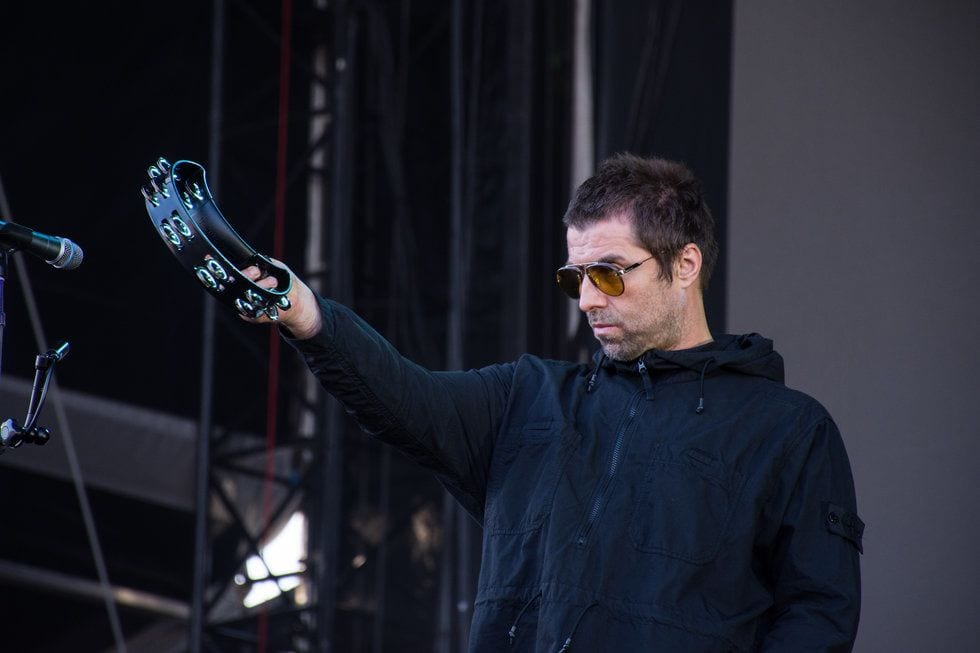 As soon as Lipa gets onstage, thousands start rushing across the field to get a better look. In comfortable striped sweatpants combined with a revealing miniature top, she moves like a pro, supporting her dance troupe effortlessly throughout the show. The 45-minute show begins with “Blow Your Mind (Mwah)” and the large crowd is instantly hooked, cheering to Lipa’s every word. With no trouble singing while dancing (an insurmountable obstacle for most pop singers), Lipa demonstrates another rare talent – the ability to make her otherwise dark mezzo soprano sound cute in order to blend in better with her playful songs, making her panache that much more alluring as a result. Midway through the show, a fan in the front row passes out, and Lipa stops the show until she is sure everything is all right, adding that she feels uncomfortable performing while someone in front of her needs medical assistance. “Be safe, take care of one another,” she says as the paramedics ensure the girl on the stretcher receives treatment.

The brief gig is filled with great summer pop hits and while the syrupy tunes may at times sound like childish fun, Lipa has already outgrown her image as a teen star. An outspoken feminist, speaking out against sexism and delivering some of the more potent female empowerment anthems for young women, she is already a star in her own right and an inspiration to many. The big finale is reserved precisely for the two feminist hymns, “IDGAF” and “New Rules”. She raises her middle finger in the air as she sends the message to young females to “blow off the fuckboys messing with them”. The crowd promptly responds with cheering. Just because she’s young doesn’t mean she’s not right. It’s great fun to watch her perform.

Elsewhere, on the Alternative Stage, Friendly Fires are at it in front of before what amounts to barely 300 people or so. The English indie rockers are in great spirits and Ed Macfarlane ardently glissades around the stage, trying his best to amuse the small crowd, but few are impressed. The band does sound as poppy and feisty as ever, “Kiss of Life” being a missed opportunity for a grand finale singalong. Speaking of missed opportunities and pitifully small crowds, the letdown of the weekend was Liam Gallagher’s attempt at reviving the fame of Oasis. The frontman and gob-in-charge of what was one of the most iconic bands of the late 20th century put on a show that sounded like an Oasis tribute band, trying to reach the young and painfully uninterested audiences with his recognizable sneering vocals and futile attempt at resuscitating hits which younger audiences (regrettably) don’t even recognize. 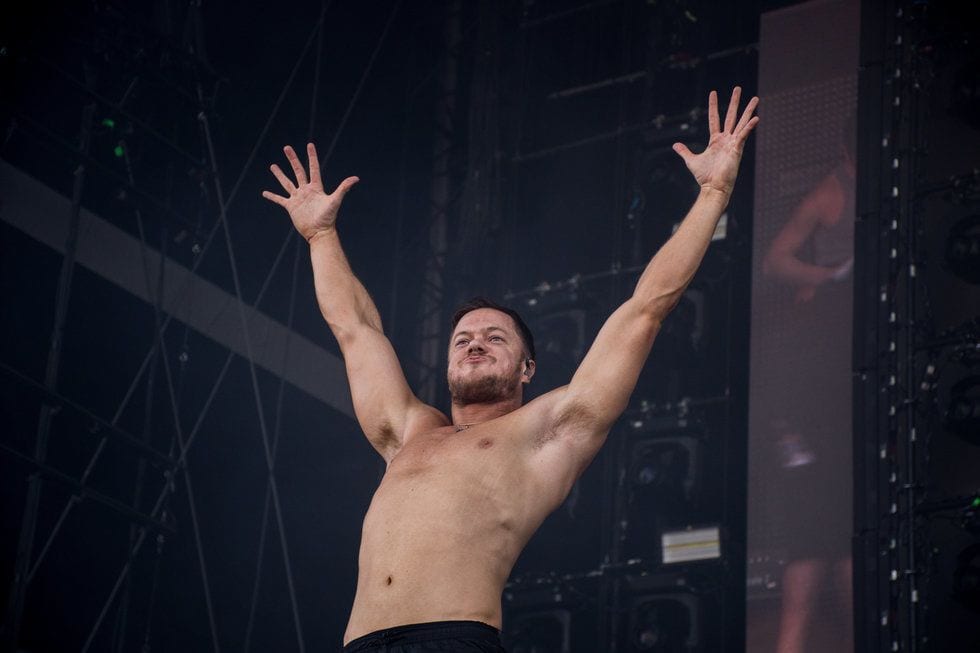 Gallagher is more than young enough to develop his own career and step out of the shadow of his big brother; alas, he has too little musical prowess to succeed in such endeavors, and seems uninspired from the get-go. As a result, most of what we see fails to resonate creatively with an already apathetic crowd of barely 5,000. Even after swearing that he would never perform Oasis songs which he did not write, nine out of 14 of Gallagher’s tunes are exactly that. After a playback of the Manchester City Champions chant and “Fuckin’ in the Bushes”, Gallagher appears, in his trademark windbreaker, hands on his back. The first two songs are “Rock’n’Roll Star” and “Morning Glory” and it’s depressing to see that, save for a couple of thousand people around the stage, the many festival goers who were traversing the site throughout the show, had little clue as to the anthemic nature of those songs.

By the time the dispirited show ends, there are far more people at Main Stage 1, awaiting the Imagine Dragons show, than there are listening to “Supersonic” or “Live Forever”. Gallagher dedicates, somewhat thoughtlessly, “Cigarettes and Alcohol”, to the younger generations at the festival, but there’s nothing he can do to save the day and he leaves the stage with a curt “thank you”, not sticking around to sing “Wonderwall” at the end. It’s for the best, as it would be heartbreaking to hear such as song without a colossal singalong. Too bad Gallagher spent so many years unnecessarily dissing Damon Albarn, instead of taking notes on how to evolve a career worth paying attention to.

On a brighter note, merely minutes after the fiasco, a shirtless Dan Reynolds runs in front of a crowd of over 30,000 carrying a rainbow flag and exclaiming, “This is a safe space, you are free to be yourself,” as the second most famous band to come from Las Vegas in this century immediately takes off with “Radioactive”. For all their poppy and campy appeal, Imagine Dragons are an endearing and potent live act, capable of winning over the naysayers while hugely enjoying themselves onstage. The tempo of what Reynolds said was their last show after more than 400 days of touring, never lets up; there is confetti spreading around all the way to the Stadium, and Reynolds keeps the energy on a high level without skipping a beat. Midway through the show, an amusing cover of the Police’s “Every Breath You Take” sees many of the younger onlookers slow-dancing and swinging in unison. We take a short break to run to the food court for a quick dinner before the grand finale.

Speaking of the food court, it’s genuinely as advertised – plenty of delicious world cuisine at reasonable prices. Some of the stands include salmon kebab, wild boar burgers, and delicious, prepared on spot bread filled with ham and cheese; surprisingly for a music festival, all of the food we tried, sweet or savory, was of amazing quality and generous serving sizes. Besides the food court, this time around there are more than enough toilets and sources of fresh water, making it considerably less challenging for the visitors to navigate the premises and ensure their physiological needs don’t cause serious trouble. The non-musical content is fairly sparse, but hugely entertaining: there are costumed dancers, acrobats, the family-friendly Kidzapalooza (there were more children at this festival than at any other I have ever been to), and a street market for up-and-coming artisans. To be fair, not much more can fit beside the six stages, and all the content provided is more than enough to hold your attention over a weekend.

It’s nearly 8:00 pm and dozens of volunteers in green vests are handing out 3D glasses. It’s time for Kraftwerk to remind us why they are considered one of the most influential pop groups in history. At 8:00 pm sharp, Ralf Hütter, Fritz Hilpert, Henning Schmitz, and Falk Grieffenhagen step up to their identical consoles against a gigantic backdrop lit up with minimalistic, Bauhaus imagery of cross-functional shapes and soundwaves. As usual, in their dark bodysuits they are almost still throughout the show, appearing as though they may be solving Sudoku puzzles. And what a show it is. Hard to believe it has been 48 years since Kraftwerk defined modern pop and electro music: even today, with live version of their timeless hits such as “Man Machine” and “Radioactivity” amped up and made far more layered, they sound as relevant as ever.

By abandoning their often minimalistic approach to soundscaping and sampling for a more nuanced and aggressive arrangements live, these four men could not only hold their own against any electronic music composer working today, but would probably blow most of them out of the water. Such is the power of Kraftwerk, who keep innovating even after nearly half a century. In line with their ambiguous narratives about machines, technological advancements and the automatization of the civilization, the highpoint of the show arrives some 15 minutes before the end, when the band abandons the stage so that life-size, moving robot replicas can take their place.

Whichever angle one chooses to work, Kraftwerk’s 100-minute 3D show is an undeniable triumph, with countless teenagers in the crowd dancing tirelessly, eager to know where all their Spotify recommendations originate from. While nearly all bands in history either ceased to exist, or at least ceased to innovate 50 years in, Hütter and friends show no intention of abandoning the scene they almost single handedly set up. And we are all the richer for this decision.

At the Olympiastadion, Kygo is the act with which to bid goodbye to this year’s edition of Lolla Berlin. The Norwegian DJ extraordinaire is in his element, playing a medley of his hits back-to-back to a hypnotized crowd. Though there were less people than at the David Guetta show on Saturday, the stadium is still all but full, crowds chanting to every one of his numerous feelgood hits of the summer joyously. At one point, Kygo dedicates a cover of “Without You” to the late Avicii, a tender moment to remember one of the big stars of the genre, gone too soon. With fireworks and in high spirits, Kygo signs off at 10:00 pm exactly, and the crowds start pushing toward the exit. Though it’s not late, the festival has been going on for nearly 12 hours and we are exhausted. All in all, this year, Lolla Berlin seems to have finally found a home for itself, in what can be called the first well-organized edition of an otherwise great festival. We are greatly looking forward to receiving the news about the 2019 edition, hopefully again at the Olympiapark.