After an incredible first day of Madrid’s largest open-air festival, one couldn’t possibly expect more yet here we are, in blistering heat again, thirsty for more. First things first: Mad Cool is going through some logistical issues. The first day saw thousands of the 80,000-strong crowd (this reporter included) wait for over an hour (two hours even) in sizzling heat just to be granted access to the festival premises. Certainly this is an inconvenience, especially if one takes into account that the congestion happened because thousands of people, who all happened to want to show up at the same time, didn’t have wristbands and therefore had to stand in line to obtain them.

Since the festival had sent out wristbands to most paying guests weeks and the press weeks in advance, most of us could have gone in without having security stop us at several points along the mile-long path from the subway station to festival premises, however, nobody could ascertain exactly who to let in and who to leave in the line, so all of us suffered as a result. While many people were angry about the waiting, it has to be noted that these are acute growing pains – Mad Cool only started out two years ago and this year, with more than 80,000 in attendance every day, things like this can happen. The organizers truly did everything in their power to prevent the jams; the move to send out the wristbands in advance to the majority of visitors is a commendable one and the second day saw all the issues with access fully resolved.

Nevertheless, something else clouded the atmosphere at the very end of Day 2, more specifically, Massive Attack’s decision to cancel their headlining performance on the spot due to an alleged “sound clash” with Franz Ferdinand, who were playing roughly at the same time on the Madrid te abraza stage. The show was supposed to take place at 1:45 am in the Loop, a hangar of sorts and Mad Cool’s third largest stage, intended for alternative and electronic acts. The venue was completely packed, with more than 25,000 waiting for the show to begin. After about half an hour of stalling without anyone addressing the audience, we decide to go and enjoy Franz Ferdinand’s hugely entertaining slot at the other stage, while most people still wait patiently. It’s not until a full hour later, after the Glaswegian kings are done, that a brief message of cancellation appears on screen, with people screaming deafeningly, hurling insults at both the band and festival management. 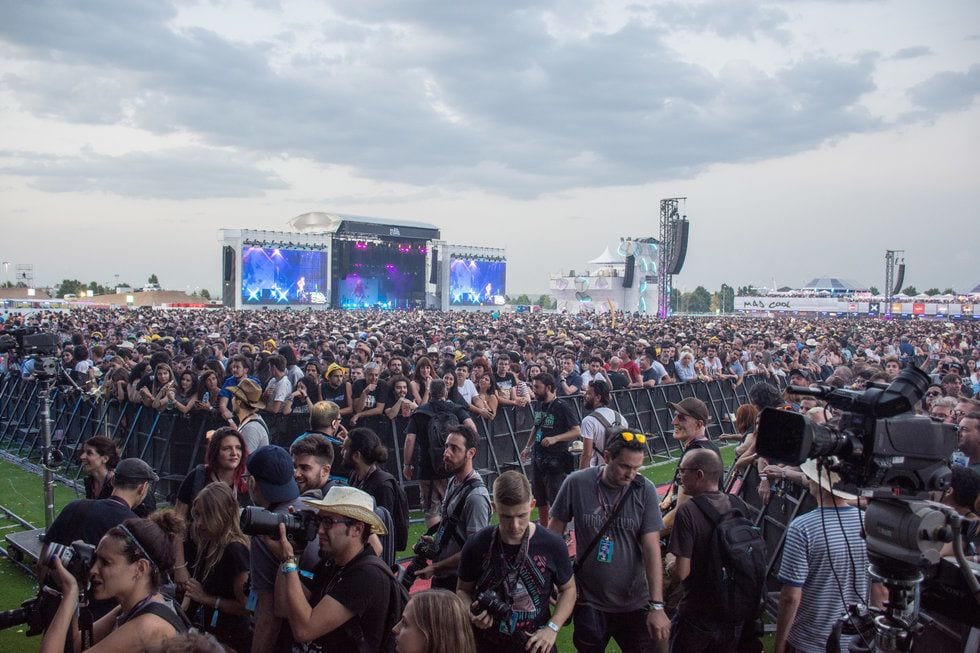 Their anger is appropriate, if somewhat misplaced – as it turns out, the band cancelled on spot because they “couldn’t perform” due to “the noise” coming from another stage. While it would have been desirable for the organizers to have said something sooner, it needs to be said, and clearly – this is 100% the band’s fault, a massively shameful display and blatant humiliation of their fans. Beside all the other bands not having any trouble whatsoever performing in the Loop, with several other performances taking place concurrently, I can say with certainty that Franz Ferdinand’s performance was inaudible, or at best barely audible, on the inside. We’ve spent quite some time on the inside, and in the front row for this specific show, and one could not hear anything save for intermittent pangs of bass on the outside to save their life.

Massive Attack’s decision to unilaterally cancel their show without any explanation and not even show their faces to notify the thousands of eager people that they would be stepping down because of something that can only be described as an embarrassing whim, is nothing short of atrocious. People waited until 3:00 am, exhausted and in need of fresh air, while Robert Del Naja comfortably evaded them. The management should have spoken sooner, yes, but perhaps they couldn’t, perhaps they were begging the band to change their minds – after all, the roadies hadn’t packed their equipment until much, much later. While I’m unsure of whether we will ever know the truth, the fact of the matter is that thousands, many of whom came to the festival specifically to hear them live, were abandoned and humiliated by the band, left waiting and missing out on a great performance by a less demanding bunch. The alleged “sound issues” were all but nonexistent, and Massive Attack didn’t even bother to apologize for what they did. In the end it doesn’t even matter, we’re awfully ashamed of Del Naja’s and Grant Marshall’s behavior.

But enough about the unpleasant moments when there were countless brilliant ones. Despite our best effort, we’re a bit too late to see At the Drive In on the Madrid te abraza stage; still, right around the corner, James Bay struts in front of thousands of screaming (predominantly female) fans, sporting fashionable leopard sunglasses and “I woke up like this” attitude. The 27-year-old singer-songwriter immediately demonstrates why he was awarded the Critics’ Choice and Best Male Solo Artist awards at the Brits. His music is catchy and joyous, pop-rock with a pinch of folk, ideal for a late afternoon at the festival, but his vocals are something to marvel at. Bay knows this well, as he roars throughout “Wanderlust”, “Just For Tonight”, and several singles, of which “Best Fake Smile” invites a frenzied singalong, thousands jumping up and down with joy. The encore is equally jubilant, and Bay closes with a spectacular rendition of Tina Turner’s “The Best”, and a compelling, longing version of “Hold Back the River”.

Elsewhere, Gary Lightbody and his merry bunch of Northern Irish post-Britpop pundits, are seducing another large crowd, counting tens of thousands of people easily. While the people aren’t particularly kinetic, they react reasonably well to Snow Patrol’s combination of gentle vocals and indie rock. The band plays just 13 tunes, and though they are promoting their latest release, Wildness, only three tracks from the album are performed. The rest of the setlist is picked out well, “Run”, “Open Your Eyes”, and “Shut Your Eyes” being the clear fan-favorites before “Chasing Cars” gets hundreds of youngsters running from the other stages toward the Mad Cool stage, spreading their arms and singing along to Lightbody’s ever-moving performance.

Merely minutes pass and before we’ve had the time to take a toilet break or seek out an exorbitantly pricey beer, a 10-minute countdown lights up the screens on the Madrid te abraza stage. Again, tens of thousands gather to form an impenetrable, thick crowd, and Jack White appears, immediately launching into “Black Math”, a White Stripes song. The Nashville musical polymath instantly dazzles many a present rock lover, spanning his entire fertile over 20 songs and 90 minutes. White is tall, commanding and utterly committed to his music, making very little contact with the audience but commanding the rock show with unique virtuosity.

Be it the songs off his third solo album, Boarding House Reach, “I Cut Like the Buffalo” by the Dead Weather, “Steady As She Goes” by the Racounteurs, or any one of the nine White Stripes hits and obscure fan-favorites alike, White delivers a triumphant show throughout, astonishing several generations of music aficionados. His uncompromising amalgamation of rock, blues, country and even jazz, is never short of original, his talents best recognized with an eclectic set. “Hotel Yorba” is an especially sweet moment for the vintage White Stripes fans, though of course, it’s “The Hardest Button to Button” and “Seven Nation Army” that really soar, as always, leaving a massive crowd breathless and mumbling the bass line to the latter for minutes after the concert is done. 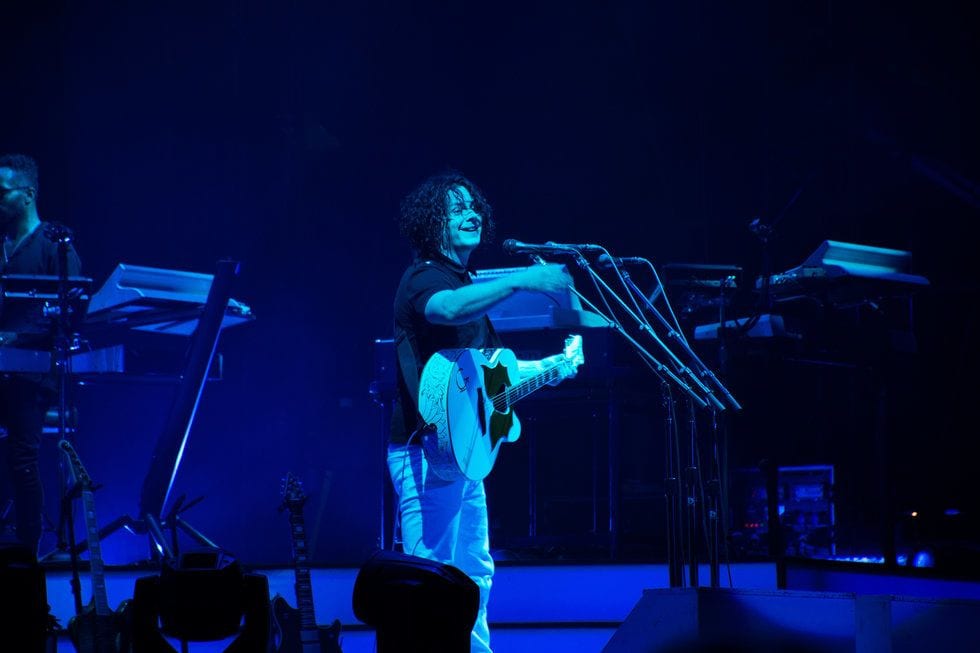 If I said that a full-capacity attendance of about 80,000 seen at the Pearl Jam performance last night was the most crowded this festival could be, I stand corrected and cemented to the spot, since the mass at the Arctic Monkeys show was something else. The Mad Cool stage was so packed with a noticeably younger and more eager audience than the previous night; it was difficult to find the room to breathe, let alone to sing and dance. It’s close to midnight, and a slender figure in an oversized suit jacket and burgundy trousers with sequins on the sides emerges from the darkness, languidly lifting two fingers for peace and failing to take off yellow pilot shades. His hair is fairly lengthy and greased up, his neck heavy with a chain around it, his shirt, of course, heavily unbuttoned. This young man is Alex Turner reinvented, revamped, and simply older than the boy in the corner, the one you wished had talked more in class since he always looked like he had a lot to say. 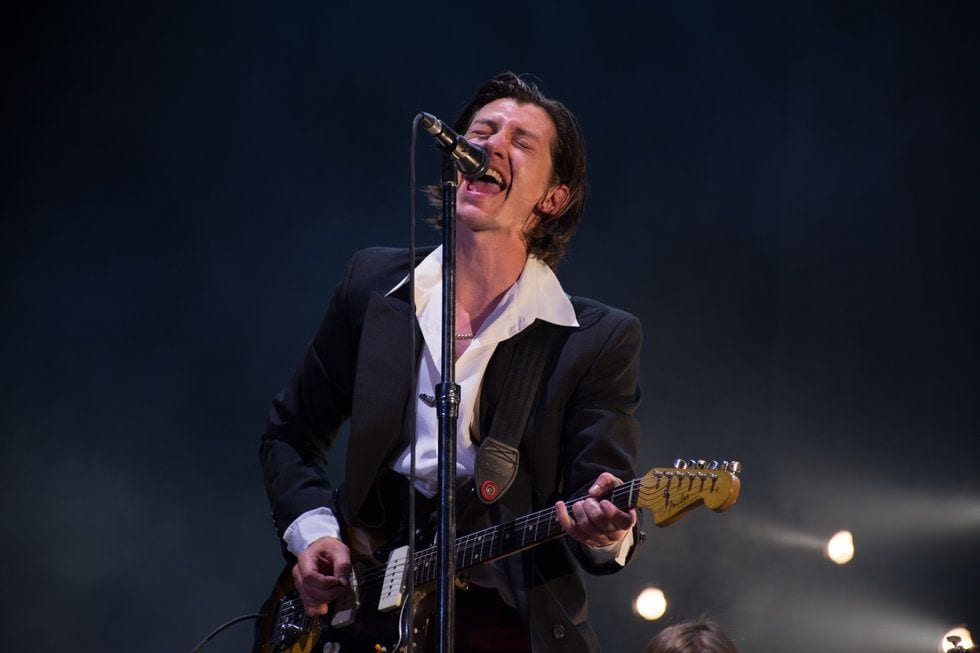 Turner may sell himself as a changed man, and the persona meshes well enough with his band’s new release, the controversial yet beautiful Tranquility Base Hotel & Casino, but beneath the surface he is the same old withdrawn, loveable wallflower we grow up with, the only man able to incorporate words and phrases such as “information-action ratio” and “warp speed chic” in songs casually and be able to get away with it unscathed. However, some things indeed have changed – for one, Turner is now an incomparably better singer, the faux-chanson delivery sitting well with his uniquely compelling tone of voice. The band is also more mature, their old song arrangements reworked with keyboards and more guitar layers added to blend in with the new material better. 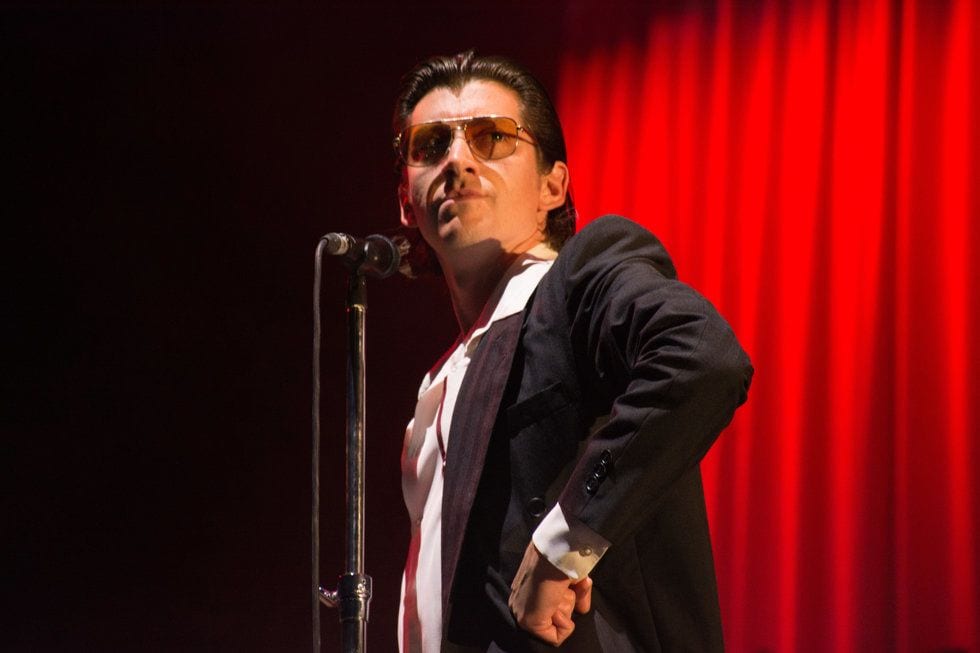 Indeed, the songs off of the new album are as well received as the old hits, though one cannot help but notice the majority of the crowd chatting throughout the intense 90-minute show, seemingly disinterested in the performance itself. It begs to be said that Arctic Monkeys have now become one of “those bands”, the band everyone has to witness just to say they were there, regardless of whether for them the lyrics to “Do Me a Favour” or “505” hit close to home. The setlist is balanced and even though it’s the songs from AM that instantly get things to the boiling point as far as the eye can see, a brilliant surprise in the form of “From the Ritz to the Rubble” proves that indeed, many Brits took a vacation in Spain this summer, the singalong effortlessly carrying over to “Pretty Visitors”. All the while Turner is developing his persona of a C-film narrator with varying success – he is too kind-hearted to be a scummy man, too earnest to really be a provocateur, and too intelligent for the role he took on, but let him have it. This unbelievably talented young man continuously writes some of the best lyrics we have ever heard and he is entitled to try out – and try on – new things. Soon enough we’ll know which persona will stick, anyway.

After the Massive Attack fiasco, the night ends with a funky, ridiculously entertaining set from another Alex the Showman, and his band, Franz Ferdinand. Kapranos is on top form as he struts on the stage, casually chatting with the audience and seducing the youngsters at the front. The 14-song set is hits only, and the crowds are laughing their hearts out, dancing to every fiery tune, most of which are hits from their oldest releases.

Certainly, a lot more can be seen at Mad Cool or said about the festival, but the program is so packed, so intense, that at 3:00 am we are completely spent and head back for some much-needed rest. The third day will have us take on QOTSA, Depeche Mode, and Nine Inch Nails back-to-back, so one must be prepared.