The Man Who Killed Hitler and Then The Bigfoot
Robert D. Krzykowski
Sparky Pictures

Every now and again a film comes along whose pre-publicity manages to provoke preconceptions that turn out to be completely wrong. For example, early reports on Richard Kelly’s Donnie Darko (2001), along with the ubiquitous shots of Frank (James Duval) in his bunny costume, served to give the impression that the film was going to be some kind of gonzoid mind-melter. As it turned out, it was a finely crafted and emotionally charged coming of age-cum-family drama that managed to neatly present well-observed character studies alongside its more outré sci-fi and time travel content.

So while the events promised in its title are indeed enacted onscreen, they – like the rest of the movie’s quite varied but substantial content – are presented in completely sober and thought provoking ways.
Donnie Darko‘s stranger aspects were ultimately devices that served in the end to tell us much about Donnie (Jake Gyllenhaal) himself and the same is true of The Man Who Killed Hitler and Then The Bigfoot‘s stranger aspects too. The encounter with Hitler and its aftermath, much like the encounter with the Bigfoot and its aftermath, really serve to show us just what kind of a man the show’s protagonist, Calvin Barr (Sam Elliott / Aidan Turner), really is.

Ultimately, another commonality that both films share is the narrative device that requires an emotionally isolated individual (one with his whole life ahead of him in Donnie’s case and one with the bulk of his life already behind him in the case of Barr) to risk their very existence in order to save a world that has seemingly done them few favours. 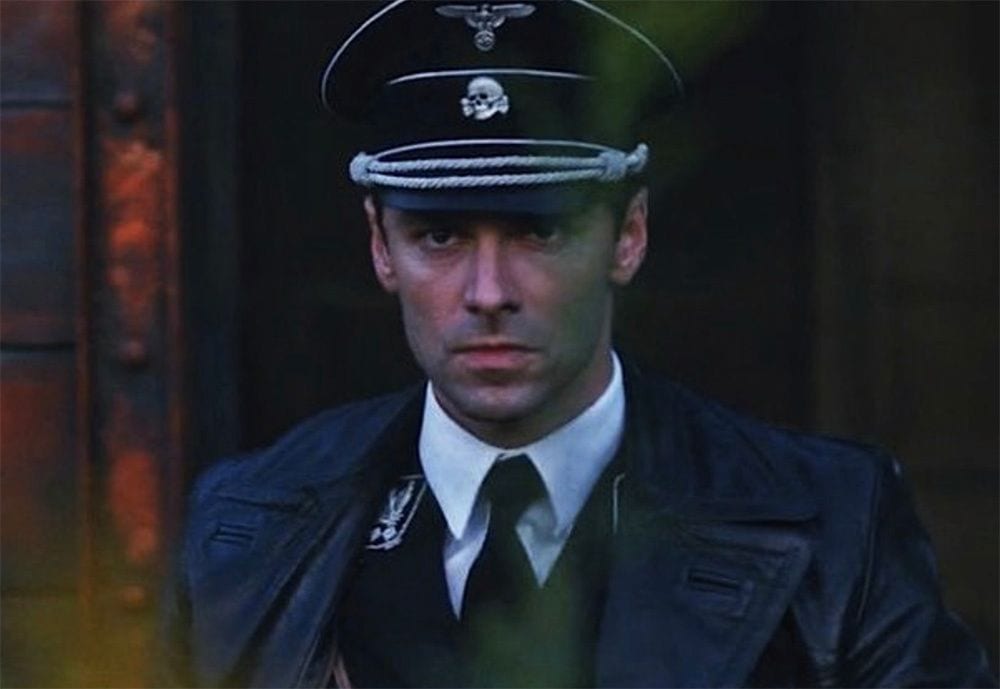 The film opens with an elderly Barr (Sam Elliott) drinking alone in an empty bar, with the bartender presented as being the closest thing that he has to a friend or a regular contact. Barr oozes loneliness, melancholia, world-weariness and a sense of regret from the outset and this is underscored by the lyrics of a rock song that’s blasting out of the bar’s jukebox. A series of flashbacks subsequently reveal why Barr feels and acts the way he does. During World War II, a young Barr (Aidan Turner) was assigned a mission to assassinate Adolf Hitler. He succeeded but the subsequent installation of lookalike stand-ins by the Nazi high command and the Allies’ decision to cover up the incident meant that the Führer’s demise went unnoticed by the wider world and Barr’s work failed to change the course of the war and history as we know it.

But taking the mission did have a huge effect on the most important relationship of his life — his budding romance with a local schoolteacher, Maxine (Caitlin FitzGerald). Barr has never gotten over losing Maxine and he appears to be just listlessly wishing his life away when his former paymasters turn up and offer him the mission to track down and kill the Bigfoot. Radio and newspaper reports have been carrying stories about a string of strange murders in Canada but the truth is that the Bigfoot is inadvertently responsible for the deaths. The beast is actually carrying a deadly virus that threatens the existence of every living creature on earth. Barr, as luck would have it, is both fully qualified for the mission and one of the few men on the planet who is immune to the virus. Our reluctant hero thus sets out to try and save the world for a second time.

Barr’s insistent flashbacks play an important role here. Presented as non-linear episodes that detail different aspects of Barr’s back-story, they are generally initiated using hard cuts but shots of significant objects (a whisky glass, a set of cutlery laid out for dinner and so on) and actions (a glance towards a familiar shop window) are employed to create match-cuts that ease the transition from present to past. The film’s recreations of small town America directly before, during, and after World War II are rendered very well by the use of good costuming, sets and music, as are its depictions of Nazi occupied Europe. There seems to have been less of a desire to nail down a truly ’80s vibe for the scenes that are set in the film’s present day (1987). Maybe the most obvious trends of decades like the ’80s simply bypassed Barr’s small town or maybe Barr – whose point of view relays the content of the film’s diegetic world – is too withdrawn and disinterested to notice them. There’s also some great scenery and expansive cinematography to enjoy when Barr heads to Canada and enters the Bigfoot’s wilderness domain.

The scenes that detail Barr’s day-to-day life provoke a wide range of emotional responses. Much of the time the boredom, the routine nature, and the tribulations of old age are captured in gentle and un-rushed observational character studies: Barr taking his medication despite not wanting to (he eventually does stop taking it); Barr staring at an unappetising TV dinner-cum-ready meal; Barr reading or listlessly sitting in front of his TV before falling asleep in his armchair; Barr interacting with or walking his faithful dog Ralph; Barr rubbing his aching bones and so on. Other episodes – like Barr’s desire to reunite a discarded winning lottery scratch card, and its $100 prize, with its rightful owner – serve to further confirm his integrity and the strong moral codes that guide his every action. Indeed, as we later discover, Barr may be trained to fight and kill but he is not a natural born killer and he cannot find it within himself to condone violence and bloodshed.

Barr’s relationship with his younger brother represents a particularly emotional story strand that runs throughout and it is one of the film’s most pleasing aspects. Ed (Larry Miller) loves Barr dearly and still kind of hero-worships him. He was just a small child when Barr went off to war and returned as a changed man. Thus, he never got to know Barr properly as a brother. All Ed wants is the chance to do the simple brotherly things that he missed out on – such as going fishing together – and for Barr to communicate more openly with him but it seems that Barr is beyond doing such things now. Furthermore, Barr’s melancholy, distracted and withdrawn state has become worrisome for Ed. However, a touchstone from the past that links the two brothers eventually proves that Barr still has strong – if deeply suppressed – brotherly feelings for his younger sibling.

The Man Who Killed Hitler and Then The Bigfoot features some moments of real heartbreak and heartache and these moments work well, thanks to the film’s well-written characters and the sympathetic acting that brings them to life. It seems like Sam Elliott was born to play Barr. The casting is perfect and he turns in an engaging performance. The same goes for Larry Miller in his role as Ed. Aidan Turner also does good work as the slightly bashful and nervous younger Barr seen in the film’s flashbacks. Certainly as far as UK television audiences are concerned, Turner has played two highly popular and iconic screen characters (the vampire Mitchell in Being Human (BBC3, 2008-13) and the eponymous period nobleman in the BBC’s 2015 Poldark) but he soon makes us forget about them as we become invested in young Barr’s story. Caitlin FitzGerald comes on just sweet enough for us to appreciate why Barr loves Maxine so much. Other standout performances include Ron Livingston as the cocksure FBI agent Flag Pin and Rizwan Manji as his softly spoken Canadian counterpart Maple Leaf. The pair works together in order to cajole Barr into taking on the Bigfoot mission.

Robert D. Krzykowski has written an unusual and engaging tale here and he has directed it in a straightforward and technically assured way. The film’s more fantastical subject matter weaves seamlessly in and out of its more mundane and everyday life-based sections, which allows us to suspend disbelief and become invested in Barr’s adventures and accept them as read. The scenes involving the Bigfoot work particularly well since the use of practical special effects means that Barr is interacting with something that is obviously physically present in each film frame. Actor Mark Steger does a great job of emoting the Bigfoot’s anger, pain and anguish – and its physical superiority – when it clashes with Barr.

But the key to the film’s success is perhaps the way that the work of Krzykowski and his cast and crew is able to really stir our emotions (in this regard, Joe Kraemer’s beautiful piano-led music plays an important role). It’s this emotional investment that buoys the film and keeps us interested during the two or three sections where the show’s reflective pace threatens to grind proceedings to a halt and during its somewhat overlong epilogue. It’s noted in the Blu-ray’s extra features that a desire to instill the film with the typical feel of an ’80s Amblin Entertainment production initially resulted in scenes that had more in common with the typically saccharine films that are screened on the Hallmark Channel. While efforts were made to row back on these Hallmark-isms, some element of them does still surface from time to time. So, in spite of its title, The Man Who Killed Hitler and Then The Bigfoot is unlikely to be the strangest film that you’ll watch this year but it will certainly be one of the most interesting.

The picture and sound quality of Sparky Pictures’ Region B Blu-ray release of The Man Who Killed Hitler and Then The Bigfoot are both excellent. The disc’s extra features include an on point audio commentary by Robert D. Krzykowski and a comprehensive ‘making of’ documentary that runs to 40 minutes. Directed by Adam Quiros, this documentary features contributions from most of the film’s key personnel. Nine minutes of deleted scenes offer further insights into Barr’s thoroughly decent nature. Interestingly, the deletion of some of these scenes resulted in the kind of enigmas that are associated with cult movies becoming manifest in the finished film. Elsie Hooper is an innovative and stylish short film – a kind of comic book-like horror-noir made with puppets – directed by Krzykowski in 2016. Composer Joe Kraemer is on hand for a short interview that covers his working relationship with Krzykowski and a gallery of interesting conceptual art relating to the film rounds out the package.