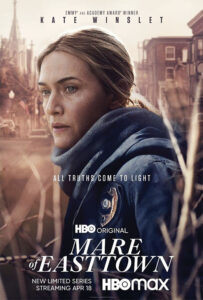 I was in love with HBO’s new hit crime drama, Mare of Easttown, until it went there. I’ve been watching intently as the dazzling Kate Winslet playing Detective Mare Sheehan and Evan Peters, as Detective Colin Zabelboth, investigate the disappearance and murders of several women in the small working-class, fictional town of Easttown. Undoubtedly, there is much to love about this show— the acting is phenomenal, particularly Winslet’s gritty and raw performances. I’ve actually never enjoyed her performances as much as I do on this show. This is a good look for her, and she is not alone; Jean Smart, who plays Helen, Mare’s mother, offers unexpected comedic genius. But, once it happened, I stopped singing praises.

A few episodes in, the pair of sleuths suspect that the murderer they are hunting is targeting sex workers. My stomach sank—murder victim is the only role television seems to have for sex workers. Mare of Easttown is flirting with a dangerous trope with real-world implications for people in the sex industry. In utilizing the “sex worker murder victim trope”, or what others have called the disposable sex worker trope, they are traversing into dangerous territory that crime dramas can’t seem to get enough of, contributing to the normalization of violence and stigma sex workers face.

According to a study by the Sex Workers Project at the Urban Justice Center, “Eighty percent of street-based prostitutes interviewed had experienced or been threatened with violence while working. When asked about reporting violence to the police, they reported that police did not take their complaints seriously and often told them that they should expect violence.” Thus, along with harmful laws criminalizing consensual sex work, our culture creates the conditions under which violence against sex workers becomes normalized and seen as acceptable.

On Mare of Easttown, in episode four, “Poor Sisyphus”, the show’s leads are investigating the murder of Erin McMenamin, a young mother, who we recently learned is hiding the identity of her child’s father, and has suffered much psychological violence from her alcoholic father and physical violence and bullying from peers. Erin was shot, beaten, and dragged to a river, where her naked and fractured body is captured in close detail for viewers.

In an intense scene, the detectives visit Jess Riley (Ruby Cruz), Erin’s best friend, and question her about Erin’s life right before her brutal death. Mare presses Jess—suspecting she knows more than she is letting on. With tears in her eyes and reluctance, Jess shows the cops the online escort page she’d helped Erin to create. In sharing her dead friend’s secret—she explained that Erin was considering work as an escort to pay for her baby’s surgery.

While Mare is in the foreground for most of the scene, the camera does switch to Detective Colin Zabelboth (Evans) and Trisha Riley (Jess’s mother, played by Katie Kreisler) in the background. As Jess talks about Erin’s choice to escort, both Colin and Trisha’s facial and bodily gestures convey judgment, contempt, and disgust. These reactions are typical in crime dramas; police and other witnesses often blatantly display their contempt for sex workers.

Storylines like this could be a springboard to discuss why a child needing a $1,800 surgery can’t get it in one of the wealthiest countries in the world, or why the policies criminalizing sex work and law enforcement contribute to the violence sex workers face. According to the World Health Organization, “Male, female and transgender sex workers may face violence because of the stigma associated with sex work, which in most settings is criminalized, or due to discrimination based on gender, race, HIV status, drug use or other factors.” However, the creators and writers of television crime dramas must assume these data and social issues will not make for good ratings.

Sex workers are treated one of two ways: as punching bags or punchlines. Our lives are almost always sneered at, or pitied, or used as a symbol of inevitable tragedy. If you’ve ever watched police procedurals, or crime dramas, or thrillers, you’ve probably been offered a salacious glimpse of violence enacted on one of our anonymous bodies. Rarely given any agency or backstory as characters, we’re merely used to demonstrate the high-concept murderous impulses of a serial killer, or treated as collateral damage in the mission to save the morally ‘good’ characters.

With several episodes left to conclude the season, it is still unclear if the sex worker murder victim trope will continue to play out or if it the plot will move away from this storyline. Either way, the show has already reproduced enough harmful stereotypes about sex workers. Especially on networks often deemed progressive, writers and producers could do a much better job creating humanizing portraits of sex workers and advancing storylines that are critical of how law enforcement treats sex workers. Current television needs to contextualize the violence that sex workers face as not inherent to the work or the fault of the worker, but as the result of systemic occupational, gender, racial, and class discrimination and policies driven by emotion instead of science. So, to Mare of Easttown and the entire crime-drama genre, sex workers deserve better.