In an article featuring Music’s Sweet 16 of ’16 that named Maren Morris my artist of the year and her Hero the record of the year, there was a reference to entertainers I still needed to see perform live. Guess who topped that wish list? My parenthetical aside to Morris implored: “Add Denver to your first headlining tour, please.”

Well, it took more than two years for this country-pop rocking It Girl to arrive in Denver after the Mile High City was left off her initial headlining itinerary in 2017, but Morris finally made it to the refurbished Fillmore Auditorium on March 18. And Girl: The World Tour exceeded my great expectations.

This ’90s baby has soared from rising star in 2016 to bright, shining superstar status in 2019 (while dodging the sophomore jinx) with GIRL, the March 8 release that’s her second record for Columbia Nashville. It also forms the concert centerpiece for a virtual love letter Morris shares with an adoring audience that croons and swoons along to almost every song.

In an 80-minute show that included a two-song encore and all but one selection from the 14-track GIRL, Morris demonstrated more than the huge voice and spunky personality that broke her out of “The Middle” of the pack of Nashville-based singer-songwriters seeking to become the Next Big Thing.

Emerging from the shadows (a nod to her Hero cover photo?) in an outfit as pearly-white as her electric guitar, and wearing glittery, knee-high boots, Morris started the show with “GIRL,” the title cut and lead single from her new album that debuted at No. 1 on the Billboard country charts the same week that she played in Denver.

Five of the next six songs also came from her new record, the lone exception being a joyful ride with “80s Mercedes” from Hero, her full-length major-label debut. Both cuts elicited enthusiastic singalongs from the crowd, which Morris quickly recognized before grabbing an acoustic guitar and introducing “A Song for Everything”. 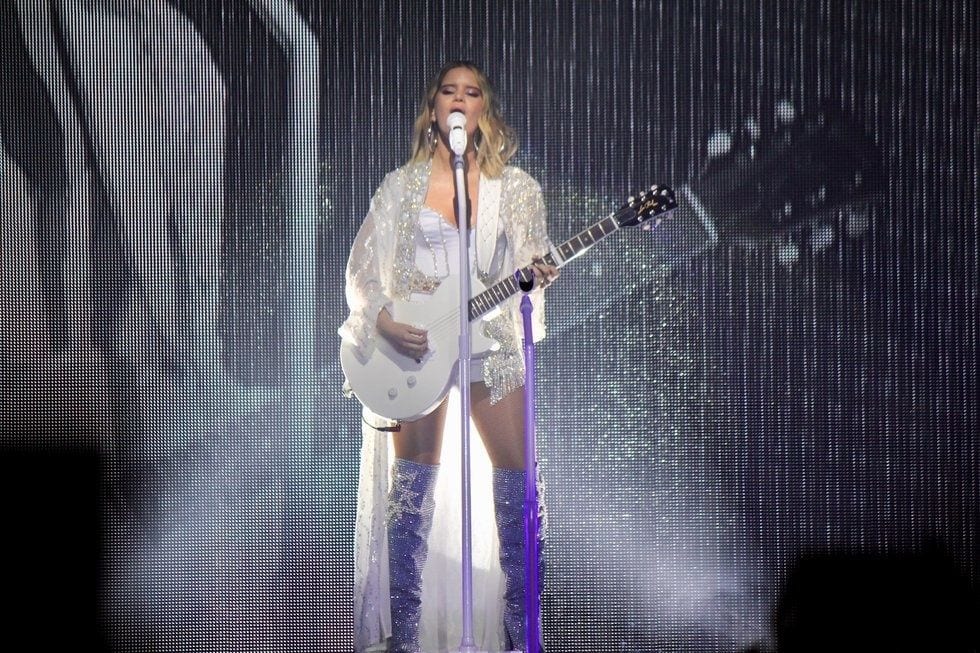 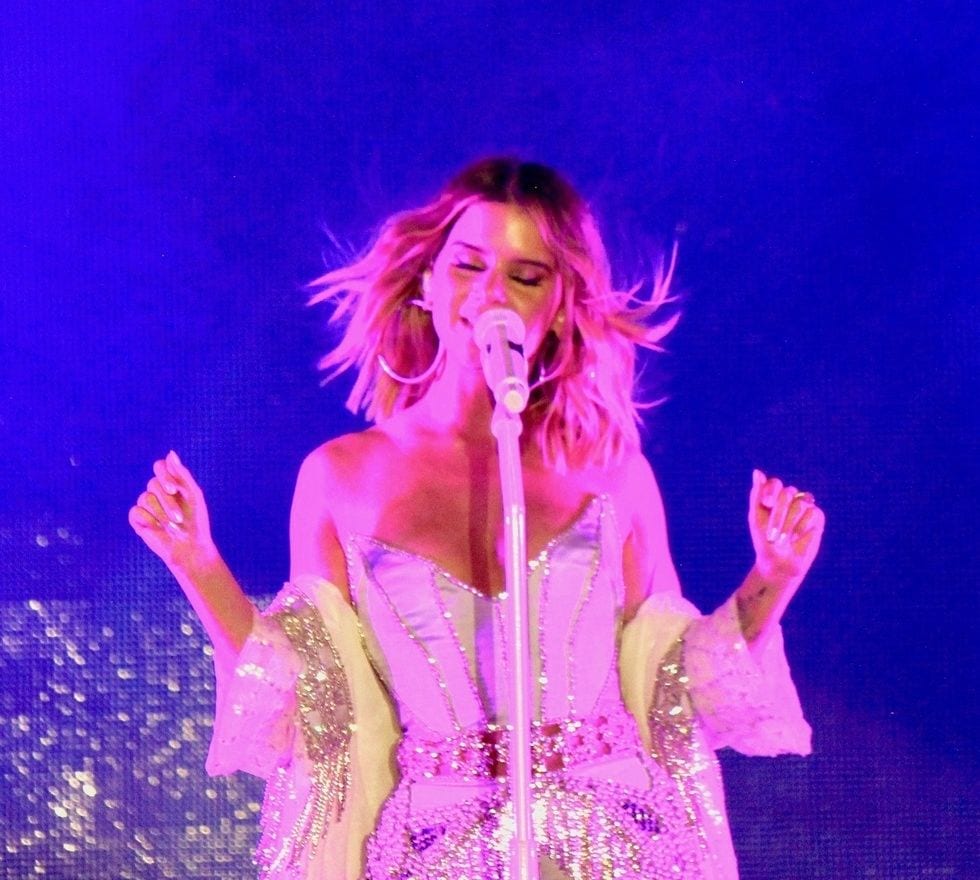 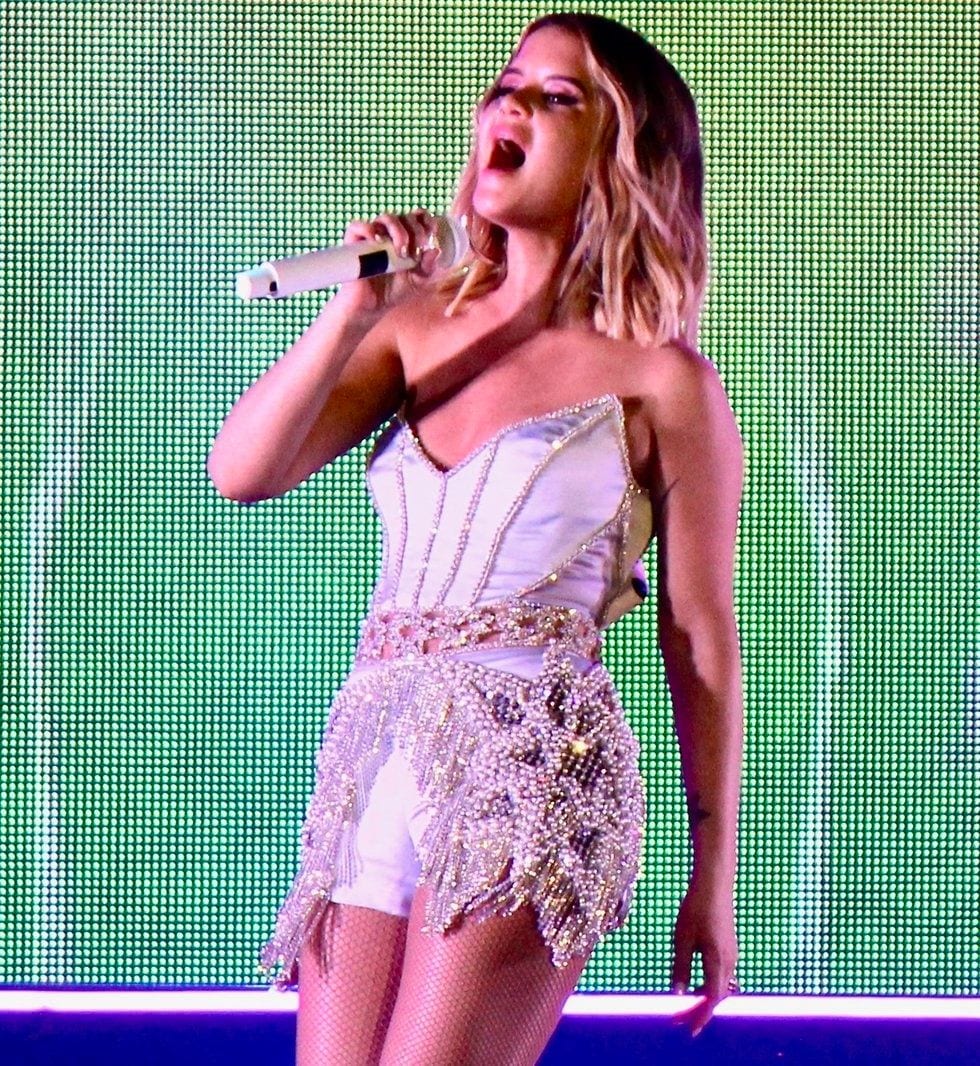 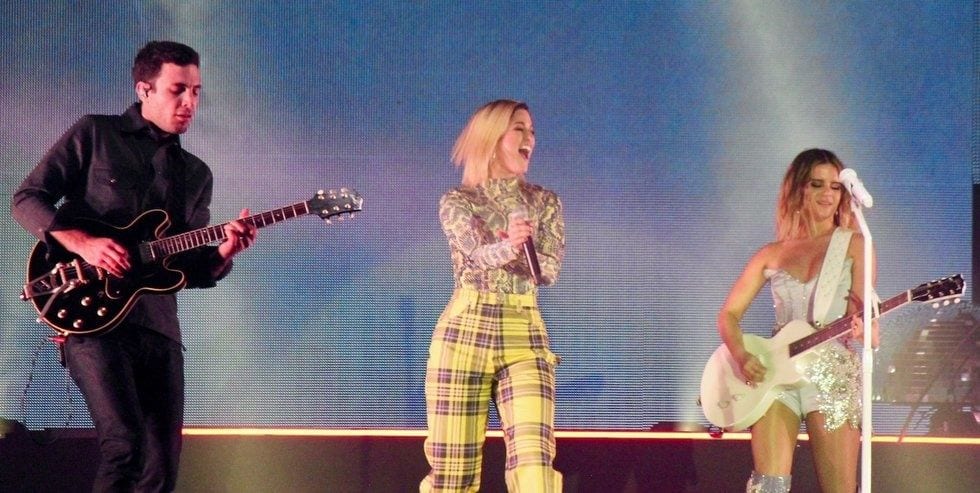 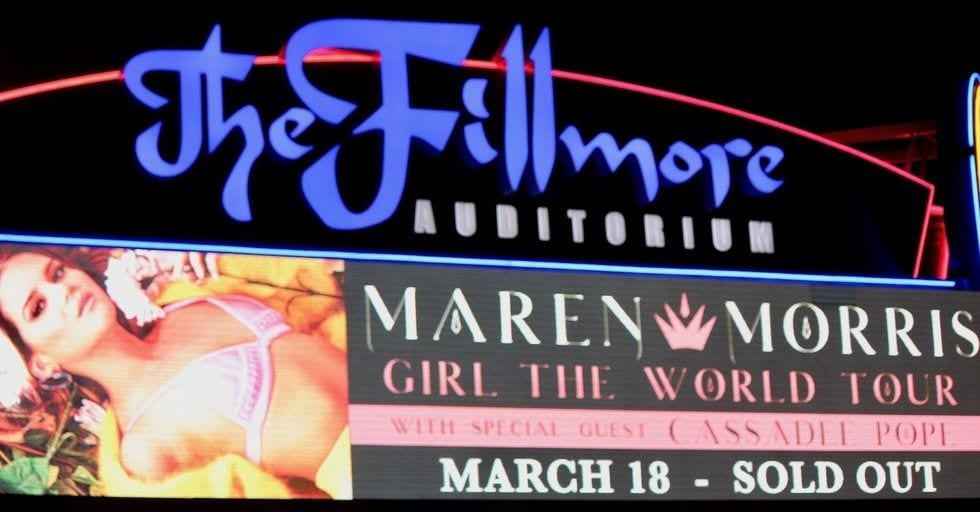 “You guys are making it feel like the weekend up in here,” Morris said on an atypically festive Monday night when the spruced-up Fillmore, celebrating its 20th anniversary with an improved sound system and added tiers of risers to enhance the viewing experience, reached its attendance capacity of 3,700. “About a week ago, I released an album, then the day after the album came out, started a tour, so everybody kinda looked at me like I had three heads or something. (laughs) … We learned very quickly on the first night of this tour that my fans do not come to mess around. They know the words. They already had memorized everything by the time we got onstage; it was crazy. And we’re just so, so excited to be on this tour. …

“I also appreciate you guys being so patient with me, like, writing this album. And making this record did take a while just because we never really got off the road the last three years, so I appreciate the patience because … I wrote a good portion of this record in the back of my bus on the road, so I just had to learn how to write songs on the road for the last few years. I didn’t have to do that with the first album, but this one I am really proud of because so many of the songs were created out of funny stories or conversations that I would have with my co-writers on the road when they would come out to hang with us for the weekend. And so this next one we’re gonna do is on the new album and it’s just a song about nostalgia and the bands that you were obsessed with in high school (loud cheers), the soundtrack that takes you back.”

Though it’s a winsome, glowing ballad, “A Song for Everything”, co-written with Jimmy Robbins and Laura Veltz, could reflect the soundtrack of Morris’ life, with references to Springsteen, “Teenage Dream” and even Coldplay.

In our interview a week before the June 2016 release of Hero, Morris went back further than that, mentioning her go-to karaoke song as a Wizard of Oz fan at the age of nine or ten was “Over the Rainbow”. Then the music of her childhood progressed from Pink Floyd and Led Zeppelin (“My parents are sort of ’60s, ’70s kids,” she said) to the Cardigans, the Wallflowers, Chaka Khan and Beyonce.

Those seminal influences of her youth helped to construct an imaginative propensity to write material that spans decades and genres. Adapting to varying styles with clever crossover turns, Morris transcends country music norms. Seeking out a number of collaborators, she goes way beyond the pop-goes-the-country sounds developed in the ’90s by Faith Hill and Shania Twain.

Of course, it was easier for some of us to recognize (and acknowledge) the talented Texas tornado from Arlington as soon as Hero dropped on an appreciative public.

In announcing the top pick of my year-end list six months later, I wrote, “Just when I thought I was out of the business of listening to country music, this diminutive flamethrower came to the rescue and pulled me back into a raging bonfire.”

Yet it wasn’t until after the release of GIRL that Time magazine finally proclaimed in a headline, “Maren Morris Is the Future of Country Music”. Talk about arriving late to the party. The future is now, y’all.

Despite all of her past success that has included Grammy, CMA, Billboard Music and iHeartRadio Music awards, gold records and platinum singles, Morris seemingly remains humble and content, especially a year after her marriage to singer-songwriter Ryan Hurd, a Michigan native who is preparing to release his debut album with RCA Records Nashville.

She took a moment after performing “Common” (a touching, introspective song made more memorable by Brandi Carlile’s contribution on the album) to reflect on the love of her life just days before celebrating their first anniversary.

“I’ve always written songs about him but now I guess there’s a ring involved, so, I don’t know, it’s, like, more official but he’s always been sort of the muse to a lot of these songs, including this one,” Morris said before introducing “To Hell & Back.”

“If you are in a love right now where it is just completely unconditional, accepting, nonjudgmental, they love you on your worst day, they love all your broken pieces, they’re not trying to fix you, they just love you, consider yourself lucky ’cause that’s an amazing love. And I didn’t have it for so long, so when I did finally have it, I wanted to write about it.”

The fanatical followers at the all-ages show, dominated by young women and teenage girls, respectfully greeted another new, slower-paced song, but with less fervor, perhaps to catch their breaths before the party really got started. Its fury increased appreciably with the four-star “All My Favorite People”, which Morris co-wrote with Hurd and Mikey Reaves. The intoxicating, slap-happy, ass-kicker of a number that can get fannies out of their seats faster than Garth Brooks’ “Friends in Low Places” included an appearance from vibrant supporting act Cassadee Pope, who managed to bring onstage the lively spirit of the Brothers Osborne’s contribution on the recording.

A smiling Pope, set to headline the CMT Next Women of Country Tour beginning in April, alternated verses with Morris, who was plugged in again to complement lead electric guitarist Bennett Lewis. This most valuable player of Morris’ band added stunning solo runs to other crowd-pleasers such as “Flavor”, “Shade”, and an extended version (with band intros) of “Rich”, the good-time essential from Hero.

Obviously, as Morris pointed out during this show, “playing in the bars and honky-tonks since I was 11 years old” has given the 28-year-old dynamo plenty of experience to pull off a phenomenal presentation in this spectacular stage setting, where a screen behind the players enabled fans in the back rows to see her nose ring.

If any songs could have brought down the house before the standing ovations and encore, the 1-2 punch of the soulfully divine “Once” and the strike-it “Rich” payoff would have done it. But Morris’ delivery of gospel-driven “My Church,” Hero‘s lead single that she credits for starting her “much bigger journey” that began on Spotify four years ago before landing on a five-song EP, was better than a bonus baby’s baptism. For anyone hoping to be reborn in the Houses of the Holy, let Morris play the miracle worker.

While show-closing “The Middle,” a catchy EDM-tinged novelty tune written by DJs Zedd and Grey, is fun and frothy and thankfully led Morris to the masses, the power and glory of “My Church” brings the real and righteous zeal. Another classy touch to the conclusion was a rolling screen that listed the players and behind-the-scenes crew members responsible for this production, along with a set list that included the writers and producers of each song.

If country music needs a savior (some say now more than ever), thank heavens that Maren Morris is here to persevere, with so much more to offer the stale genre than good ol’ boys’ twangy tunes about barhops, truck stops, fast cars and faster women. And if a solo Morris can pump life into a dying breed, just imagine what will happen when the Highwomen, her whole lotta love-in three-way project with Carlile and Amanda Shires, hit the road.

7. “All My Favorite People”