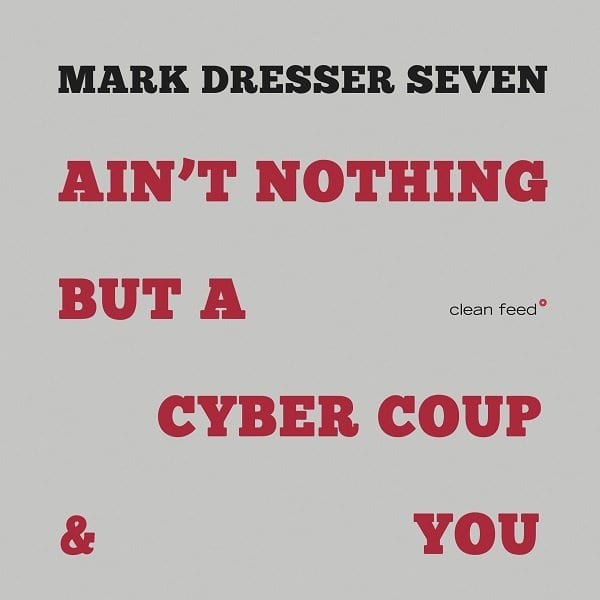 Mark Dresser‘s resume as a bass player is a paragon of the New Jazz. He played extensively with Anthony Braxton in the 1980s and 1990s and recorded for Knitting Factory Records back when that name really meant something. He was part of the John Zorn gang, recording for Tzadik Records, and he played with contemporaries such as Tim Berne, James Newton, Ray Anderson, and Dave Douglas in various formats. At the same time, Dresser is from the West Coast and has played plenty with folks like Nels and Alex Cline, recording for the terrific California label Cryptogramophone. Like so many of the musicians working in this form, he has some roots in classical music, but he is also perfectly comfortable collaborating with more straight-ahead players on their adventurous projects—for example, Dresser held down the bass chair with soprano saxophonist Jane Ira Bloom’s band for quite some time.

So, when I say that Dresser’s latest, Ain’t Nothing But a Cyber Coup & You, from his Mark Dresser Seven, is a New Jazz blend of daring improvisation and challenging composition, I realize that the leader has been pushing this genre forward for a long time.

The band reaches across genres and eras just like Dresser’s career. Veteran reed expert Marty Ehrlich shares the front line with trombonist Michael Dessen (whose own work explores improvisational settings, electronics, and serious composition), flautist Nicole Mitchell (associated with Chicago’s Association for the Advancement of Creative Musicians and that legacy), and violinist Keir GoGwilt (not particularly associated with “jazz”). In the rhythm section, Dresser is with young pianist Joshua White (with a classical background and Southern California jazz experience) and the veteran drummer Jim Black, who powered so many great bands in New York along with folks like Chris Speed and who is still playing brilliantly today.

The result is a group that is prepared to handle Dresser’s off-kilter compositions and take them in just about any direction that beckons. The band’s sound is unusual—with Ehrlich’s reeds, Mitchell’s flute, and GoGwilt’s violin flying about in the upper register and the trombone rumbling beneath. When the band operates as a more traditional ensemble, with a clear head arrangement such as on the Arthur Blythe tribute “Black Arthur’s Bounce”, the combination of sounds is somewhat peculiar, the blend of highs and lows sounding more like a circus band or a classical chamber group than like a jazz band, with the timbres of the instruments never quite merging.

On “Black Arthur”, though, that all makes plenty of sense. Black creates a slapping groove along with the leader, and the violin and horns take turns entering the fray with freedom before the written melody emerges. Blythe fans will easily recognize the feeling of motion from the classic Lenox Avenue Breakdown recording, and Mitchell’s flute combined with Dessen’s low brass is reminiscent of that album’s mix of James Newton’s flute and Bob Stewart’s tuba. The ensemble is designed to sound somewhat ragged and funky, and the players get in lots of fun and daring play over the strong beat.

This approach recurs throughout Ain’t Nothing But a Cyber Coup. “Embodied in Seoul” also begins with more than five minutes of free exploration before the written melody enters, a set of graceful phrases articulated by the four lead instruments but played over a restless rhythm section: Black tumbling freely, White improvising atonally, and Dresser keeping a furious time underneath. The prelude the “melody” is more tentative and exploratory as if the band were scavenging for the material it will need to put together the ensemble interplay that is upcoming.

“Let Them Eat Paper Towels” (presumably a reference to our U.S. president’s attitude toward “his” own Puerto Rican citizens—the title of the album also seeming Trump-related) begins with another atmospheric free improvisation, with the textures of flute and violin, particularly, engaging in intriguing duet interplay. White enters playfully to bring the band into a hopping groove, which leads to one the most attractive melodies on the recording. Violin, clarinet, and flute blend gorgeously here, with Dessen joining the ensemble quietly from the bottom. The sound seems to borrow just a bit from klezmer bands and a smidge from old New Orleans collectives, but the flute and clarinet solos that emerge are distinctly modern. The pattern over which the players solo changes for violin and then trombone, but then the theme returns and you feel as if you’ve almost heard a traditional jazz performance. After which the band plays even more freely than before, with Mitchell (on piccolo) and Black engaging in a dashing duet that brings the whole band back to a groove again—and one more statement of the melody.

Each of the full-band tracks is preceded by a solo improvisation by Dresser, playing his bass with “McLagan tines”, an innovation that creates a strange, lovely tone. This idea works best, perhaps, in moving from “Pre-Gloam” to “Gloaming”. The introduction is odd but singing, with Dresser creating a flute-like tonality that rattles and buzzes his strings with an otherworldly air, then beginning the main tune playing some ringing harmonics that set up the most precious tune of the set. GoGwilt comes out first, playing in duet with the leader, tracing a melody that is tender and just grows in beauty as piano, trombone, and flute enters with a gorgeous arrangement of lines that support it. They all move across a set of composed harmonic changes, converging on a section that sounds composed is its unity and logic. White’s solo is brief and lyrical, leading to a buttery statement from trombone and Mitchell’s best moment on the recording, a sumptuous alto flute statement.

Also lushly beautiful is “Butch’s Balm”, a track dedicated to Butch Lacy, who played piano for Sarah Vaughan. If many of the tracks on Cyber Coup delight in the way that free improvisation can suddenly come together into a playful theme, “Butch’s Balm” ends the session on a more organic note, with a single mournful mood slowly layering into an ensemble theme.

If slightly more conventional sounds become this group, then it’s the title track: an actual rollicking swinger. White’s piano introduction might have Cecil Taylor and Don Pullen in its bones, and Jim Black enters with that snapping rock feeling in his snare attack, yes, but the band attacks the written head arrangement like it is a territory band from Kansas City. Ehrlich’s clarinet solo is fantastically swinging, and the duet between clarinet and violin is as exciting as jazz can be, albeit with a backbeat. Dessen and White solo brilliantly as well, with the piano/bass/drum action sounding like the basis for an entire album of piano trio music on the cutting edge. “Ain’t Nothin But a Cyber Coup & You” ought to be on some kind of jazz playlist as one of the most thrilling tracks of the last decade.

The Mark Dresser Seven is capable of this wide range of feeling and sound, from joy to mourning, from conversational free playing to sumptuous ensemble sounds. If Ain’t Nothing But a Cyber Coup & You has a flaw, then it is that the project doesn’t have a pointed thesis statement. As lovely as the short introductions are, this “album” is more like six different approaches to how contemporary New Jazz can sound, with seven consistent voices in conversation but not one consistent group sound or ensemble identity.

And maybe that sums up “jazz” in 2019—there isn’t and shouldn’t be one approach that prevails and dominates. The Mark Dresser Seven can, seemingly, do it all. But hearing them do it all on a single recording both dazzles and spreads things a bit thin.