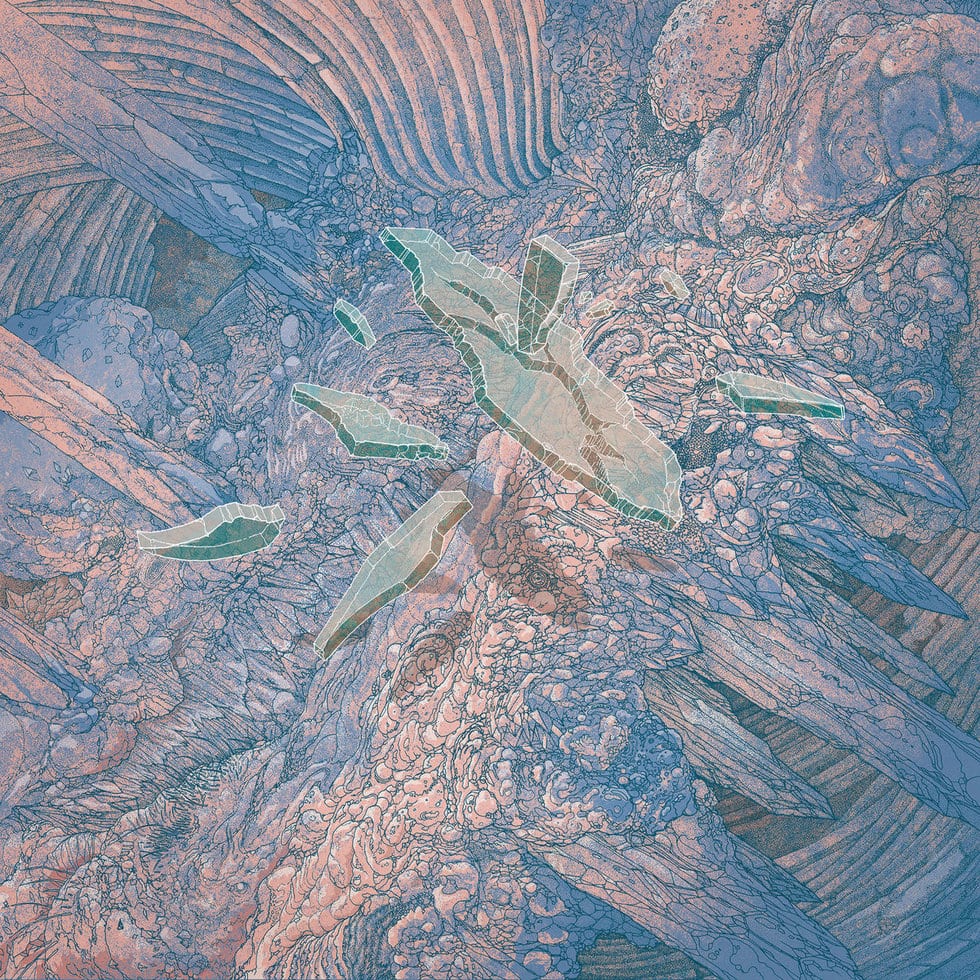 Jason Carty and Jadie Cox are two excellent musicians that came into prominence through the London math rock scene of the late 1990s and early 2000s. The two have participated in many impressive acts that range from alternative rock and hardcore punk, all the way to complex math rock and post-hardcore. However, in coming together now with their new project Markers, the duo leaves behind much of the aggression and immediacy of their previous works in favor of a more ambient and experimental path.

So Markers is a departure from the habitual for Carty and Cox, uprooting their math rock origins for the more ambient and minimalistic side of experimental music. The results of this shift is the band’s debut Heaven in the Dark Earth, a sonic exploration with a stripped down instrumentation. In fact the band mainly relies on their guitars, which are the protagonists of this saga, and on sound design to create this newfound methodology.

The deep, echoing start of the record’s introduction “Fountain” highlights this connection of Markers to the drone mindset, implemented through smart processing and audio effects. Even though this type of approach is featured sparsely throughout the album it adds to the grand, cosmic message of this work. The introduction of “The Fountain” might provide a slightly brutal and disruptive motif, but at other times, as with “Skvala” the approach takes on a more mystical and ethereal manifestation. It is an idea that is based on contrast, and while the drone experimentation and sound design practices add to the darkness of this work, the melodic element adds to the light that radiates through this work.

So despite the abstract themes that Markers awaken with their drone overtures, the weight of the relies on the guitar melodies that Carty and Cox unleash. And this is also the part where Markers strike a very delicate balance, as they are able to add an element of complexity to their slow-paced, investigatory moves. “In Amber” sees this side of the band come into light, with the slightly dark and jazz-like underlying theme slowly unfolding. Despite the dropped downtempo, Markers still add an element of complexity to the fold, something that is highlighted further with “Marine Parlance”. In that instance Carty and Cox display an almost progressive touch when it comes to their clean riffology, bringing out a strange hook within the minimal progression.

It is this quality of parallel exploration and expression that provides Heaven in the Dark Earth its off-kilter characteristic. Despite the adventurous sense of the drone dimension, Markers still find the space to bring forth their beautiful melodies and create an emotive response. The ending of “In Amber” is a prime example of this fantastical recital, while “Civil Twilight” stretches this idea to take on a powerful and towering manifestation. What is so interesting in the end is that Markers has been able to branch out off the main minimalist paradigm, not leaving behind their melodic edge in favor of the more pronounced soundscapes.