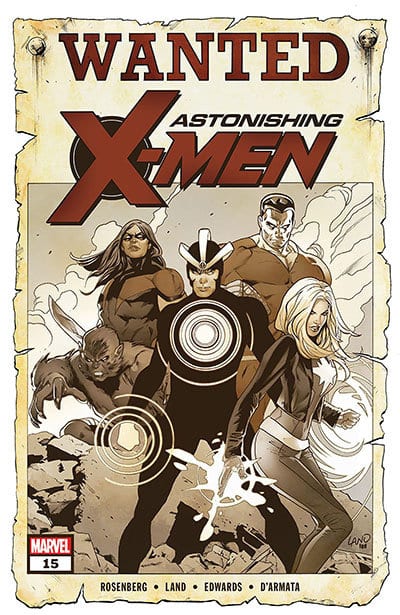 In principle, being a comics superhero is simple. You find criminals, you fight them, and you defeat them. If you can cooperate with the authorities along the way, then that’s a nice bonus. When heroes have to operate as criminals, though, things aren’t as simple. That doesn’t just apply to vigilantes like Batman and the Punisher, who overtly operate outside the law. Sometimes, a superhero has to function in an environment where they’re branded a criminal for the wrong reasons.

That is Alex Summers’ situation in Astonishing X-men. Now that he’s not inverted anymore from the events of AXIS, he’s attempting to rebuild his superhero credibility. His timing is actually really good, in some respects. With both his brother, Cyclops, and Captain America also having to salvage their reputations due to events like Secret Empire and Avengers vs. X-men, he’s following ongoing trend among heroes. With the way things play out, however, he’s going in the wrong direction and it’s not entirely his fault.

Matthew Rosenberg and Greg Land give Havok plenty of opportunities to channel his brother’s leadership skills. He manages to assemble a new team of X-men to carry out heroics on their own terms. It’s not exactly a team of A-list heavy hitters, though. Between Warpath’s attitude in Weapon X and Colossus still recovering from his failed wedding in X-men Gold #30, Havok needs more than just leadership to get them on the same page.

The underlying plot of Astonishing X-men #15 starts off simple. The Reavers are on the loose again and the X-men usually don’t have qualms about fighting Reavers. However, some major complications emerge that would hinder Captain America on his best day. These aren’t the traditional, mutant-hunting Reavers the X-men are used to. They’re now directly sponsored by the government and operating under the guise of law enforcement. Given the government’s tenuous history with policing mutants, it’s only shocking that they didn’t resort to killer cyborgs sooner. 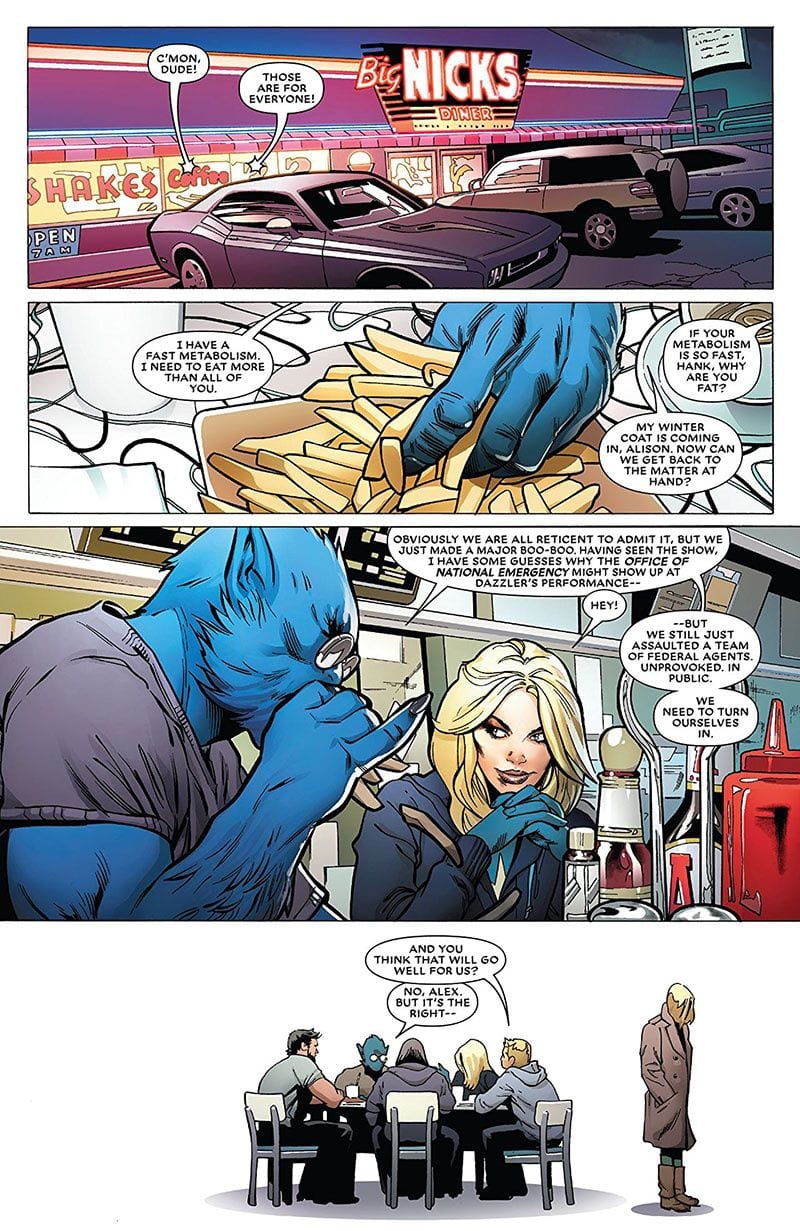 This puts Havok and his new team are behind the curve. Their confrontation with these state-sanctioned Reavers goes so badly that even Kitty Pryde has dissociated the X-men from Alex’s team. Logistically speaking, they can’t even call themselves X-men. In the eyes of both the law and their friends, they’re not superheroes operating as criminals. They’re just criminals.

This isn’t just bad press like the kind Spider-Man deals with every other day. Officially, Havok’s team fight and evade government agents. That’s both frustrating and jarring because it subverts the X-men’s traditional approach to battles. Like Sentinels or evil clones crafted by Sinister, the Reavers are the kinds of enemies that X-men usually battle without a second thought. It’s almost like a reflex akin to Captain America saluting the flag or Deadpool making a dirty joke.

The difference this time is that the Reavers are sanctioned by the government. It’s not entirely a mutual partnership. The Reavers, led by Donald Pierce, make it abundantly clear that this partnership was imposed. They didn’t cooperate with the government out of civic duty. They were essentially drafted into serving and Havok doesn’t find that out until it’s too late. 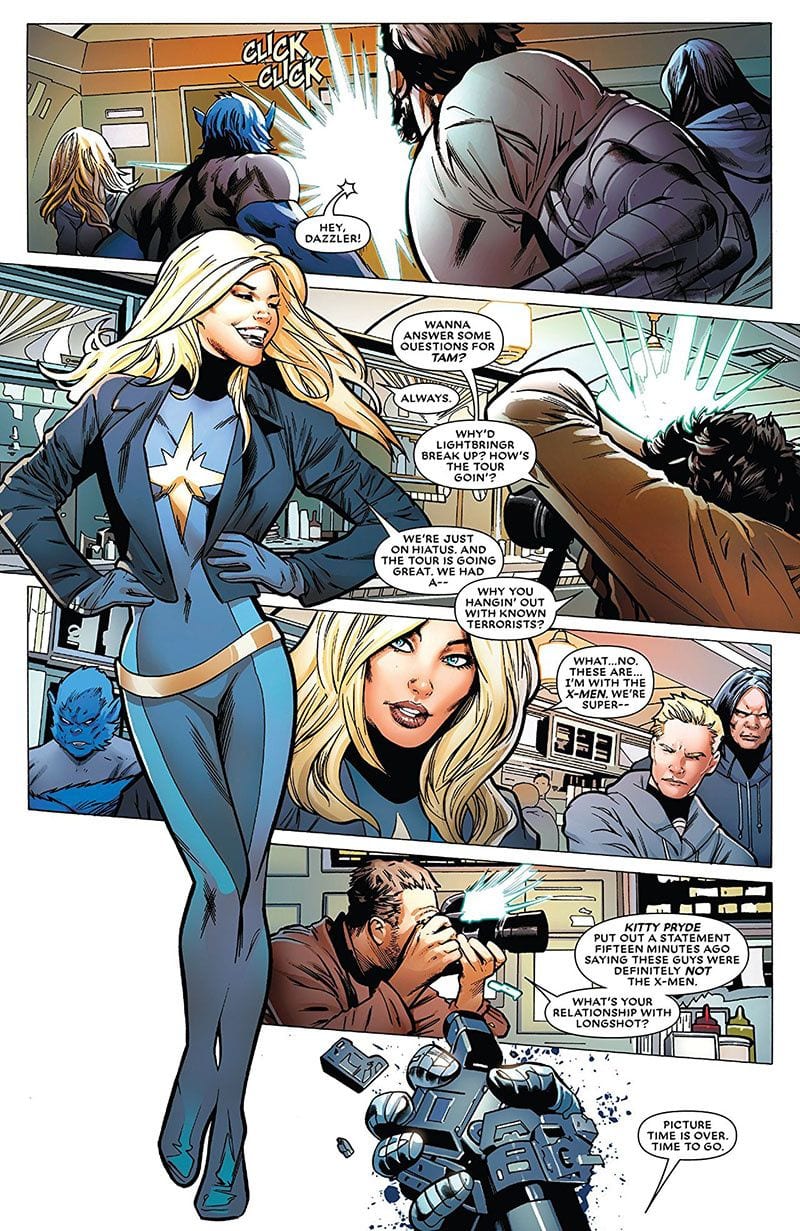 This creates an unusual but interesting backdrop to the conflict. There’s no mind control or inverted personalities at work here. The only alteration to the X-men/Reaver clash is that the Reavers are now operating under the whim of the authorities. Even if they do it unwillingly, they’re still technically government operatives and Havok’s team fought them. From a legal perspective, they assaulted agents of law enforcement. That’s not what heroes do. That’s what criminals do.

It’s less about the ethics of heroism and more about the bureaucracy surrounding it. Any team of heroes, be they X-men or Avengers, can take down all the cyborg assassins they want. Both the public and those in government will gladly cheer them on. However, as soon as those same cyborg assassins start operating with the government’s seal of approval, those cheers turned to outrage.

It puts Havok in an unusual predicament. He wants to redeem himself. Instead, he and his new team find themselves on the wrong end of the law and public opinion. The media doesn’t frame the story as the X-men heroically defeating the Reavers before they can harm innocent mutants. They report it as a group of rogue mutant terrorists battling government forces.

Technically, that’s not some misleading headline on the front page of the Daily Bugle. That actually happens, forcing Havok and his new team to lay low. That doesn’t work either, though. The Reavers still find them, which means they have to defend themselves. Doing so means fighting back, but that only compounds the problem because they’re still fighting government officials.

It’s a no-win situation for Havok. Unlike his older brother, he doesn’t have a boy scout reputation to fall back on. People may question a news story that claims Captain America sucker-punched a police officer, but they’re less inclined to doubt that Cyclops’ less capable brother did something awful, especially after being inverted for so long. He even acknowledges how bad it gets, escaping to a bar frequented by other colorful criminals. It seems every conceivable force is working against Havok’s efforts to redeem himself and for once, that’s not him just brooding. 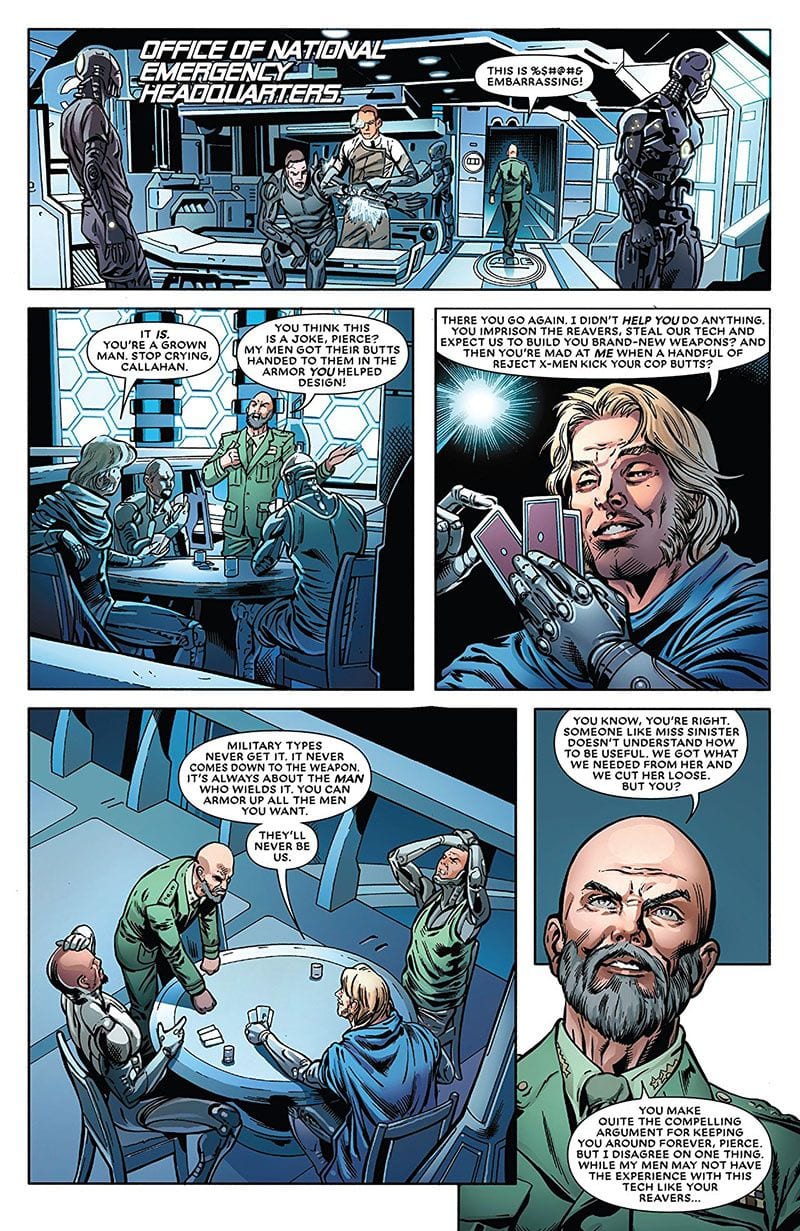 It’s not completely hopeless, however. Rosenberg never lets the tone of the story get too bleak. Havok still gets a chance to do his brother proud, hatching a plan towards the end that requires him to embrace his new criminal connotations to some extent. It’s bold, but fitting approach. Given how the plot is almost framed, it feels necessary.

That also feels like a flaw, of sorts, because neither Havok nor his team really have much choice along the way. There’s never a sense that they have any agency in how they impact the plot. The same goes for the Reavers, as well. Having that government label really limits their agenda to serving whoever has the right emblems on their uniform.

Even with those limits, Astonishing X-men #15 succeeds in presenting Havok with a daunting, yet novel challenge on his path to redemption. Just forming a new team of X-men and following his brother’s example isn’t enough. He has to operate as a criminal in order to become the hero he wants to be. His brother would be proud, but probably just as frustrated.