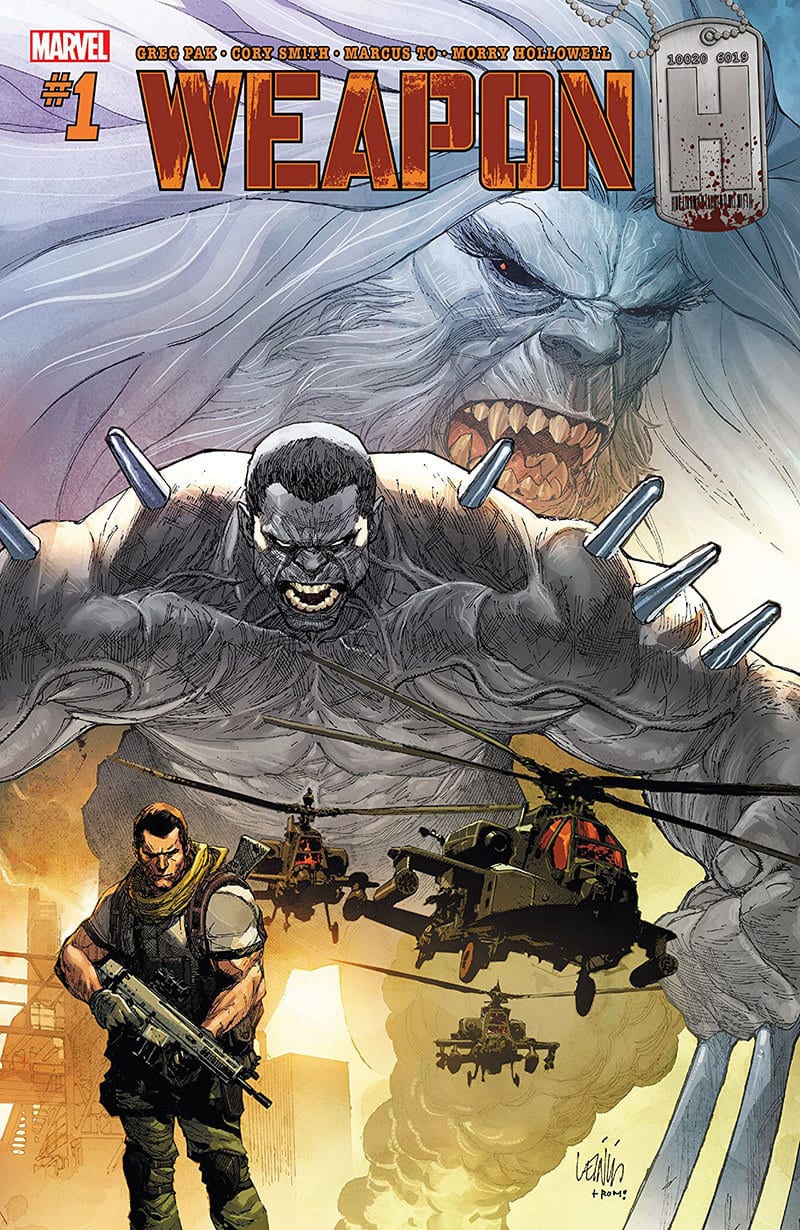 In an era of reboots, remakes, and re-castings, the bar for what constitutes overdone or overused seems to rise every year. Taking a chance and trying something new is just too risky and expensive. It’s safer and easier to go with an established trend, even if it means leeching off its popularity to a point where it’s so intentional that no one bothers to joke about it. While it may frustrate those hoping for something new, it’s hard to argue the power of the market. As long as it sells, it doesn’t matter how uncreative it may be.

On paper, Weapon H sounds like a concept that is 95 percent gimmick and only five percent story. It combines Wolverine and the Hulk. The results are exactly what they sound like. In the pages of Weapon X, it emerges as a daunting threat from people who still aren’t convinced that any effort to create a living weapon in the Marvel universe is anything other than an elaborate death wish. The idea that anything anything good could come from combining Wolverine and the Hulk sounds like the kind of thinking that requires repeated head trauma from Juggernaut.

Even if the concept seems basic, it still has intrigue. Greg Pak, who created Weapon H in the pages of Weapon X, uses the full range of his X-men and Hulk pedigrees to create a character who deserves to be more than just a gimmick. Weapon H is one of those characters that anyone who believes that Wolverine and the Hulk are too exposed can find an excuse to discount.

It’s a story that has to take chances by being based on such a simple premise, mashing Wolverine and the Hulk into a single character. It faces more obstacles than most in its effort to be compelling. Combined with the art of Cory Smith, it has more going for it than the concept may suggest.

In one issue, it follows a character that never feels too much like the Hulk or too much like Wolverine. Pak goes out of his way to put Weapon H on his own path. It may not entirely unique in that there are elements that Hulk and Wolverine fans alike will recognize, but the story never feels too familiar or predictable beyond the messy monster battles. That’s one aspect that can never be overdone.

Fighting monsters, however, is a very small part of the story in Weapon H #1. It may be too small to some extent, but necessary in order to establish who Weapon H and his alter ego, Clay, is in this story. He’s not the smart, yet meek man with anger management issues like Bruce Banner. He’s not a hard-drinking, womanizing brute like Wolverine either. He’s a trained soldier who made the mistake of thinking a living weapons program wouldn’t screw him over and leave him with lasting scars.

However foolish that assumption might seem to anyone who knows anything about the history of living weapons in the Marvel universe, Clay still carries himself like an honorable man and a dutiful soldier. These same traits are what helped him survive the events in Weapons of Mutant Destruction that play out in Weapon X and Totally Awesome Hulk. They’re also what motivates his actions in this new phase of his story.

Clay is hardened at this point. He knows he’s a target and not just because living weapons tend to draw out the worst kinds of attention. He also knows there are plenty of things that need smashing and stabbing. He doesn’t put on a cape or a goofy costume and go out looking for it. He understands it’s bound to come to him, which is why he tries to keep a low profile. He works odd jobs, pretending he doesn’t speak English or Spanish. He avoids populated areas or established trails. He basically does what Bruce Banner does, but without as much whining.

That, in and of itself, makes Clay and Weapon H more appealing. His situation is bad, but he doesn’t spend half his story complaining about it. He grits his teeth and toughs it out, fighting whatever problems come his way, including the non-monster variety. At a time when many soldiers aren’t given the Captain America treatment, Clay’s story feels more real, even when he eventually has to fight a monster.

To some extent, that kind of realism undercuts the monster-fighting spectacle of the story. A good chunk of that story is dedicated to telling the story Clay’s family, who think he’s dead. This is where the overall flow of the narrative loses some momentum. There’s an effort to establish drama among Clay’s wife and kids, but it comes off as flat. Their moments take away valuable time from what could otherwise be utilized for fighting monsters.

Along with Clay’s family, there’s another sub-plot involving Roxxon, one of the few organizations in the Marvel universe that are bold or foolish enough to get involved in living weapons. While there’s a legitimate reason within the context of the story, it only comes off as some generic evil plot from a James Bond villain. If nothing else, Roxxon gives Weapon H something other than monsters to smash.

There’s certainly plenty of potential for smashing in Weapon H, as a whole. Clay’s story is just beginning. Both Pak and Smith lay a solid foundation for a character who could easily be overlooked as just another rip-off/mash-up. However, Weapon H never attempts to replace the Hulk, Wolverine, or any other character. He doesn’t even attempt to subvert their stories in pursuit of his own. He tries to chart his own path within the Marvel universe. That shouldn’t be such a novel concept, but it’s frustratingly rare in the current era of superhero saturation.

There’s enough appeal with Clay and Weapon H to make the story in Weapon H #1 feel compelling. While there are plenty of familiar elements derived from established characters, Pak succeeds in making the story feel unique and personal. It just doesn’t have enough spectacle or monsters to feel exciting or nuanced. That can certainly change, but he’s going to have to fight more monsters if he wants to catch up to Wolverine and the Hulk.