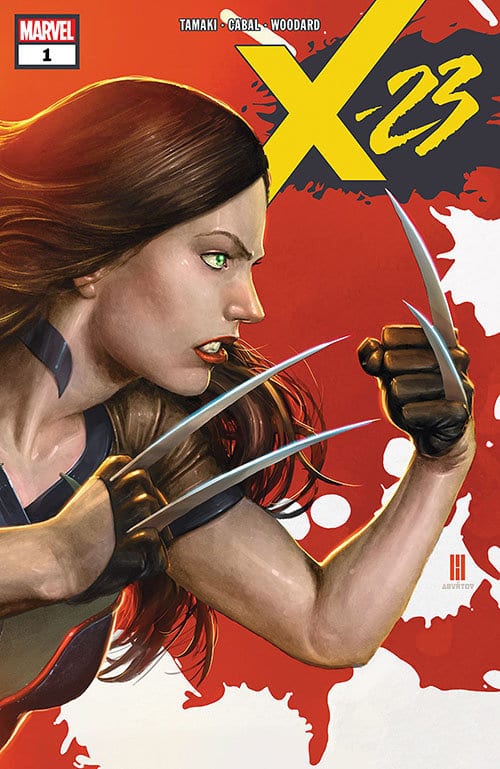 On paper, the arc of a superhero is supposed to move forward with progress and growth occurring along the way. In practice, however, there are setbacks, regression, and pitfalls, but not all of these problems involve dying and coming back to life every once in a while. Certain characters have an iconic status built upon decades of evolution, eventually settling into a particular status quo that best reflects who they are and the breadth of their appeal. To that extent, Laura “X-23” Kinney is still evolving.

Her story can’t be considered new anymore, having played a part in a major X-men movie and held down multiple solo runs from the likes of Marjorie Liu and Tom Taylor. She also can’t be classified as “old”, either. Her growth has been rapid since her debut in the X-men: Evolution cartoon, but her story tends to undergo more shifts than most.

There are times when Laura seeks to avoid the violent conditioning she endured under her creators, seeking to build a normal life, to the extent that anyone related to Wolverine can have one. She also goes through periods where she attempts to channel those violent skills for heroic purposes, just like Wolverine has. After taking the mantle of Wolverine for a time under Tom Taylor, Laura is at a point where she no longer hides from her bloody past or her violent skills. However, she still has some growing to do and not just because she has a little sister and a pet wolverine to care for.

This is the situation that Mariko Tamaki and Juan Cabal inherit in X-23 #1. Laura’s past is still chasing her and her future is still in flux. She has more to lose now than she did before with Gabby in her life. Even though she’s still a teenager, she can’t afford to be as irresponsible as most teenagers, as the Peter Parkers and Kamala Khans of the world can attest. Between having the baggage of Logan’s legacy and dealing with an overly-energetic sister with a pet wolverine, Laura has her work cut out for her.

Tamaki and Cabal still have her pushing forward. The stakes are pretty standard for any clone/daughter of Wolverine. There are still people in the Marvel universe who think it’s a good idea to clone Logan and make living weapons. How anyone can continue to believe that will lead to anything other than a brutal death is laughable, if not absurd at this point. Nobody even tries to make excuses. They’re just willing fodder for Laura’s continued evolution. 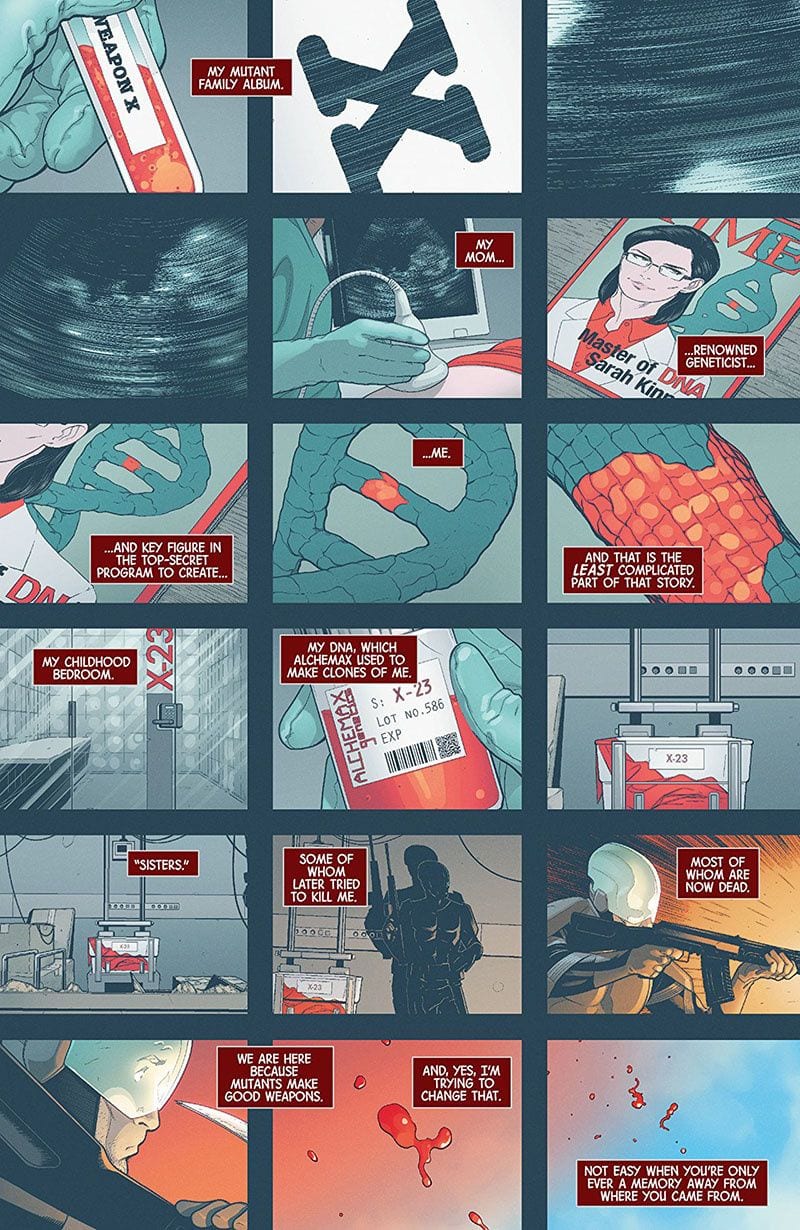 While the setup is basic, involving a generic threat with ties to Alchemax, Tamaki doesn’t focus too much on the slashing and stabbing that’s standard for any X-23 series but those moments are there. There’s even a hulking lizard man thrown into the mix, which helps stir things up from the standard hired goons that Laura is known for decimating. However, the real meat of the story is found in Laura’s personal journey.

As she’s navigating the standard Wolverine-styled action sequences with Gabby, she reflects on her upcoming birthday. Being a clone brings complications. Laura starts out with mixed, but ambivalent feelings on the matter. She initially gives the impression that it’s not a big deal. Gabby, as she’s been doing since she showed up in All-New Wolverine, gets her to reconsider and is lovably adorable every step of the way.

It also helps that Laura and Gabby aren’t the only clones dealing with identity issues and birthday drama. After meeting up with Beast at the Xavier Institute, they cross paths with the Stepford Cuckoos. As it just so happens, they’re celebrating their birthday. That helps make birthdays, in general, a bigger issue and one that acts as a catalyst for the story, albeit indirectly.

As is often the case with plots involving clones and living weapons, there’s a larger agenda unfolding behind the scenes, even before the stabbing starts. It involves Alchemax, but it also involves the Stepford Cuckoos as well. Tamaki even digs a bit into the Cuckoos’ history, some of which hasn’t been referenced since the latter end of Grant Morrison’s run on New X-men. It helps raise the stakes and complicates Laura’s new mission. Unlike lizard men throwing trucks, this isn’t an issue she can resolve with her claws.

While the connection between Laura’s mission and the Cuckoos is established, things don’t become violent quickly. Things even diverge somewhat as Laura debates the merits of birthdays while the Cuckoos reveal some affiliations that would probably not sit well with any former living weapon. There’s a distinct sense of inevitability that emerges once the agenda of the Cuckoos emerge. Even though part of that agenda still involves celebrating a birthday, it seems unavoidable that they’re going to clash with Laura and Gabby.

The conflict doesn’t manifest initially and that’s not a bad thing. X-23 #1 spends more time exploring how Laura sees herself as she continues to navigate a world where she’s technically an escaped lab experiment. Her reservations about making a big deal about her birthday reveal that she still struggles with an identity crisis on some levels. She keeps trying to forge her own path, but can’t escape the fact that she’s a clone. The Stepford Cuckoos are in the same boat, although their efforts to cope wit it don’t come off nearly as healthy as Laura’s.

It’s a struggle that has been plaguing Laura since her creation, but the fact that she’s at a point where she’s uncertain about the merits of birthdays still counts as progress on some levels. While the details surrounding the plot are fairly standard, X-23 #1 still succeeds in sending the message that Laura is evolving and making progress. Having a quirky little sister with a pet wolverine actually helps more than it complicates things.

Some of that progress still comes off as only partial, though. While X-23 #1 does plenty to create new conflicts, it leaves a lot of unanswered questions. There’s no explanation as to why Laura is going by the “X-23” moniker instead of identifying with the Wolverine family. There’s also little in terms of connections to the larger X-men continuity. Even though Laura and Gabby are current members of X-men Red, this affiliation has no real impact.

The story still succeeds enough in terms of putting Laura on a new path, one that will likely affect how she approaches future birthdays. She is every bit as entrenched in the X-men comics as Logan, Deadpool, and Doop. She still has plenty of room to grow and if she can just start seeing the world the same way Gabby sees snack food, then she’ll be just fine.