Teenage superheroes have a special appeal. From Robin to Bucky Barnes to Kamala Khan, they act as a contrast to the adult heroes in their world. They represent a brand of wide-eyed idealism that embodies the spirit of youth. Being so young, they haven’t yet become jaded or broken by one too many fights with super-villains and their henchmen. In many cases, young heroes reflect who older heroes used to be, how far they’ve come — and how far they’ve fallen.

Laura “X-23” Kinney, however, is the antithesis of that archetype. Rather than personify the innocence of a particular hero’s idealism, she embodies a worst-case-scenario for Wolverine. She’s everything Logan could’ve become if Weapon X succeeded in turning him into a functional living weapon. Even though she escapes that dark world, she only does so after losing her innocence and hurting those closest to her. It’s a big part of what makes her such a compelling comic book character. She carries many scars and burdens from what she endures. Moreover, she makes it her mission to prevent others from suffering what she suffered.

Like Tom Taylor does in All-New Wolverine, Mariko Tamaki continues this mission for Laura with a new set of challenges. Her struggle is no longer something she can confront on her own. Much like Logan, she forges a strong sense of family over the course of her journey. Her clone sister, Gabby, does for her what other X-men like Jubilee did for Wolverine. She gives her a more personal reason to do what she does. To some extent, Gabby is very much the youthful idealist that Laura never got to be. Protecting that isn’t just part of her mission; it’s an important part of protecting her family. 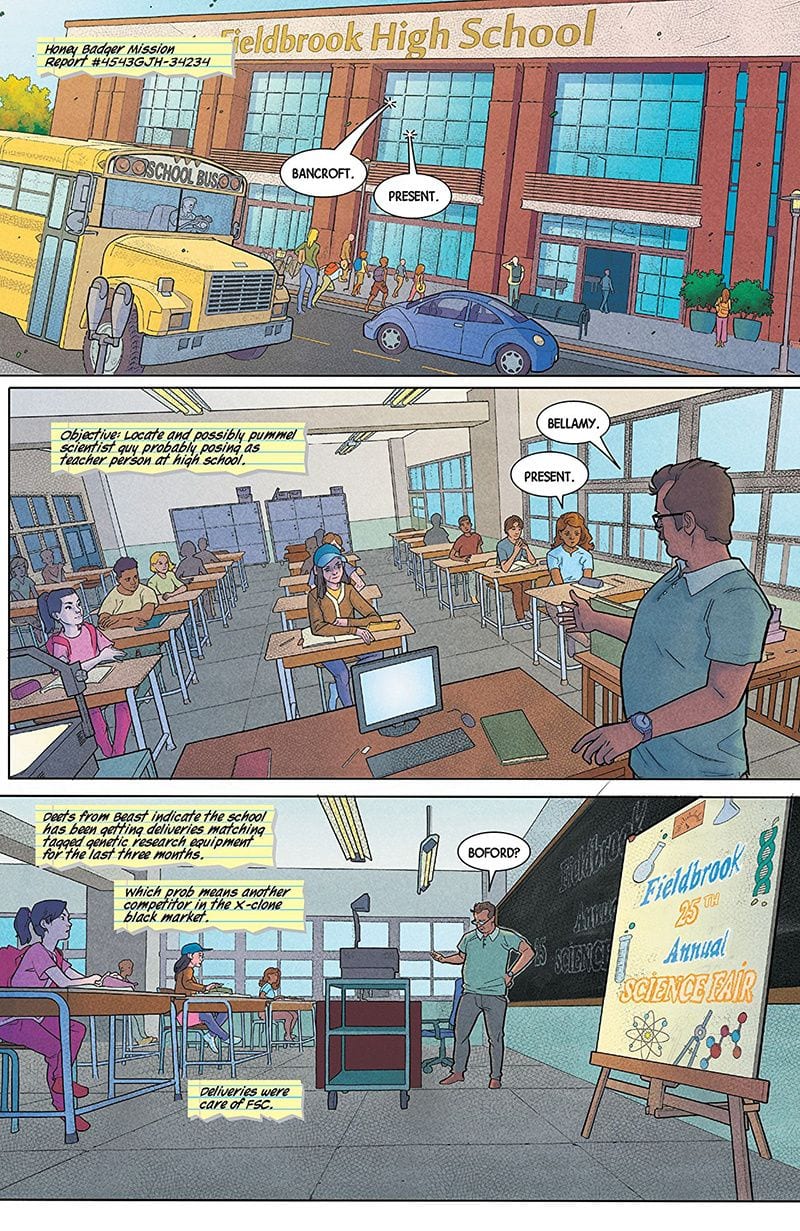 In X-23 #6, Gabby gets to flex that youthful spirit more than usual because she helps Laura infiltrate a high school. Their reasons for doing so aren’t as important as the inherent appeal of seeing Gabby in such a colorful situation. She’s already a fun-loving, charismatic idealist with uncanny charm. The very concept of her in high school has plenty of intrinsic appeal. This is a place where hormones, gym class, and homework tend to crush whatever child-like spirit anyone has left in them. Gabby is the perfect counter to all that.

Given the setting, the stakes aren’t very high. There’s no clone army or Weapon X knock-off hiding in the shadows. The enemy in this case is just some devious teen prodigy named Roberta. She’s a girl with the personality of a pre-Iron Man Tony Stark and Regina George from Mean Girls (Waters, 2004). She’s still dangerous in that she manages to bring a killer robot to a science fair. Given all the killer robots in the Marvel Universe, however, this one comes off as mundane. It still gives Gabby and Laura something to fight, but that’s the extent of it.

The primary appeal of X-23 #6 is seeing Gabby and Laura navigate high school the way they have other missions. It’s not overly serious, but Tamaki avoids building the plot around generic melodrama. Gabby narrates the story through inner monologue that perfectly matches her tone. She carries herself like a kid playing cops and robbers, but with killer robots and evil science nerds instead. It’s cute, but anyone who’s been following Gabby since her introduction in All-New Wolverine won’t see anything they haven’t come to expect.Laura still does things her way. Gabby does the same and that gets her into trouble. It’s a predictable kind of trouble, but there are a few twists. Killer robots tend to be fairly bland in terms of the threat they pose, but the one they encounter manages to mix things up. It’s not entirely built around firing lasers and destroying parked cars. Property damage and dead mutants aren’t Roberta’s primary goal. As a result, it doesn’t escalate to the point where Gabby and Laura have to call in backup. 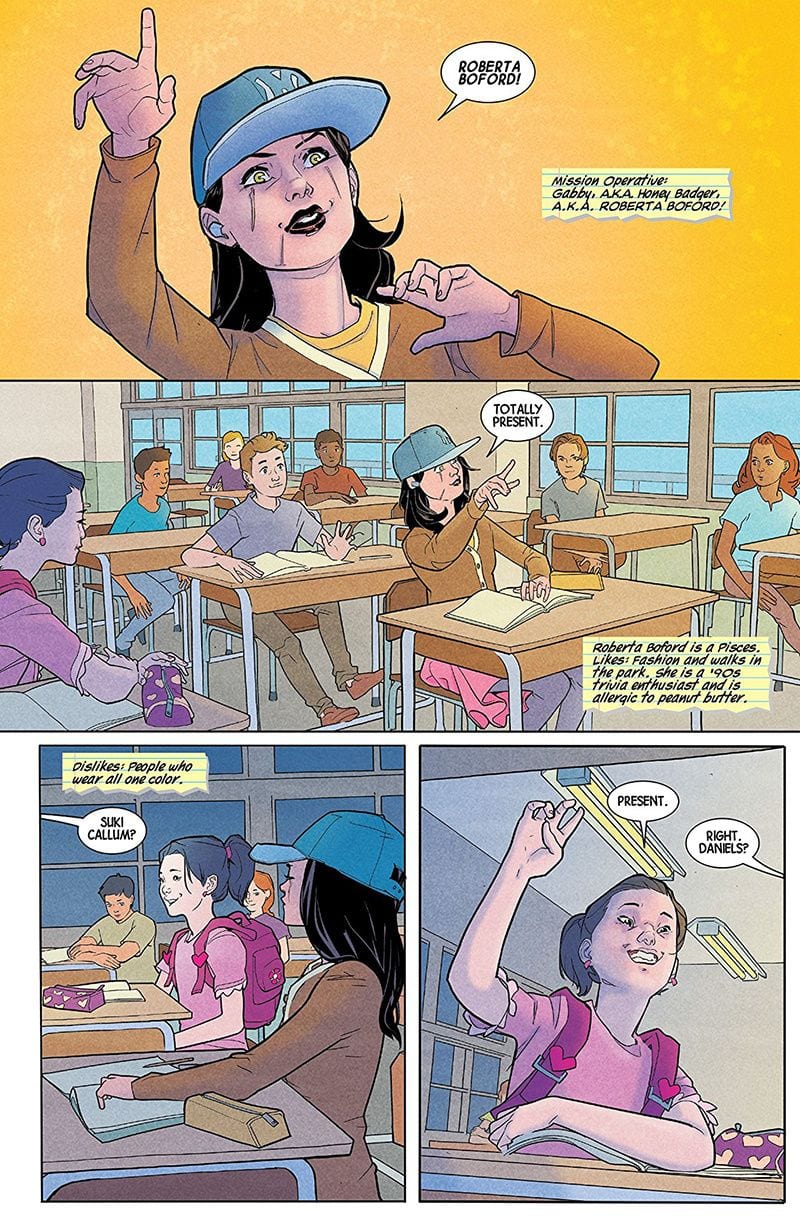 It’s a low-stakes battle, but one that does plenty to highlight the contrast between these two clone sisters. One is an upbeat, wide-eyed optimist. The other is a damaged soul with deep emotional scars. Beyond qualifying just one of them to be a gym teacher, it shows how Gabby and Laura complement one another. They’re two very different personalities, but they’re still family. They help, annoy, and comfort one another in their respective journey, sometimes all at once.

X-23 #6 doesn’t attempt to reinvent that dynamic. Instead, it shows how good Gabby and Laura are for one another. Beyond that interplay, though, the plot surrounding them is still lacking. Roberta has no depth for an antagonist. Laura and Gabby don’t get a chance to interact much with other students and teachers. A mission at a high school doesn’t seem too different from a mission to a Sentinel factory. There are just more teenagers, teachers, and hall monitors involved.

It feels like a missed opportunity. Throughout her history, Laura gets a chance to interact with others and experience things that don’t involve stabbing killer robots or mad scientists. It plays an integral part of her development over the years. While Gabby is still relatively new, by comic book standards, she doesn’t get to grow in those situations. She has a chance to do so here, but it’s glossed over so that she and Laura can fight another killer robot. By both high school and X-men standards, this doesn’t make for a defining moment.

If nothing else, X-23 #6 serves as a reminder that there’s still a place in superhero comics for Gabby’s brand of youthful idealism. Other superheroes tend to become jaded as they get older. Some even become hardened cynics. That’s what makes Gabby’s character a breath of fresh air. She’s good for Laura and she’s good for all those around her. Someone like her could make even high school more enjoyable. It’s just a shame she never gets a chance to show that. 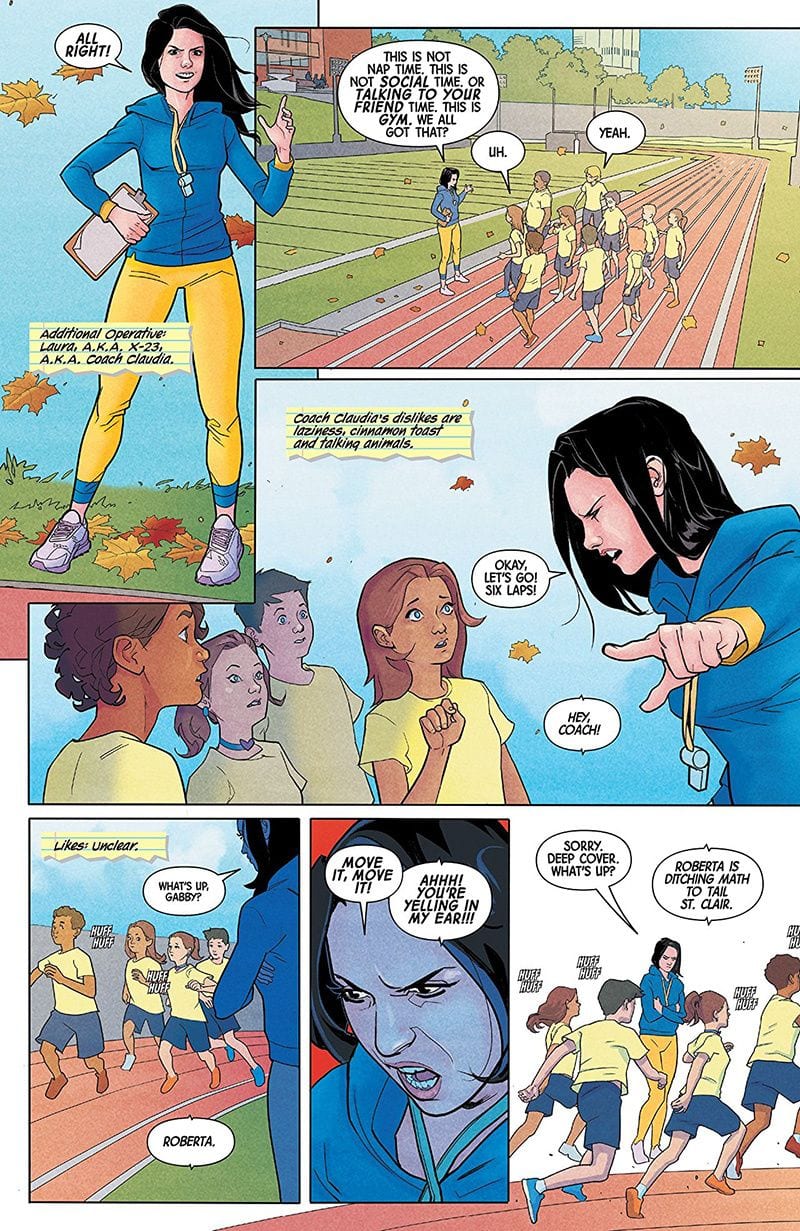