As has been stated often and as we can’t be reminded often enough, Mary Pickford was the most powerful woman in Hollywood during the silent era. Since establishing herself as a star in the 1910s — really a superstar by today’s standards — she’d taken control of her career and produced her own vehicles. This became officially known when she co-founded United Artists, the era’s most important independent production company. Now restored and tinted on 4K Blu-ray/DVD combos are two of her classics separated by a decade, one from 1915 and one from 1925.

Both films exploit her popular persona of the waif. She played other roles, but the public simply wouldn’t let her get away from pigtails. Well into her 30s, Pickford was the waif-iest waif in film history, and the number of convincing variations she wrung on this theme is remarkable. Many of her waifs were derived from well-known literary sources, and that’s the case with these two items.

First up is Fanchon the Cricket (1915), a popular hit for Famous Players and Paramount thought lost for decades. Cobbled together from an incomplete British Film Institute print and a Cinémathèque Francaise nitrate copy, this dazzling restoration has a sharp image with reconstructed tints and spare intertitles.

The story derives from a 19th century novel by George Sand, the scandalous French woman who wore men’s clothes and adapted a male pseudonym; there had been at least one previous film version of this popular book in 1912. Intriguingly, the script by director James Kirkwood and early screenwriting powerhouse Frances Marion departs from Sand’s story in ways that only emphasize the rambunctious, aggressive and tomboy-ish nature of the heroine while minimizing the importance of the male characters. But then, Sand never imagined she was writing a future Pickford vehicle.

Taking place almost entirely in various lush forest locales, as if set in Arden or perhaps even Eden, the story concerns a group of merry young rustics who do nothing with their time but stage picnics and dance around maypoles. For variety, there’s a picturesque rocky beach nearby and a stream crossed by planks. The sundry locations provide eye-catching interest and keep refreshing a film in which, for long stretches, not much happens.

Among these woodsy yokels, Fanchon (Pickford) is by far the woodsiest because she lives literally in the woods with her crotchety, semi-witchy grandmother (Gertrude Norman). They’re socially shunned, probably because (it’s implied) both Fanchon and her late mother were illegitimate, and Fanchon is consequently something of a wild forest animal.

She thinks nothing of throwing rocks at the snooty folks or mocking them, and she’s equally forward about thrusting herself into their company and making a nuisance of herself, though she often charms the crowd by sheer force of personality, like a talented raccoon. Only when she’s alone, or rather staged as separate from the others by planes by greenery, can we recognize her yearning to be accepted.

For some reason, she sets her cap — actually her hair flows wild and free until she affects a pretentious chapeau — for an unprepossessing and wishy-washy lunk named Landry (Jack Standing), who’s already got an understanding with popular Madelon (Lottie Pickford, Mary’s younger sister). Their trivial backing and forthing fills out the flimsily plotted 75-minutes, just long enough for us to enjoy Edward Wynard’s scenic photography and the story’s fresh simple characterizations, which include turns from our hero’s half-witted brother (Richard Lee) and from a young man who gets the worst of a physical scrap with Fanchon.

That young man is Mary’s younger brother Tom Pickford, making this the only film in which the three Pickfords shared space on screen. Perhaps we shouldn’t mention it, since the liner notes don’t, but Wikipedia’s entry on the film indicates some controversial claims that Milton Berle (who would have been about seven) and teenage Fred and Adele Astaire appeared in the film, although the Astaires at least denied it. We see no evidence of them among the extras.

Kirkwood, father of the James Kirkwood who wrote A Chorus Line, worked with Pickford several times, and this film provides evidence of a competent pictorialist who kept the pace steady and the incidents engaging; his prolific directing career didn’t extend beyond 1919. The liner notes indicate that Pickford and Kirkwood were lovers at this time, while Pickford was separating from husband Owen Moore and before she met and married Douglas Fairbanks.

Ten years later, a rambunctious and athletic Pickford is still throwing rocks in Little Annie Rooney, shot on a huge impressive set intended to represent New York’s Lower East Side. Photographers Charles Rosher and Hal Mohr make a point of displaying the magnificently created setting in the establishing shots. The milieu is depicted as a multi-cultural melange in which many ethnic types and first-generation immigrants mingle in the same tenements and streets, with prominent parts for a “comical” African-American boy and his mother; a Jewish boy and his orthodox family; a Chinese boy and his laundry-owning family; Greek characters who get their own linguistic intertitles; and an Italian fruit merchant with his horse, all of whom look for support from Annie’s jovial Irish cop of a father.

This image had been popularized since Richard Outcault’s 1890s newspaper cartoon Hogan’s Alley, which is more or less the first American comic strip and introduced the Yellow Kid (a little Irish boy named Micky Dugan). This neighborhood of stereotyped kids featured scraps and disasters and other lavish, complexly illustrated adventures that probably influenced Hal Roach’s Our Gang series of kid-centered comedy films that began in 1922. Therefore, Little Annie Rooney was working within an established cultural vision that used stereotypes to convey a celebration of America’s “melting pot”.

The title comes from a popular song of the late 19th Century. The film doesn’t illustrate the song; rather, the characters are aware of it, and Annie’s gang fights the Kelly gang because people mock her with the song. Pickford herself wrote the screenplay under the pseudonym Catherine Hennessey (her grandmother’s name). The story perfectly reflects the amalgam nature patented by silent Hollywood: a little comedy, a little pathos, a little excitement, a little romance, all swirled evenly into a package with something for everyone.

When she’s not throwing bricks in neighborhood donnybrooks, Annie keeps house for her adored policeman father (Walter James) and older brother (Gordon Griffith). The film never makes Annie’s age clear, so she might be anywhere from around 12 to almost marriageable, thus making it not too outlandish that she makes goo-goo eyes at young layabout Joe Kelly (William Haines), whom she says she might want to marry when she grows up. At just over five feet tall, Pickford is sometimes staged with oversized chairs and furniture with a spotlight on her face.

Without going into the story in detail, we’ll just say the last half of Little Annie Rooney involves its fair share of tragedy and melodrama, all of which is delivered with the head-on sincerity and honest tear-jerking that silent Hollywood had learned to fake so well. If the first half seems overfull of slapstick nonsense amid children, it’s to set us up for the wringer we’ll be put through later, and the narrative structure delivers a nice return to the concept of the rival gangs, now in a different context.

We might call such a film “corny”, but anyone who thinks this emotional directness doesn’t still pack a punch after 90 years is not letting the power of silent cinema works its magic tendrils into their brain. When you see a silent classic in sparkling clarity such as this, the combined sophisticated artistry at the service of emotional simplicity does a number on you, no matter how many modern barriers you try to throw up against it. 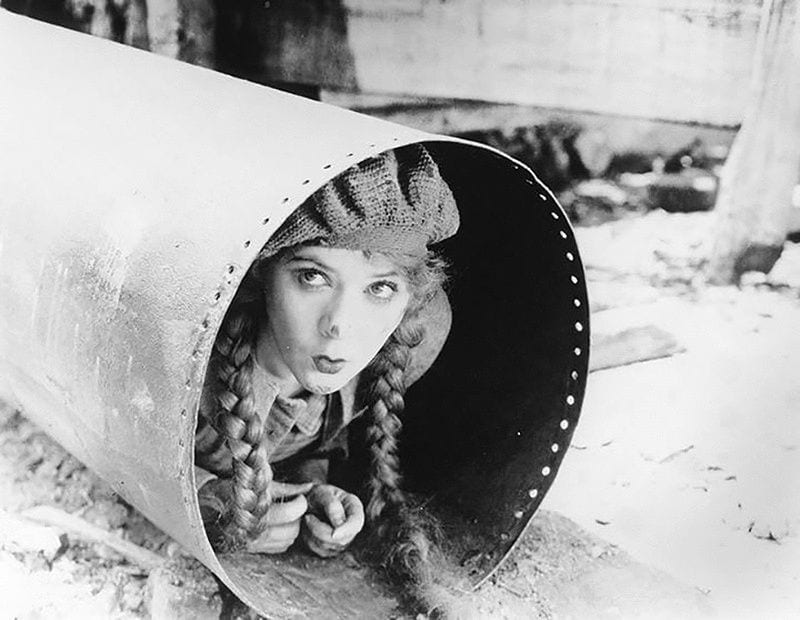 Prolific and protean director William Beaudine knows his business. He would also helm Pickford’s equally popular orphan-waif hit of the following year, Sparrows. That, however, would be a less positive experience for him and he never worked with Pickford again.

One of Pickford’s United Artists productions and a huge hit, Little Annie Rooney was a breakthrough for Haines, who spent a few years as a popular and devilishly handsome leading man until, rather than tailor his homosexual lifestyle to suit MGM boss Louis B. Mayer, he decided to quit acting and start a successful business as an interior decorator.

The liner notes also tell the fascinating story that Haines stepped into the role after the actor whom Pickford had previously cast proved too unskilled, and rather than cast a shadow over his career by firing him, she put out the publicity story that he’d broken his arm and posed with him in his cast. This tells us much about Pickford and how she used her power; business sense and a sense of fairness and consideration don’t always find a comfortable home together.

Fanchon the Cricket has been scored with a modernist “ambient” perspective. The score for Little Annie Rooney bridges the old-fashioned with more modern timbres and colors very effectively, and the disc has a short bonus about the music. For some reason, the packages don’t list the correct running times. The 75-minute Fanchon the Cricket is claimed at 115 minutes, though there’s hardly enough action for the 75. Little Annie Rooney supposedly runs 114, yet it’s really about 96 minutes.