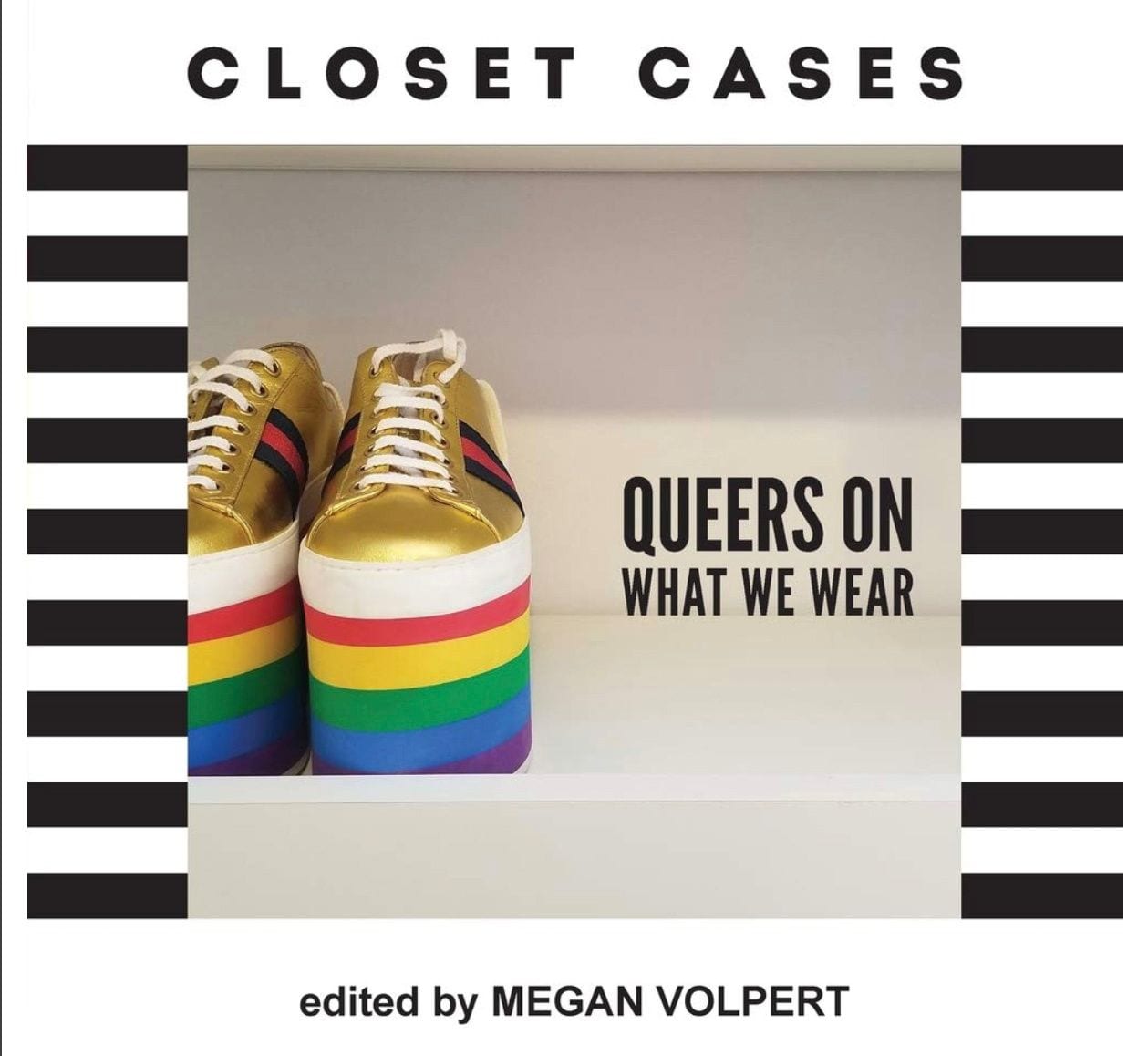 Central to Closet Cases: Queers on What We Wear is that we are what we wear. The identities we project and the identities we aspire to are communicated to others through our choices in self-presentation. Each of the 75 people featured in Closet Cases conscientiously decides what to wear because their clothes, jewelry, scarves, and shoes — oh, especially shoes — make a statement.

With its perfect 8.5″ x 8.5″ square design and dynamic, art quality photographs, it would be easy to consider Closet Cases as a coffee table book. But coffee table books are delightful to thumb through solely for their visual appeal, and typically don’t include engaging personal essays like those that complement each photograph in Closet Cases.

In “A Brief History of My Underwear”, Gerard Wozek reflects on his mother’s belief that he should always wear impeccably clean white underwear, rendered in the washing machine to be as chemically perfect white as possible. Her devotion to those traditional boy briefs was so serious that a six-pack of Fruit of the Loom underwear was the standard gift, from birthdays to Christmas.

Coming out for Wozek meant acknowledging his desire for something more adventurous than plain boy briefs. Wozek describes his many phases of trying out colors and styles of underwear as he becomes more comfortable with his sexuality. Eventually, and gleefully, he recognizes his own “queer-identified obsession” with men’s underwear. “No one will ever find bleach in my laundry basket,” Wozek concludes. “I prefer to wear the rainbow.”

Max Voltage, a genderqueer musician, writes “My Gender Is”, a rich and rambling list of clothes, accessories, and identities. Like Wozek, Voltage savors the expressive and the extreme, “plaid on plaid on plaid” and “infinity scarf made of recycled sweaters”. Gender binaries are crushed with Max’s “matching nail polish and bow tie” as well as “eyeliner and glitter beards”.

Voltage’s biographical statement says that they are a member of “Turnback Boyz, a time-traveling queer boyband, where they play ‘Peter Pansy’, a glam-dandy fiddler from the future.” Max is a classically trained violinist, blending their “artistic sensibilities and radical politics” in a musical and fashion fusion. The photo accompanying Max’s writing shows them wearing a bright flowered shirt and traditional pinstripe pants with suspenders, bow braced against the violin.

Similarly, Ben Pechey describes how dressing as a non-binary person “makes you feel light and joyous”, as is clear in the accompanying photo. Pechey wears a swaying black dress with pink flowers and matching pink heels with pointed tips. Their face shows the joy they describe, captured in a full, open-mouthed laugh. Of note is Pechy’s assertion that their intent is not to make a political statement or to cause a reaction but rather to simply have fun. Their biography notes that “growing up, they never saw or knew anybody like themself. Now they are incredibly comfortable with who they are and are visibly present in society.”

Indeed, strong thread that runs through Closet Cases is the level of comfort and celebration of self that Pechey describes. Being able to inspire other gender nonconforming folx to wear what they want and enjoy their self-presentation is another theme that resonates throughout.

The youngest among the individuals featured is 12-year-old Desmond Napoles, also known by the stage name Desmond is Amazing. He was inspired by RuPaul’s Drag Race before he began kindergarten, and according to his website, appeared on the show when he was seven. “I believe there is no wrong way to do drag,” he says, noting that “anything has the potential to be a really fab outfit.” In his photograph, Desmond’s exaggerated eyelashes and over-the-top face paint recall Twiggy’s 1960s sensibilities.

Tig Kashala writes that “as a costume designer, I’ve always been drawn to fabrics as a way to create characters and portraits–playing with contrast and unity.” This sensibility informs their own fashion as well, saying that although their style is not intended to be a statement, it seems to make a statement nonetheless. “I carry my queer on the soles of my feet and I walk with purpose.”

Mindy Dawn Friedman writes about her love of bowties, which she sees as subverting the gender paradigm of fashion. She recalls her awe of seeing a photograph of Marlene Dietrich in a bow tie and top hat, an image that clearly serves as an inspiration.

Although Closet Cases is not necessarily a fashion book, many of the people featured, like the aforementioned Tig Kashala, have some relationship to the fashion industry. Friedman’s “bold fashion transgressions have graced the runway at New York Fashion week.” She considers herself to be a “visual activist”, a term likely to be embraced by many of those included in Closet Cases.

Uzo Ejikeme writes that “the queer community thrives on authenticity; therefore, it is equally important for us to use fashion to express our identity, which we hold so dear.”

Like all of the individuals in Closet Cases, Ejkeme shows that fashion is a verb for the LGBTQ+ community, using style and artifacts to build a self-image that is both a statement and a truth. This book celebrates that sensibility, creating a sense of joy in self-expression.