It’s a Friday night in San Francisco’s Mission Bay District, not historically known as a happening area for nightlife in The City. But the industrial area sandwiched between the San Francisco Giants’ majestic waterfront ballpark to the north and the largely undeveloped Dog Patch district to the south is now home of the Golden State Warriors’ new arena. The inaugural event at the Chase Center isn’t a basketball game though, it’s hometown heroes Metallica getting ready to throw down with the San Francisco Symphony for a historic concert blending the disparate worlds of heavy metal and classical music.

Metallica destroyed the Giants’ ballpark with their electrifying performance at the Band Together Bay Area benefit show in November 2017 to raise disaster relief money in the wake of the horrid Napa/Sonoma fires that fall, so it certainly seems appropriate for the heavy metal heroes to kick things off here at the new arena. There’s a significant curiosity factor as many fans hoof it in from the area near the ballpark, because there’s nowhere to park around the Chase Center. There’s also next to nothing in the way of bars or restaurants to pregame at, making the Chase Center seem like an odd mirage of sorts.

The east side of the arena does sit practically right on San Francisco Bay though, providing scenic views of Oakland and the East Bay. The neighborhood will probably catch up in a few years, like how downtown Los Angeles grew from slumming to happening after the Lakers moved from the west side to the Staples Center. There’s no distractions tonight, just 18,000 Metallica fans eager to see the band ring in the new arena in only their second ever symphonic team-up, with these “S&M 2” shows honoring the 20-year anniversary of the band’s shows with the SF Symphony in 1999. But while those took place at the much smaller Berkeley Community Theater, this show supersizes the event to arena-size. 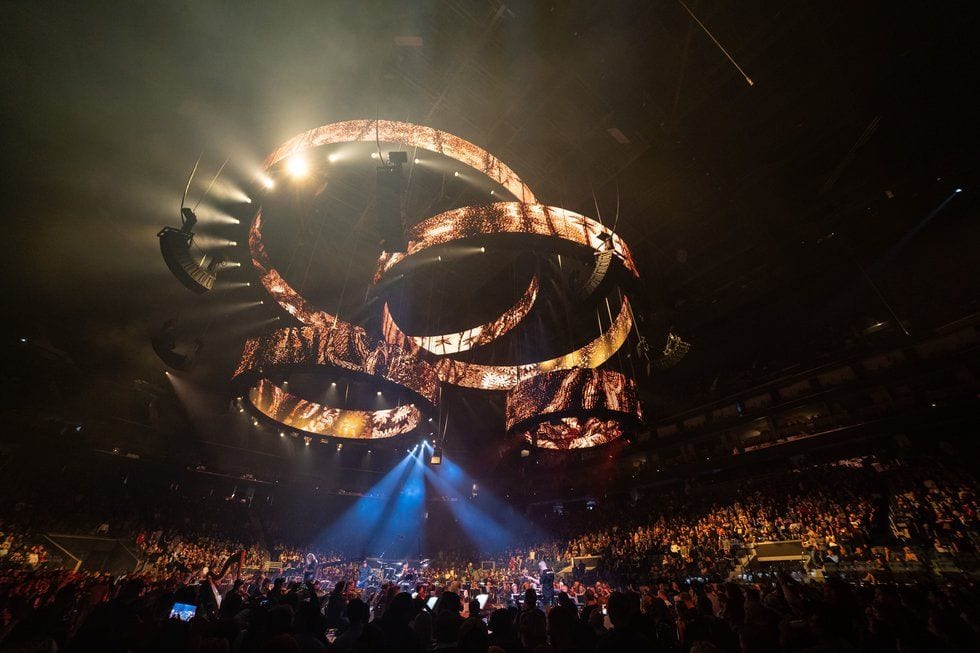 The Chase Center is billed to feature some appealing regional culinary options, and it seems like it might be so when fans sight a Magnolia Brewing outlet in the upper level. The Haight-Ashbury based brewpub is known as one of San Francisco’s finest. However, this outlet disappoints with very standard arena-style chicken tenders rather than bistro quality and only two Magnolia beer offerings (the Proving Ground IPA and Dubs Golden Ale.) The arena looks pretty cool from the outside, but the big question is, how will the acoustics sound? And will this be a typical Metallica rager or possibly a sit-down show due to the symphonic element?

The Symphony opens the show with Ennio Morricone’s “The Ecstasy of Gold” theme from classic spaghetti western The Good, The Bad and the Ugly, as the four members of Metallica enter the arena like heavyweight boxers ambling toward the ring for a title fight (in this case a stage in the round). The theme segues perfectly into “The Call of Ktulu”, a beloved deep cut from the band’s classic 1984 Ride the Lightning album. It works like magic here, as the cinematic vibe grows in epic stature on one of the band’s best-suited songs for symphonic enhancement. Music Director Michael Tilson Thomas has done his homework to make this work so well. It’s a testament to how cool it can be to mix genres to create new dimensions in sound. Lead guitarist Kirk Hammett slays a molten solo that takes on an extra dimension with the string section backing him, and it’s clear this will be a special night in Metallica history. 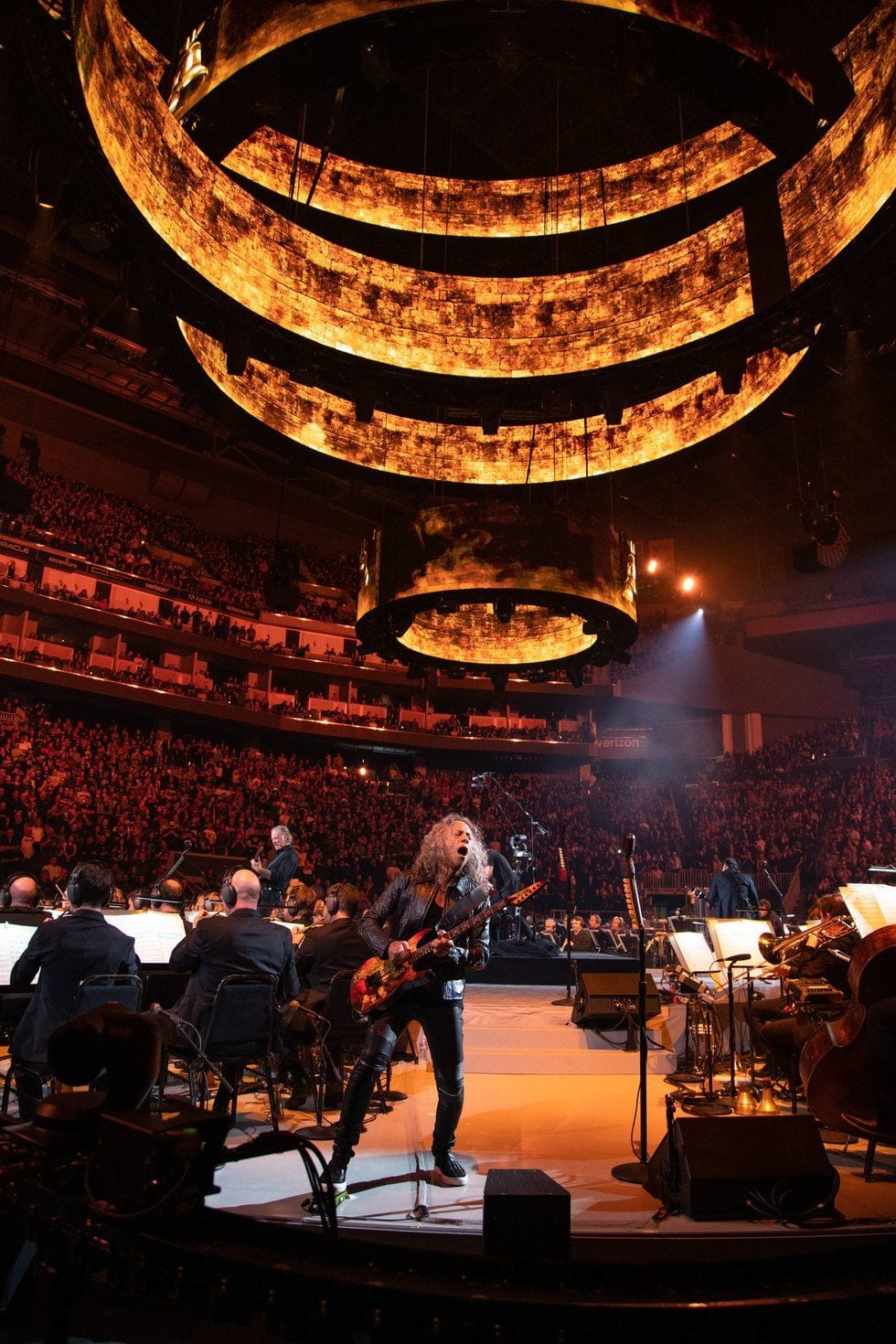 The energy surges with an electrifying rendition of “For Whom the Bell Tolls”, sending the crowd into elation although somewhat tempered by the cinematic vibe that the symphony adds to the sound. The upper deck is angled steeply for better game viewing, so this perhaps contributes to the audience staying mostly seated even as they bang heads and pump fists. As to the acoustics, it’s tough to gauge from up here. Mixing the sonic frequencies of heavy metal with a symphony is a challenge in even the best of acoustic spaces, much less a cavernous arena. At times, the volume of the band seems to wash out the symphony to some extent. It, therefore, becomes the reporter’s duty to sneak down to the lower level to see how the sound and vibe might improve.

The sound is indeed clearer downstairs, and the visual projections on the circular lighting risers that hover over the stage like almost like flying saucers take on a greater impact as well. The most dramatic difference, however, is that the fans are standing instead of sitting, and so the show takes on a more rocking vibe all the way around. The rest of the first set proceeds in somewhat arcane fashion as Metallica utilizes more obscure and recent material that might perhaps blend better with the symphony than the classics from their first five albums. Singer/guitarist James Hetfield shines on “The Outlaw Torn”, delivering a powerful vocal that gets a boost from the symphony to make it feel like it could be a soundtrack number in a Clint Eastwood flick. “No Leaf Clover” is, in fact, a song that was written for the band’s performance with the symphony in 1999, and the ensemble delivers a dynamic performance here. 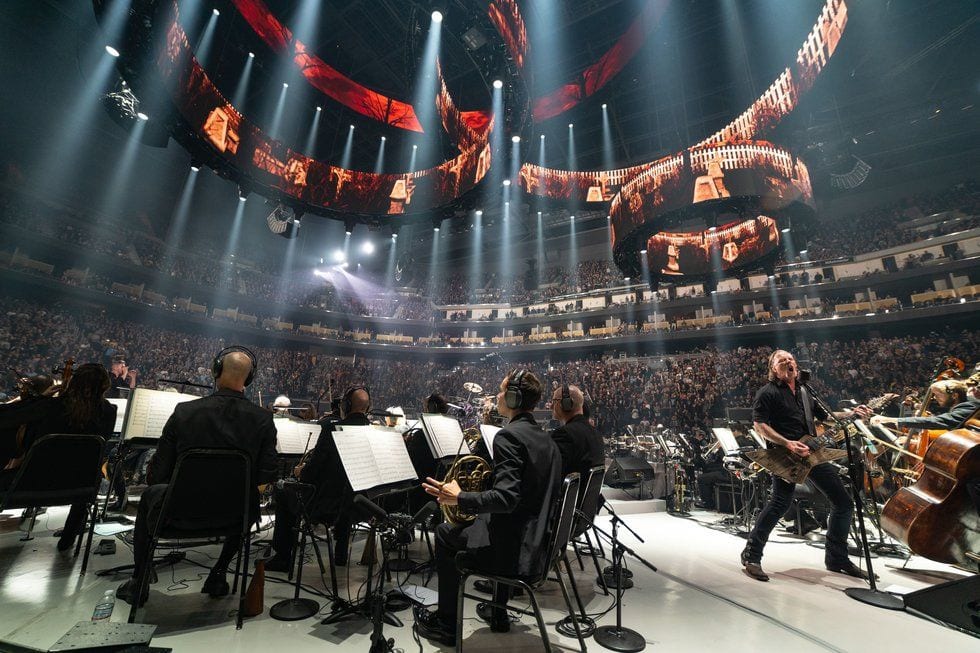 The second set also opens with the Symphony on their own for “Scythian Suite” before Metallica joins in for “Iron Foundry” from Russian composer Alexander Mosolov, blending avant-garde and metal for a unique vibe. An extra special moment occurs when the Symphony’s bass player Scott Pingel pays homage to Metallica’s late great original bassist Cliff Burton by playing an upright electric bass solo with a bow that utilizes elements of of Burton’s “(Anasthesia) Pulling Teeth” from the band’s 1983 debut album Kill Em All. The performance has the audience mesmerized when Metallica drummer Lars Ulrich joins Pingel to form a crowd-pleasing dynamic duo.

The most epic part of the show then takes place down the stretch as Metallica delivers a smashing sequence of fan favorites starting with the galloping “Wherever I May Roam”, which then gives way to the anti-war classic “One” for symphonic metal magic of the highest order. With the song being long associated with its 1988 video that used footage from the 1971 film Johnny Got His Gun, the addition of an orchestra seems ordained. The furious outro is one for the ages with Ulrich and bassist Robert Trujillo laying down the brutal rhythm while Hetfield and Hammett use their guitars like swords of sound as the orchestra adds more of that extra cinematic flair. 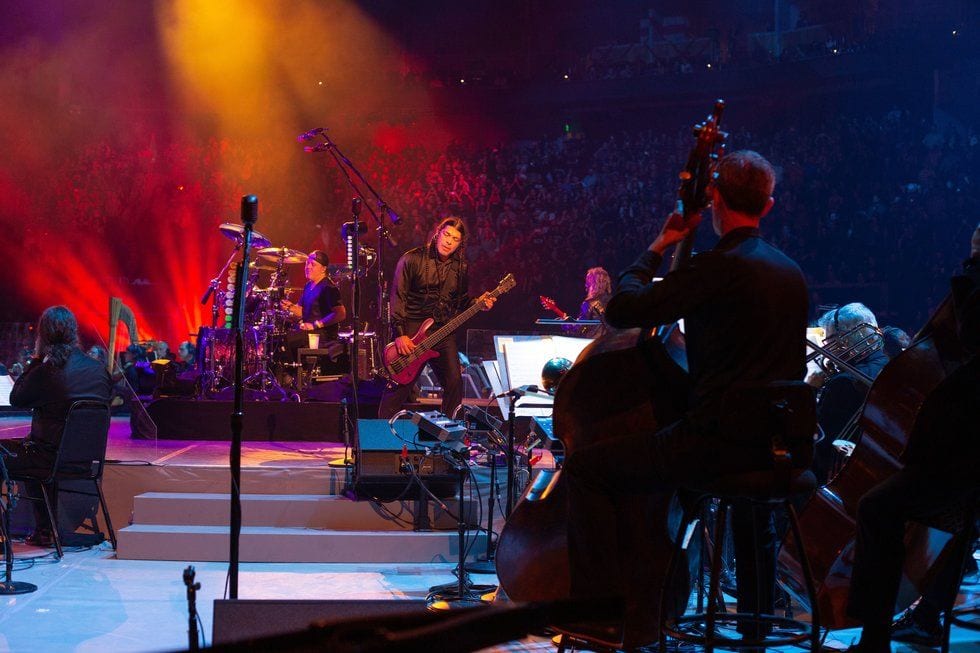 A scintillating performance of the classic “Master of Puppets” sends the audience into a frenzy to keep the vibe at a peak level. Easily one of the greatest anti-drug songs ever written, this metal masterpiece benefits most excellently from the symphonic backing. The monumental vibe surges still higher with what sounds like the entire audience singing out on the choruses for one of 2019’s most electrifying musical moments. Hammett rips a molten solo while Ulrich, Hetfield and Trujillo absolutely crush the outro jam with the symphony adding sensational complements that teenage metalheads never dreamed of while headbanging to the song in 1986.

“Nothing Else Matters” brings things back down a notch, but it’s a tune ripe for symphonic enhancement that gives Hetfield’s melodramatic vocal an extra dimension. The band then brings the show to a grand conclusion with “Enter Sandman”, a hard hitting tune that has plenty of space for the symphony to add dramatic enhancements to create a most compelling sonic landscape.

It’s been a truly triumphant night of music, with the event also helping to fight homelessness as a portion of the proceeds goes to help the Hamilton Families organization and All Within My Hands Foundation that work locally to end family homelessness. The feeling at the end of the show isn’t quite the same as the electrifying catharsis that took place two years ago when the band rocked 40,000-plus at the Band Together Bay Area benefit show, but this has been a special show in its own way and it’s nice to see Metallica again giving something back to the local community here. 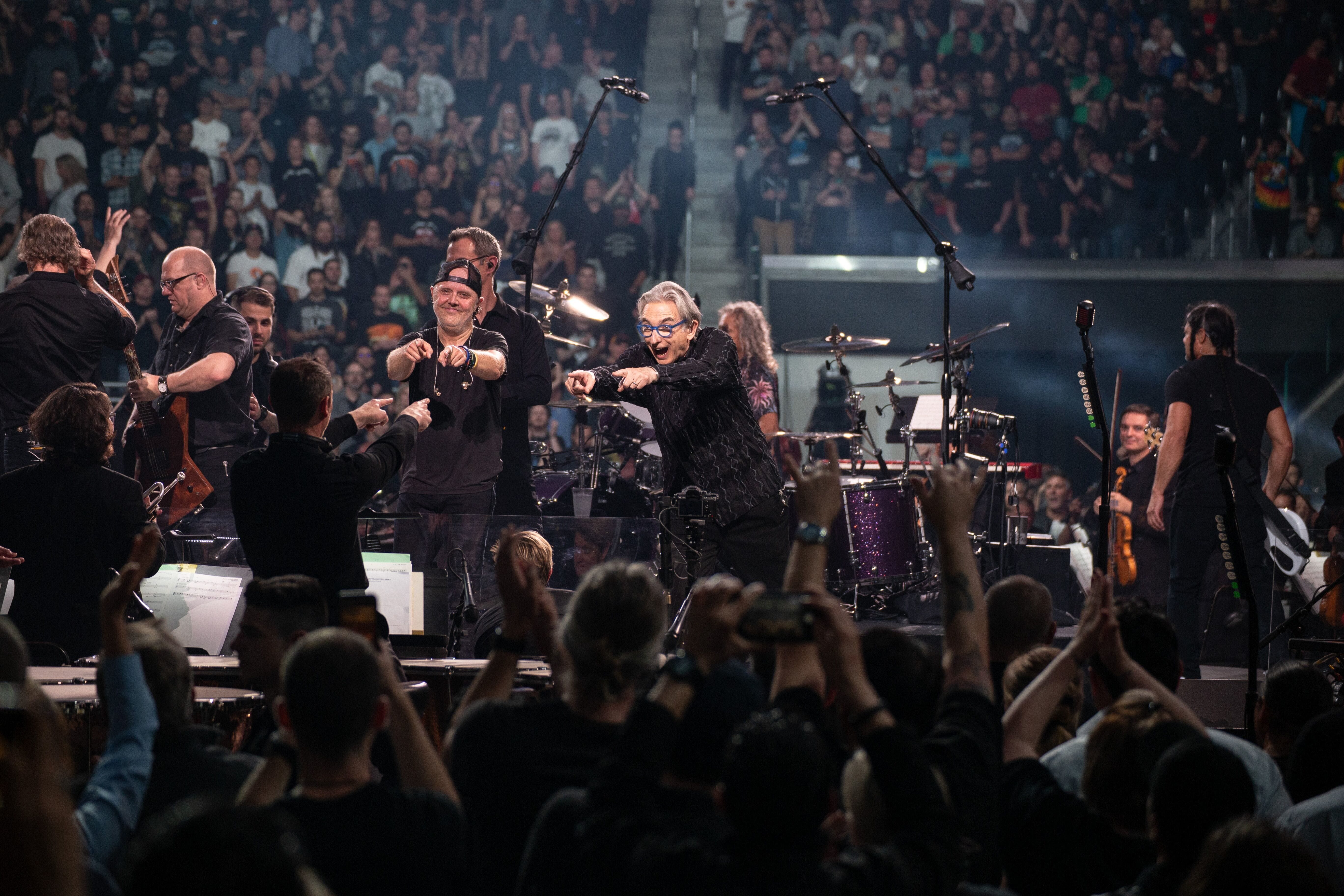