“So what if he is mediocre?” mused Hruska. “There are a lot of mediocre judges and people and lawyers. They are entitled to a little representation, aren’t they?”

Hruska’s logic was not persuasive, and the Senate refused to confirm Carswell. While mediocre people may not feel their mediocrity is represented at the highest levels of justice, they have had plenty of representation on television, as unintelligent characters have been a staple of American comedy. The three sitcoms Michael Schur has created—Parks and Recreation, Brooklyn Nine-Nine, and The Good Place—feature several characters in this tradition, but Schur’s television communities manage to embrace their incompetent peers with more warmth than poor ol’ G. Harold Carswell must have felt.

Schur co-created Parks and Recreation with Greg Daniels after the two worked together on The Office, which Daniels adapted for NBC. The two sitcoms share not only a pedigree, but also a mockumentary style and comedic sensibility. From Parks and Recreation‘s debut, Amy Poehler’s Leslie Knope looked a lot like a female version of Steve Carrell’s Michael Scott, who had looked a lot like an American version of Ricky Gervais’s David Brent in the BBC original. Their defining characteristic was their mediocrity; these were bosses whose positions had outstripped their abilities, a relatable waking nightmare for white collar cubicle dwellers and Anytown, U.S.A., bureaucrats alike. Scott, modeled after Brent, was an imbecile, and the mockumentary cameras only exacerbated his ego-fueled idiocy. Given so many more seasons than the UK original, Scott gradually won over the hearts of both his employees and the show’s audience even as he occasionally demonstrated himself to be a bit better at his job than expected.

While Scott’s evolution was a classic case of a television character mellowing over time (The Mary Tyler Moore Show‘s Lou Grant is the archetype for this transformation), Knope’s character shift was a clear course-correction after Parks and Recreations‘s dreary first season. Season one’s Knope was a dope—an overly enthusiastic assistant who lacked both the authority and wisdom to fill in a giant pit in a small Indiana town. The genius of the series emerged in season two as Daniels and Schur realized it was far more interesting to watch a competent (if still quirky) woman navigate and occasionally conquer a flawed system in a world of morons. Knope’s Parks Department is far from mediocre. As far as we can tell, she makes it the best department in the city government, and far better than the town’s dumb citizens deserve. 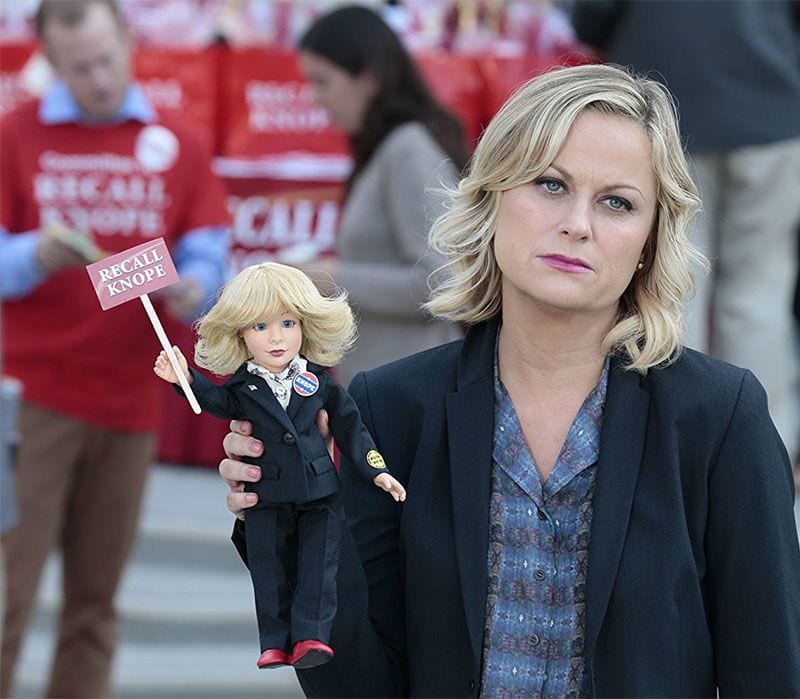 In retrospect, one performance hits the ground running in Parks and Recreation‘s season one. It’s not Nick Offerman’s Ron Swanson, though you can spot flashes of his character’s meme-ability. It’s not Aziz Ansari’s Tom Haverford who, from a post-#MeToo vantage point, is more creepy than funny in the first season. Later, Haverford becomes funnier as reaches the levels of unearned over-confidence previously displayed by David Brent and Michael Scott. Rashida Jones doesn’t earn many laughs as the comedic Straight Woman, Ann Perkins, in season one. Aubrey Plaza’s April Ludgate merely lurks around those early episodes, while supporting performers Retta and Jim O’Heir barely speak. Paul Schneider’s Mark Brendanawicz definitely does not hit the ground running. He just hits the ground.

Chris Pratt’s lovable simpleton Andy Dwyer saves the first season. I would be lying if I said I knew back in 2009 that Pratt would go on to star in two of the most lucrative Hollywood franchises of the 2010s, but the character, and perhaps even the show, does not take off without Pratt’s likability. Pratt is not a comedic genius on the level of Poehler, Ansari, and the rest of the show’s cast, but he is at least their peer in charisma. He is an on-screen ball of energy even while he spends the entire first season with both legs in casts. 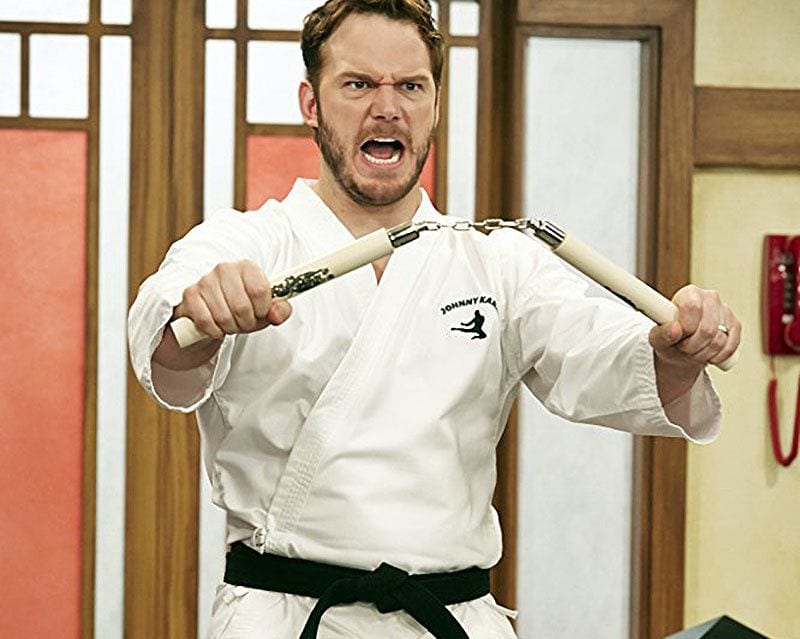 The pit that becomes Knope’s nemesis is to blame for those injuries. The hapless Dwyer fell in when, drunk after a night of performing with his band, he thought he spotted a toaster at the bottom of the pit. Later, when his then-girlfriend, Perkins, chastises him for being drunk, Dwyer retorts, “Like you’re perfect! You’re on the pill!” Dwyer blathers all of this during an interview arranged to drum up support for filling in the pit (season one, episode three, “The Reporter”). Dwyer’s incompetence thus incites season one’s arc and serves as a frequent complication from episode to episode—a fairly typical way to use a dumb television character. But as with all of his fellow characters on Parks and Rec, Dwyer develops more complexity as the story moves along.

By season two, no longer dating Perkins, he is living in the pit, though he quickly becomes a loyal friend to the rest of the cast of characters. With a bit of grit, he finally finds some success shining shoes at City Hall. Ludgate starts to fall in love with him, as his childlike innocence and enthusiasm runs refreshingly counter to her own sarcastic detachment. Schur must have liked what he had helped create in Andy Dwyer, because he built his next television series around another Andy with very similar qualities. 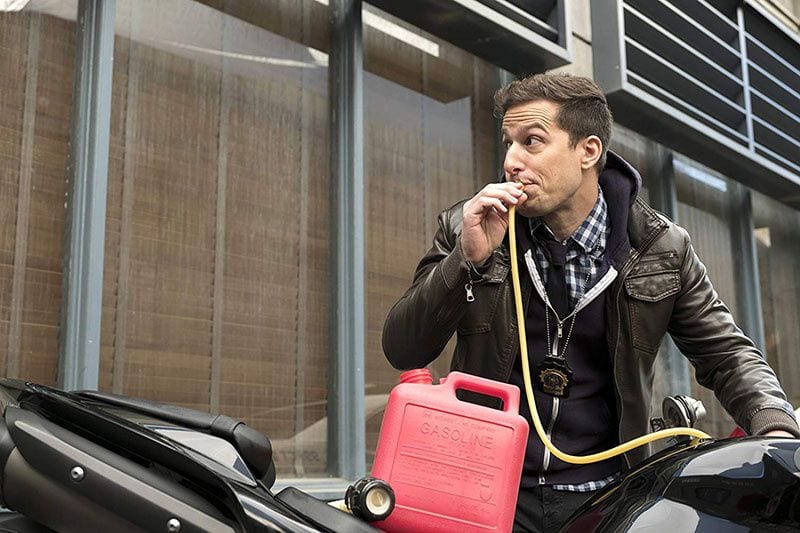 The central character in Brooklyn Nine-Nine is the lovably childish detective, Jake Peralta, played by Andy Sandberg, a comedian who has built his career playing lovably childish characters. Schur seems to have learned something from Parks and Recreation‘s debut season, as all of Brooklyn Nine-Nine‘s characters are very good at their jobs. Peralta’s weakness is his immaturity, not his lack of intelligence. Still, he is more street smart than book smart, and he is comically clueless when he encounters some of the highbrow tastes of his boss and co-workers. Both the institution within which Peralta works and the community which he serves can be dumb, but that’s not the defining theme of the show as it was in Parks and Recreation. The titular precinct in Brooklyn Nine-Nine is made up of a diverse group of people, each with his or her own set of flaws and strengths. The show repeatedly demonstrates how the familial love of the people in that precinct allow the whole to be much stronger than the sum of its parts. Thus, though Brooklyn Nine-Nine lacks the clever layering of socially relevant satire present in Schur’s two other shows, it has grown to become a consistent rebuke to the divisiveness of Trumpism.

There are two mediocre exceptions to the otherwise savvy group of police that work in the 99th precinct. Detectives Hitchcock (Dirk Blocker) and Scully (Joel McKinnon Miller) are lazy desk jockeys less renowned for solving cases than they are for consuming food and sneaking naps. They are direct descendants of Kevin Malone (Brian Baumgartner), The Office‘s own bald, stocky hedonist. Hitchcock and Scully are occasionally helpful on a case, especially when their particular strengths are unexpectedly useful. For example, being duct taped to a chair is no problem for the duo, as Hitchcock is extremely deft on a rolling office chair, even when he has to go up a flight of stairs. Meanwhile, Scully’s ample quantities of sweat quickly wear out the tape’s adhesion (season three, episode 16, “Mouse Houses”). Despite their ostensible uselessness, Hitchcock and Scully’s peers accept them as part of the team and thus give them occasional opportunities to contribute in the rare moments that fit their unique sets of skills. 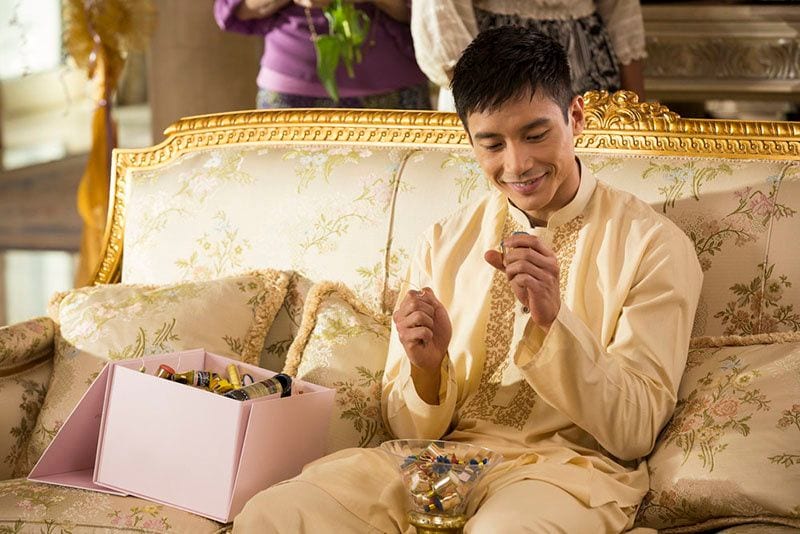 Hitchcock and Scully are very dumb, but the stupidest character in all of Schur’s shows (and thus, a strong contender for the dumbest person in television history) is without question Jason Mendoza (Manny Jacinto) in The Good Place. Mendoza is so dumb, his DJ name was Mr. Music, the DJ. (“I wasn’t a failed DJ. I was pre-successful.”) He is so dumb, oranges confuse him. (“They don’t make sense. Apples you eat their clothes, but oranges you don’t?”) He is so dumb, he is barely even aware he died and went to the Bad Place. (“I have no idea what’s going on right now but everyone else is talking and I think I should too!”)

The bumbling humor of these characters—from Kevin Malone to Andy Dwyer, from Hitchcock and Scully to Mendoza—is directly descended from the man who was not the first but is certainly the greatest of all TV morons, Homer Simpson. However, one important characteristic separates Mendoza from these other idiots; he lacks their inherent charm and lovability. That Mendoza is (or, rather, was) an inherently bad person is fundamental to The Good Place. Even as the show’s four flawed humans try to pull a reverse-Walter White and earn access to the real Good Place, flashbacks and lingering imperfections remind us of their badness. In a further contradiction to the value Schur’s other sitcoms found in their stupidest characters, Mendoza’s low intelligence is largely responsible for his ethical failings. He was too dim to be good. Now accidentally given a chance for growth after death, he occasionally contributes an original thought or a kindness to his friends, but he is helpful about as often as a stopped clock. Credit is due to the show’s writers and Jacinto’s performance for making Mendoza a likable television presence even though the character is not a very lovable being.

Despite Mendoza’s failure to contribute either intelligence or decency to their little society, his fellow humans keep him around as they carry on in their impossible quest for the Good Place. Why? For a show about what it means to be human, the characters recognize and cherish their shared humanity in an afterlife that has thus far been populated mainly with demons. The series began with Mendoza and three other humans moving into the same posthumous neighborhood. While their ethical growth has been inconsistent, they have loved their neighbors.

The family, whether bound by blood or created from shared circumstance, remains the central social construct of scripted television. The longer comedies run, the more their characters settle into an equilibrium of fondness for one another. On network television, familiarity breeds the opposite of contempt. This is part of television’s power at building real-world social acceptance for previously under-represented and/or oppressed groups. I’m not suggesting that Schur’s shows have done for mediocrities what Will & Grace did for the LGBTQ community. But at the very least, Schur subtly yet consistently reminds us to look beyond the typical constructs when we assess the value of our fellow human beings. Furthermore, as the adventures in The Good Place continue to demonstrate the inherent ridiculousness of a Good Place/Bad Place system, maybe thinking about human beings in terms of their value is one of humanity’s greatest flaws. All of Schur’s characters become valuable when they are first allowed simply to be.