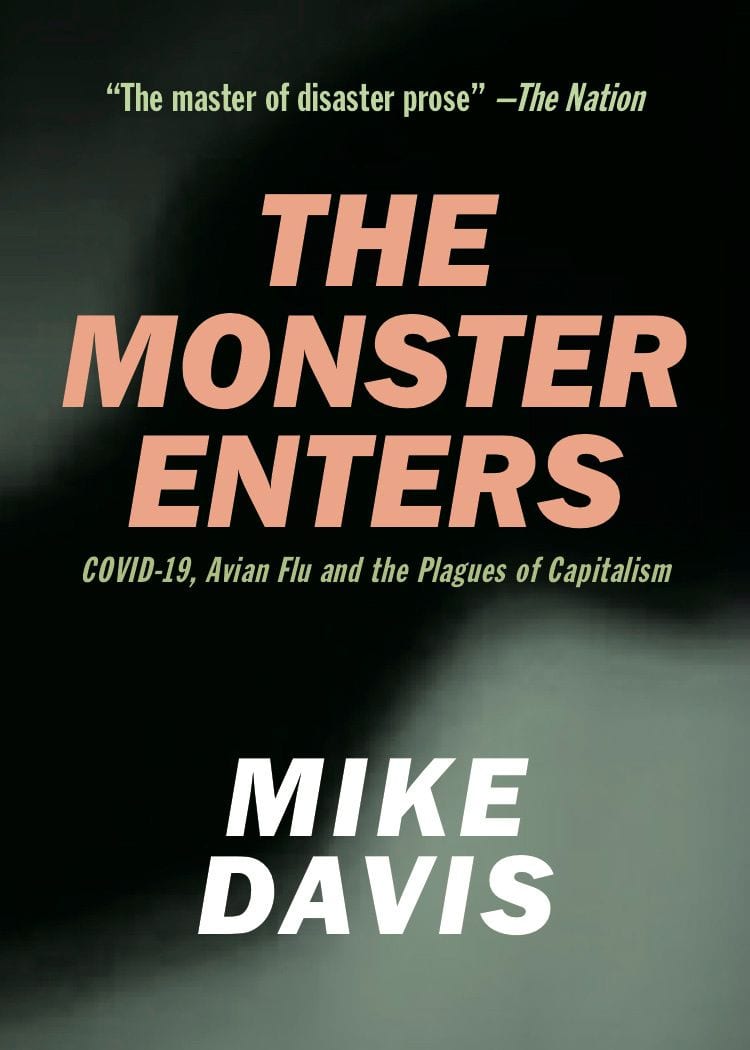 The Monster Enters: Covid-19, Avian Flu, and the Plagues of Capitalism
Mike Davis
OR

When Mike Davis published the first version of The Monster Enters: Covid-19, Avian Flu, and the Plagues of Capitalism 15 years ago, the titular “monster” was influenza, particularly the avian flus emerging in Asia and the Middle East. In the updated version, Davis turns his attention to a new and even more fearsome monster, COVID-19.

“The [Covid] pandemic, according to my current publishers, has given new relevance to my old flu Monster,” he writes. Davis, a renowned author, Marxist social critic, and activist, contextualizes the current viral plague, linking it to the 1918 influenza pandemic and to the global spread of new viruses. Although we are currently preoccupied with COVID-19 and coping with its devastating impact, Davis reminds us that we still face the threat of new influenzas. “The original flu monster, H5N1, now has even deadlier avian siblings,” he notes, citing the World Health Organization’s warning that these pathogens will be impossible to eradicate.

COVID-19 has striking similarities to two other coronaviruses, SARS (Severe Acute Respiratory Syndrome), which emerged in China in 2002, and MERS (Middle East Respiratory Syndrome), first reported in Saudi Arabia in 2012. The symptoms of all three are almost identical; mortality is high because of pneumonia; and sepsis often occurs among older and immune-compromised people. But COVID-19 differs significantly from them in at least three ways: its ability to be spread, like influenza, by asymptomatic people; it infects heart tissue; and “it is one hell of a tough nut”—the new bug has one of the hardest protective outer shells among all coronaviruses.

It’s also highly resilient and highly contagious. Although not as lethal as the viruses that cause SARS or MERS, its two percent mortality rate is comparable to that of the 1918 flu. COVID-19, Davis notes, has “the ability to infect the majority of the human race unless antiviral and vaccine development quickly come to the rescue.”

Photo by conor rabbett on Unsplash

One of the strengths of Davis’ book is his clear and accessible discussion, and with vivid imagery, of the science of COVID-19. Viruses, he explains, are basically “parasitic genes that hijack the genetic machinery of the cells they invade to make myriad copies of themselves.” DNA viruses “have a built-in proofreading mechanism to ensure replication”, but flus and coronaviruses, which are “programmed by RNA”, lack that mechanism. “As a consequence, some species are like bizarre Xerox machines, running at ultra-high speeds that constantly spit out error-ridden copies.” All these “inaccurate” copies give such viruses “a huge advantage in resisting the human immune system because inevitably there will arise copies at least partly resistant to the antibodies produced in last infections or generated by vaccination.”

Two concepts, antigenic drift and antigenic shift, are crucial to understanding how coronaviruses emerge and do their damage. The former refers to the evolution of coronaviruses through the accumulation of small mutations, which leads to new strains or subtypes. The latter—which Davis says stands “in the same relationship to drift as revolution does to reform”— involves reassortment, a process by which animal or human cells become infected by two different viruses, for example, one from wild birds and another a strain transmitted by humans. These “reassorted” viruses combine “virulence with ease of infection”.

Another commonality among the new coronaviruses is that they all are, as the book’s subtitle declares, “plagues of capitalism”.

“This new age of plagues, like previous pandemic epochs, is directly the result of economic globalization,” Davis says. “Today, as was the case when I wrote Monster fifteen years ago, multinational capital has been the driver of disease evolution”—through the burning or logging of tropical forests, factory farming, the “explosive growth of slums and concomitantly of ‘informal employment,'” and the failure of the bottom-line driven pharmaceutical industry to produce “lifeline antivirals, new-generation antibiotics, and universal vaccines”.

Forest destruction, “whether by multinationals or desperate subsistence farmers”, eliminates the barriers between people and viruses that are widespread among birds, bats, and mammals. Traditional forms of agriculture have succumbed to the spread of industrial farms and their vertical integration of production and distribution. Factory farms and giant feedlots “act as huge incubators of novel viruses” while poor sanitation in slums compromises the immune systems of their densely packed residents. Inadequate, underfunded, and in some places nonexistent public health systems exacerbate the disease burden on the impoverished people of the global South, especially in Asia and Africa.

Davis argues that the failure of global capitalism to create jobs in “the so-called developing world” means that “a billion or more subsistence workers…lack an employer link to healthcare or the income to purchase treatment from the private sector”, which leaves them dependent on collapsing public hospitals—if they even exist. “Permanent bio-protection against new plagues” would require more than vaccines—it would need to suppress these conditions “through revolutionary reforms in agriculture and urban Irving that no large capitalist state or state-capitalist country would willingly undertake.”

The synergy of poverty, capitalism, and disease, Davis writes, is nothing new—it was evident in the 1918 influenza pandemic. “Poverty, malnutrition, chronic illness, and co-infection” were “powerful determinants of the precise tax that the 1918 influenza extracted from different populations. Indeed, the global pandemic itself was really a constellation of individual epidemics, each shaped by local socioeconomic and public health conditions.” Although literature on the flu pandemic of the last century focused in the virus’ preference for young adults, “the correlation between social class and lethality in virtually every country was no less striking.”

Scientists, public health authorities, farmers, agricultural industry unions, and activist movements have sounded the alarm about the new viruses and the urgent need for coordinated, science-driven preparedness for outbreaks and responses to them. But they are arrayed against, and overmatched by mega- and multinational corporations and the politicians and heads of state who serve corporate interests.

Photo by Jamie Hagan on Unsplash

Under successive US presidents, “preparedness was a stop-and-go cycle and politicians often backtracked from their own policies.” Bill Clinton, in 1998, created a National Pharmaceutical Stockpile to deal with pandemics; in 2003, George W. Bush changed its name to the Strategic National Stockpile, removed it from the Centers for Disease Control and Prevention (CDC), where Clinton housed it, and installed it in the departments of Homeland Security (DHS) and Health and Human Services (HHS). The stockpile held 105 million N-95 respirators (masks), 100 million of which were distributed by the Obama administration during the H1N1 (swine flu) emergency in 2009. Obama, however, failed to replenish the mask stockpile, maintaining it would be cheaper to let the private sector produce them. Donald Trump’s DHS and HHS officials “were content to leave the stockpile depleted while neglecting the proposed investments in private-sector companies.”

Bush—whom Ellen Degeneres, Michelle Obama, and segments of corporate media seem intent on rehabilitating by treating him as a folksy retiree who paints pictures of dogs —gets a deserved thrashing from Davis. Instead of heeding scientists who were calling for increased production of antiviral treatment to prepare for viral outbreaks, the Bush administration “fast-tracked vaccination programs for smallpox and anthrax based on fanciful [bioterrorism] scenarios that might have embarrassed Tom Clancy.” Bush’s Project BioShield was “designed to build support for the invasion of Iraq by sowing the baseless claim that Saddam Hussein might use bioweapons against the United States.”

The main villain in the US response to COVID-19 is, of course, Donald Trump. In a section of The Monster Enters titled “The Apocalypse in Six Easy Steps”, Davis summarizes the factors that are responsible for “the catastrophic meltdown of the federal response in the first three months of the pandemic”:

• no “continuity of leadership experience from the Obama era or even from the first two years of Trump’s presidency”;

• the “shocking incompetence and poor judgment of the CDC” regarding COVID-9 test kits;

• the failure to implement early testing and detection, which made the US dependent on the “second-best approach” of flattening the curve through self-quarantining and social distancing, which Trump undermined, “leaving it to Democratic governors and mayors to try to put out the fire”;

• the lack of ample inventories of protective gear; the failure to restock the depleted National Strategic Stockpile, leaving states and cities to “forage in their own for ventilators and protective supplies”; and

• Trump’s CDC abdicating “a principle role in vaccine development”, as have the pharmaceutical industry and the World Health Organization. (Since Davis wrote that, in April 2020, Trump announced an “Operation Warp Speed” to expedite vaccine development.)

Davis’ discussion of state responses to the pandemic doesn’t stop at Washington, DC. He’s astute about China, which despite initial missteps, moved aggressively to contain the virus once authorities realized the threat it posed. Davis notes that China, and Cuba, “are the only countries currently rising to the challenge of providing significant medical aid and expertise to poorer nations.” Cuba’s “internationalist doctors” are “the reliable shock troops” in responding to disease outbreaks but “the Chinese bring in the heavy artillery— medical experts, test kits, protective gear, and other assistance.”

While acknowledging China’s achievements, however, he warns against “learning the wrong lesson” from them: “State capacity for decisive action in an emergency does not necessitate the suppression of democracy.” The pervasive presence of the Communist Party in Chinese life expedited the “total mobilization against COVID” but “this mainly confirms the critical importance of grassroots organization and preparedness, not the necessity of a police state.”

Right-wing regimes pose their own dangers; whether in Washington, DC, or elsewhere, they will “seize every opportunity, as they did with 9/11, to appropriate new authoritarian powers”. This prospect makes all the more urgent “democratic models of effective response to present and future plagues, ones that mobilize popular courage, put science in command, and use the resources of a comprehensive system of universal health coverage and public medicine.”

It’s an excellent prescription that Davis offers. But its widespread adoption seems doubtful. In his final chapter, Davis summarizes the failures of wealthy nations. In “Washington, London, and Tokyo, health ministers pay religious deference to pharmaceutical industry patents and profits while failing to provide ‘lifeline medicines’.” Governments cover up outbreaks, lie to international agencies, and threaten whistleblowers. Multinational livestock companies “have exploited the crisis to restructure poultry production to their selfish advantage.” Researchers and institutions have provided valuable assistance to local authorities, but “the overall global aid effort has been a disgrace.”

Davis ends with the monster metaphor that gives his book its title, invoking the “1950s sci-fi thrillers of my childhood” in which scientists sound an alarm about an alien threat, politicians ignore it, but ultimately “the world wakes up to the peril and unites to defeat the invader.” He wonders whether we — with a “real monster at our door”, pandemic threats to the survival of humanity — likewise will wake up in time. Given everything Davis has written in this concise, disturbing, and valuable book on the way to that conclusion, a far less happy ending seems more likely.