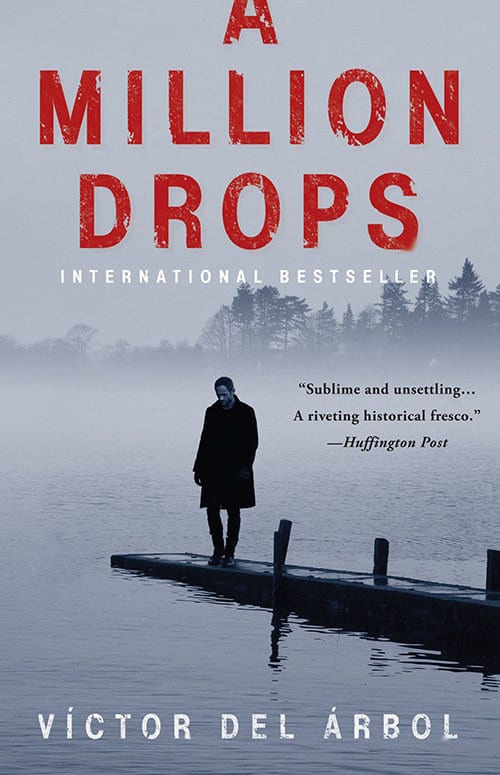 It would be incorrect to call Víctor del Árbol a Spanish Stieg Larsson. Comparisons with the celebrated Swedish writer are tedious; a disrespect to the Swede whose work as a crusading anti-fascist journalist was at least as important as his bestselling crime fiction, and a disrespect to the Spaniard, who deserves to be considered on his own terms and in the context of his own country’s complex politico-literary history.

But oh, how tempting.

A Million Drops is a mystery-thriller in the best tradition of the genre, one which offers an intricately researched historical tale while also trying to say something appreciably profound about human nature. It’s reminiscent on some levels to the work of Larsson, who also embedded stories within stories, interwove historical moments with their contemporary consequences, and was deeply concerned with misogyny and child abuse (both themes integral to Árboll’s novel as well). Larsson was more ‘woke’, let us say (he had a deeper and more well-structured analysis of misogyny and oppression) and Árbol’s tale is much darker in both the telling and the resolution, but there is a shared sensibility that may attract readers of one to the other. Larsson resisted the male gaze — a constant menace in crime fiction — more arduously in his work; it peeks out occasionally in Árbol’s but one senses his effort to rise above.

The work also shares with a growing body of Spanish literature (the work of Javier Cercas, for instance) the excavation of the Spanish civil war and subsequent fascist dictatorship as key plot devices. There’s a tendency among many recent writers to poke at this historical sore, much like the recalcitrant tongue probing with resentful fascination at a swollen, rotten tooth, and Árbol pokes at the sore relentlessly, ruthlessly, yet with impressively creative fortitude. He offers a splendidly depicted historical tale from that era, full of commentary on the epiphanies of the individual which inevitably emerge in moments of collective suffering such as revolutions and civil war.

The tale is centred around Gonzalo Gil, a 40-something lawyer of no especial renown and no notable qualities beyond his own stubborn individualism (despite the struggling status of his law business he’s determined not to give in to his successful and smarmy father-in-law’s offer of a merger). His marriage is on the rocks and at least one of his kids has reached the age of hating him. More portentously, his sister Laura — a police officer — just committed suicide, following the unsolved kidnap and murder of her young son. Or did she? The plot begins to thicken.

Set against the mystery surrounding the deaths of his sister and nephew is the tale of his own father, Elias Gil. Elias, son of a poor Communist miner, was sent to study engineering in the ’30s in the revolutionary heartland — Russia, newly under Stalinist control – -and what ensues is a gripping adventure that follows Elias through all the turmoil of European war and revolution across the first half of the 20th century. All we know at the outset of the tale is that Elias, a hero of the Spanish left, disappeared under mysterious circumstances when Gonzalo was still a young boy, and while the two plot threads play out separately, it is with a well-paced sense of dawning realization that the reader gets to see them gradually converge.

The narrative is a compelling one and hard to put down. Alternating between the 1933 (Elias) storyline and the 2002 (Gonzalo) storyline — and witnessing the two eventually converge over the course of the book’s nearly 600 pages — helps build momentum and fascination as well. The characters are well-wrought, just human enough to render them sympathetic, despite their copious foibles and faults (which at least they’re all quite honest about).

On a more prosaic level, in the ’90s storyline Gonzalo struggles to retain his own freedom as well — independence from his father-in-law’s sprawling and successful legal empire, independence in his own uncharacteristically honest approach to lawyering (he picks and chooses his cases with greater idealism than his colleagues think of a man of his limited success ought to allow himself). He’s determined to remain independent, a man of his own making, true to his own ideals, no matter how little and inconsequential a man this might make him in the ambitious and scheming eyes of those around him. He’s no angel, however: wracked by a resigned sense of guilt toward his own mediocrity, an inability to connect with his children, an ambiguous relationship with his wife — his grasping at principles in his work life resembles a last desperate effort to hold fast to a shred of pride and dignity.

Árbol constructs very human characters, who recognize their own flaws and struggle with their ideals, wrestling to reconcile the reality of their individual helplessness in the face of history with an idealistic determinism that compels them to believe there is a greater meaning to it all. Is freedom something that becomes manifest through the triumph of systems (communism, fascism, democracy)? Or through the triumph of an individual’s refusal to submit to the depersonalized cruelty of all those systems, to resist the intractability of fate and history? The book traces a determined and well realised effort to discern what constitutes the triumph of ideals in a world where the personal and the political appear both profoundly aligned in each of us and yet eternally at war with each other.

Indeed, the novel’s many twists and turns remind us we are constantly struggling on two levels: the bigger causes of which we are a part and which purport to be struggling for a greater systemic freedom for humanity; and yet no matter which of those sides we choose (communism, socialism, fascism, capitalism) we are always also engaged in a struggle for freedom on the individual level. With his vast cast of characters Árbol reminds us that two individuals might be on opposite sides of the political/ideological struggle, yet experiencing a remarkably similar struggle for personal freedom against the systemic constraints of each of their respective sides. Likewise, two protagonists of the same side might each be pitted in ruthless personal struggle against each other in the quest for personal freedom and redemption. Árbol plays with this, reminding us that the ideological struggle and the personal struggle in which we each engage are connected in complex ways; not always the same, and not always reinforcing each other. There’s an implicit question here: which matters to us more? Systemic victory at the broader ideological, political level? Or personal triumph in our individual struggles for redemption and integrity?

There’s a large cast of well-constructed characters in A Million Drops, but one in particular emerges as a surprise key protagonist, symbolizing this clash between the personal and the political: Ramon Alcazar, the hard-boiled police inspector who’d been Laura’s partner. He started his career under the Franco dictatorship and continued it through the transition to democracy. This has left him in an ambiguous position so far as the ethics of justice are concerned: goon for a criminal dictatorship in the first half of his career, and enforcer of an ostensibly more impartial and democratic justice system in the second. The question is not whether he’s corrupt, but how corrupt he is.

Indeed, what constitutes corruption under circumstances such as these? How does an individual navigate morality as the world shifts so dramatically around them? It illustrates a paradox: the individual may seem helpless in the face of broad and sweeping political change, but it is in such moments that the acts of an individual matter most. When the politics and institutional structures veer so dramatically from criminal dictatorship to democracy, as they did in Spain (and elsewhere), it’s incumbent on the individual to navigate those churning waters by establishing a sense of personal morality that makes coherent sense, regardless of these broader geopolitical changes.

Moreover, Alcazar — like all the characters in Árbol’s novel — is not a finished character, but is constantly evolving. Like Elias and Gonzalo, and all the other characters — and like all those swept up in the struggle between left and right, tyranny and freedom — the commitments we make and the ideals we subscribe to are constantly in flux. “So many men, inside the same one” writes Árbol of this seemingly simple yet in fact tremendously complex character, ostensibly a secondary character yet one who winds up playing a role of primary importance. “He was like the [Russian matryoshka] dolls Laura liked so much. The thing was, you had to have patience to get to the last one… beneath his outward cynicism and undisguised avarice, beneath his supposed lack of scruples lay the distant glimmer of the man he could have been… engaged in one last showdown between two irreconcilable sides of himself…”

A Million Drops is an exciting, ingeniously crafted tale of these struggles faced by so many over the course of the 20th century (and on into our present day). Politically ambivalent and profound at the same time, its essence is best encapsulated in the hopeful paradox from which Árbol draws his title. Early in the novel, Laura’s ex-husband Luis reflects on her obsessive pursuit of justice: “I told her that she couldn’t fight all the evil in the world by herself, that her efforts were a drop in the ocean. And you know what she said to me? ‘What is the ocean, if not a million drops?'”

That paradox – -the inconsequential role of the individual and their ability to act against fate and broader forces, set against the dramatic impact an individual can have when they choose to act — is rearticulated elsewhere in the novel in the revolutionary verse:

Hopeful, inspired words? Or fatalistic resignation? Like much of Árbol’s impressive novel, it’s up to us to choose our own interpretation.