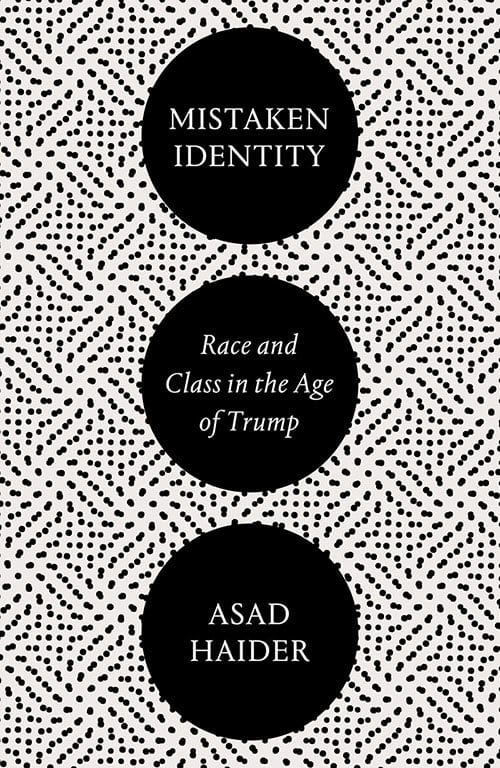 Mistaken Identity: Race and Class in the Age of Trump
Asad Haider
Verso

What we know and follow about “identity politics” is certainly dependent on our political perspective. If we believe the notion that the personal is political, we must also embrace the possibility that the private is political. Perhaps the easier way of looking at it is to conclude that everything in our lives is only “alive” once it’s politicized; the food we eat, TV shows we watch, music we play or purchase, art we produce or patronize. Though the notion of “identity politics” has only been an established ideology since approximately 1977, as a nation Americans have always made their choice of leaders and mission statements through how they perceive themselves.

In Asad Haider‘s brief yet compelling Mistaken Identity: Race and Class in the Age of Trump, the message is clear. Haider argues that we have gone too deep into the convenient comforts of identity and lost perspective of the bigger picture. “I don’t accept the Holy Trinity of ‘race, gender, and class’ as identity categories. This idea of the Holy Spirit of Identity, which takes three consubstantial divine forms, has no place in materialist analysis.”

In less confident hands this approach might serve as an immediate stop sign for a reader who wants a quicker fix, a clearer understanding of how we identify ourselves now, and why it’s an impediment to a stable and peaceful future. Haider doesn’t waiver in his belief that race, gender, and class are abstractions and as a result immune from concrete definitions. Haider traces the idea of “identity politics” to the Combahee River Collective (CRC), a Boston-based black feminist movement that believed that by focusing on their own oppression, working from the inside out to empathize with the disenfranchised (economically, sexually, racially) they could best serve the needs of that demographic. The group in question would remain a swirling mix of radical black lesbians, poor white coal miners, Mexican migrant workers, and everything in between. They would work with each other while never abandoning their individual identity.

Early in Mistaken Identity, Haider concludes that he will focus solely on race as a determining factor, because of the abstract nature of everything else. Socialism is part of the black struggle against white supremacy. Rosa Parks got involved with the civil rights struggle through the Communist-organized defense of the “Scottsboro Boys“, nine black teenagers who were falsely accused and convicted of raping two Alabama girls. Later, in the ’60s, the Black Panthers believed that “…if you talked about racism without talking about capitalism, you weren’t taking about getting power into the hands of the people.” Booker T. Washington preached an entrepreneurial spirit and W.E.B. Dubois promoted building up “The Talented Tenth“.

Simply put, Haider feels that to “…demand inclusion in the structure of society as it is means forfeiting the possibility of change.” Haider proposes with Mistaken Identity that by critiquing identity politics he has no intention of deviating from the legacy of the CRC or even insulting it. Rather, he wants to deal with the “…contradictory reality that we cannot avoid confronting.” The mainstream women’s liberation movement was initially perceived as primarily white. The Occupy movement of 2011 brought class onto the agenda of identity. Liberal multiculturalism showed its distinct fragile nature a few years later with the growth of violence against the black community, even with a black family in the White House. The Black Lives Matter movement evolved without a clear division between class and race.

Haider’s criticism of “intersectionality”, first introduced into the lexicon in 1989 by Kimberle Crenshaw, “…had a precise and delimited meaning.” It’s a complicated theory that Haider effectively spells out here. In effect, “…single-issue frameworks would… marginal[ize] those whose identities exposed them to to other forms of subordination.” In effect, the more identities we can embrace, the more intersecting lines that can form the essence of our inner selves, the stronger claim we can make to being injured. For Haider, a Separatist ideology is about Separatism, and such an approach “…prevents the construction of unity among the marginalized, the kind… that could… overcome their marginalization.”

In Chapter Three, “Racial Ideology”, Haider notes that he is “…on lists of ‘white socialists’ who fail to take racism seriously…” It’s an interesting concept that Haider effectively illustrates the possibility that racism can be summarily dismissed while we still fall victim to the abstract ideological concept of race. He effectively tears down some elements of Peggy McIntosh’s famous article “White Privilege: Unpacking the Invisible Knapsack“. For Haider:

A political formation such as whiteness cannot be obtained by starting with an individual’s identity-the reduction of politics to the psychology of self.

Is this a political ideology centered on white guilt? Haider ascribes that to the Weathermen and Students for a Democratic Society (SDS) in the late ’60s. Even more interesting in this section is Haider’s claim that white supremacy (and the white race itself) was formed within the American transition to a purely capitalist society. Defining race certainly has a lot to do with how people got to the United States, why they got here, and what they were able to make of themselves within conditions of or beyond their control. He quotes Frederick Douglass, the great African-American orator of the 19th century, who found a temporary paradise during his time in Ireland:

I breathe, and lo! The chattel becomes a man… I meet nothing to remind me of my complexion.

Haider traces the fact that the Irish were able to rise above their subjugation once emigrating to the United States by immersing themselves into the white race. Haider notes: “…the process of becoming white meant that these previous racial categories were abolished and racialized groups like the Irish were progressively into the white race as a means of fortifying and intensifying the exploitation of black laborers.” It’s a compelling route taken by those of us who can trace our ancestry to such Europeans, and Haider understands it needs to be taken in order to reach the next stage.

Chapter Four, “Passing”, covers the unfortunate story of Rachel Dolezal, the woman who led the Spokane NAACP and identified as African-American. Philip Roth’s The Human Stain, I Married a Communist, and American Pastoral dealt with identity through racial and culturally religious means. Leroi Jones, later to become Amir Baraka, was the African-American geographical (New Jersey) counterpart to Roth, who grew from being a strict Black Nationalist to a man who grew to understand the class struggle. Of “passing” this idea that we can all sometimes slip between identities at will, Haider believes it’s a universal condition:

We are all Rachel Dolezal; the infinite regress of ‘checking your privilege’ will eventually unmask everyone as inauthentic… we are so deeply disturbed by passing… it is the dirty secret of the equation of identity with politics.

In Chapter Five, “Law And Order” ,Haider notes that the Thatcherism of the ’80s was so remarkable because it tied abstract economic philosophies to practical, functional purposes. How would the working class opposition to Thatcher, as embodied by the failure of the 1984-1985 miner’s strike, be organized? Bill Clinton’s rise to power in the United States by the end of the ’80s might have been somewhat left of center, but it wasn’t the progressivism as embodied by people like Bernie Sanders. Clinton might have seduced the young people by playing saxophone on The Arsenio Hall Show and writer Toni Morrison might have concluded he was “the first black president”, but Hillary Clinton (at the time) was still quick to label violent black youths as “superpredators”. The comment came back to haunt her decades later during her 2016 Presidential campaign. No matter how we choose to identify ourselves, how we might choose to pass in order to appease, the past (perhaps our truest selves) will always come back to haunt us.

By the time Haider reaches “Universality”, his final chapter, the ideas are effectively and fully realized. He writes: “Is it possible to go beyond the liberal paradigm of victimhood and the paradox of rights?” Later, he asserts that it remains possible to “…claim the legacy of this insurgent universality…” For Haider, the separate segments and isolated worlds in which we’ve secured ourselves serves no purpose. “Our world is in dire need of a new insurgent universality,” he writes. “What we lack is program, strategy, and tactics.” Haider doesn’t offer any conclusive solutions to our current state of identity politics, and Mistaken Identity barely covers the routinely vulgar identity politics Donald Trump and his minions brought to power and apparently plan to maintain. Instead, Haider has written a brief and informed survey and critique of the inherent flaws in Identity Politics. It convinces the reader through a measured calm, not polemics, and that’s a refreshing change in these troubled times.